This week on Twisted History, Vibbs and I ponder the possible cancellations of Vikings, Buccaneers, Raiders, and Pirates... Strictly based on their Christopher-Columbus-like pasts.

And we highlight one pirate in particular- Welsh sailor Sir Henry Morgan.

Morgan was what’s known as a “privateer," which essentially means that he did all the things a pirate does, but his robbing and pillaging escapades were sanctioned by some government.

In 1655 he was a member of the expedition that seized Jamaica from the Spanish & converted it into an English colony.

He spent years pillaging off the coast of South America and through the Caribbean… Murdering 100s and implementing widespread torture in several of the towns his men captured.

In 1671, he defeated a large Spanish force and entered the city of Panama, which burned to the fucking ground while his men were looting and raping everything that moved... BUT Morgan’s raid on Panamá had taken place after the conclusion of a peace treaty between England and Spain, so he was consequently arrested and transported to London where he was thrown in prison.

In 1674, relations with Spain deteriorated, and King Charles II pardoned, knighted and sent Morgan out as the new deputy governor of sunny Jamaica, where he lived as a wealthy and respected slave-owning farmer until he died in 1688 from cirrhosis of the liver.

Fast-forward to 1944, when the Seagrams company needed a way to make their new rum brand stand out. They hired an artist to create a cartoon likeness of this famous pirate, and the rest is now twisted history.

"They'll come for our butter, syrup, and football teams, but they'll never take our booze!"… I guess.

Anyhoo… Listen up, and enjoy.

Speaking of making bad decisions with rum, the good people over at Gosling's Rum are hosting a rum tasting in preparation for National Rum Day on this week's Gentleman's Friday… 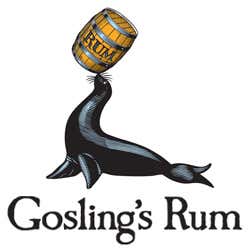 Tune into Barstool Breakfast from 8-10 AM to learn why I have the most fabulous job in the world, and why I use a car service once a week.
Giphy Images.