From The Notes, The Twisted History of Cocktails:

Before we get to famous bartenders and cocktails, I gotta take a small left turn because I want to mention a guy that I think everyone should know more about. 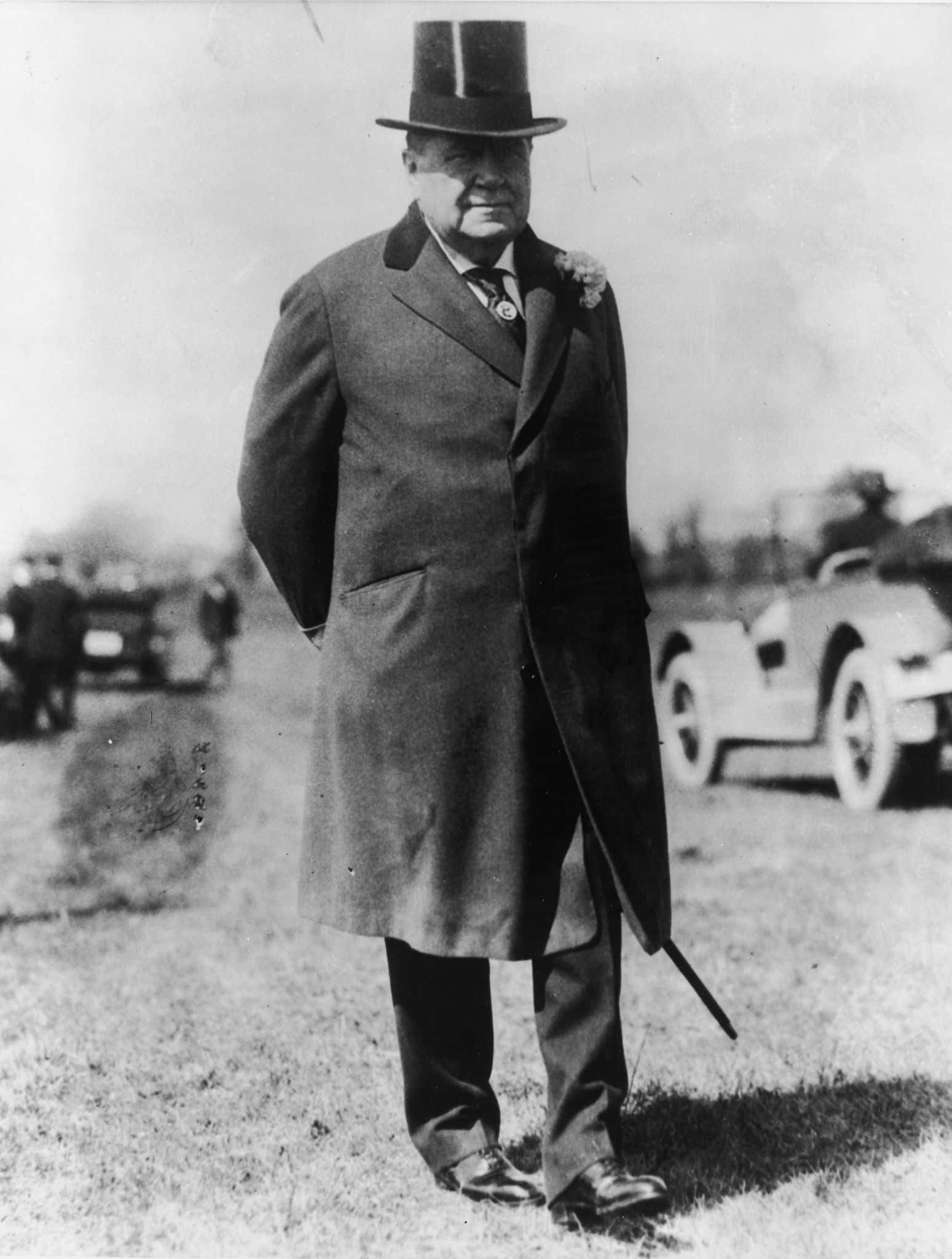 He was born in New York City in 1856 to an Irish immigrant family, and his dad was a saloon owner. He had a lucrative career as a railroad-car builder, and made shrewd moves on Wall Street that garnered him a fortune reported to be north of $12 million. With that enormous wealth came a penchant for diamonds. Some reports said he owned more than 27,000 of them, including 31 curated sets—one for each day of the month.

He owned a notable stable of racehorses, which included champions "Gold Heels," who set a world record for 1¼ miles, and "Accountant," the three-year-old champion in 1906. 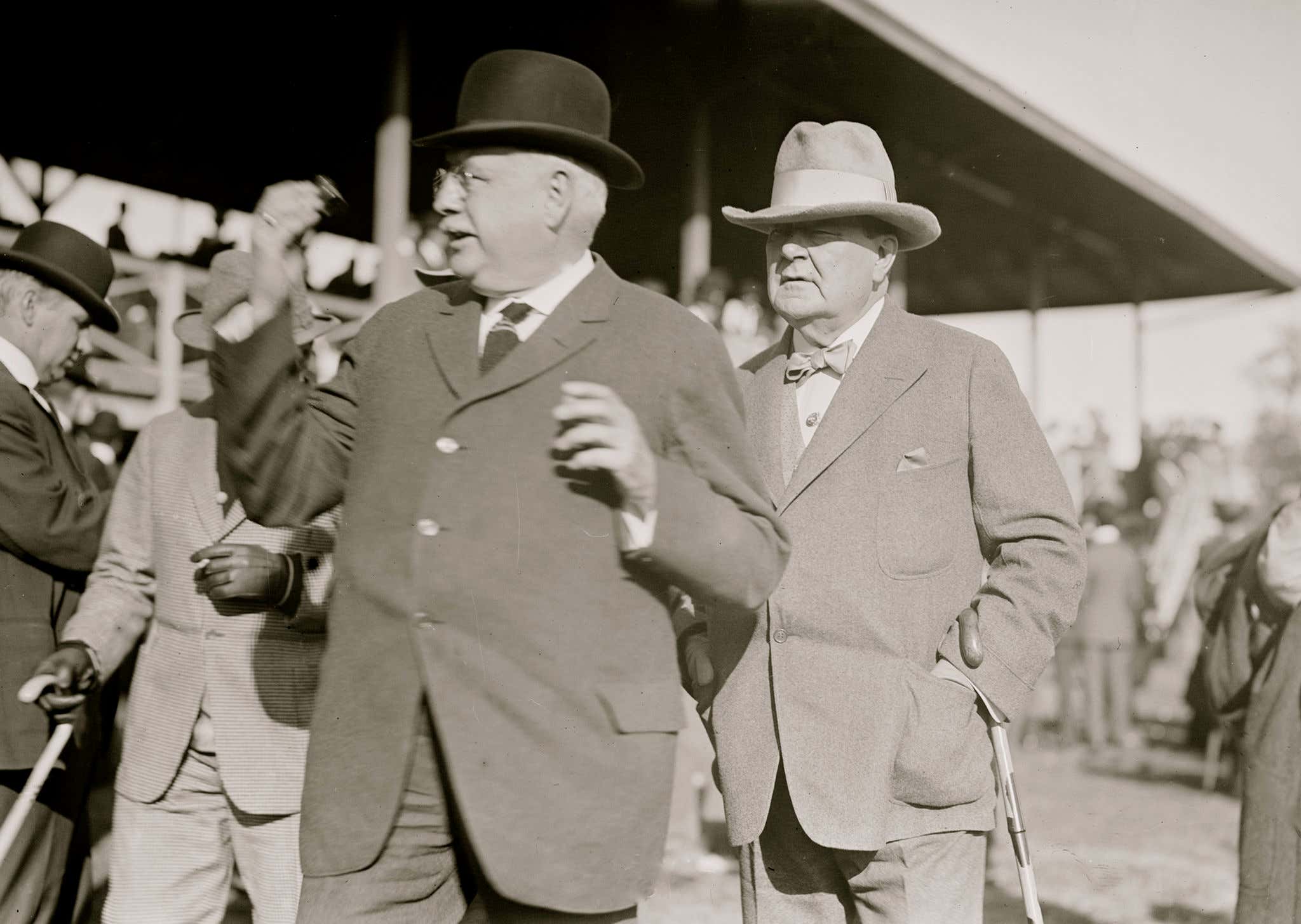 Stories of his appetite are LEGENDARY.

A typical lunch consisted of two lobsters, deviled crabs, clams, oysters, and beef, then he finished with "several" whole pies.

Dinner included a couple dozen oysters, two whole ducks, a sirloin steak, two servings of terrapin (I think that's turtle), and a variety of vegetables. Because Jim did not drink any alcohol, all this was washed down with a carafe of orange juice.

Restaurant owner George Rector said this about Brady, because he ate so much- "He was the best 25 customers I ever had.”

Brady died of a heart attack in 1917 at the age of 60. When his body was examined, doctors discovered that his stomach was six times the size of an average person.

Brady donated a significant sum in 1912 to Johns Hopkins Hospital in Baltimore, Maryland (where he had once been treated) and the hospital created the James Buchanan Brady Urological Institute in his honor. Part of his estate was distributed to New York–Presbyterian Hospital, and the department of urology is named for the James Buchanan Brady Foundation.

He was also known for being the first person in New York City to own an automobile (in 1895).

Brady inspired Monty Python's Flying Circus to create the fictional character Mr. Creosote who appears in the troupe's sketch comedy film The Meaning of Life (1983). He is a monstrously obese, rude restaurant patron, who is served a vast amount of food and alcohol whilst vomiting repeatedly. After being persuaded to eat an after-dinner mint – "It's only wafer-thin" – he explodes in a very graphic way.

Here is the full scene: 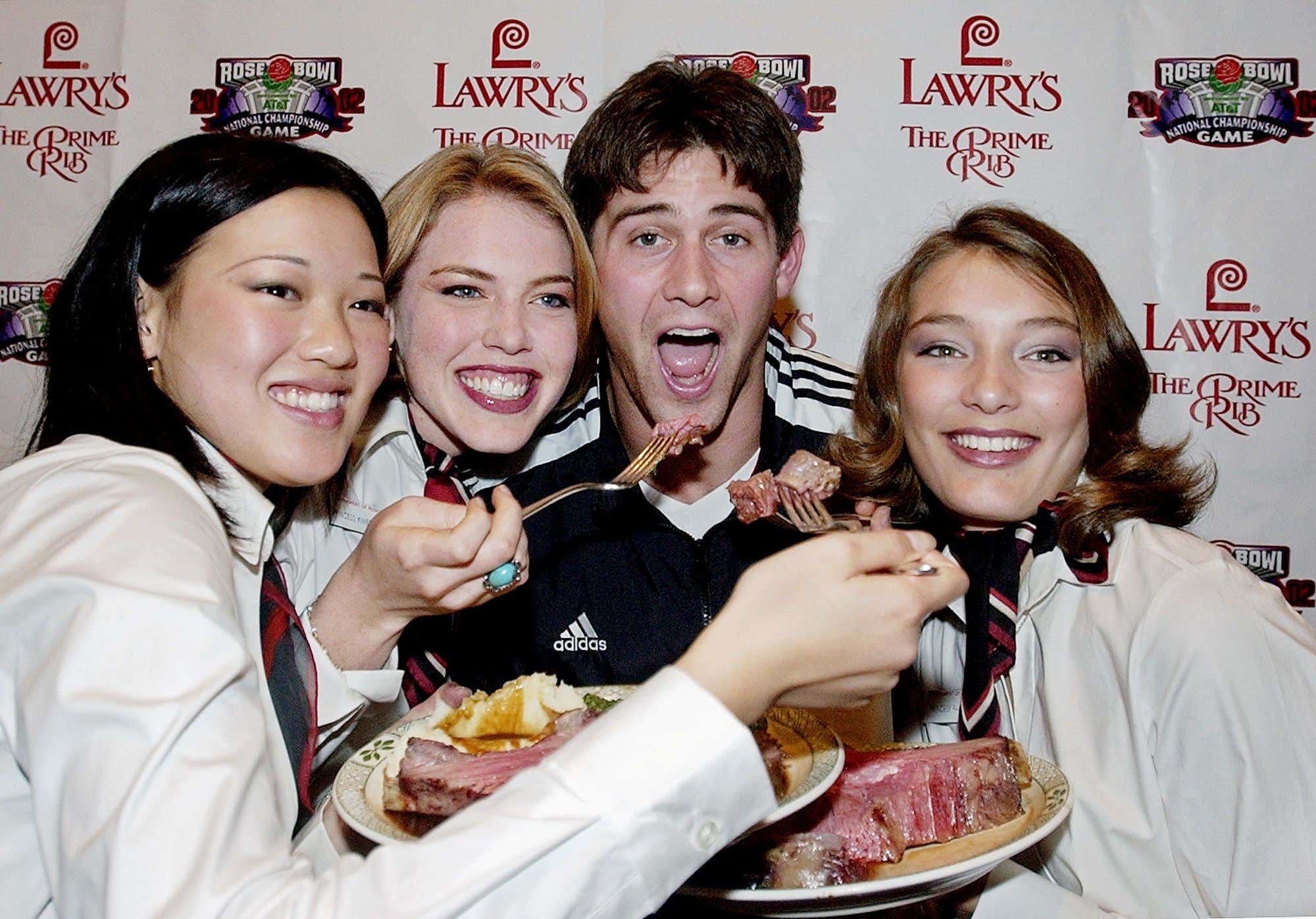 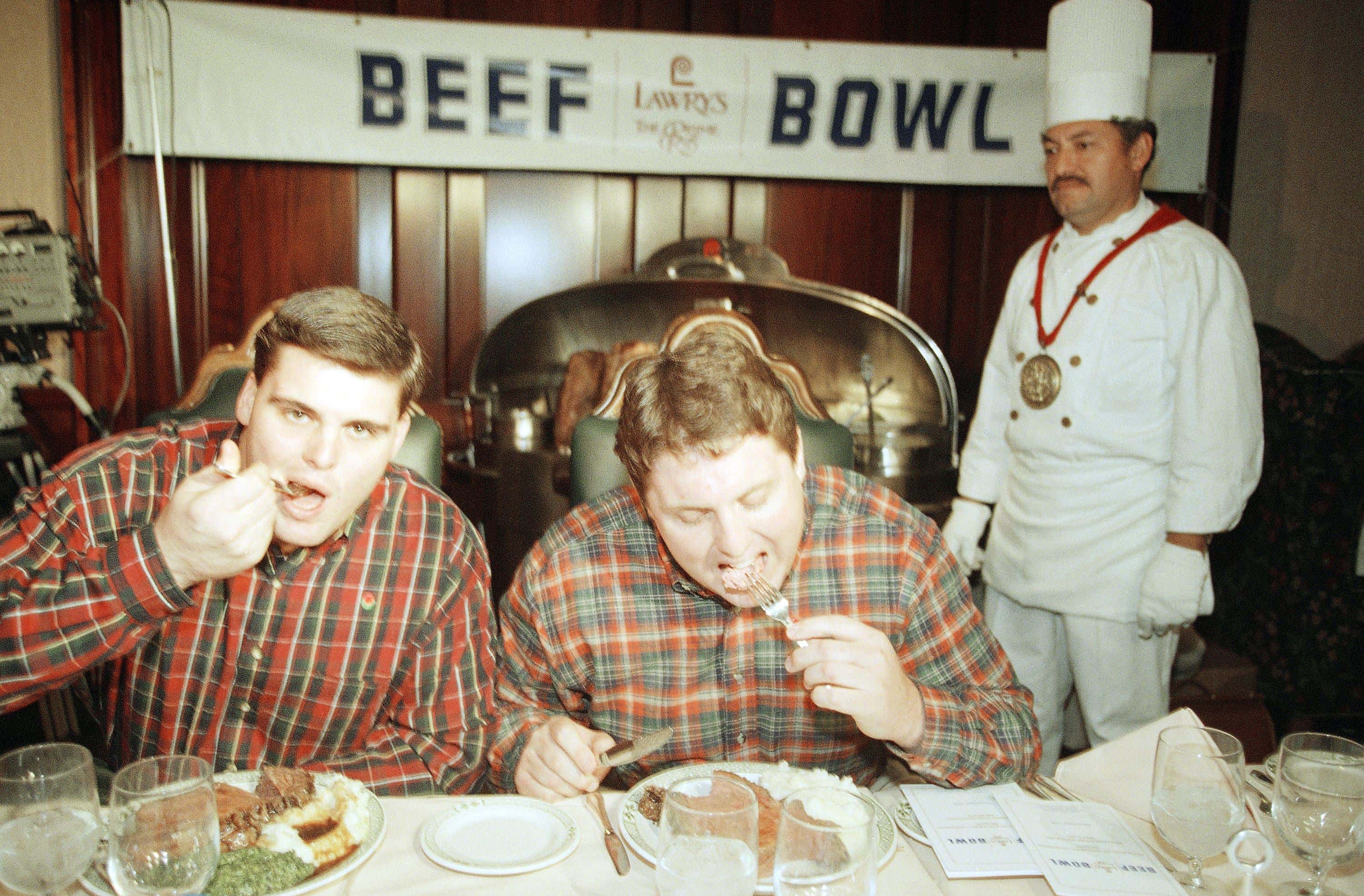 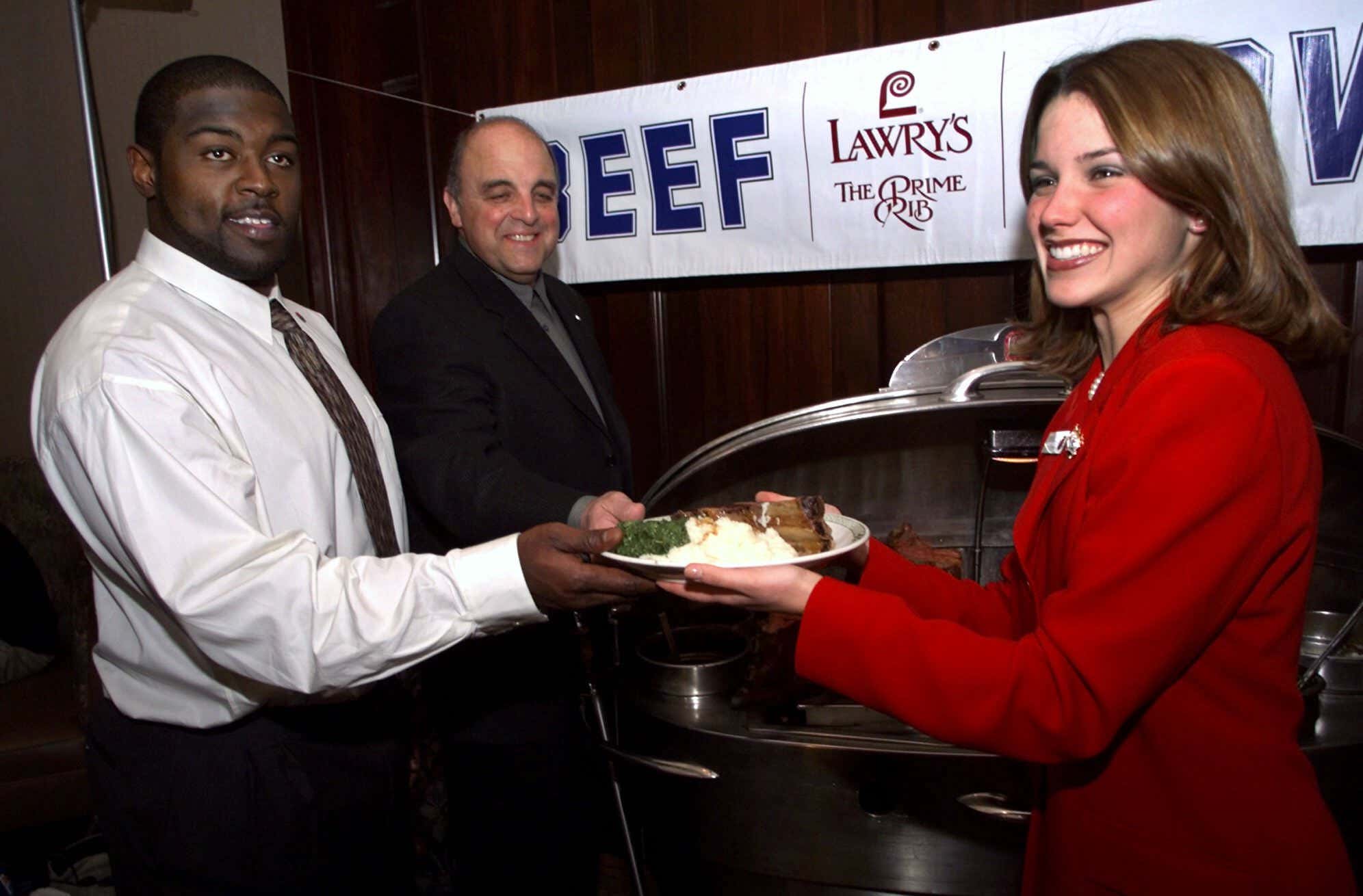 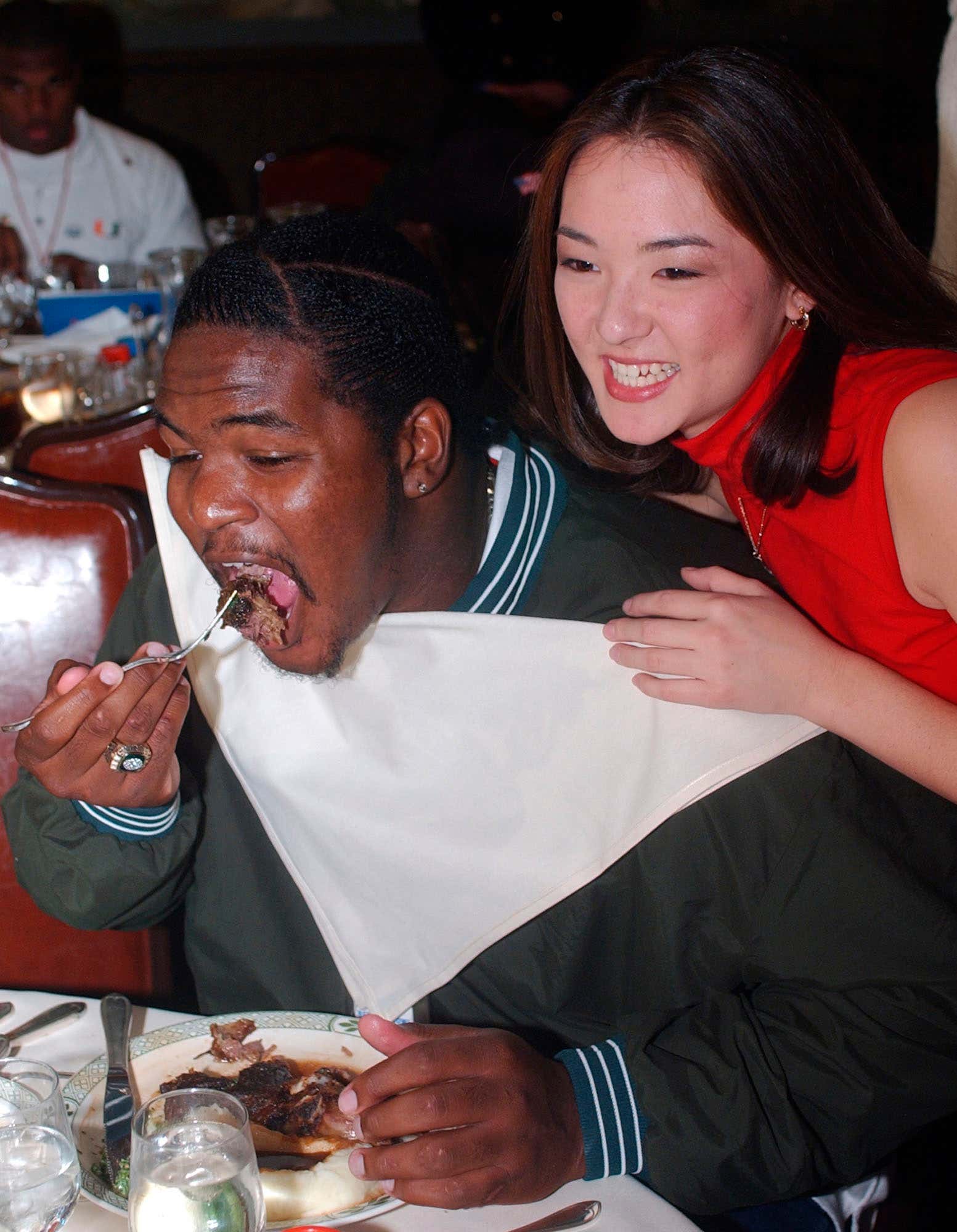 Both teams playing in the Rose Bowl are invited to participate. The first one in 1957 was Oregon vs Iowa.

The restaurant hosts each team on separate nights, and each team is allowed to bring up to 145 people. Players are limited to two, 22 oz. bone-in servings of prime rib during their team’s respective dinner, and players from Purdue hold the record for consuming the greatest amount of prime rib: 734 pounds prior to the 2001 Rose Bowl Game.

Outside of the Rose Bowl, Since 1983, Lawry’s has also hosted Beef Bowl events for each team playing in the Cotton Bowl. Lawry’s pays for each Beef Bowl attendee’s meal, and it costs $22,000 to host each team at every Beef Bowl function.

They also have a spinning salad, so if you ever go to a Lawry's, make sure you get it. Kinda cheesy, but it's something I don't think you knew about before I just told you.