Twenty-one years ago, the internet was in its infancy... Kinda... And the general public (me) had no clue how much deception lay within.

Case in point: I was sitting at my desk at Citigroup minding my own business, trying to drum up a way to fuck people out of money so my bosses could take all the credit and make enough money to buy another boat.

When, all of a sudden, I received a Bloomberg message from a friend containing this image... 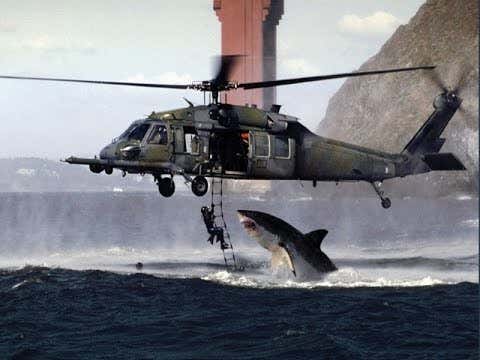 Along with the picture, came this description…

A great white shark leaping out of the ocean and attacking a military helicopter near the South African coast during a British Navy military maneuver.

That description contained three things I knew very little about- Sharks, South Africa, and military maneuvers, so I was skeptical at first.

But then the text went on and read…

This photo was National Geographic's "Photo of the Year”.

I immediately forwarded the picture to 30 people on my contact list, and I believe we were all equally fascinated by the scene it portrayed… But not one of us thought to question its validity.

In 2001, Google was only 2+ years old and was probably the fourth or fifth most used search engine behind Yahoo!, MSN, AOL, and perhaps Ask Jeeves… And Wikipedia was just launched that January, so it only contained a handful of entries.

Plus, we still had a degree of wide-eyed innocence back then, so if a cool little pic like this came across our faces…

… we took them as gospel.

I never thought of the image again, until this week, when I started to research some of history's biggest hoaxes for the latest episode of Twisted History.  In my research, I learned about the Shroud of Turin, Baloon Boy, The Cardiff Giant, Hitler's Diaries, and of some still unknown prankster who merged a photo of a breaching great white (taken by South African photographer Charles Maxwell), with a photo of a U.S. Air Force helicopter hovering near the Golden Gate Bridge (shot by Lance Cheung).

After reading this revelation, I quickly looked back at this picture and although I would never be able to distinguish between a British versus US chopper, I could clearly see the Golden Gate Bridge featured prominently in the background.

Then I read that National Geographic published an article in 2005 exposing the hoax noting the shot was never its "Photo of the Year," and it was at that point that I truly felt like a moron.

I made the mistake of mentioning my gullibility this week to the 3 infallible brain trusts I record the show with and I got dragged for it… Luckily I had a couple of old issues of Nat Geo at home so I was able to self-medicate to some familiar members of Nigeria's Komba tribe.

(That's a young Jason Statham… Or is it?)

Don't believe everything that you read, and watch/listen to the Twisted History of Hoaxes.