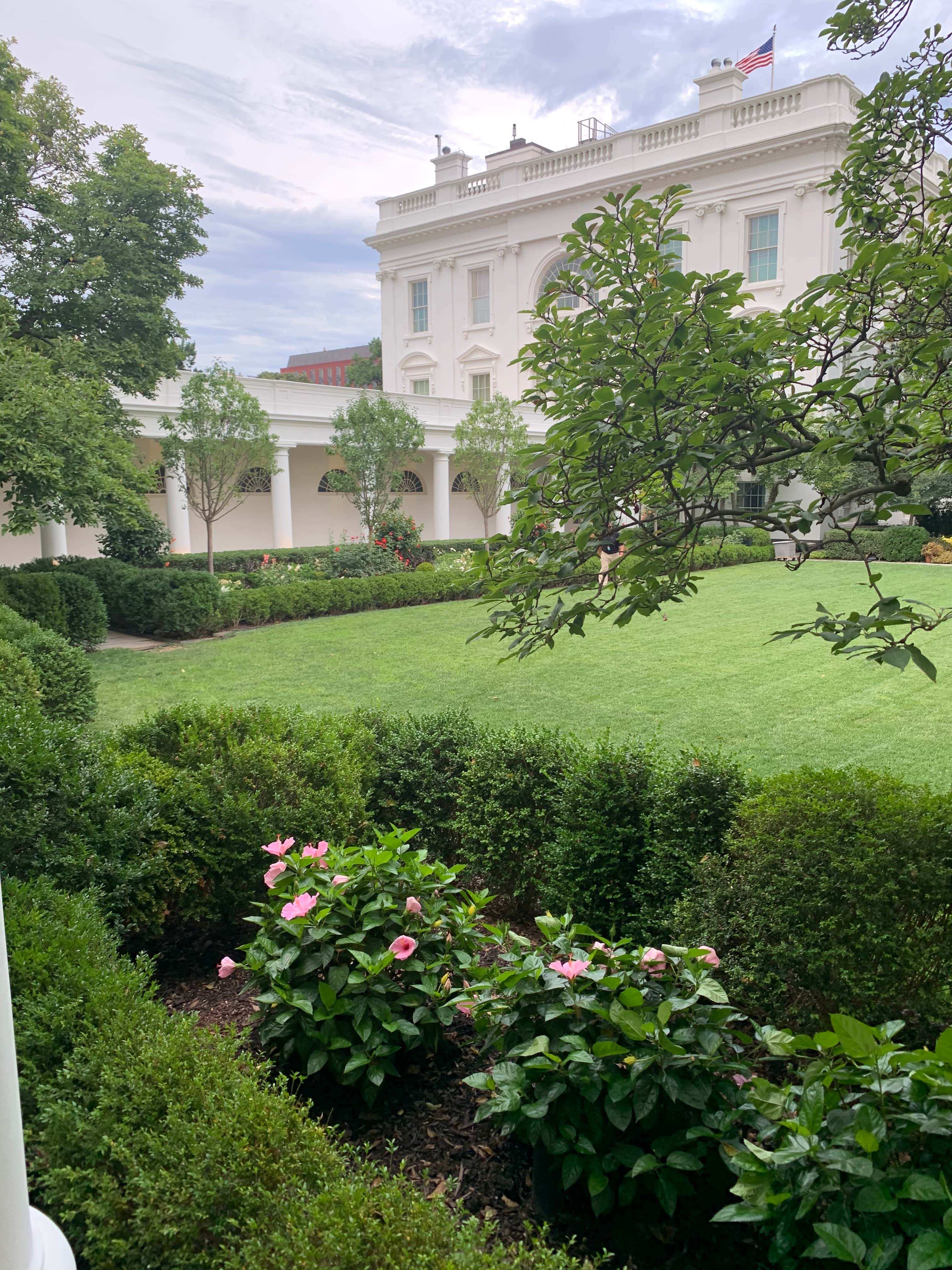 I was sitting on my couch last Wednesday afternoon, when I get a phone call from Frankie Borrelli.

He says to me: "I have something pretty crazy that just came up, can you be in Washington D.C. to shoot an interview tomorrow afternoon? I responded, "Yea, what is it? Who you got?"

We talk some more and then hang up. I immediately texted Frankie: "Is this Tommy Smokes prank calling again?"

After gathering equipment at the office, I drove down to D.C. and met Dave, Erika, and Frankie. We were picked up by Secret Service, and driven up to an outer security checkpoint. That's the Eisenhower Executive Office Building in the background, where we would spend the next few hours before the interview: 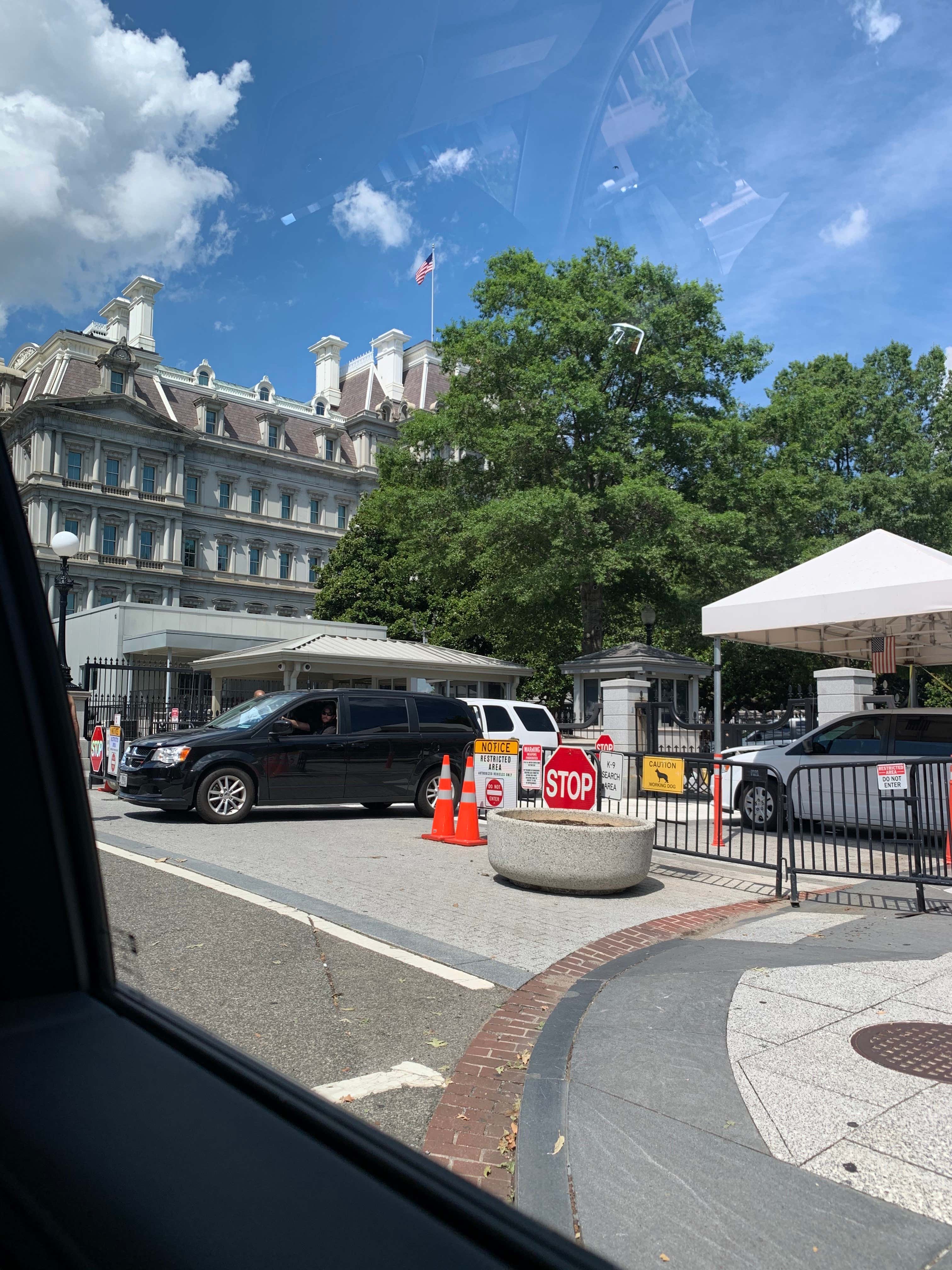 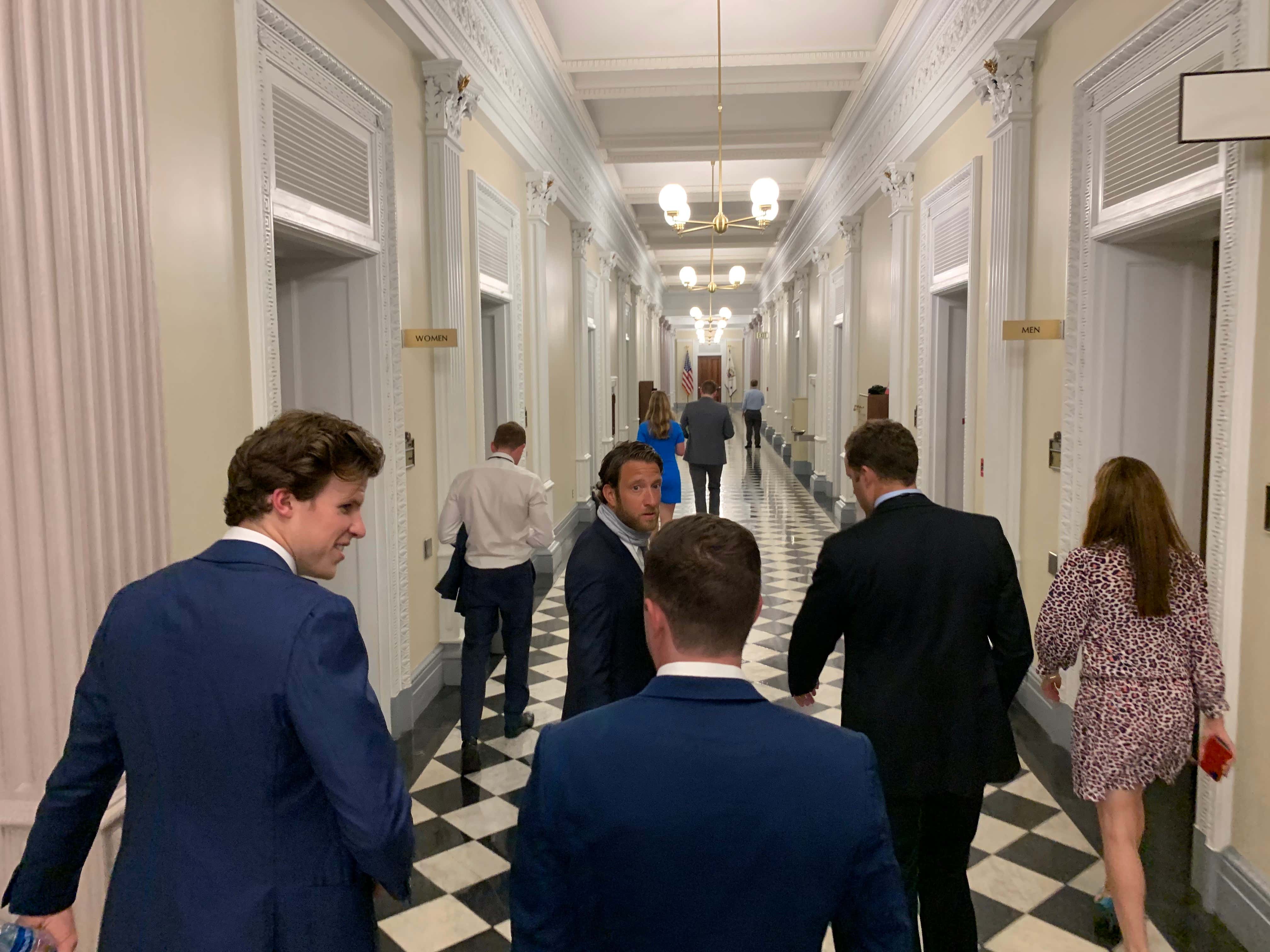 Twisted History fact: When first built, it was generally regarded with scorn and disdain. It was referred to by Mark Twain as "the ugliest building in America." President Harry S. Truman called it "the greatest monstrosity in America." Historian Henry Adams called it Mullett's “architectural infant asylum.” - The architect, Alfred B. Mullett, wound up ending his life by suicide.

I've never been to an infant asylum, but it's actually a gorgeous building: 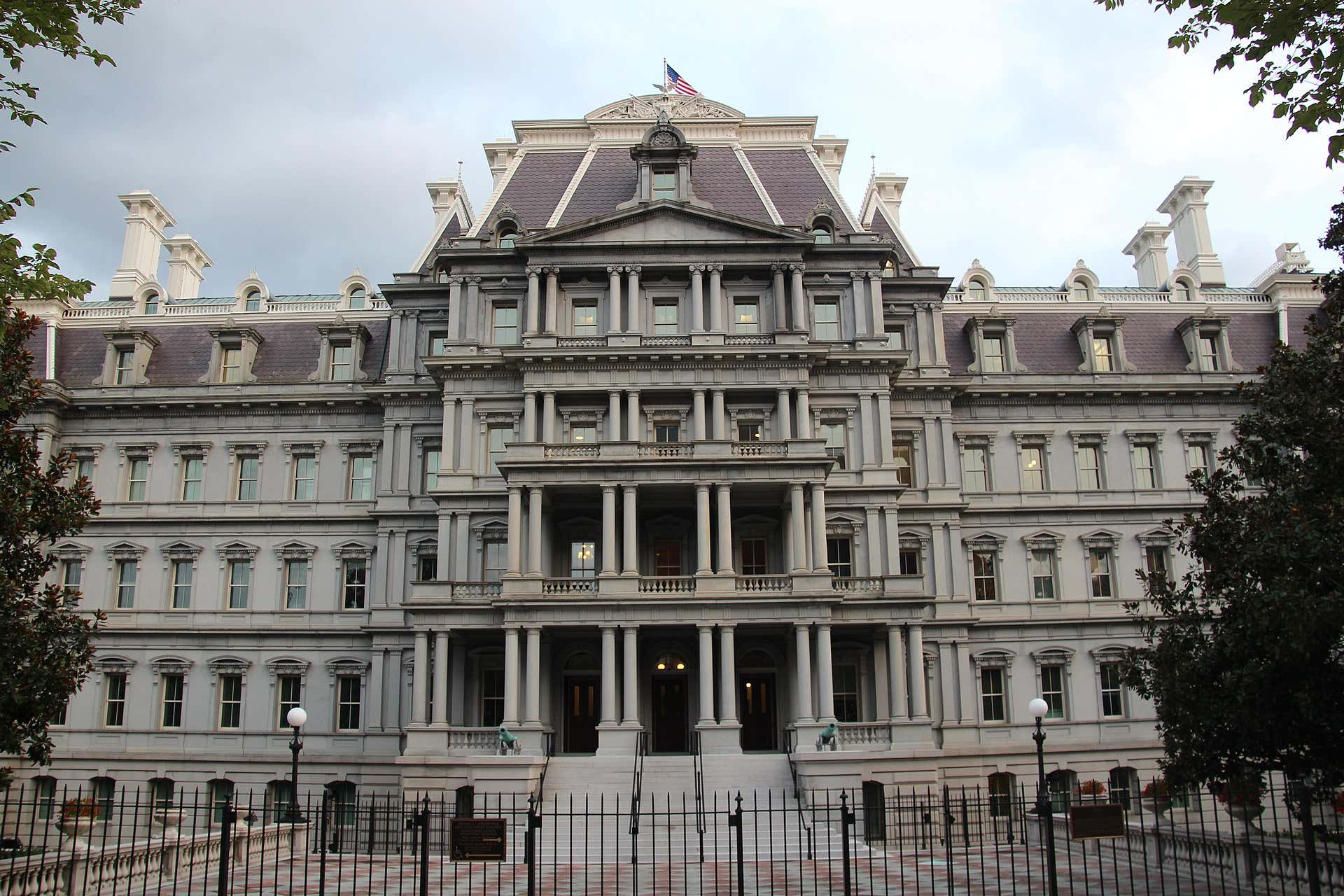 Many of our most celebrated national figures have participated in historical events that have taken place within the EEOB’s granite walls. Theodore and Franklin D. Roosevelt, William Howard Taft, Dwight D. Eisenhower, Lyndon B. Johnson, Gerald Ford, and George H. W. Bush all had offices in this building before becoming President. Winston Churchill once walked its hallowed halls, and Japanese emissaries met here with Secretary of State Cordell Hull after the bombing of Pearl Harbor. President Herbert Hoover occupied the Secretary of Navy’s office for a few months following a fire in the Oval Office on Christmas Eve 1929.

The Vice President's Ceremonial Office, in The Secretary of War Suite 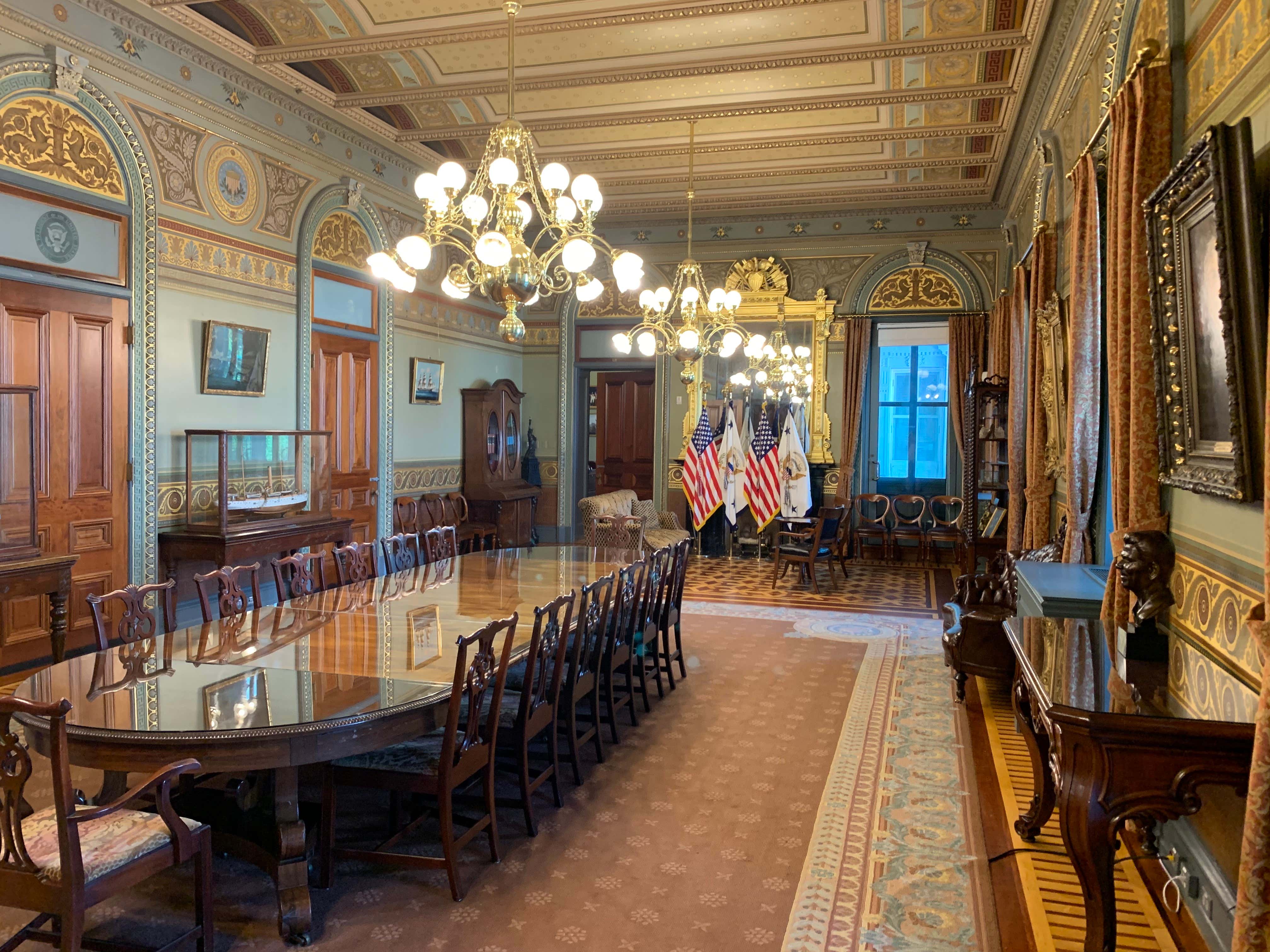 Since 1960, it has been used as the Vice President's Ceremonial Office. It houses the Teddy Roosevelt desk, which was built in 1903, and is one of only six desks to have been used by U.S. presidents in the Oval Office. 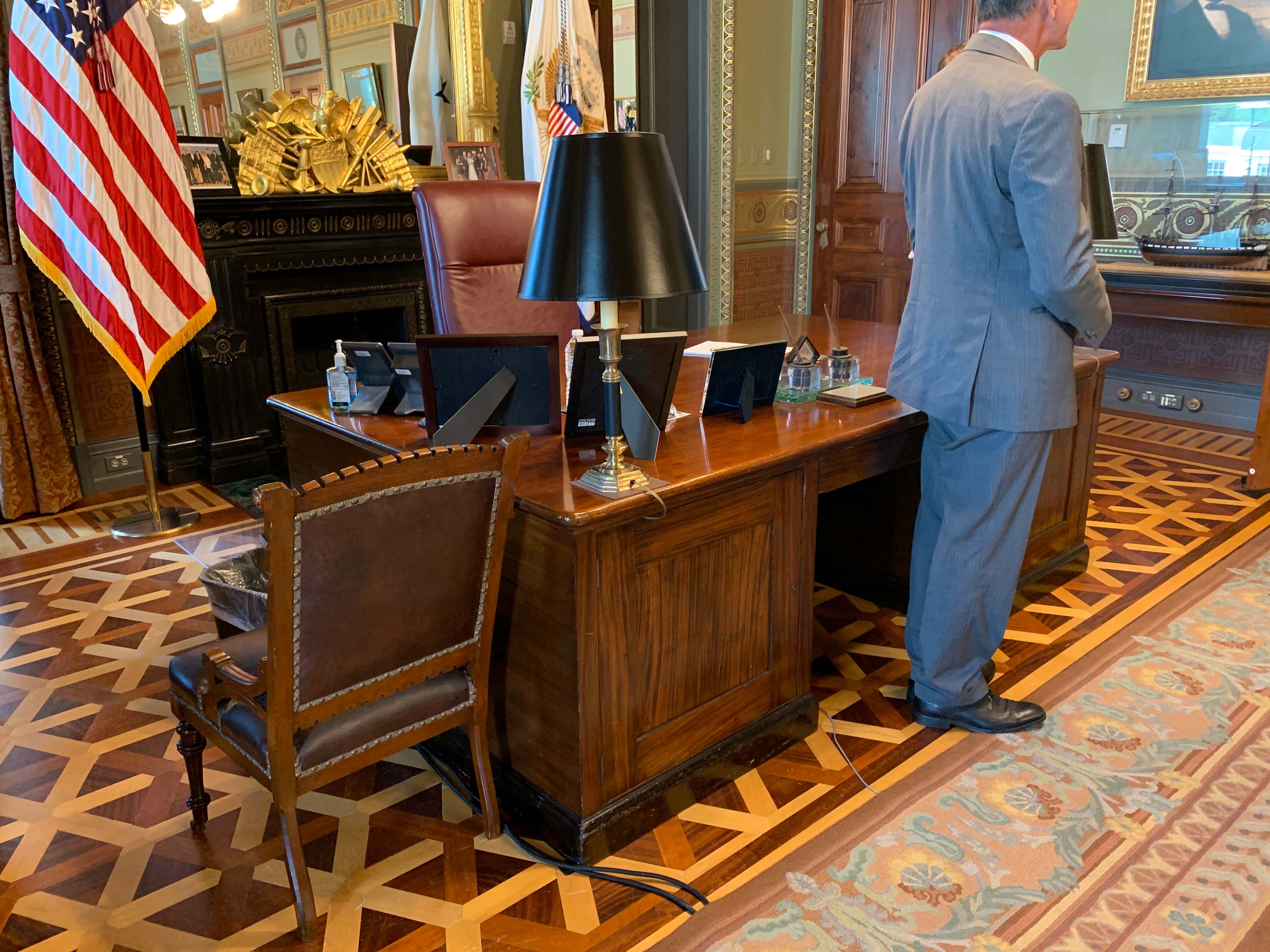 The desk is part of the White House collection, and was commissioned to be built for Theodore Roosevelt's use in the Oval Office. Several important figures have used the desk including Presidents Taft, Wilson, Harding, Coolidge, and for a few months, Hoover. Vice President Johnson and all subsequent Vice Presidents (except Hubert Humphrey) have used the desk. Since the 1940s, the top drawer has been signed by Vice Presidents Cheney, Gore, Quayle, Mondale, and Rockefeller; and Presidents Truman and Eisenhower: 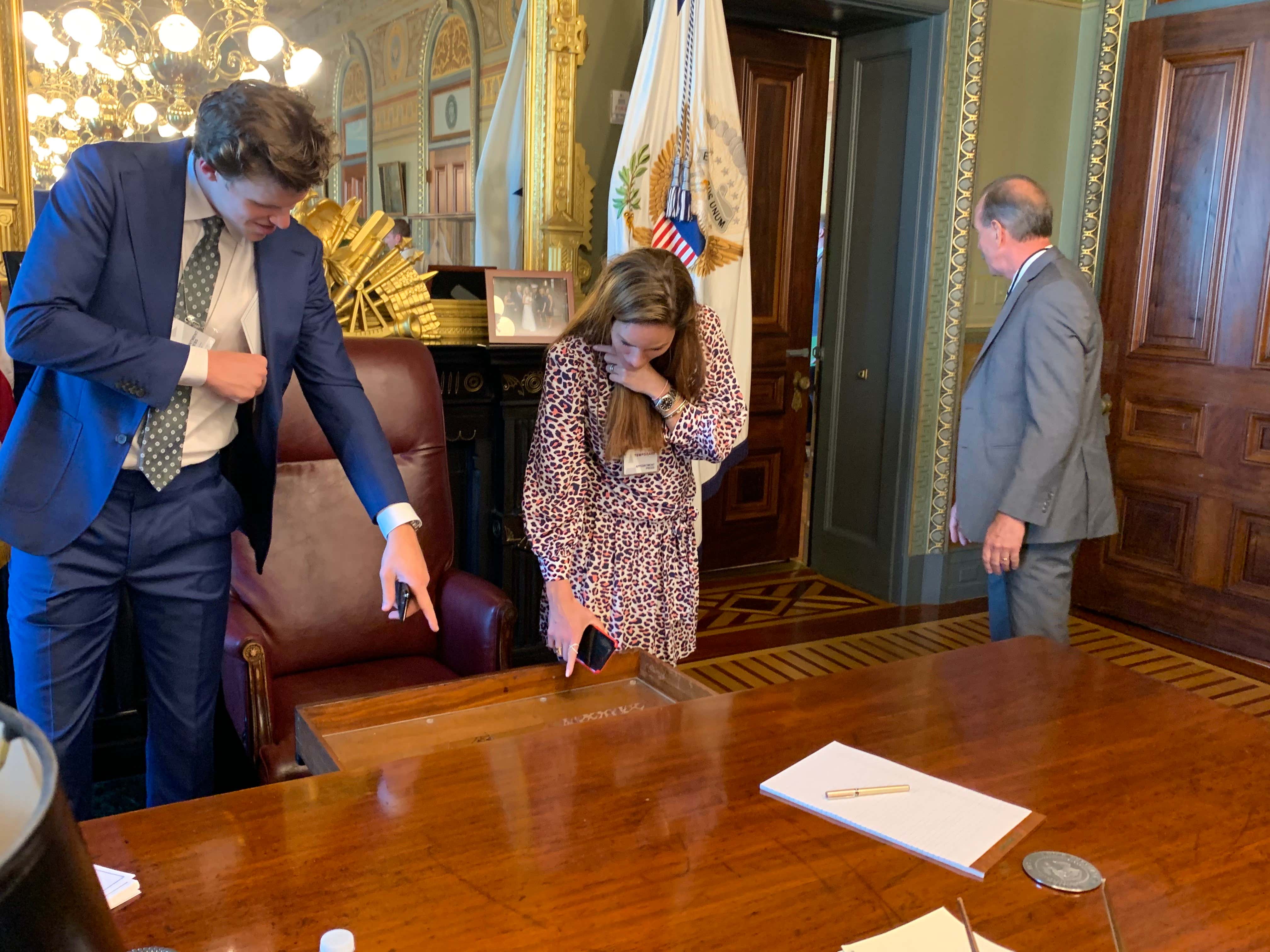 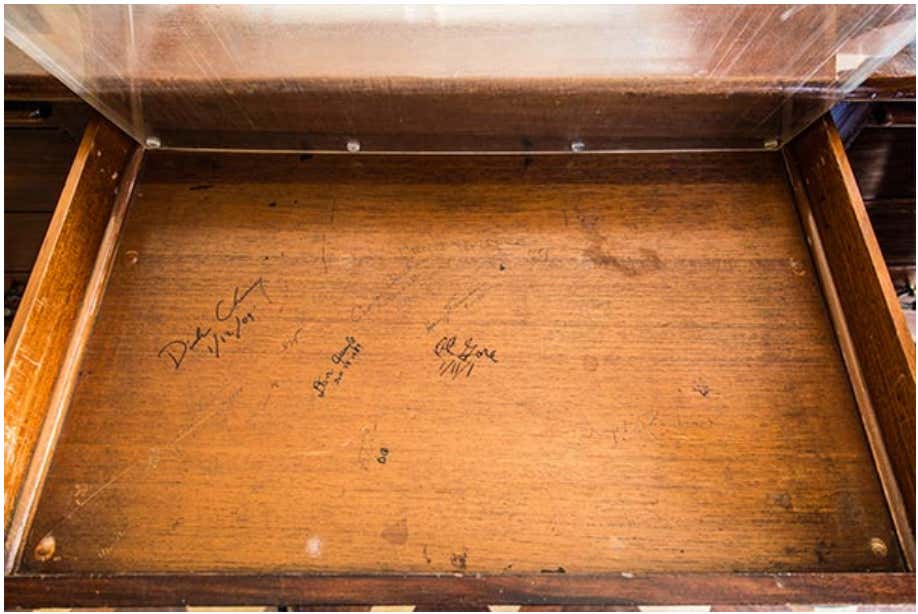 By the way, how do I know all this? We had an extremely knowledgeable historian giving us a tour, who knew absolutely everything there was to know about this room. I'm terrible with names, but thank you to this guy: 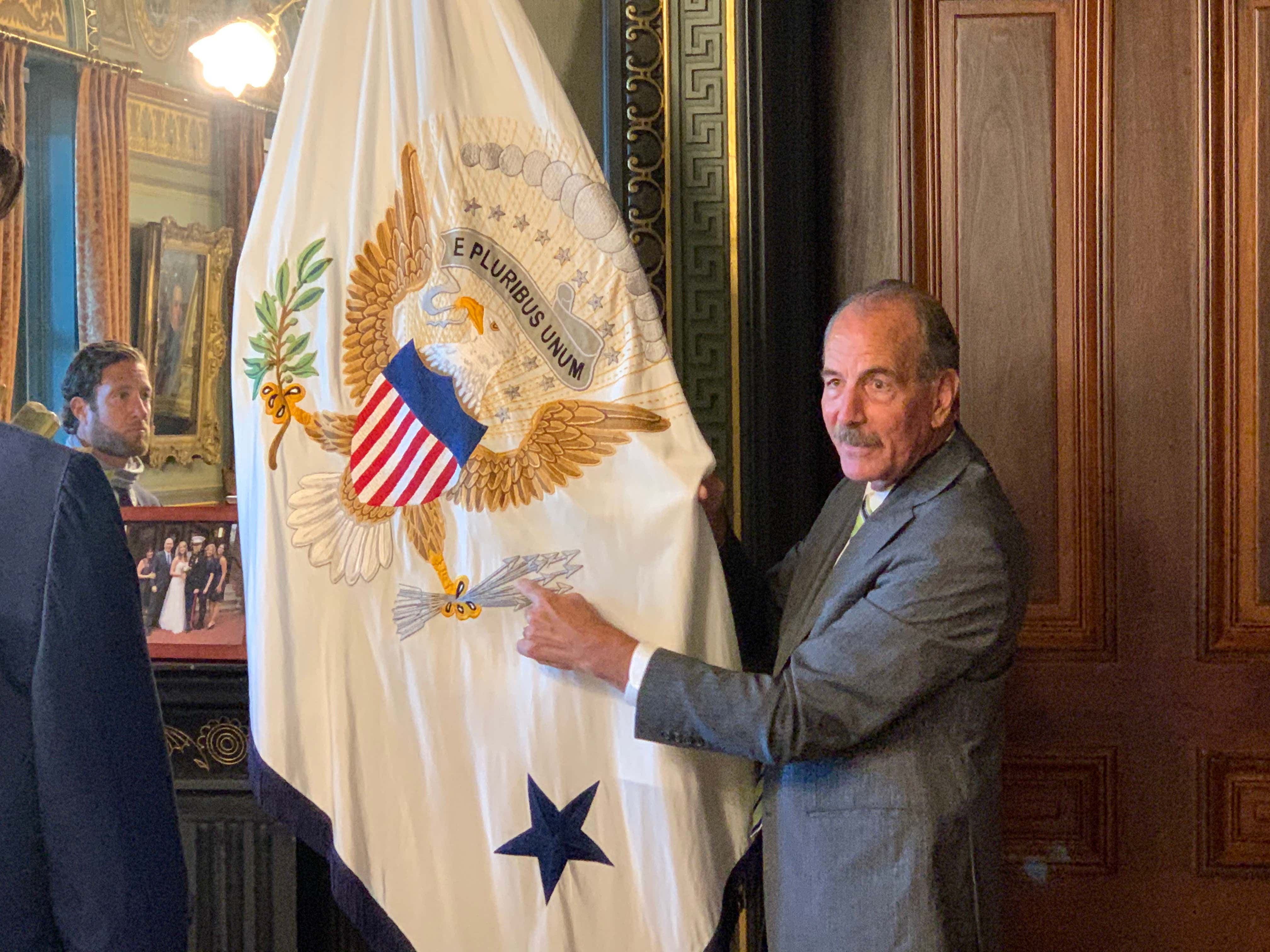 In that same room, this is where ambassadors are often sworn in: 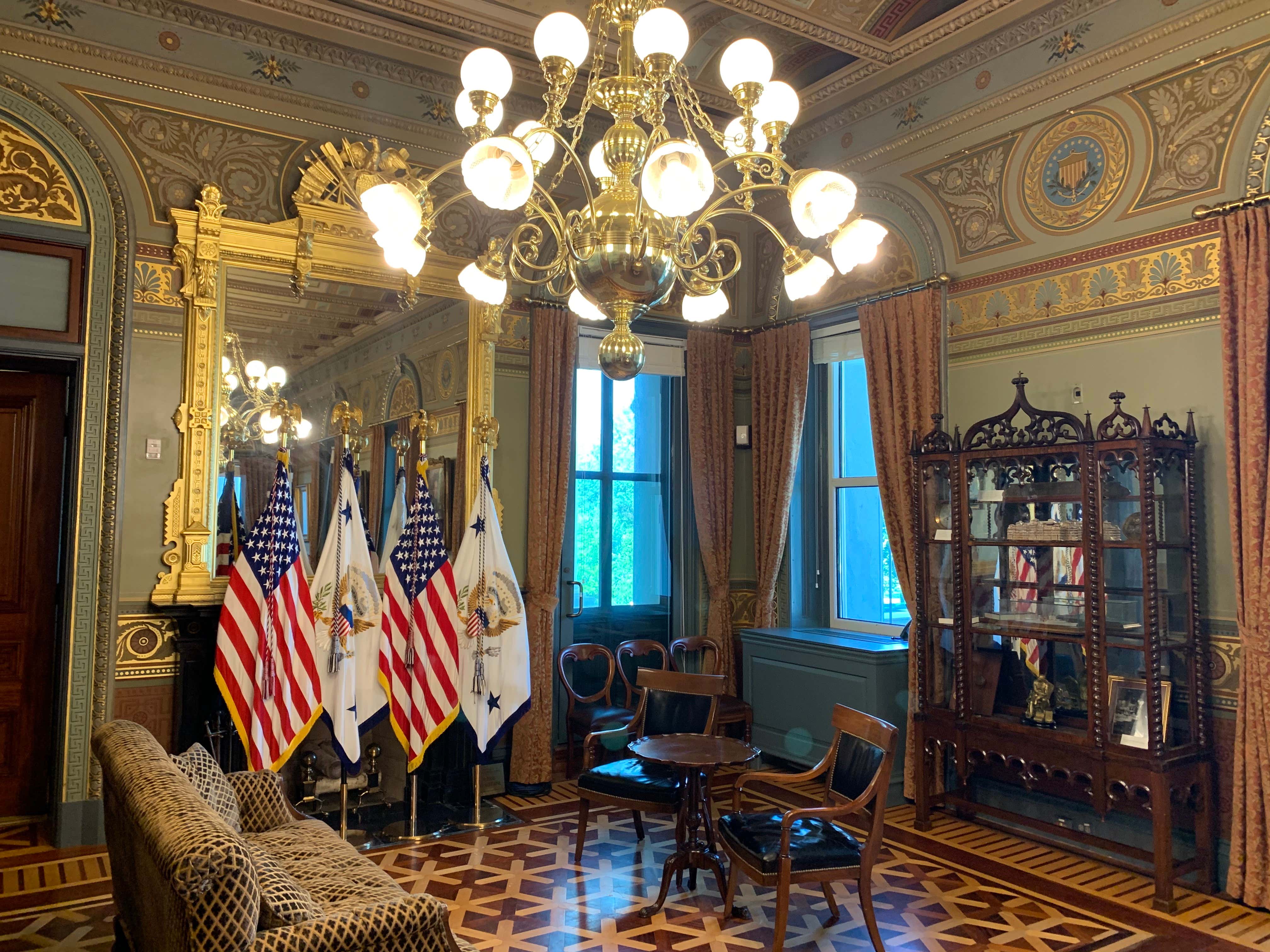 You also get an unreal view of the White House, and probably my favorite photo: 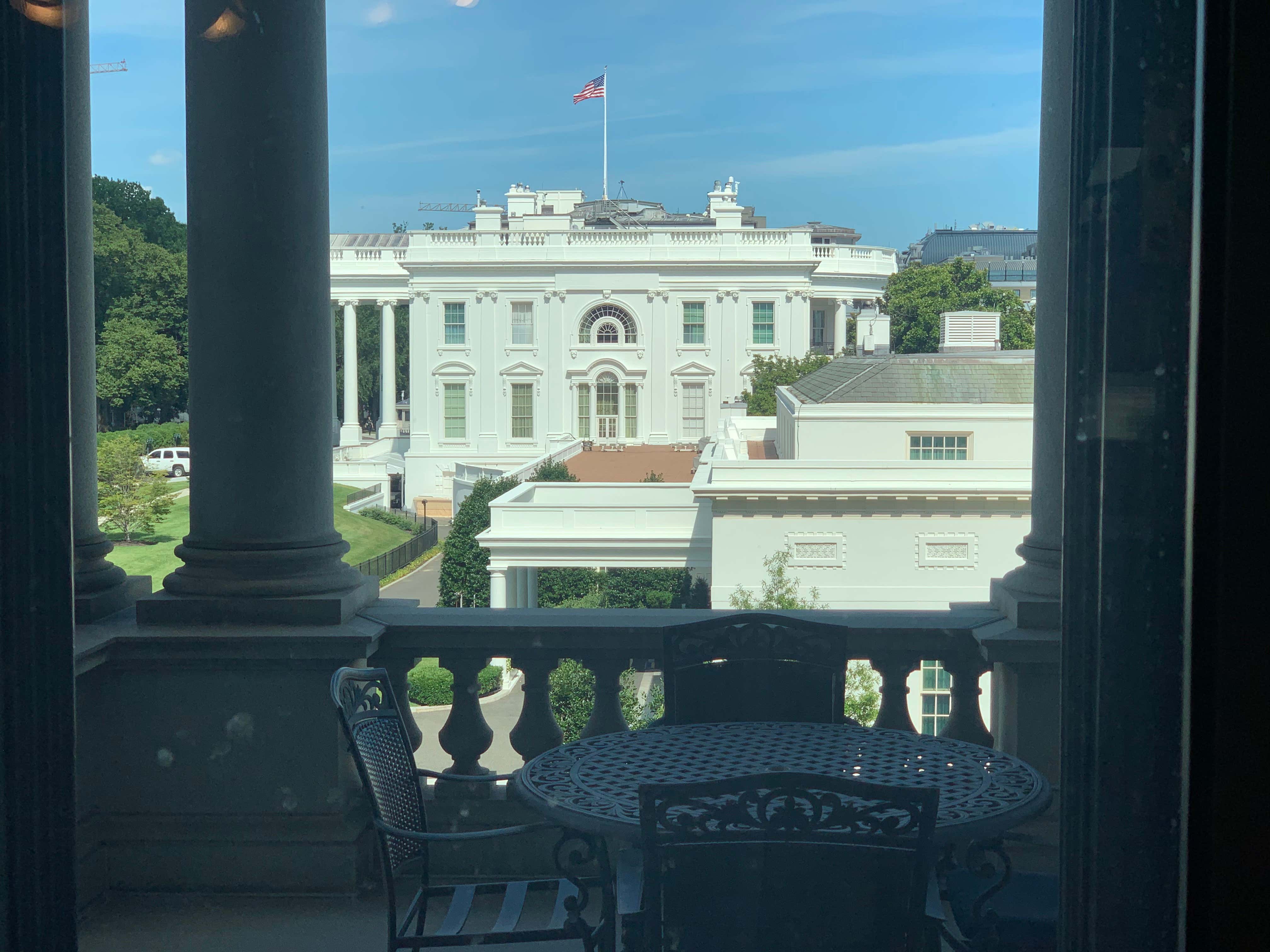 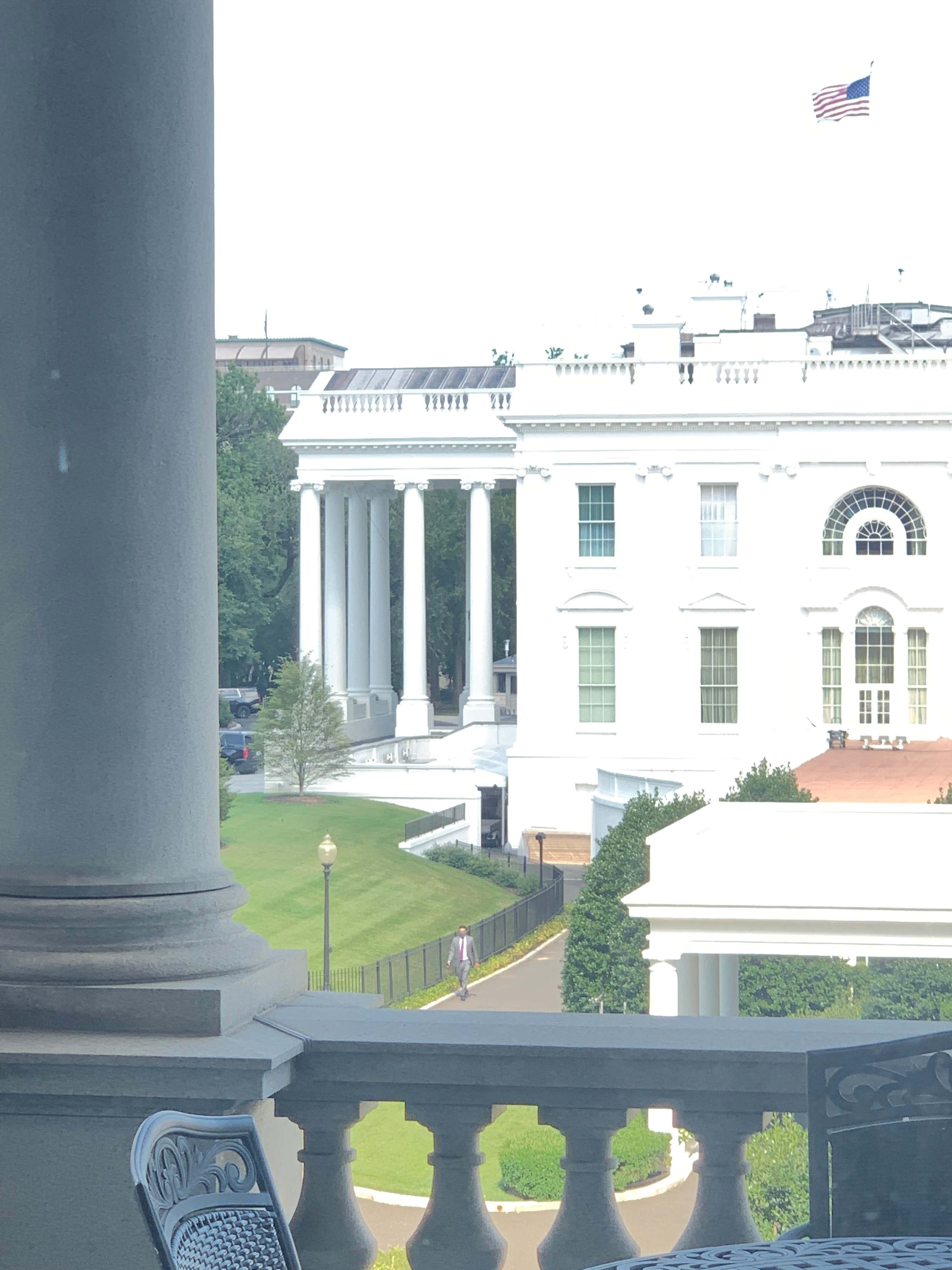 At this point, we were about an hour and a half away from the interview with Trump. We got our Covid-19 test results (negative) and walked out of The Eisenhower Executive Office Building and into the front entrance of The White House. Dave then got to meet Yankee legend Mariano Rivera: 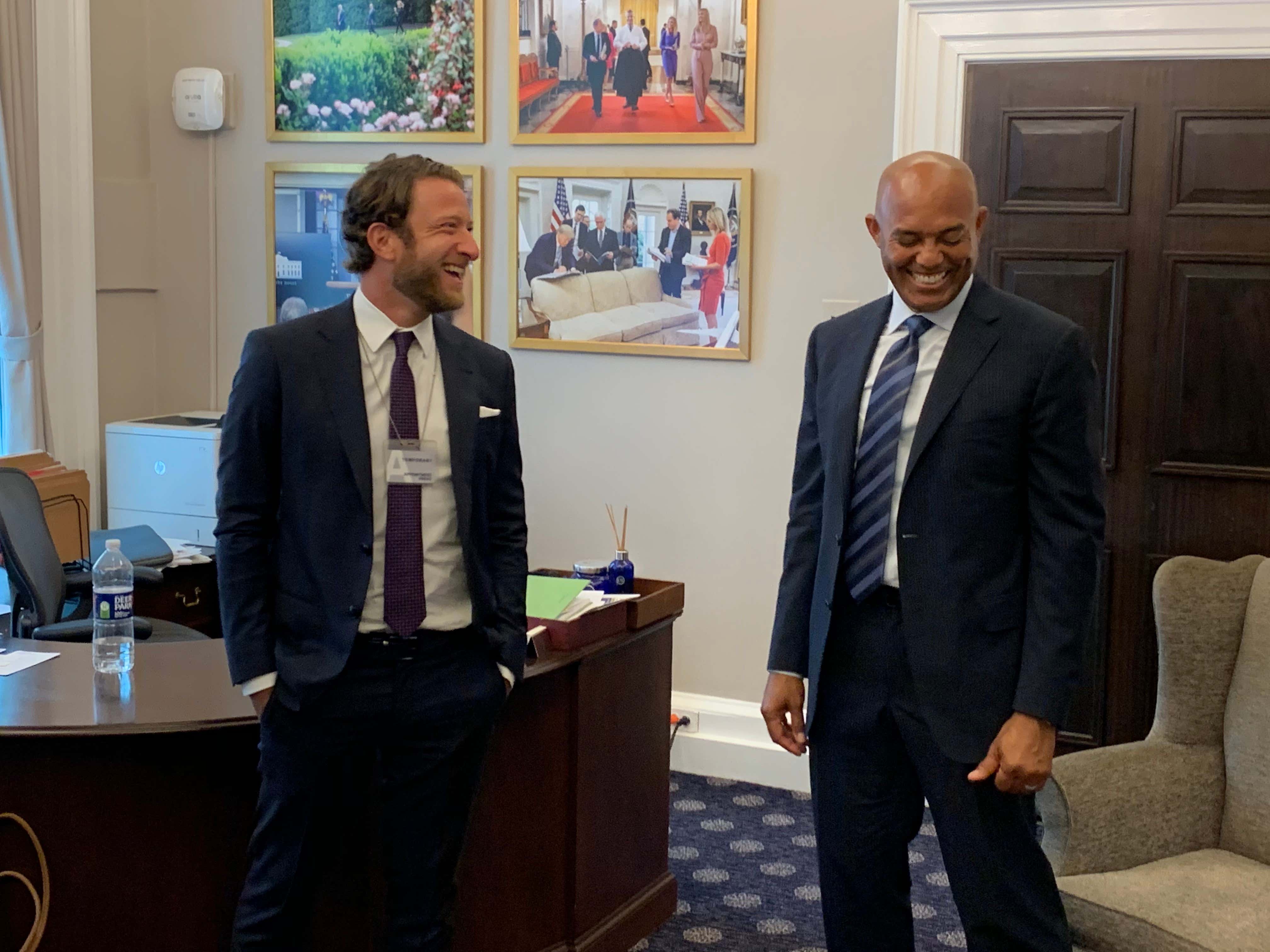 They told Frankie and I we would get about an hour to setup, and that it would be inside The Oval Office! I googled "oval office interviews" to see what one looked like. At the very last second, the plan changed, and they put us on the patio out in The Rose Garden, behind The Oval Office. Still ...pretty amazing: 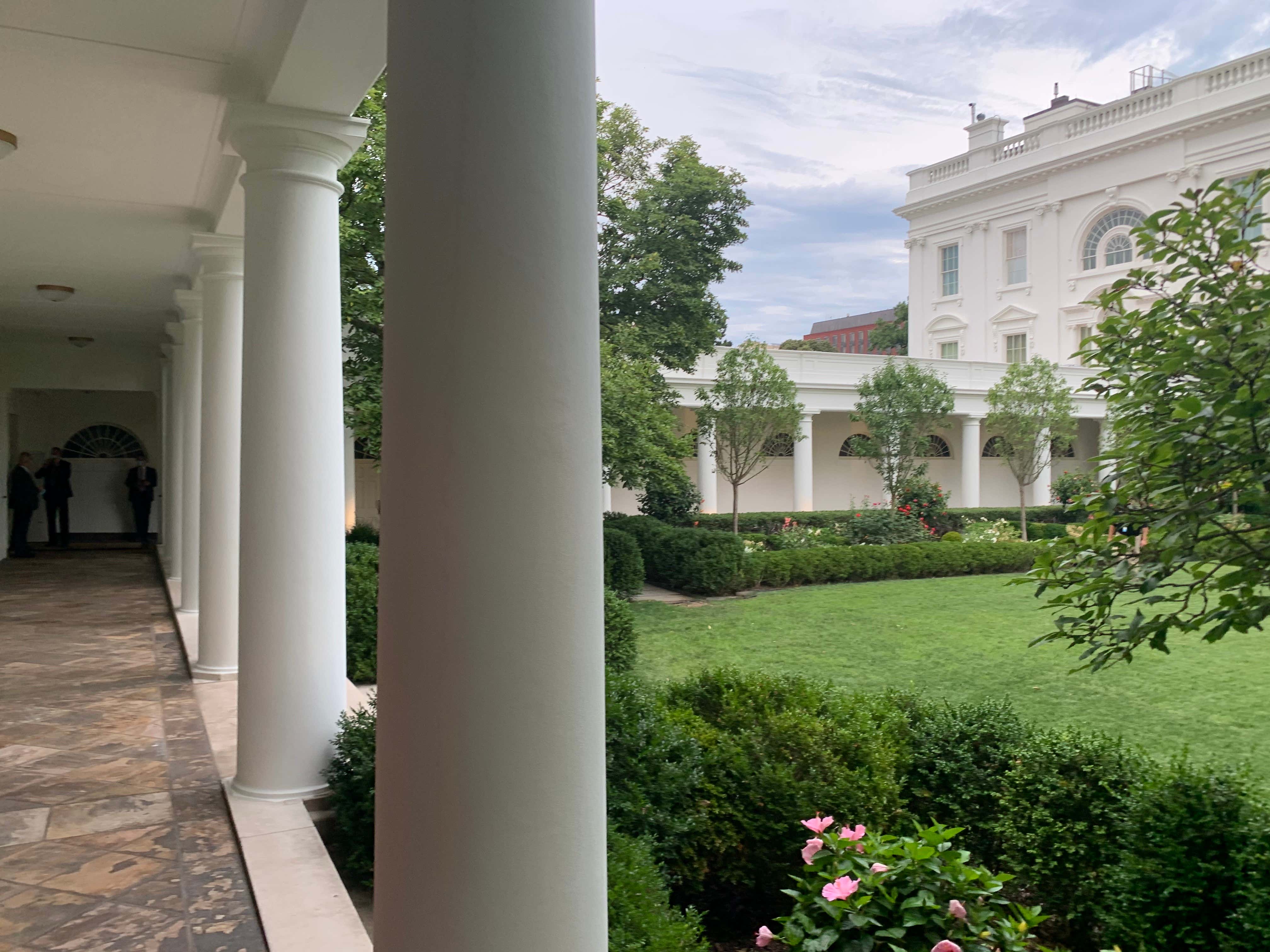 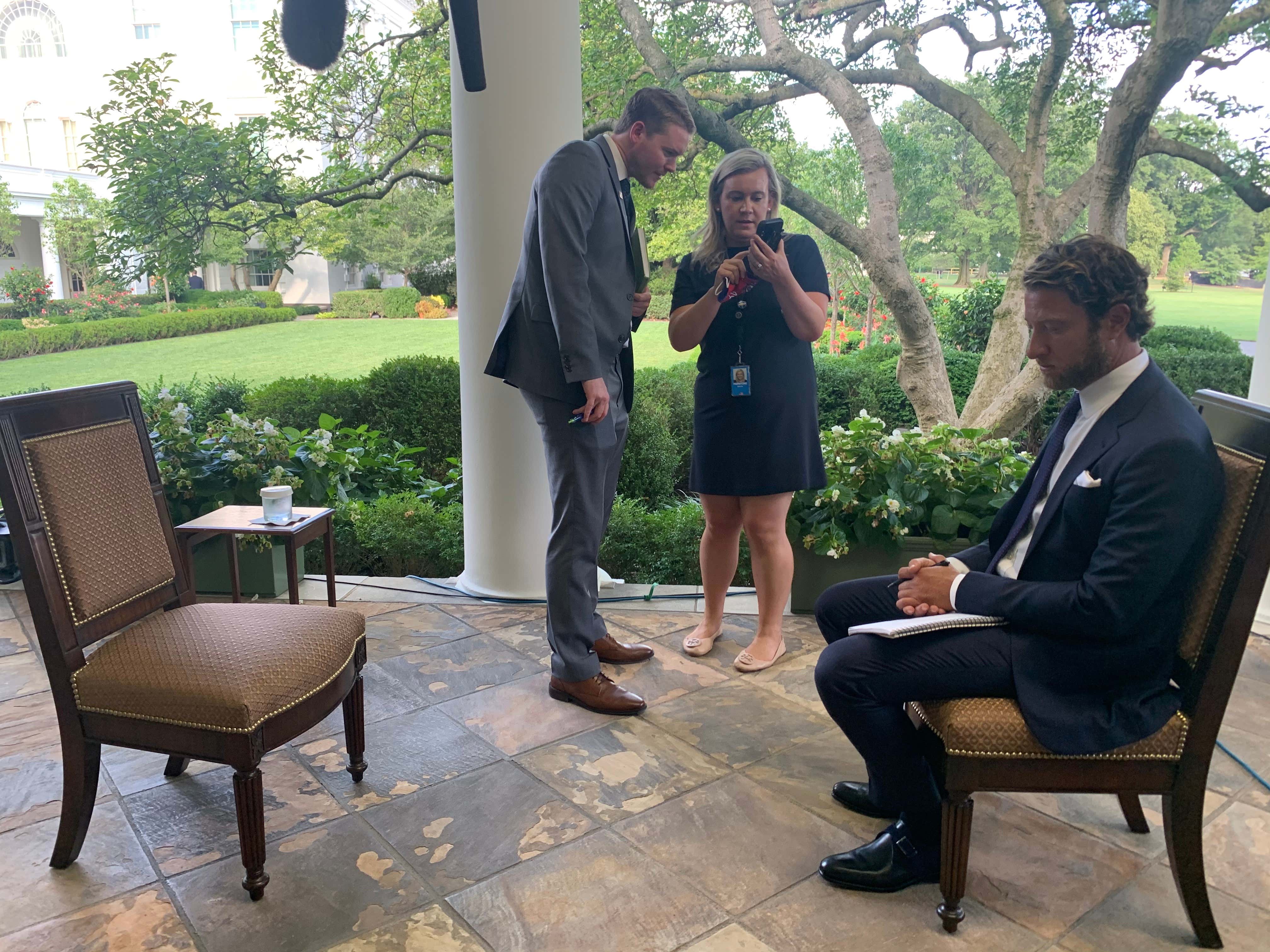 It was very hot outside, but most people weren't sweating as much as me. I was nervous, and really didn't have an answer for audio capture. We were told the president would NOT be allowed to be personally mic'd, which created an issue ...to say the least. I had always been planning on putting a mic on Dave and Trump. In fact, if it wasn't for this White House staff member who happened to have 2 large boom microphones and stands, I'm not sure what we would have done: 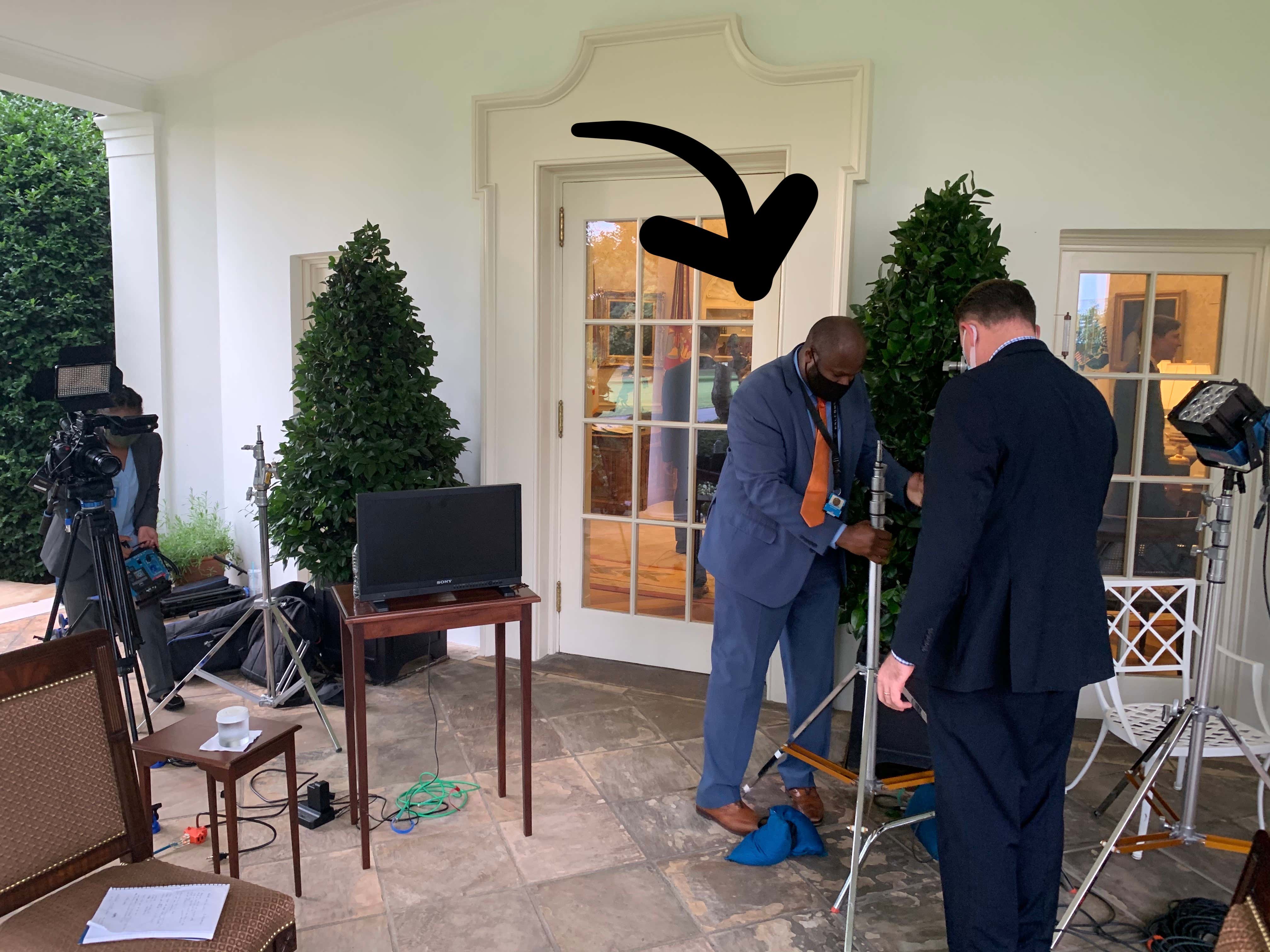 Once the cameras were set, it was a lot of tweaking. We set up a monitor for the President to see himself, which is actually pretty common. There was lots of talk from the staff about not wanting too much glare or sunlight on the presidents' face. I was more worried about the opposite: It was getting darker every minute. 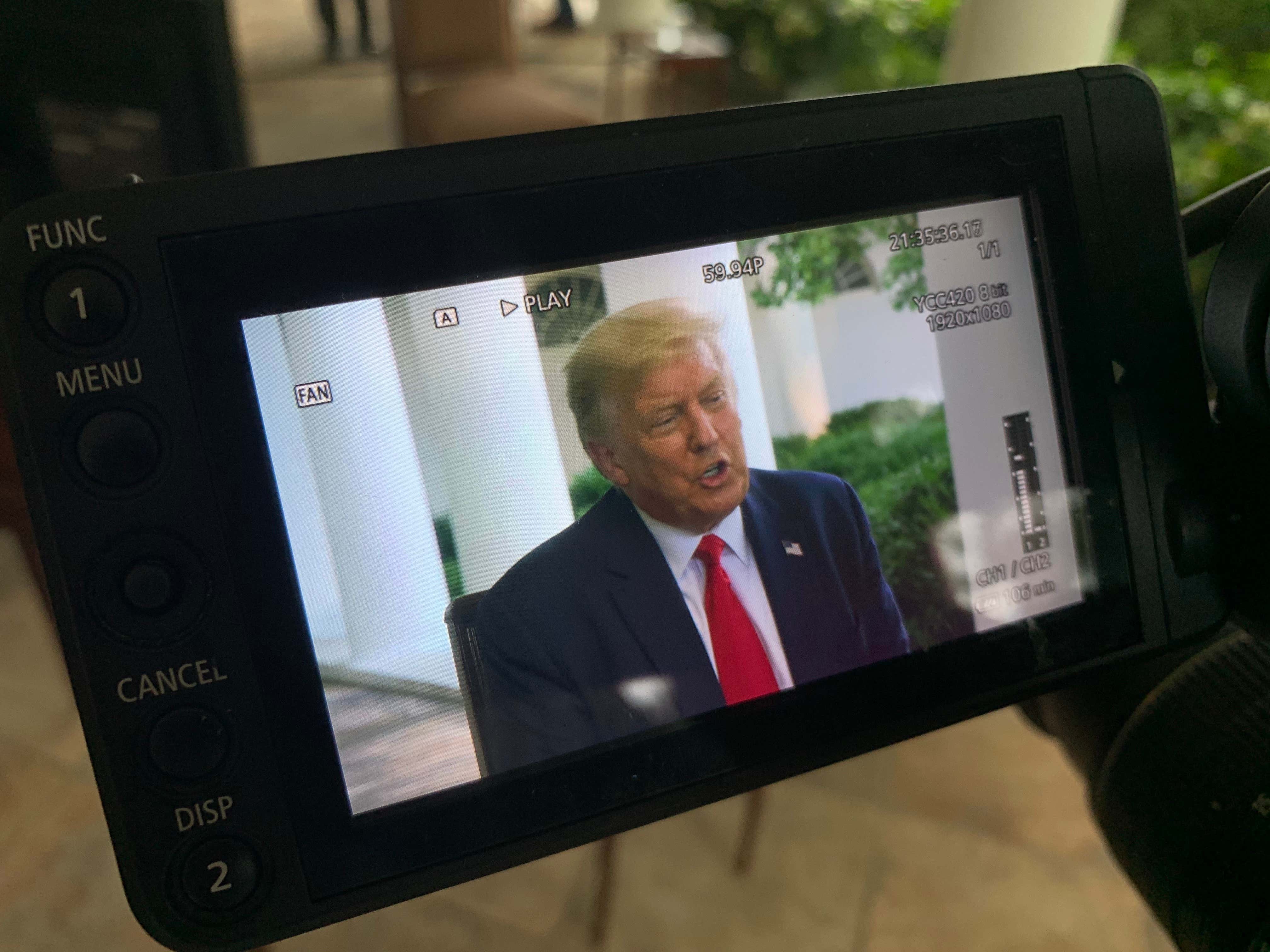 Once we got going, I was hemmed in by people and unable to move. I snapped this photo below, which I would text to Dave later, and he put on his instagram story. It was then screen grabbed and shared on twitter: 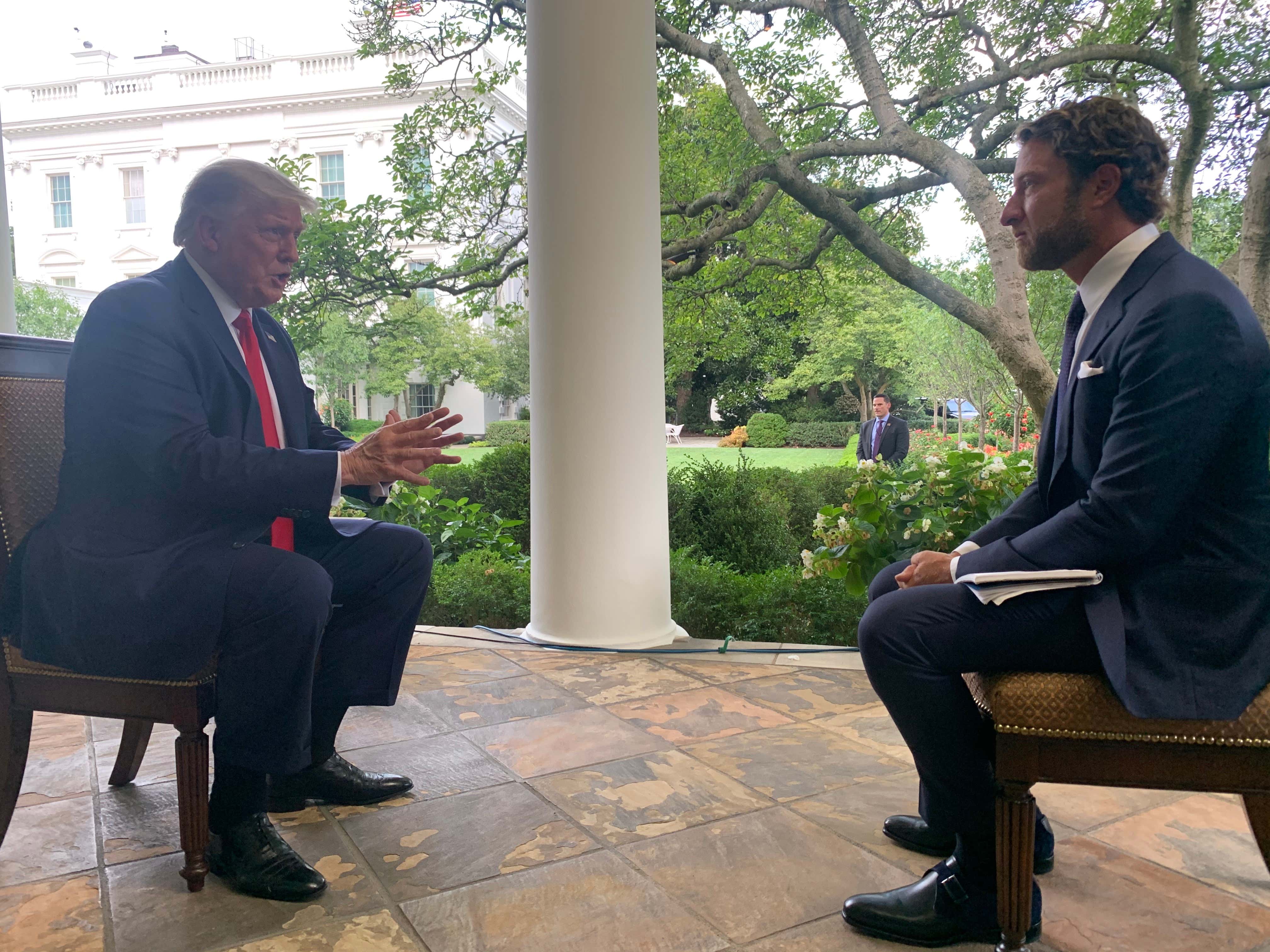 Once we wrapped, I actually got to step foot in The Oval Office and snap a picture next to President Trump. I said It was "nice to meet you," and he said likewise. I then walked out of The Oval (for the last time ever?) and began to pack on the patio. I then saw Dave's notebook he used to interview Trump, and it had the title "First Interview." My favorite question Dave penned down: "How long does it take you to come up with insults?" 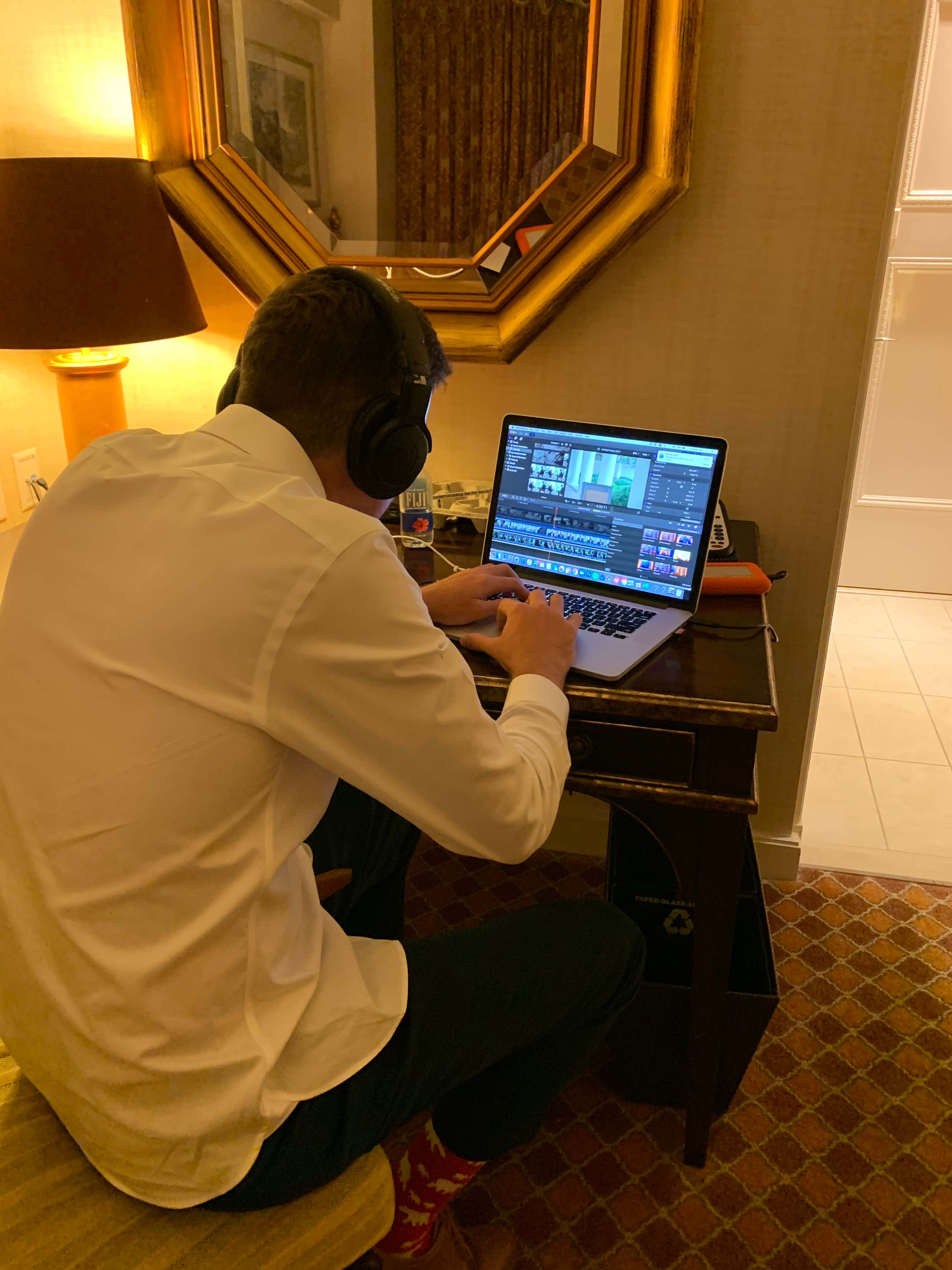 Big thanks to Frankie for the invite. He did all the hard work on the edit. Huge thanks to Dave Erika, and Kevin for everything as well.

Watch Behind The Scenes HERE.

I recapped this story for Large and Vibbs on the Twisted History podcast this week: