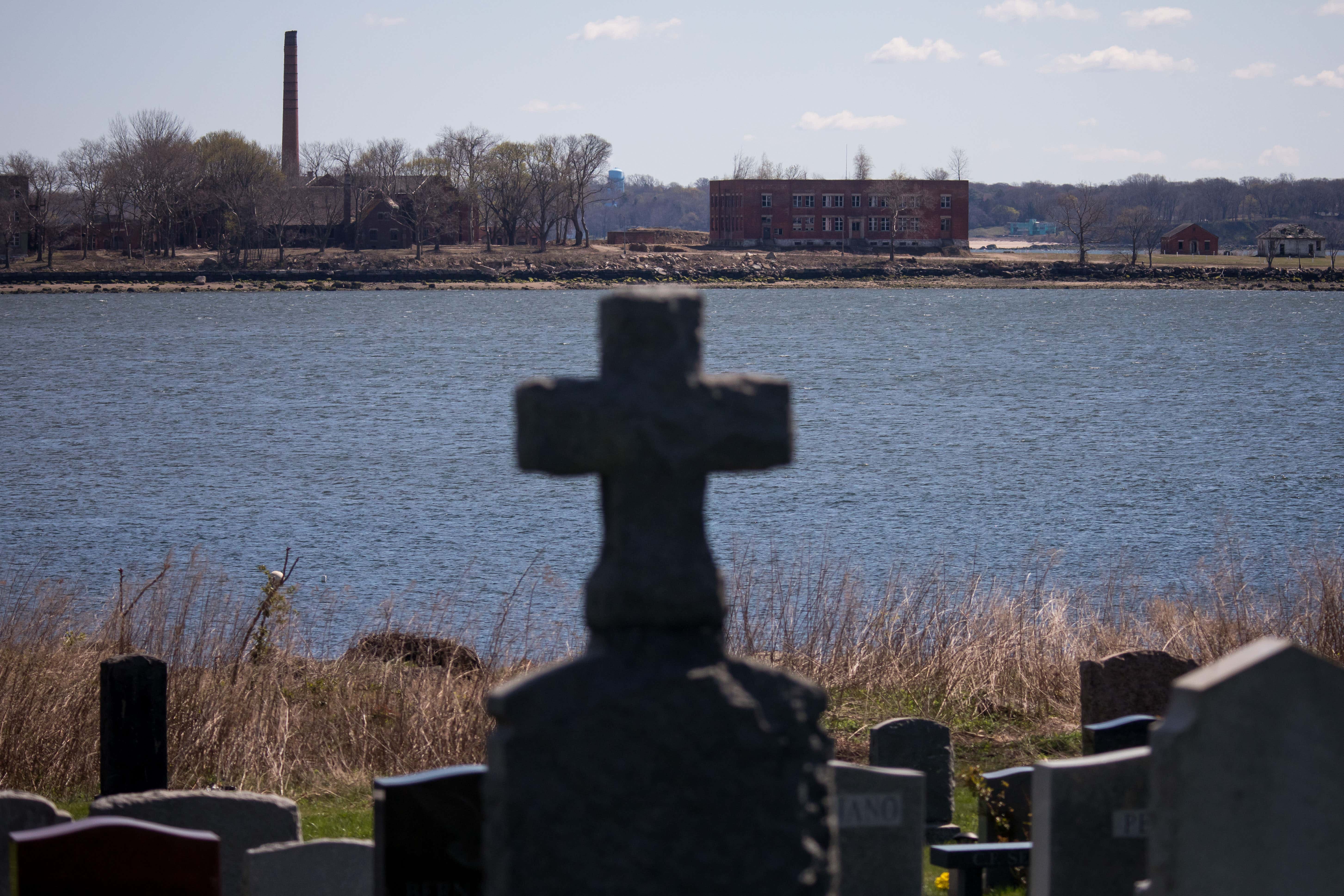 (A large burial pit and abandoned buildings are seen on Hart Island, NY)

by producer John Kelly, notes and research by Saint Anne

The Twisted History of Hart Island - "The Island of the Dead"

Hart Island is located at the western end of The Long Island Sound, in the northeast Bronx. 131 acres measuring approximately 1 mile long by 0.33 miles wide, Hart Island is part of the Pelham Islands archipelago, to the east of City Island.

It’s also one of the biggest mass graves in the world you've never heard of.

Hart Island was designated as the temporary burial site for victims of COVID-19 if deaths overwhelmed the capacity of mortuaries. The island was chosen in lieu of using city parks for such a purpose.

Preparations for mass graves began at the end of March, and on April 9, Reuters reported that private contractors were hired to replace inmate labor for mass grave burials, and burials began.

With record-breaking coronavirus-related deaths overwhelming morgues and mortuaries in New York City, the public cemetery on Hart Island is seeing an increase in burials—from 24 a week to 24 a day.

Historically, the Department of Correction had burials conducted by inmates from the Rikers Island jail.

What exactly has been going on there? There is a long answer to that question, dating back to the mid 1600s, so we’ll start at the beginning:

The first public use of Hart Island was training the 31st Infantry Regiment of the United States Colored Troops beginning in 1864. The USCT regiments were precursors to the Buffalo Soldier regiments in the American Old West.

A steamboat shuttled recruits to the island from the Battery at the southern tip of Manhattan. The barracks there could house 3,000 recruits at a time. In total, over 50,000 men were ultimately trained there.

In November 1864, construction of a prisoner-of-war camp on Hart Island with room for 5,000 prisoners started. The camp was used for four months in 1865 during the American Civil War (1861-1865) and the island housed 3,413 captured Confederate Army soldiers.

The first burials on Hart Island were 20 Union Army soldiers killed during the Civil War.

On May 27, 1868, New York City purchased the island 45-acre public graveyard called "City Cemetery" or "Potter's Field." In 1869, a 24-year-old woman named Louisa Van Slyke died from Yellow Fever in a charity hospital, and with no one to claim her remains, she became the first burial at the Potters Field on Hart Island.

A potter's field, paupers' grave or common grave, is a place for the burial of unknown, unclaimed, or poor people.

"Potter's field" is of Biblical origin with the first one stated to have been purchased, with the coins that had been paid to Judas for his identification of Jesus.

After Judas' suicide, the high priests of Jerusalem are stated to have acquired it for the burial of strangers, criminals, and the poor, since the coins paid to Judas being considered blood money. Prior to that it had been a site where potters collected high-quality, deeply red clay for the production of ceramics, thus the name potters' field.

The number of burials on Hart Island exceeded 500,000 by 1958 and that number has grown to over 1 million bodies today.

Back to 1880, The New York Times described the island as "the Green-Wood of Five Points", comparing an expansive cemetery in Brooklyn with a historically poor neighborhood in Manhattan.

Hart Island was used as a quarantine station during the yellow fever epidemic of the late 1800’s. In that period, the island contained a women's psychiatric hospital called The Pavilion, which was built 1885, as well as a tubercularium.

There was also an “industrial school” with 300 students on the island. As far as I can tell, an industrial school back then was another name for a kids’ prison. In the late 19th century, Hart Island became the location of a boys' workhouse, which was an extension of the prison on Blackwell Island.

By the early 20th century, Hart Island housed about 2,000 delinquent boys as well as elderly male prisoners from Blackwell's penitentiary.

In 1924, a 4-acre tract of land on Hart Island's west side was sold to Solomon Riley, a millionaire real estate speculator from Barbados. Riley subsequently proposed to build an amusement park on Hart Island, which would have served the primarily black community of Harlem in Manhattan. It was referred to as the "Negro Coney Island" because at the time, African Americans were banned from the Rye Playland and Dobbs Ferry amusement parks in the New York City area.

Riley had started building a dance hall, boardinghouses, and a boardwalk, and purchased sixty steamboats for the operation. BUT the state government raised concerns about the proposed park's proximity to a jail and hospital, and the city condemned the land in 1925.

The prison population of Hart Island was moved to Rikers Island during World War II, and Hart Island's former workhouses were used as a disciplinary barracks by the United States Armed Forces.

The New York City Department of Correction reopened Hart Island as a prison following the war, and in 1950, The New York City Board of Estimate approved the construction of a homeless shelter that was intended to serve 2,000 people.

The homeless shelter operated from 1951 to 1954; it was also used to house alcoholics.

In 1956, the island was retrofitted with Nike Ajax missile silos. Battery NY-15 (as the silos were known) were part of the United States Army base Fort Slocum from 1956 to 1961. They were operated by the army's 66th Antiaircraft Artillery Missile Battalion.

The silos were underground and were powered by large generators. The last components of the missile system were closed in 1974.

Proposals to re-inhabit the island have since failed. In 1972, the city considered converting it into a residential resort but the plan abandoned.

New York City mayor Ed Koch created a workhouse on the island for persons charged with misdemeanors in 1982 but not enough prisoners were sent there. Six years later, another proposal called for a homeless shelter and a workhouse to be built on Hart Island, but this plan was abandoned because of opposition from residents of City Island.

In 1985, sixteen bodies infected with AIDS were buried at the southern tip of Hart Island, away from the rest of the corpses, because it was believed that the dead AIDS victims would contaminate the other corpses with the disease.

The first pediatric AIDS victim to die in New York City is buried in the only single grave on Hart Island with a concrete marker that reads SC (special child) B1 (Baby 1) 1985.

Since then, thousands of AIDS victims have been buried on Hart Island, but the precise number is unknown.

The island was significantly affected by Hurricane Sandy in 2012, and some of the shoreline was eroded, which exposed many of the skeletons buried on the island.

Currently is still the largest tax-funded cemetery in the world, and one of the largest cemeteries in the United States. The remains of more than one million people are buried on Hart Island, though since the first decade of the 21st century, there are around 1,500 burials there every year.

There are seven sizes of coffins, which range from 1 to 7 feet long. Each box is labeled with an identification number, the person's age, ethnicity, and the place where the body was found, if applicable.

The bodies of adults are frequently disinterred when families are able to locate their relatives through DNA, photographs and fingerprints kept on file at the Office of the Medical Examiner. There are an average of 72 disinterments per year. Adults' coffins are staggered to expedite removal. Children, mostly infants, are rarely disinterred.

The potter's field is also used to dispose of amputated body parts, which are placed in boxes labeled "limbs".

In the past, burial trenches were re-used after 25–50 years, allowing for sufficient decomposition of the remains. Since then, however, historic buildings have been demolished to make room for new burials.