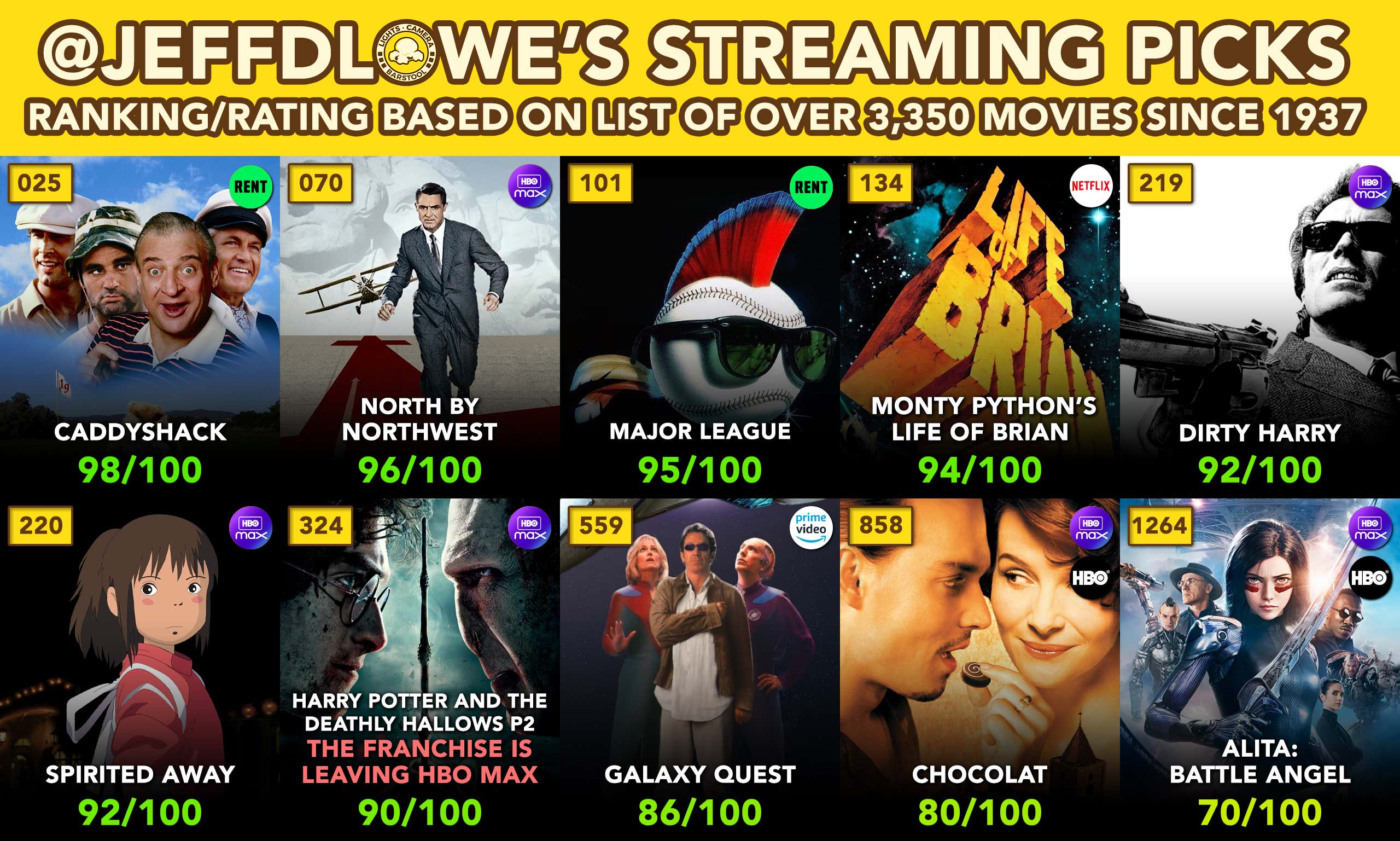 I'll circle back on the big change from last week:

My list now expands past 3,350 movies and to the year 1937: I have been working on (still am) a project to get all of my movie ratings onto a website. Since I have been watching movies my entire life, I decided to go back and backlog movies from years, and years before 2006, when I started logging my ratings. So now my list is expanded, and I can dip into those ratings and rankings for streaming suggestions. The website will be coming soon…

Hopefully within the next week, or two.

One thing you'll notice this week, I have a lot of HBO Max movies on here. This wasn't by design, but it just shows how strong of a movie library they launched their service with.

25) Caddyshack (98/100) - Rent: I don't love starting off the list with a movie you have to rent, but to celebrate the 40th Anniversary of 'Caddyshack' (July 25th, 1980), I had to toss it on the list. When it comes to my movie rankings, 'Caddyshack' is at the top of every list. It's #25 overall, #1 in the Sports category, and #1 in the Comedy category. It's a classic, legendary, and downright hilarious movie that gets rewatches from me all of the time. Find a better comedy character than Al Czervik…

70) North by Northwest (96/100) - HBO Max: The library of old movies on HBO Max (in the TCM category) is outstanding, so I figured let's pull some more movies from that second this week. Easily my favorite Hitchcock movie (I'd have to side with 'Psycho' as his best), 'North by Northwest' is a gripping action and suspense thriller that holds up over 60 years later. The movie is also, maybe more than anything, just fun, and when you mix the craft of a genius over the history of movies with a good time, you absolutely can't go wrong.
--

101) Major League (95/100) - Rent: With baseball back, I had to go with my favorite baseball movie of all time. Do I lean to 'Major League' a little more as a Cleveland Indians fan? Definitely, but I will also stand by the fact it is a Top 2 baseball movie of all-time, regardless of your fandom. It's endlessly hilarious, but not at the expense of also just being a sports movie with well put together baseball scenes. It's also worth noting that I don't really recognize the sequels, they feel like completely different movies, in a whole different universe. I've seen them both once each and will never watch them again. Am I being snobby with this comment? Probably, but it had to be said!
--

134) Monty Python's Life of Brian (94/100) - Netflix: The Monty Python rankings debate is an interesting one for another time, but it's worth noting that a bunch of the movies are currently on Netflix. While 'The Holy Grail' gets all of the shine, 'Life of Brian' is not that far behind for me. Just for the song "Always Look on the Bright Side of Life" alone, I love this movie. The satire is so fucking smart and hilarious, and it's underappreciated when it comes to discussions about the best satirical comedy movies. British humor just hits in a completely different way sometimes.

219) Dirty Harry (92/100) - HBO Max: While it may not be quite as stunningly good as the Dollars Trilogy from Clint Eastwood, the Dirty Harry franchise is all on HBO Max, including the best of the bunch, 'Dirty Harry'. Where the rest of the franchise falls a bit short, 'Dirty Harry' packs a punch with both its story and action and never really lets up. It's an incredibly enjoyable rush that feels rather exhilarating right from the jump. The movie is sharp, both in its style and edge, and is a classic from its release era that more than holds up all these years later.
--

220) Spirited Away (92/100) - HBO Max: While I may not be as big of an anime fan as my co-workers on Lights Camera Barstool, it's impossible for me to not recognize how fantastic of a movie you get with 'Spirited Away'. Hayao Miyazaki is an icon in the film industry, no questions asked, and 'Spirited Away' is right up there with his best work. It's a must-watch for any fan of the genre, though I'd suspect most fans have seen it at this point. As a whole, the anime sections on HBO Max with Studio Ghibli and Crunchyroll offer a great opportunity to deep-dive on some classic gems.
--

324) Harry Potter and the Deathly Hallows Part II (90/100) - HBO max: It's Harry Potter. For some odd reason, a reason I am sure someone is mad at me for not knowing, HBO Max and Warner Bros. are already pulling the Harry Potter movies off of HBO Max. So, if you want a streaming re-watch of the franchise, you have just about a week to do so! The best of the bunch if still the final chapter of the final book-to-movie adaptation, 'The Deathly Hallows'. It's not just a great Harry Potter movie, it's a great overall movie in my eyes. They truly ended the franchise with a bang.
--

559) Galaxy Quest (86/100) - Amazon Prime Video: One of the best Star Trek movies ever made, that isn't at all a Star Trek movie, but is also a parody of Star Trek, but is also a satirical comedy on fandom and superfan culture of movies and properties, but also a really good action space movie. Basically, what I am getting at here is that 'Galaxy Quest' is both hilarious and a damn good space movie. It's such a fascinating mix of storylines and genres and meshes together perfectly. Also, it is another Alan Rickman movie on this list, and you can't go wrong with that!
--

I have done these suggestions posts for 17 weeks now, and a group of 'Alita: Battle Angel' fans always replies in my mentions talking about this movie.

Truth be told, I don't hate it! The movie isn't great and has plenty of problems, but it was unfairly cast aside and overlooked. For the intended purposes of the movie, it is a fairly decent and enjoyable time, with a great cast in tow.

Give it a chance!