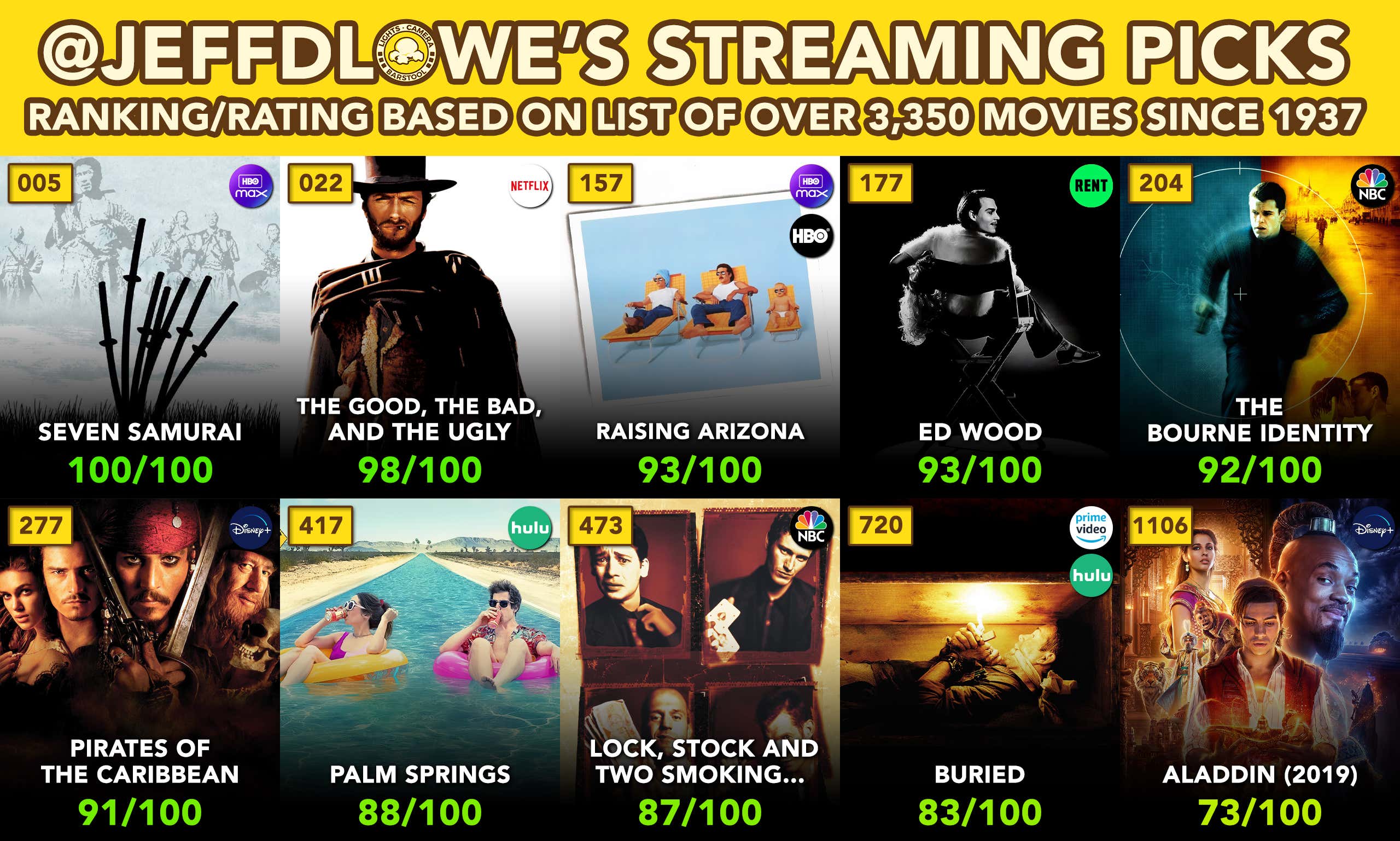 1) My list now expands past 3,350 movies and to the year 1937: How did this happen? Well, I have been working on (still am) a project to get all of my movie ratings onto a website. Since I have been watching movies my entire life, I decided to go back and backlog movies from years, and years before 2006, when I started logging my ratings. So now my list is expanded, and I can dip into those ratings and rankings for streaming suggestions. The website will be coming soon...

2) NBC launched its streaming platform: It's called Peacock. It's free with ads, but you can also buy the premium service. So, I will be using movies from that platform as suggestions.

05) Seven Samurai (100/100) - HBO Max: It's just perfect, plain, and simple. A top-five greatest movie of all-time in my opinion, 'Seven Samurai' is something every movie fan needs to experience once in their life. Imagine making a movie that still holds up nearly seventy years later? With my expanded movie rankings now dating back to the 1930s, I had to add an oldie but goodie great pick and, with HBO Max's fantastic old movie library, this made too much sense.
--

22) The Good, The Bad and the Ugly (98/100) - Netflix: Let's keep the train rolling on the older movies with the greatest Western ever made, 'The Good, The Bad and the Ugly'. Anytime something this great is on Netflix, you have to give it a watch because it could leave the platform at any moment. Will there ever be a better spaghetti western ever made? I doubt it. To top just the music in this movie alone seems like an impossible task. When I think of a movie "epic," this will always be one of the first movies that enter my mind.
--

157) Raising Arizona (93/100) - HBO Max: Back to HBO Max we go for what is probably my favorite, and definitely my top, Nic Cage movie. This feels like their most fun movie, delivering some of their best comedic writing along the way. We tend to forget nowadays what Cage can do when given the proper vessel, and 'Raising Arizona' is a great example of such. It's a wacky movie at times, but, usually, that is when the Coen Brothers are at their best.
--

177) Ed Wood (93/100) - Rent: Without even blinking an eye, I declare 'Ed Wood' as the best movie made by Tim Burton. Before there was 'The Disaster Artist', we got this black & white gem. The movie is packed with so much charm, and if you liked the recent movie made about Tommy Wiseau and 'The Room', you should have no trouble falling for 'Ed Wood'. Absurd on many levels, the movie will give you plenty of laughs but in a rather positive, uplifting way.
--

204) The Bourne Identity (92/100) - Peacock: Despite the letdowns that were the previous two sequels, the original Bourne trilogy is still one of the best collections of action movies around. One of the big perks of Peacock from NBC is having them all in one spot to finally stream. My verdict? They hold up. The Bourne movies, especially the first, have a fairly distinct style of action that hasn't aged well when adapted for new movies, but still fits perfect for Matt Damon and the franchise. Oh, and this right here at the end?

277) Pirates of the Caribbean: The Curse of the Black Pearl (91/100) - Disney+: Here's a movie that has been pushed down the ladder because of some really awful sequels over the years. Even with some bad follow-ups, there's no denying how fantastic the original movie in the franchise was, and remains all these years later. While Disney may not have sustained success adapting theme park rides into movies, this one worked. The summertime always feels like the best time to rewatch this movie.
--

417) Palm Springs (88/100) - Hulu: You can check out our full review of this new movie right here, but if you want a recent release, head on over to Hulu. The comedy, pulling from the same ideas as 'Groundhog Day', destroyed our expectations and was a really good movie and enjoyable watch.
--

473) Lock, Stock and Two Smoking Barrels (87/100) - Peacock: One of two Guy Ritchie movies on this list today, 'Lock, Stock' is the filmmaker creating a product right in his wheelhouse. He went back to his roots in 2020 with 'The Gentleman', a movie I highly suggest. But this throwback, jam-packed with some crazy violence and hilarious writing, is one of Ritchie's best, and a great addition to the launch of Peacock.
--

720) Buried (83/100) - Amazon Prime Video/Hulu: This is a fairly morbid movie, but it's a really great performance from Ryan Reynolds and a big departure from the other suggestions on this list today. You're essentially getting Reynolds acting as if he is trapped in a buried coffin for an hour and a half. The actor famously talked about how fucking terrible the final days of filming were, and you'll be able to tell from watching the movie. It's claustrophobic and will make you squirm at times, but I think it is one of Reynolds' more underappreciated performances.
--

1106) Aladdin (73/100) - Disney+: I bet you didn't expect to see this on here! Guy Ritchie's live-action remake of 'Aladdin' for Disney was far from great, but it was certainly not a bad movie. The casting of Jafar was the weakest decision with the movie, and I felt it derailed everything quite a bit. But damn, Naomi Scott was great as Jasmine and, in a major surprise, Will Smith did a fantastic job with the impossible-shoes-to-fill role of the Genie. Did it live up to Robin Williams? No, but after all of the pre-release backlash, Smith found a way to make the character his own, and quite enjoyable. The movie has some character and life and is worth a watch, especially with the family. People want more to watch on Disney+, well, here's an option.