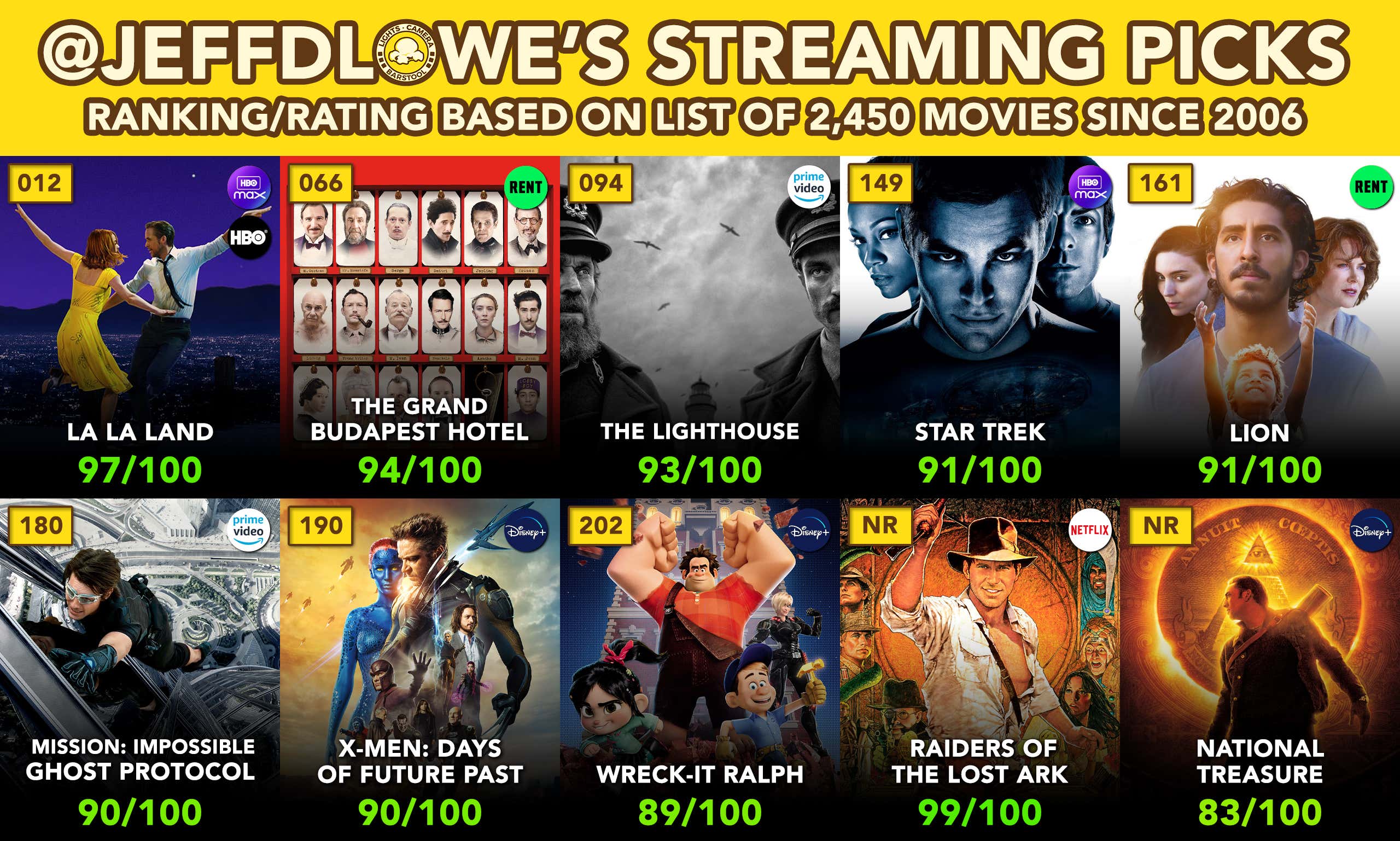 66) The Grand Budapest Hotel (94/100) - Rent: Easily one of Wes Anderson's best movies, 'The Grand Budapest Hotel' has one of the most impressive casts you'll ever see: Ralph Fiennes, Tony Revolori, F. Murray Abraham, Edward Norton, Saoirse Ronan, Tilda Swinton, Bill Murray, Jeff Goldblum, Jason Schwartzman, Willem Dafoe, Adrien Brody, Harvey Keitel, Jude Law, Owen Wilson, Lea Seydoux, Bob Balaban, an more. It's absurd, how does he do it!? I'd argue this is one of the less "Wes Anderson-y" of Anderson's library, so those who don't love his style should still enjoy this movie. That's not to stay it isn't absolutely packed with the artistic flair that makes his movies what they are in terms of great quality!
--

94) The Lighthouse (93/100) - Amazon Prime Video: This was my short thoughts on 'The Lighthouse' after the movie was released last year, "‘The Lighthouse’, one of the most uniquely insane movies of the decade, lives up to the hype with the help of killer performances from Willem Dafoe and Robert Pattinson. Robert Eggers’ latest release is a rare mix of art, mythology, and a grounded setting and characters. While ‘The Lighthouse’ might leave you puzzled, it does so in such a thought-provoking and intriguing way." All of that remains true for me. The movie is a total trip, it's out there, packed some psychological craziness and… farts. This won't be for everyone, and I have heard people say they either love it or just absolutely loathed everything about it. 'The Lighthouse' is one of those movies, it's bold, and goes for it, but if you connect with what they're going for, you should have a great time.
--

149) Star Trek (91/100) - HBO Max: I'm a Star Wars guy, not a Star Trek guy, so feel free to throw insults at me if this is some sort of crime to love the J.J. Abrams reboot of the franchise (I realize this statement works in reverse, by the way). This movie is a perfect example of how to soft-reboot a franchise. You have nice nods to the original franchise and movies, all while establishing a new, intriguing storyline. It's a shame the follow-up movie was a serious downgrade in quality, but the action and drama in the movie will always get me. Worth a first-time watch, especially for non-Star Trek fans, and subsequent rewatches thereafter!
--

161) Lion (91/100) - Rent: I always get a kick out of movies like 'Lion', this shit was nominated for Best Picture in 2017 and hardly anyone remembers it! This movie is so well made, from the look of the movie, the acting, down to the music, so while the storyline may be a touch cliche for the genre, you can easily look past it. Even with that said, the cliched moments and setups won't bother you too much, as the story is incredibly engaging, especially in terms of emotional impact. 'Lion' is also further proof at the acting skills from Dev Patel, he can really hammer home a successful movie in the lead role, and I will forever be made they attached him to that awful 'Last Airbender' project.
--

180) Mission: Impossible - Ghost Protocol (90/100) - Amazon Prime Video: The first movie in the rebirth of the 'Mission: Impossible' franchise, Brad Bird set the table with a killer action movie. They've only gotten better since this movie, with Christopher McQuarrie coming on board for 'Rogue Nation' and 'Fallout', proving his skills as the best action movie director in the game right now. The movie is a thrilling romp from start to finish, especially once the story shifts to Dubai and the Burj Khalifa. I've always gotten the sense that some people don't care for the franchise solely based off of the first three movies. Well, if you're one of those people, let me tell you this: give the new ones a chance!
--

190) X-Men: Days of Future Past (90/100) - Disney+: A few weeks back I put 'X-Men: First Class' on this list, and now, with the sequel on Disney+, I must do the same! This movie is fucking excellent and the positive side of a messy franchise that has more misses than hits. Rushing to this storyline, instead of waiting as Matthew Vaughn had wanted, might have been a mistake, but at least the movie turned out to be a success. 'Days of Future Past' successfully ties in the new storylines with the old characters everyone loved from the original movies. There's great action, drama, and a superb acting job from Michael Fassbender as Magneto. I am excited for Marvel Studios to reboot the X-Men and tie them into the Marvel Cinematic Universe, but this movie will always be a bright spot.
--

202) Wreck-It Ralph (89/100) - Disney+: Just a flat out fun movie and more proof that original ideas are always killer for both Pixar and, in this case, Disney Animation. It has great humor, something for kids, something for parents, and a mix of everything in between! When Disney's animation departments "get it," they rarely turn in a bad performance. The movie pops with a great message and a fresh world-building storyline. Unfortunately, the sequel wasn't able to recapture that magic, which, once again, reinforces the idea that the more original Disney gets with their animated movies, the better result usually ends up being.
--