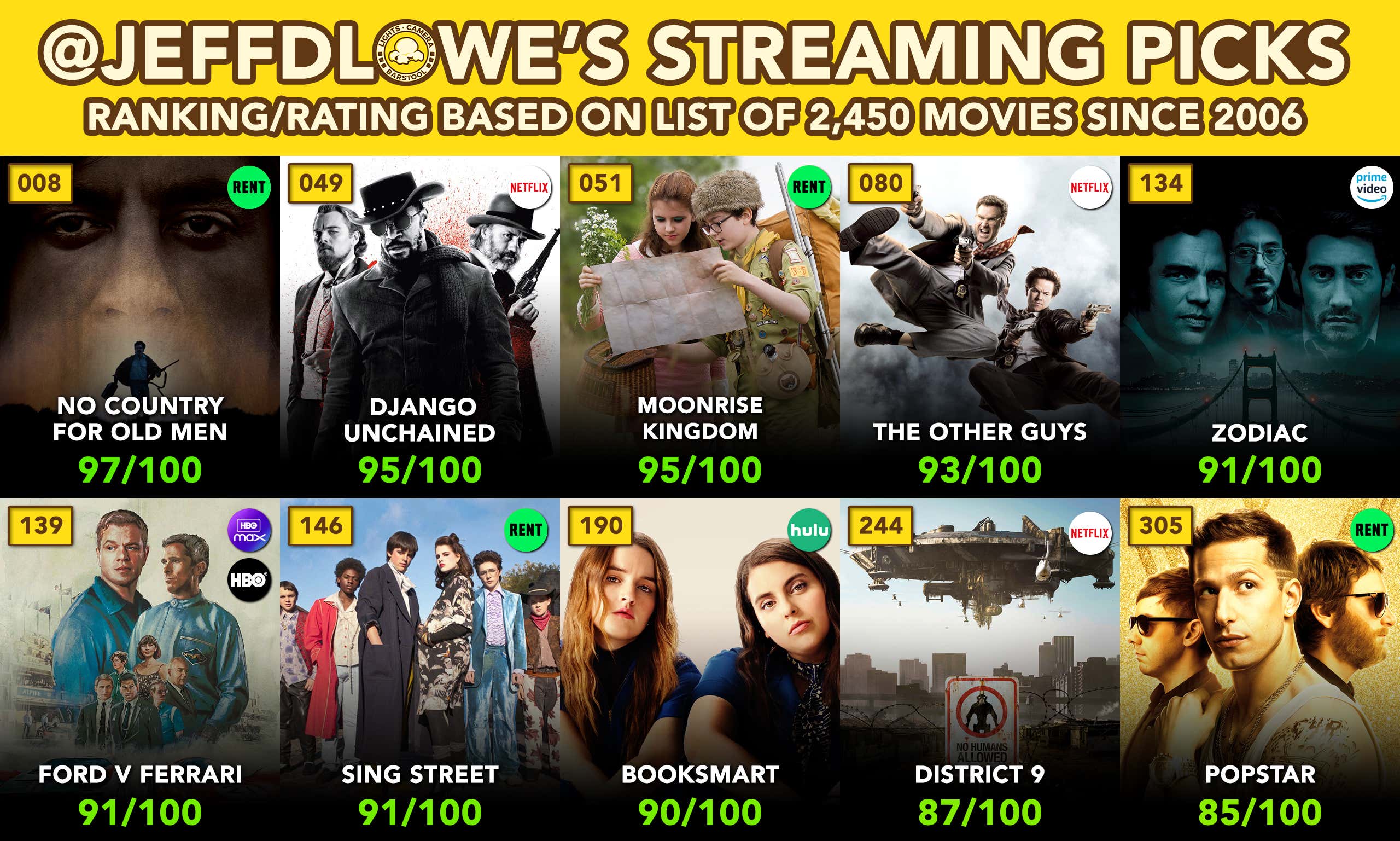 I am slowly running out of movies on streaming platforms for these lists. With now 130 movie suggestions over the course of the last 13 weeks, many of my top picks just aren't on any platforms. It' a shame, but if you really want to watch something great, renting it for $4 to $5 on YouTube isn't all that bad! As always, you can also check out my My Top 50 Movies Since 2006 List, which can be found here.

08) No Country For Old Men (97/100) - Rent: Featuring the most terrifying villain in my Top 10, 'No Country For Old Men' is not available to stream anywhere, but if you've never seen it, it's a must rent. As thrilling and suspenseful as any movie you'll find from the last 20-plus years, the Coen Brothers were more than deserving of the Best Picture win for this movie. This movie is a fucking tour de force in every possible way, it will always be a movie that hovers around my Top 10 or Top 15.
--

49) Django Unchained (49/100) - Netflix: Speaking of a tour de force, the acting in 'Django Unchained' will always blow me away. Christoph Waltz was the only Oscar winner of the trio and you could argue he wasn't even the best! This is probably Leonardo DiCaprio's best performance, his energy as the movie's villain was incredible and Jamie Foxx was the perfect lead role in the movie. It's your classic mix of absurd action and fantastic dialogue from Quentin Tarantino. Whenever one of his movies is on a streaming platform, you absolutely have to fire it up.
--

51) Moonrise Kingdom (51/100) - Rent: Oh, Wes Anderson. You either like his distinct style and personal genre, or it's absolutely not for you. I'm not sure there is a director where I totally get disliking him or her more than with Anderson. He isn't always perfect, but his movies are fantastic in my eyes. 'Moonrise Kingdom' is right up there with his top work, which includes movies such as 'Fantastic Mr. Fox' and 'The Grand Budapest Hotel'. When it comes to Anderson movies, this ensemble cast is as good as it gets, with Edward Norton, Bill Murray, Bruce Willis, Frances McDormand, Jason Schwartzman, Tilda Swinton, and more. Unfortunately, most of these movies, including 'Kingdom', aren't on streaming, so you'll have to rent it.
--

134) Zodiac (91/100) - Amazon Prime Video: One-third of the original Avengers, Robert Downey Jr., and Mark Ruffalo team up with Jake Gyllenhaal for one hell of a mystery-thriller with 'Zodiac'. Based on the famous (and Wikipedia rabbit hole inducing) story of the Zodiac Killer, this is just your classic David Fincher movie. From 'Seven', to 'Fight Club', 'Benjamin Button', 'The Social Network', and 'Gone Girl', Fincher has an insane career batting average as director. Even the score is as solid as ever, despite the absence of his usual collaborators in Trent Reznor & Atticus Ross.
--

139) Ford v. Ferrari (91/100) - HBO Max/HBO Go: 'Ford v Ferrari' is one of the best racing movies ever released and it is very clear as to why. It's very hard to not appreciate the painstaking attention to detail that went into the making of this movie. This movie feels so fucking real, you sit there in your movie seat, but it's almost as though you're in the passenger seat during these races. Having a studio commit to a large budget that allows for a movie packed with practical effects and stunning cinematography, as well as a monster cast, is a breath of fresh air. It's so great to see this fantastic 2019 release already on a streaming platform.
--

146) Sing Street (91/100) - Rent: 'Sing Street' is a feel-good, happy, enjoyable, and fantastically made coming-of-age movie. It's fairly unique and different from everything in the genre and has been a hidden gem for years. Besides my co-worker John Feitelberg, I feel as though no one ever talks about this movie? 'Sing Street' never seems to be on streaming platforms, and you have to rent it to watch the movie right now, but everyone should give this movie a try, even if you hate musical. It's such a joy to stumble upon and watch a movie that will leave you in a great mood and doesn't sacrifice any quality.
--

190) Booksmart (90/100) - Hulu: Olivia Wilde absolutely went for it with this movie in her directorial debut and my goodness, somehow she nailed it. There isn't anything new about the coming-of-age concept, but 'Booksmart' is so fucking out there and different than anything we've seen that I couldn't get enough. It caught a ton of comparisons to 'Superbad', which I get to an extent, but this movie really had a distinctly unique vibe to it. Every scene feels so different, yet works together narratively in a very cohesive way.
--

244) District 9 (87/100) - Netflix: Keeping the "unique" trend going, how about 'District 9'? It's easy to forget that this movie received a Best Picture nomination at the Oscars. t's a sci-fi movie that delivers on all of the goods people want for a drama, but it also packs a punch with its story. The Neill Blomkamp and Peter Jackson team-up for this movie was killer and, even with its award season love, it was overshadowed in a year with movies such as 'Avatar', 'Up', 'The Hangover', 'Watchmen', and other hyped-up big-budget releases. There is never a bad time to throw on 'District 9' and remind yourself how awesome this movie was and continues to be.
--

305) Popstar (85/100) - Rent: Lastly, we look at another underappreciated comedy in 'Popstar: Never Stop Never Stopping'. This is a movie, much like 'The Other Guys', that was probably released around the wrong time. Funny is funny, no matter when it is released, but some comedies are hurt with the timing and years in which they release. The evidence of this is heavy with 'Popstar' because you can feel the tide turning over the last few years on this movie. It isn't flawless, but this movie has so many fucking hilarious moments and great satirical running gags and bit (the TMZ thing always kills me). Obviously I also can't forget to mention how awesome the music is from Lonely Island in the movie. You can't stream it anywhere, but it is more than worth the rental.
--
Stay safe everyone, see ya next week.