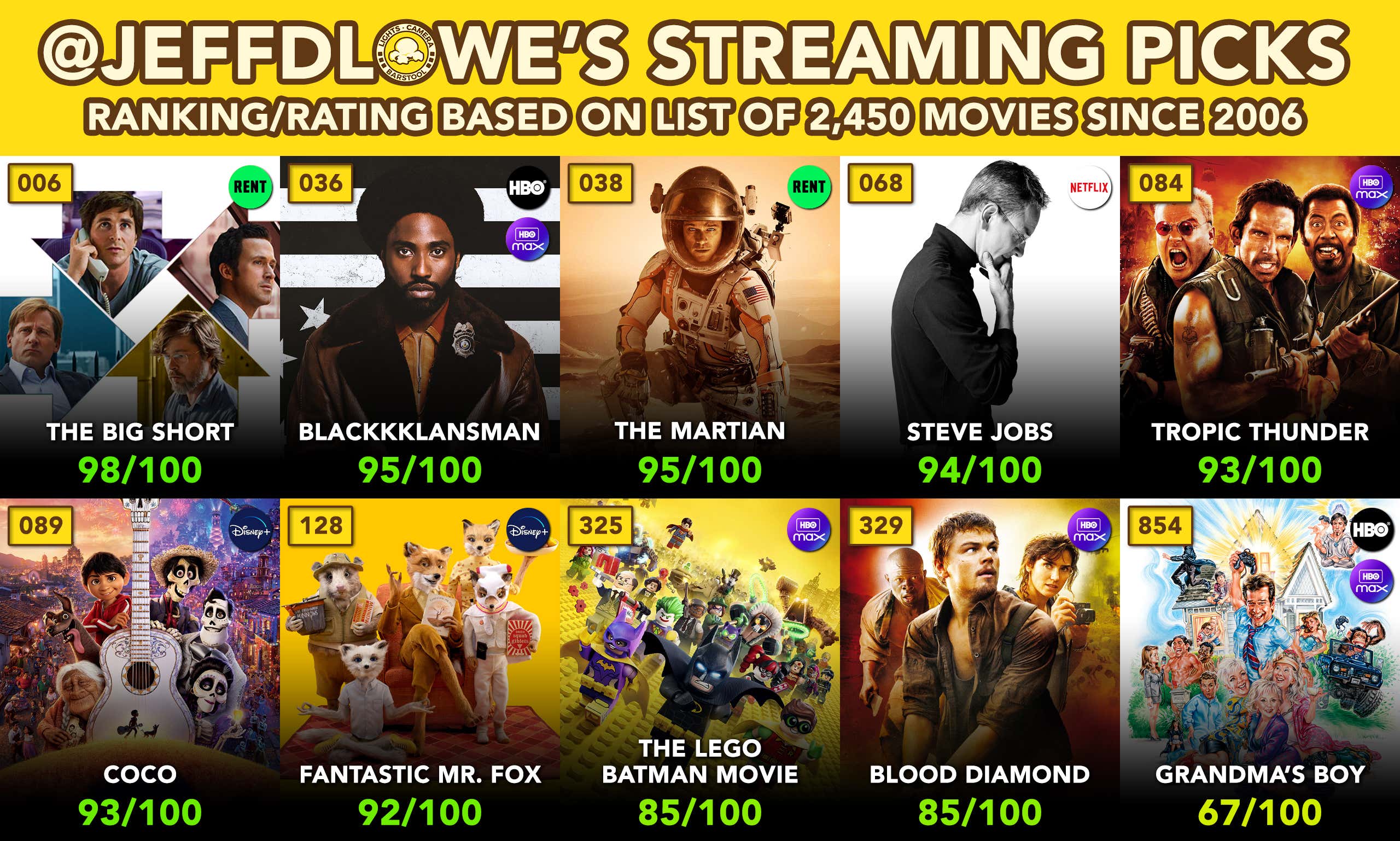 We return this week with a brand new streaming service: HBO Max. Luckily, Warner Bros.' new service, which uses HBO as its name, has allowed me to add a ton of new movies to the streaming list. Let's just get right into it! As always, you can also check out my My Top 50 Movies Since 2006 List, which can be found here.

06) The Big Short (98/100) - Rent: This is what I had to say about the movie in my Top 50 Movies blog: "Who would have thought that one of the decade's most rewatchable movies for me would be about the late 2000s financial crisis. Adam McKay (who has done everything from 'Anchorman' to 'The Other Guys', 'Step Brothers', and more) spun near-perfection with this one and the perfect castings are a big reason why. It also features what may be my favorite scene from any movie from the last decade...

I'll never stop saying good things about 'The Big Short'. Steve Carell's new show on Netflix, 'Space Force' (review to come), inspired me to toss this movie in at the top this week.
--

36) BlacKkKlansman (95/100) - HBO Max/HBO Go: My comments on this movie from a few months back: "Spike Lee's best movie, in my opinion, the intense story is enough to pull you in but the electric duo of John David Washington and Adam Driver carries this movie to greatness. The subject matter is incredibly heavy but sometimes it's great to embark on a journey that will teach you some things and say something profound."

The subject matter also, for obvious reasons, has a bit of relevance to current events right now. Lee's ability to make a story that hits hard and packs a punch with its commentary, but also establish some humor and great "buddy cop" chemistry is nothing short remarkable.
--

38) The Martian - 95/100 - Rent: Another one of my Top 50 Movies since 2006 that also, for totally different reasons, has some relevance to what is going in the world right now (here's to hoping that launch happens today). I fucking love 'The Martian' and recently watched it this past week. Talk about a great script, amazing cast, apparently scientifically accurate, and straight-up enjoyable movie. It's hard to not have a massive smile on your face when this movie wraps. There has always been an annoying "the book was better" crowd attached to 'The Martian', but I have never really cared all that much. This is partly because I have terrible reading-comprehension skills and also because this is one of Matt Damon's best roles and a hell of a good movie from Ridley Scott. (You do have to rent it, though)

Side note, never forget that this movie won for 'Best Comedy or Musical' at the 2017 Golden Globes:

Despite his jokes, 'The Martian', to be fair, was a pretty funny movie at times.
--

68) Steve Jobs (94/100) - Netflix: Big time warning folks: AARON SORKIN ALERT! If you don't like Aaron Sorkin, his writing, his monologues, or any of his projects, I would shy away from 'Steve Jobs'. However, if you're on the other side of the coin, and haven't seen this movie, I would highly suggest diving in. The movie structured in a fairly unique way as it plays out over three pivotal moments in Steve Jobs' career, from 1984 through 1998. It is majorly dialogue-heavy, possibly the most of any mainstream movie from the past 10 years… and damn do I find it captivating. I will say this, I am (outside of 'The Newsroom', a show I despise) a big Aaron Sorkin dork, so take that with a grain of salt, but I also think this is probably Michael Fassbender at his very best. For some reason, his roles have been terrible over the last few years, but 'Steve Jobs' showed, with nonstop complex dialogue throughout the entire movie, that he is one of Hollywood's top actors.
--

84) Tropic Thunder (93/100) - HBO Max: Comedic gold, plain and simple. 'Tropic Thunder' has aged well in a society that loves to tear down comedy. I wrote many words about 'Tropic Thunder' and comedy in 2020 just last month, but, plain and simple, I love this movie. From the opening fake trailers, one of the funniest things ever put into a movie, down to the specific satirical Hollywood moments, it will always be one of the greats from the amazing era of comedies from 2000 through 2009. It has finally hit a streaming platform again with the launch of HBO Max, so I would suggest running to go watch it right now. There are always a few jokes here and there I forget about when I rewatch this classic.
--

89) Coco (93/100) - Disney+: Twitter had a trending topic about Pixar movies earlier this morning, so I figured why not throw on one of their recent successes to today's list. We are about two years removed from 'Coco' being released in theaters, so I think it's finally safe to say that "recency bias" is not really a thing with praising this movie anymore. It's not just good, it's great, and one of Pixar's better original movies. The colors in this movie pop, it's gorgeous to look at, the story is a fucking gut punch but in a really uplifting way. And, come on, the original song "Remember Me" is so damn good…

Just be prepared to cry. Or pretend you didn't cry. (You cried, don't fucking lie)
--

128) Fantastic Mr. Fox (92/100) - Disney+: Seeing this on Disney+ was a shock! I've been wanting to put 'Fantastic Mr. Fox' on this list for a long time, but it was nowhere to stream, and I like to save my "rent" picks for the Top 50. Well, all of a sudden it just popped up on the Mouse's streaming platform the other day, so now one of Wes Anderson's best movies will get a little shine. First off, yes this is a claymation movie. If that's not your thing, this may not work for you, but I think 'Fantastic Mr. Fox' is brilliantly made. So well made that it made Anderson's 'The Isle of Dogs' a bit of a letdown when the movie didn't pack the same wite, pacing, and charm as 'Fox'. The voice-cast is insane, from George Clooney to Bill Murray, Meryl Streep, Willem Dafoe, Owen Wilson, Adrien Brody, and more. And they're backed by one of Anderson's top scripts, one that was also co-written by 'Marriage Story' writer-director Noah Baumbach. As a whole, Wes Anderson movies are tough to suggest sometimes, they're so bizarrely unique and different, as his movies are essentially their own genre. But I think 'Fantastic Mr. Fox' is a pretty solid middle-ground and starting-point if you want to give his movies a try.
--

325) The LEGO Batman Movie (85/100) - HBO Max: What if I told you Will Arnett is one of the best movie Batmans? It seems silly if you haven't seen 'The LEGO Batman Movie', but I promise you he is great in the role. None of the LEGO movies have lived up to the excellence of the first movie, but the Batman version came pretty damn close. It stays relatively true to Batman-lore, has some amazing references, and killer voice-cast that plays off a fast-paced and punchy script. There are a lot of people out there who I think passed on this movie for being a little too niche, but it is quite a fun-delight in my opinion.
--

329) Blood Diamond (85/100) - HBO Max: An insane, moving and intense story, with some fantastic performances, I always felt as though 'Blood Diamond' got a rather unfair critique from critics when it was released in theaters. This remains, quietly, one of Leonardo DiCaprio's best performances, and he does so alongside the likes of great actors in Djimon Hounsou and Jennifer Connelly. It's an incredibly thrilling movie, in a very dark sense of the word. Always forgotten about amongst Leo's best movies, it's hard to go wrong throwing on 'Blood Diamond'.
--

854) Grandma's Boy (67/100) - HBO Go/HBO Max: Lastly, we go very far down the list to a movie that isn't a perfect comedy, but one that is still of the most unfairly reviewed movies ever by critics. This shit has a fucking 16% on Rotten Tomatoes! You're telling me 84% of critics felt this movie was well below the 6.5-7.5 out of 10 thresholds to approve a movie ad fresh? I know what you're saying, too, "Jeff, you dipshit, you only gave it a 67/100 yourself!" Here's the thing, the average score from the critics was a 3.5 out of 10! 'Grandma's Boy' isn't a movie that toed the line, critics despised it! Luckily, audiences had a better sense of humor because, while it has its fault, this movie had plenty of hilarious moments. For all the pure sludge that Happy Madison releases, 'Grandma's Boy' carried some charm and humor that didn't feel like cheap, low-hanging fruit to just pander to audiences. (The trailer was terrible, by the way)

Stay safe this weekend and see everyone next week.