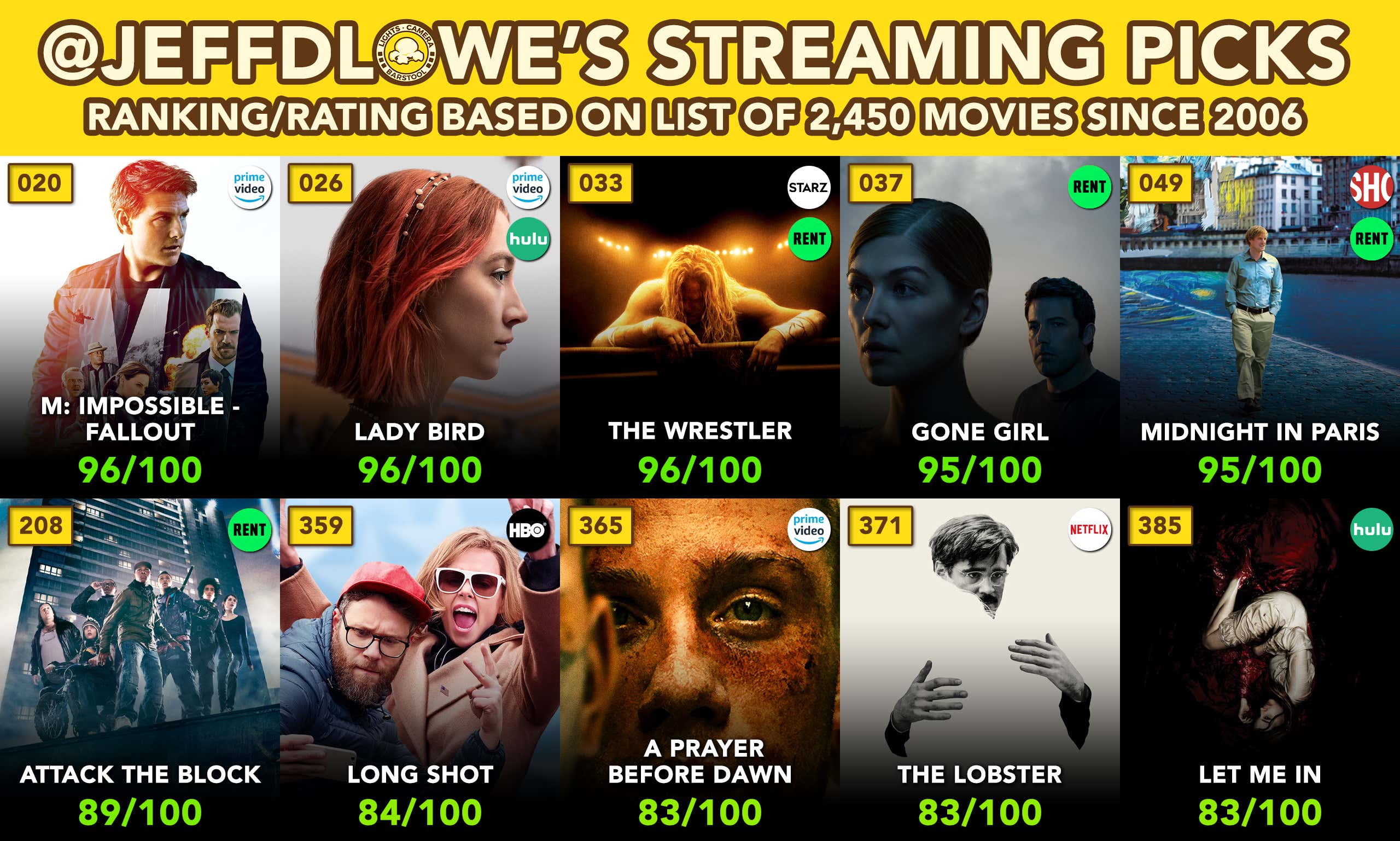 Back again, and this week I am going to pop back up a couple of top picks from my list of Top 50 movies since 2006. Partly because I rewatched them all this week, and also because the amount of really good movies from my rankings on streaming platforms are so few and far between. As a reminder, I also included movies you can only rent on here, which I suggest doing on YouTube, it's a really quick and easy spot to rent movies, but you can really rent them anywhere (Apple, Amazon, Roku, etc.). You can also check out my My Top 50 Movies Since 2006 List, which can be found here.

20) Mission: Impossible - Fallout (96/100) - Amazon Prime Video: I suggest people watch this movie about once every month, so it seems time to do so once again. This is, quite simply, one of the greatest action movies ever made... period. No discussion in my book. No recency bias. It's just that good. No one in the action movie game presents chases, fight scenes, etc. on the big screen better than Christopher McQuarrie and Tom Cruise. This movie, as well as the previous three "newer" Mission: Impossible movies are all fantastic.
--

26) Lady Bird (96/10) - Amazon Prime Video/Hulu: This is what I said about the movie in my Top 50 Since 2006 blog, "Starring my favorite actress Saoirse Ronan, 'Lady Bird' is another movie on this list that does a perfect job at capturing what it is like to be a teenager, this time in the process of experiencing high school. Greta Gerwig flexed her directing chops with this movie and Ronan, as always, crushed her role. Come for the coming-of-age accuracy and stay for "Crash into Me" by Dave Matthews Band."
--

33) The Wrestler (96/100) - Starz/Rent: Another one of my Top 50 movies since 2006, 'The Wrestler' is up there with the GOAT sports movie. This is what I had to say: "'It is quietly one of the best, and grittiest, sports movies ever made. It's Mickey Rourke's career-role and features the timeless Marissa Tomei, what more can you ask for than that right there!? A fair warning to all watching for the first time, though, you might shed a tear or two with this one when you finally toss it on." This one is on Starz, but if you don't have their service, I suggest the rental!
--

37) Gone Girl (95/100) - Rent: If you follow my movie picks, you know I am obsessed with the director-composer combination of David Fincher and Trent Reznor & Atticus Ross. The way their movies look along with the music that injects so much life in them is always awe-inspiring to me. As I said in my Top 50 blog, this movie delivers, "a good ending that will fuck with you and leave you wanting more (or angry)." I hate that this movie isn't on a streaming platform, but you can rent it anywhere right now if you've never seen the movie or want to give it a rewatch.
--

49) Midnight in Paris (95/100) - Showtime/Rent: When it comes to delightful movies, this is it right here. Here's what I had to say in my Top 50 write-up: "Woody Allen aside, 'Midnight In Paris' is a fantastic movie and I am not going to pretend it isn't just because of the shittiness of the person involved with making it. There is a ton of charm with this movie and it is very much Owen Wilson's career-best performance in my eyes. It sparks imagination and a sense of wonder that makes it stand out for me."
--

208) Attack the Block (89/100) - Rent: This British movie, John Boyega's breakout role, has garnered some attention in the United States, but it never really got the love it deserved. Everyone who watches 'Attack the Block' seems to love it. The movie is a pretty insane action-sci-fi-adventure that will leave you asking, "why have I never heard about this movie!?" While Edgar Wright wasn't involved, the movie is from the same producers of movies such as 'Hot Fuzz' and 'Shaun of the Dead', so it shouldn't come as a surprise that this movie delivers on both excellent action and comedy. It's a big "change of pace" movie from the usual releases in its respective genres, so I highly recommend giving it a rent.
--

359) Long Shot (84/100) - HBO Go: It might be a bit of a familiar concept, with the "loser guy" chasing the "gorgeous successful woman," but the chemistry between Rogen and Theron is what makes the movie work so well. The writing is smart and effortless and stays fairly consistent, even if it tapers off in quality a bit at the end. 'Long Shot' felt like a movie that could very well be a dud, but there are plenty of great moments that will give you the rom-com fix you need.
--

365) A Prayer Before Dawn (83/100) - Amazon Prime Video: 'A Prayer Before Dawn' is a boxing movie in a sense that there is boxing involved, but it so much more than that. It's ambitious, gritty, and raw as it tells, "the amazing true story of Billy Moore, an English boxer incarcerated in Thailand's most notorious prison. Thrown into a world of drugs and violence, he finds his best chance to escape is to fight his way out in Muay Thai tournaments." Joe Cole is fantastic in the lead role for a movie that is brutal and certainly not a light watch. It has A24's fingerprints and stamps all over it, this is the type of movie they love to release, and if that is your sort of thing, you will really enjoy the 'A Prayer Before Dawn' experience.
--

371) The Lobster (83/100) - Netflix: Speaking of A24, I present to you another one of their movies: 'The Lobster'. I think someone tweets or DMs me once a week asking my thoughts on this movie. Seriously, I am not making that up for the sake of this blog. They either say they loved the movie, or couldn't believe what the fuck they had just watched. Personally, I enjoyed this weird and wild ride with Colin Farrell and Rachel Weisz… and when I mean weird, I mean it. This is a strange ass movie, but one that may absolutely hook you and keep you locked in right to the very end. There's also a chance you hate this movie early one, shut it off, and get mad at me for even suggesting to watch it. 'The Lobster' is in the "bold art" section of movies and may not be for everyone, but boy oh boy is it, unlike anything I've seen before.
--

385) Let Me In (83/100) - Hulu: Last week I suggested giving the "new" Planet of the Apes franchise a rewatch, largely in part due to its amazing director, Matt Reeves. Well, he made another movie back in 2010, after he made 'Cloverfield', called 'Let Me in' that I believe deserves a watch on Hulu. Any movie that lists its genres like horror, drama, sci-fi, and romance has to be an absolutely wild ride, and 'Let Me In' is more than worth clicking play on. A rare good remake of a successful internal movie (Sweden's 'Let the Right One In'), there is a ruggedness to the movie that gets me excited for Reeves' Batman movie next year. The cast, which includes the likes of Chloë Grace Moretz and Richard Jenkins, is outstanding, and there is an undeniable amount of intrigue and intensity that fills up a pretty solid movie.

Everyone stay safe this holiday weekend, and I'll drop some more movies to check out next week.