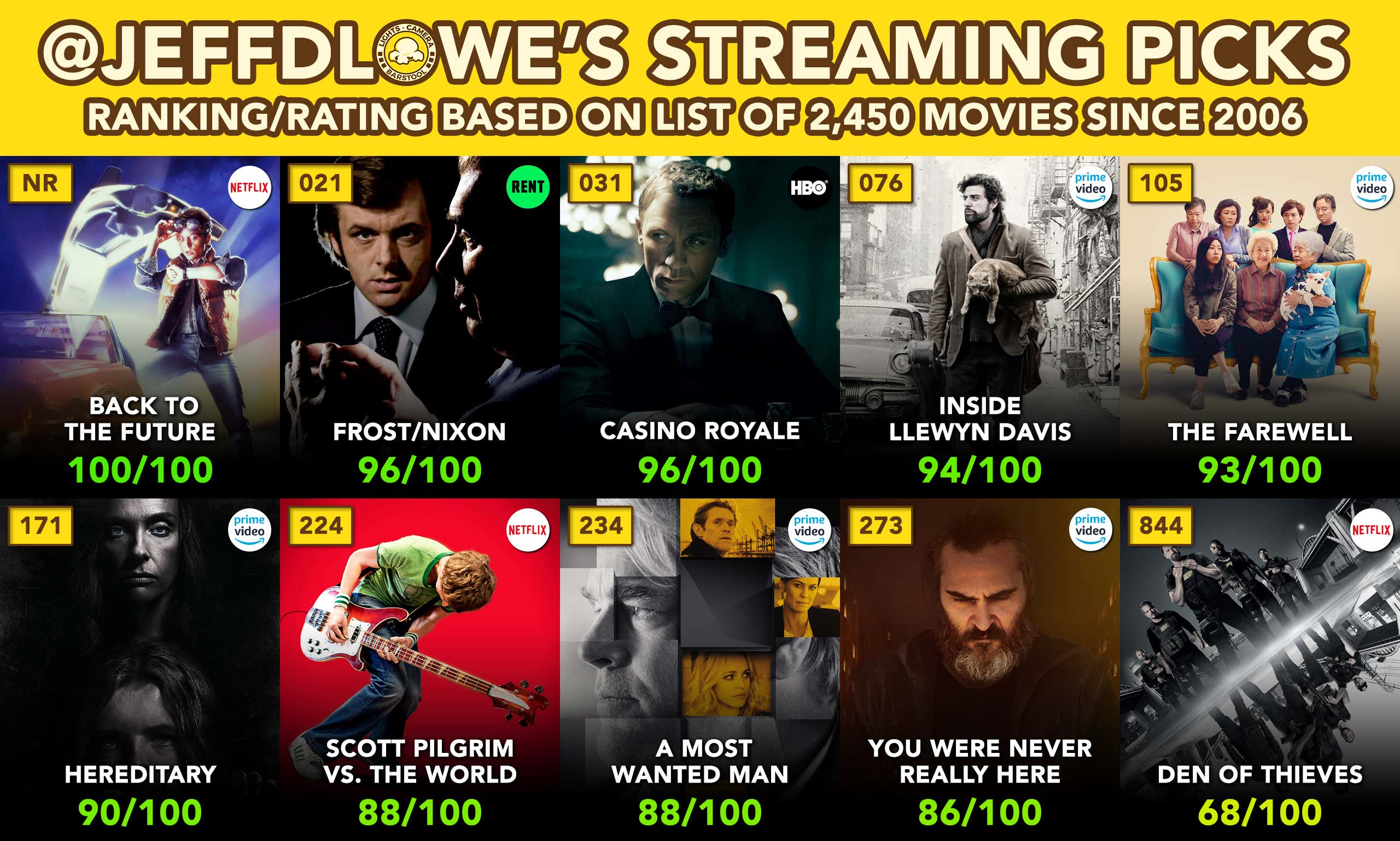 It's a new month, which means we have some fresh movies to add to my weekly streaming suggestions!

Throughout the months there will be more movies added to the popular streaming platforms, so I can finally add some releases that I've dying to suggest. My ten for this week includes a perfect movie in my eyes, Gerard Butler action-schlock, an underappreciated Joaquin Phoenix performance, and more. You can also check out my My Top 50 Movies Since 2006 List, which can be found here.

21) Frost/Nixon (96/100) - Rent (also on Starz): One of my favorite movies that rarely gets talked about, here is what I said when I discussed my Top 50 of the last 15 years: "A damn good political thriller, the fascinating story, and hilarious cast chemistry is likely the result of Ron Howard's best work (outside of 'Arrested Development'). Also, if you're a fan of 'Succession' the movie stars Michael Mcfadayen who plays Tom in the hit HBO show, but you may not recognize him right off the bat in this one. 'Frost/Nixon' can be found on Starz and, if not there, is very much worth a rent."
--

31) Casino Royale (96/100) - HBO Go: With new streaming platforms coming out soon, I actually think 'Casino Royale' may be leaving HBO Go in the near future, so, with 'No Time To Die' on the horizon, watch this movie while you can. Here were my thoughts from my Top 50 countdown: "The best James Bond actor and best James Bond movie in my opinion, sorry if this offends (I'd have a hard time arguing against picking against (Sean Connery). While only every-other movie in the Craig 007 run has been good, the best of the best has been fantastic. A binge-watch of this and 'Skyfall' is a great quarantine activity and you can do so through the rental process or heading over to HBO Go."
--

76) Inside Llewyn Davis (76/100) - Amazon Prime: One of the more "under the radar" Coen Brothers movie, 'Inside Llewyn Davis' was one of my favorite movies from the year 2013. With a fucking stellar cast, including pre-Star Wars Oscar Isaac and Adam Driver, this is a pure character study in the form of a black comedy from two of the industry's most unique minds. "Melancholy" is a word often used to describe this movie, which I think is fair, but I would go with the word "unique." Just take a look at the visual style of the movie for starters! There aren't many things like 'Llewyn Davis' and it's a pretty fantastic change of pace with a ton of enjoyable moments, including…

…what a perfectly weird, yet awesome, scene.
--

105) The Farewell (93/100) - Amazon Prime: 'The Farewell' might be the most snubbed movie when it comes to Oscar nominations for the year 2019. The movie didn't get a Best Picture nomination but, more shockingly, Awkwafina (who won at the Golden Globes!) wasn't even nominated for Best Actress. This movie is a dynamic family story from top to bottom with a great blend of dramatic and comedic moments. Awkwafina's best role to date is sentimental and glowingly relatable. This is not a movie you should watch if you aren't in the mood for a few laughs and many cries.
--

171) Hereditary (90/100) - Amazon Prime: Before he did 'Midsommar', writer-director Ari Aster did 'Hereditary' and there are many people who prefer this movie. Toni Collette's lead role is one of the more underappreciated performances of the last five years and this movie is an absolute experience. I wouldn't consider 'Hereditary' a hidden gem or anything, but I still think plenty more people need to check it out. It's an incredibly upsetting movie that will knock you out of kilter, but that is the brilliance of the movie for me. You can probably consider the movie to be more of a drama than a horror movie, but the sick and twisted thing is that the drama is so deeply rooted in the horror of the story.
--

224) Scott Pilgrim vs. The World (88/100) - Netflix: This movie fucking rules so hard. That shouldn't come as a shock, either, because it is from Edgar Wright, who has done so many classics from 'Shaun of the Dea', to 'Hot Fuzz' and 'Baby Driver'. His distinct and incredibly enjoyable style oozes out of this comic book movie that rivals 'Spider-Man: Into the Spider-Verse' when it comes to making it look like actual living comic pages. It's funny, sharp, and an absolute fucking blast. If you've never seen 'Scott Pilgrim vs. The World', I'd check it out as soon as possible, even if you don't normally care for comic book movies. Come for the action-comedy comic book movie, stay for the douchebag Chris Evans role.
--

234) A Most Wanted Man (88/100) - Amazon Prime: First off, big rest in peace to the legend Philip Seymour Hoffman. 'A Most Wanted Man' was the last movie he starred in to be released during his lifetime and, really, his last very significant role ('The Hunger Games: Mockingjay' movies were posthumous releases). I really think this is a very good espionage suspense-thriller that I've grown to enjoy more and more over time. It's definitely something I would classify as a "slow burn," but the piece-by-piece way in which it plays out is why I enjoy it so much. The movie has plenty of intense that keep you more than invested as everything plays out. 'A Most Wanted Man' certainly isn't for everything, but if you want a movie that has a long hard bite of a story, I'd dive into this on Amazon Prime.
--

273) You Were Never Really Here (86/100) - Amazon Prime: An incredibly tense and personal role, these are the type of performances that make me love Joaquin Phoenix. A thriller, a mystery, and just fantastic to look at visually and technically speaking, director Lynne Ramsay will have you feeling the intensity of this movie in your bones. It's a roller coast and a journey, in the best sense of the words, that will disorient and upset you, but if you can accept that as its intension, you'll thoroughly enjoy the experience.
--

844) Den of Thieves (68/100) - Netflix: Sometimes you just need to sit down and watch really awesome, Gerard Butler schlock. I wouldn't call 'Den of Thieves' a good movie, but I very much would not call it a bad movie. It's fairly self-aware and exists to entertain with an enjoyable, and gritty, heist-thriller story. Some of the performances feel rather below-average, but they're all pretty easy to look past. The story is good, it makes sense, and when it comes to movies like this, after sprinkling in some great action, is there much more you can for from a Gerard Butler release?
--

I'll have ten more movies next week. Have a good weekend and stay safe everyone.