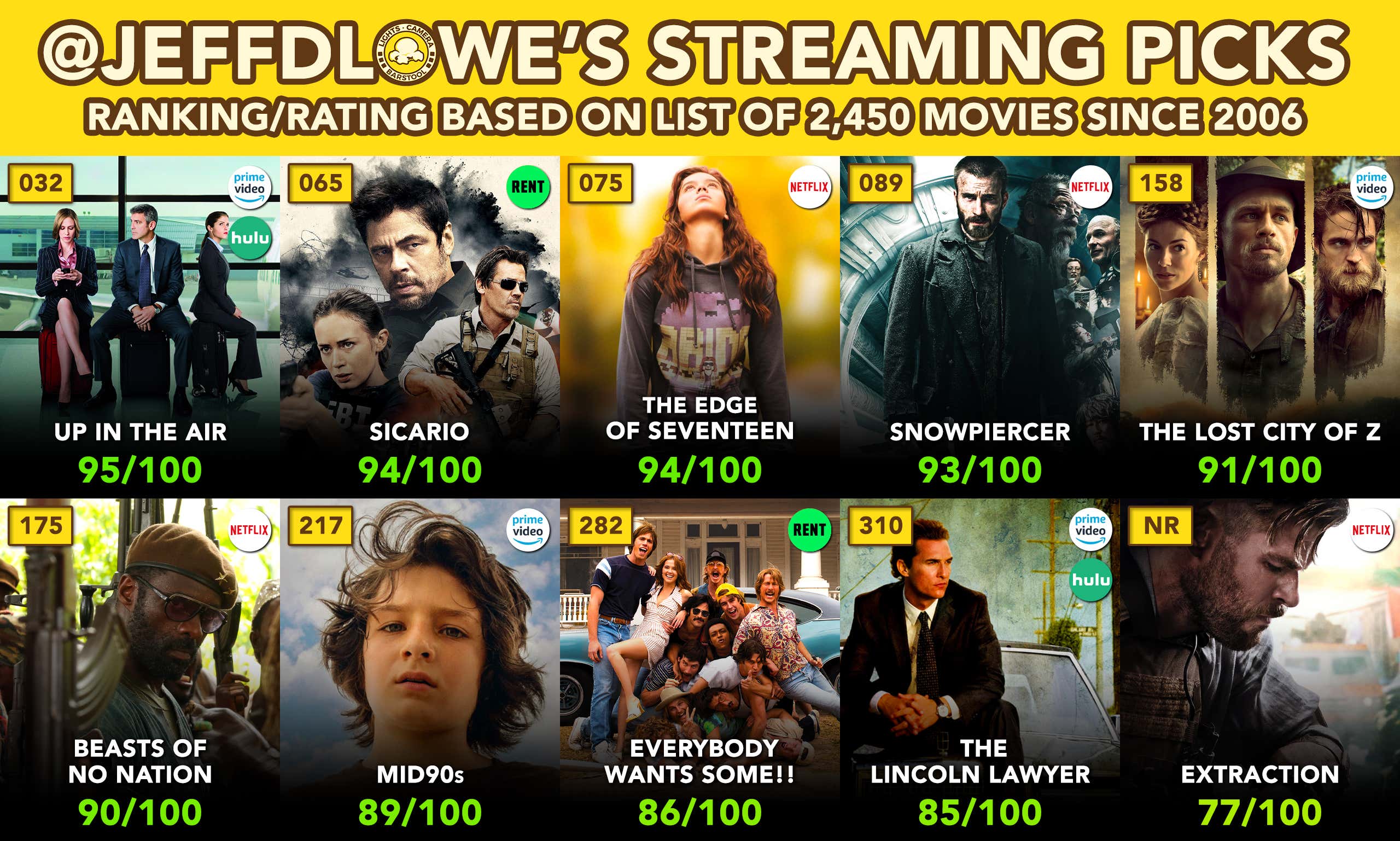 We are back again with some streaming suggestions!

With "live sports" winding down as the NFL Draft comes to a close, it's time we get back to watching movies. I really like my list of movies this week, with a few of them being decently-well-known but ones you should definitely check out if you haven't seen them. There is also a new movie on the list called 'Extraction', which just dropped on Netflix. You can also check out my My Top 50 Movies Since 2006 List, which can be found here.

32) Up in the Air (95/100) - Amazon Prime/Hulu: This is what I said in my Top 50 write-up: "Okay, honestly, this might not be the best movie to watch if you're feeling lonely in quarantine, but it is one of my favorites and a really great movie. The odd-couple chemistry between George Clooney and Anna Kendrick is off the charts and it has a weirdly affective way of romanticizing traveling and flying. My favorite scene, personally, is the Clooney and Kendrick back-and-forth about efficiently navigating an airport and going through security."
--

65) Sicario (94/100) - Rent: You can only rent this movie right now, but I felt the need to include another Taylor Sheridan movie on the list. 'Sicario' is a fucking gem and is still, somehow, oddly slept on? The movie is an explosive thriller that will have you on edge with its intensity throughout. It's led by a dynamite cast that includes Emily Blunt, Josh Brolin, Benicio del Toro, and Jon Bernthal. Sheridan penned the script but Denis Villeneuve (the director of 'Blade Runner 2049', 'Arrival', the 'Dune' re-make, and more) was behind the camera and the greatest living cinematographer Roger Deakins had a hand in the movie. It's a gorgeous effort from everyone involved and packs a fucking punch when it comes to the story. I will always suggest a movie that comes from any combo of Taylor Sheridan, Denis Villeneuve, and Roger Deakins.
--

75) The Edge of Seventeen (94/100) - Netflix: There are few genres more played-out and boring than the coming-of-age genre. But we can make an exception for 'The Edge of Seventeen', which was one of the better movies I watched from the year 2016. A filled cast from Hailee Steinfeld to Woody Harrelson helps deliver on a pointed script emotionally that also packs some great comedy. But Steinfeld is the one who truly steals the show in the lead role for this relatable, and very enjoyable, coming-of-age dramedy. I think it sets itself apart enough from the crowd where even those who may not love the genre should enjoy this movie.
--

89) Snowpiercer (93/100) - Netflix: This is one of those movies that is definitely on the popular or "well-known" side at this point, but it is from 'Parasite' director Bong Joon-ho and has a prequel series about it releasing in May of this year. Bong's 'Snowpiercer' is a spectacle in a way only Bong knows how to make. Not many directors can find a way to stick the landing on a movie and story that attempts to seamlessly weave together action and class issues. It's a heavy subject, yet masterfully put together in a way to keeps all of its appeals as a mash-up of a sci-fi-action-thriller. Not to mention it's always cool to see Chris Evans in a big-time role that isn't Captain America.
--

158) The Lost City of Z (91/100) - Amazon Prime: My mission to educate people on the talent of Robert Pattinson continues as I suggest you give 'The Lost City of Z' on Amazon Prime a try. Pattinson is also joined in this exploration epic by Charlie Hunnam (the lead in the movie), Tom Holland, and Sienna Miller. I thoroughly enjoy this movie every time I throw it on, it's a slower-moving personal journey which shouldn't be surprised considering the director. James Gray did 'The Lost City of Z' and recently did the Brad Pitt space movie 'Ad Astra', so keep that in mind if you're thinking about tossing this on Amazon Prime.
--

175) Beasts of No Nation (90/100) - Netflix: Idris Elba. Sold? That's usually a good start whenever trying to suggest a movie to someone, but if you need more, I can elaborate. I firmly believe 'Beasts of No Nation' would have received more mainstream praise had it been released within the last two years. This was a Netflix-released movie, but it came out five years ago, back when the stigma of being on a "streaming platform" weighed down movie's reputations. This was so much the case that I am pretty sure it blocked Idris Elba from getting a well-deserved Best Actor nomination for his role in the movie. A very humanizing war story, 'Beasts of No Nation' is also a great example of work from Cary Jojio Fukunaga, who directed the upcoming James Bond movie 'No Time To Die'.
--

217) mid90s (89/100) - Amazon: The writer-director debut for Jonah Hill was a cookie-cutter A24 movie and I mean that in the absolute best way. It's super artistic with its own style, and that may be a turn-off for some, but I found this to be a fun, yet emotionally striking slice-of-life movie. It's raw, gritty, and comes with a story that packs more realism than most coming-of-age movies. There are some movies that I sometimes can’t suggest for everyone, but ‘mid90s’ has something for just about any moviegoer. Even if you didn’t grow up in the 1990s, Jonah Hill does a fantastic job of laying out a slice of what it is like to be a kid with the obstacles of growing up.
--

282) Everybody Wants Some!! (86/100) - Rent: Rent this movie! Please! Spend the $3.00 or $4.00 it costs! This movie is such an underrated and, worst of all, under-seen comedy movie. From Richard Linklater comes a very-Richard Linklater movie set around a college baseball team with a cast full of young stars from Wyatt Russell to Zoey Deutch, and Blake Jenner. It's a simple movie with a ton of laughs but doesn't sacrifice any heart. 'Everybody Wants Some!!' might be set in the 1970s but it feels like a story that everyone can connect with on some level.
--

310) The Lincoln Lawyer (85/100) - Amazon Prime, Hulu: Matthew McConaughey's 'The Lincoln Lawyer' is the definition of a cable TV, TNT or TBS movie. If you have cable or access to these channels, you have seen this movie on TV at one point or another. The best way to describe this movie is by calling it "really fucking solid," it is no masterpiece but it is a damn good movie. This was right before McConaughey's transition into a serious, Oscar-winning actor and he really shows off his acting chops here. The movie doesn't have a story that will knock your socks off, but it is well written and has a dynamite list of cast members that includes Marisa Tomei, John Leguizamo, Ryan Phillippe, Michael Pena, Bryan Cranston, and William H. Macy.
--

NR) Extraction (77/100) - Netflix: This is a 2020 movie, so I have no ranking on it, but I highly suggest 'Extraction' if you want to add a little fun to your evening movie watching time. 'Avengers' masterminds Joe & Chris Russo teamed up with stuntman (and 'Avengers' second unit director) Sam Hargrave to bring you a fucking badass, in-your-face action movie starring Chris Hemsworth. This is a movie that knows exactly what it wants to be. It isn't here to win Oscars, it's here to entertain and deliver on fucking insane action sequences. There is one memorable extended sequence that will absolutely blow your mind.
--

That's it! Ten more next week! Have a good weekend and stay safe everyone.