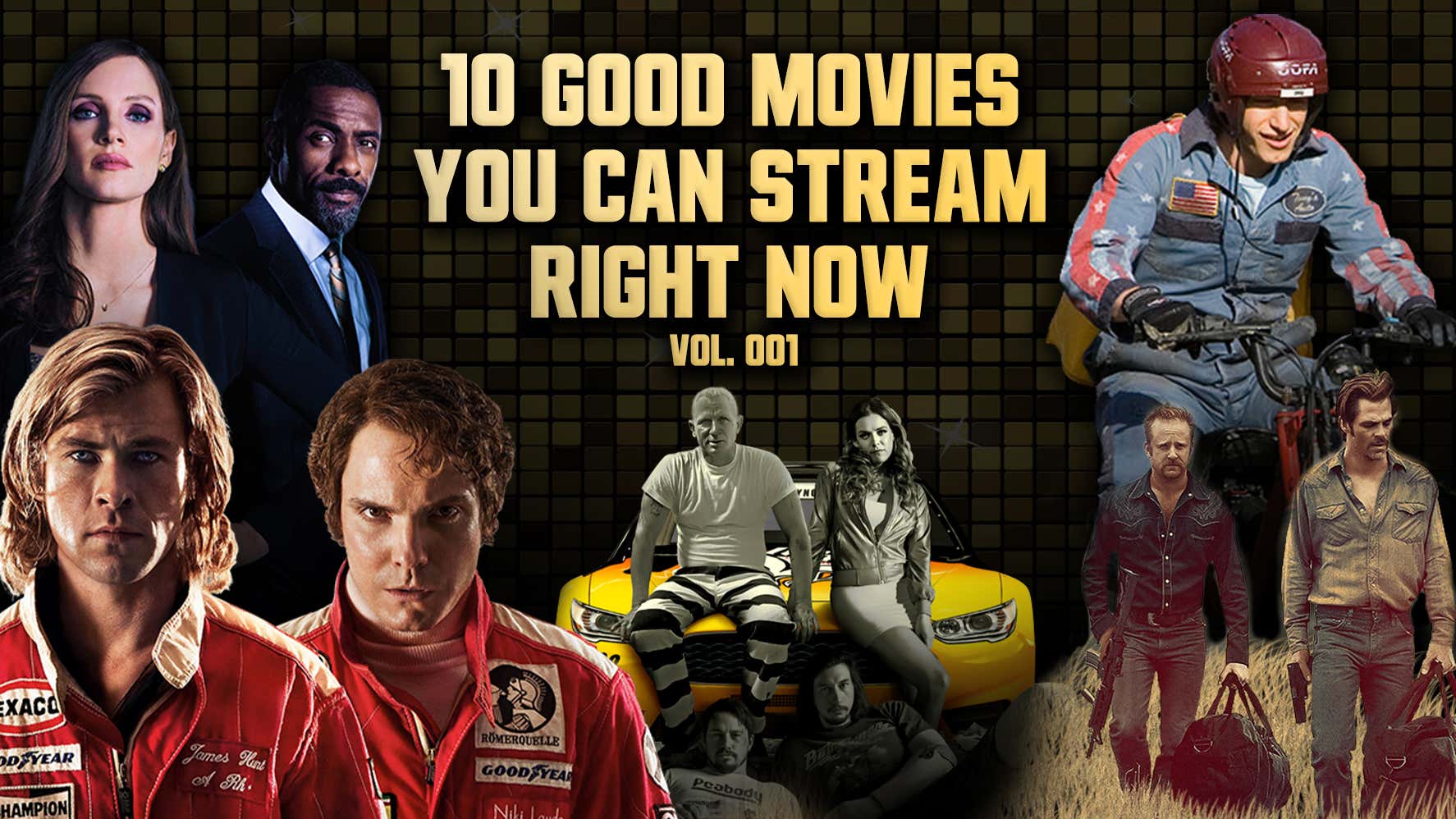 There is so much time to be had and more than enough movies to fill in the gaps right now. I decided to select 10 movies I really like from my ranking list of over 2,450 movies since 2016 and let you know where you can stream them right now. A few of these you may know, and the first one on the list was nominated for a Best Picture Oscar, but I wanted to stick with movies that I know people like but have possibly slipped under the radar for some folks. Let's get into it...

NOTE: The ranking is out of the nearly 2,450 movies I have ranked and everything is rated on a scale of 0-100 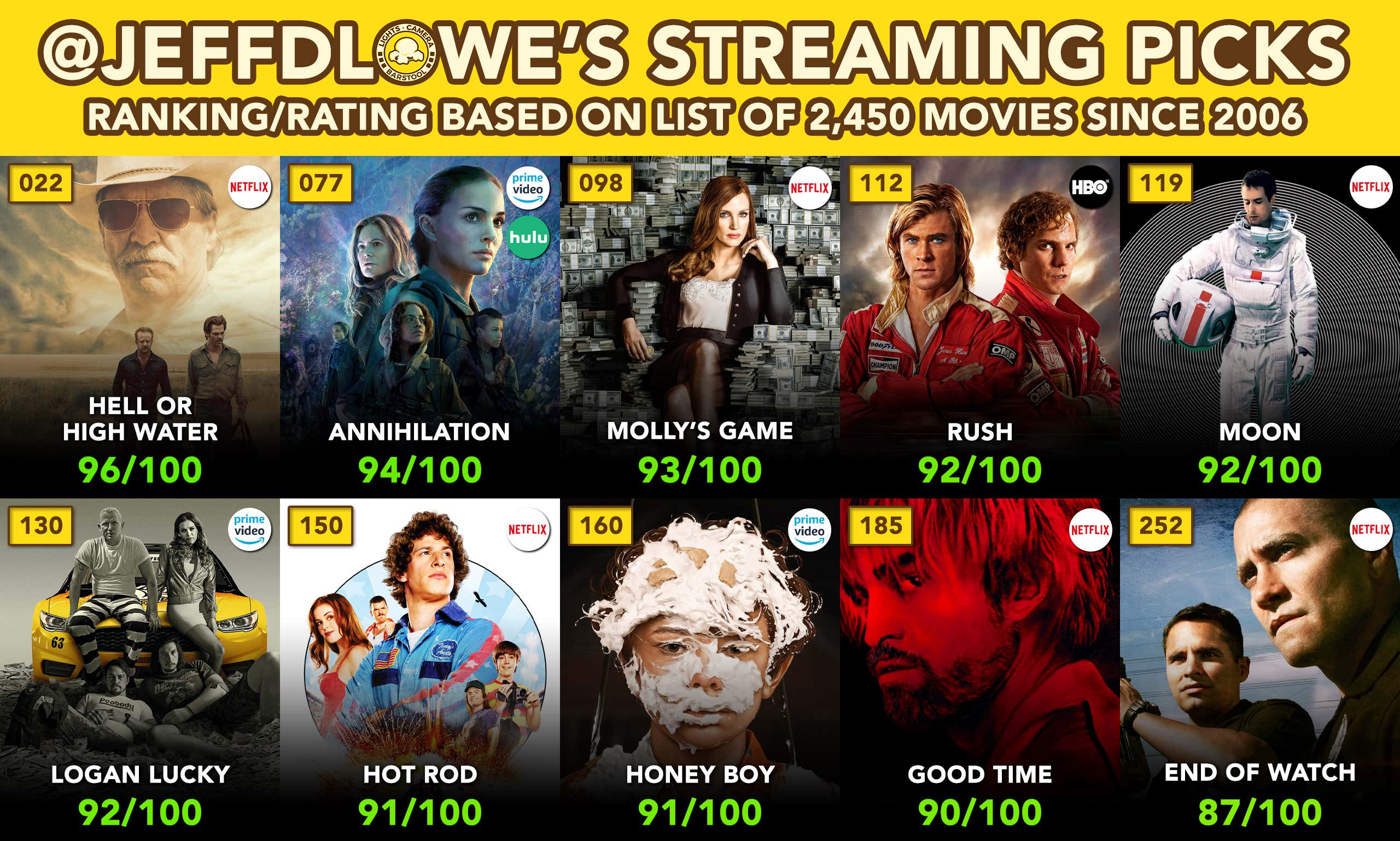 22) Hell or High Water (96/100) - Netflix: This Taylor Sheridan neo-western features one of the most fucking insane third acts you'll find in any movie. Overall, his entire library of movies is fantastic, even the 'Sicario' follow-up that I didn't care for all that much. 'Hell or High Water' has a ridiculous amount of intensity, but also heartfelt, softer moments that really throw you for a cowboy roller coaster ride. It's entertaining a hell and will also get your brain flying a mile a minute when it wraps up. This West Texas thriller is my favorite work of Sheridan, who rides a horse around his sets, and should be your streaming choice on Netflix as soon as possible if you haven't seen it.
--

77) Annihilation (94/100) - Amazon Prime Video, Hulu: A slow-burn, yet visually stunning sci-fi movie, 'Annihilation' will get the wheels turning in your head. It's a thought-provoking movie and while that may not be exactly what everyone wants right now, it's a nice change of pace from your average cookie-cutter blockbuster. There is also a fucking horrifying scene that will give you quite the jolt (now you'll be even more on edge). 'Annihilation' is an experience and, if you enjoy it, the movie will stick with you days after your viewing. It didn't get a ton of mainstream love and left the theaters rather quickly a few years back, so it has certainly flown under the radar for the most part. This movie won't be for everyone, but if you like sci-fi and something that feels a little different, head over to Amazon Prime or Hulu and check it out.
--

98) Molly's Game (93/100) - Netflix: As a giant 'West Wing' fan, I can easily admit I am a huge Aaron Sorkin dweeb. I don't love all of his work, but I am usually sucked in nearly every time he puts the pen to paper. With 'Molly's Game' you have a fucking insane true story and the directorial debut from the aforementioned Sorkin. Oh, did I mention it also stars Jessica Chastain and Idris Elba? The movie didn't receive enough buzz or Oscar push for Chastain to receive a nomination, but, as always, she was damn good in this movie. It's dialogue-heavy, like all things Sorkin, but I think most people checking this out for the first time will really enjoy it.
--

112) Rush (92/100) - Netflix: I know 2019 had the fantastic racing movie 'Ford v Ferrari', but if I had to pick the best racing movie of the 2000s, I'd have to side with 'Rush'. Ron Howard puts you smack dab in the middle of these races and it feels as authentic as a sports movie can get. The true story is heartbreaking, yet inspiring, and it never really falls into your classic corny sports movie cliches or tropes. Marvel alums Daniel Bruhl and Chris Hemsworth are great in the lead roles and this was the first movie I remember seeing where it was clear that the God of Thunder himself had some acting chops.
--

119) Moon (92/100) - Netflix: Uh, this might need to come with an "isolation" warning for those alone in quarantine but 'Moon' is one hell of an awesome sci-fi movie. Think of this movie as a far darker version of 'The Martian' or 'Ad Astra' when it comes to being "alone in space." It's a trippy story that will keep you guessing and entertained right up until the very end. There's also the obvious pull this movie has: Sam Rockwell. You ever see Sam Rockwell turn in a bad performance? No? Exactly. The guy is a fucking stud.
--

130) Logan Lucky (92/100) - Amazon Prime Video: This might be the most fun movie on my list! Dubbed 'Ocean's 7-Eleven' because of Steve Soderbergh (the same director of the famous Las Vegas heist franchise) making the movie and its stripped-down, West Virginia theme and style, 'Logan Lucky' is an absolute blast. Channing Tatum, Adam Driver, and Riley Keough are all great. Come for the awesome heist setup and crazy Seth MacFarlane role, but stay for Daniel Craig's bananas southern accent and demeanor. This movie is a real treat and you can find it on Amazon Prime Video right now.
--

150) Hot Rod (91/100) - Netflix: 'Hot Rod' is an absolute gem and, up until recently, was a diamond in the rough for years. The movie has started to receive far more mainstream praise than it used to get, but there are still plenty of people who have never experienced this great comedy. I won't even say much more or spoil any of the jokes because if you need a laugh, this is absolutely the best movie on this list to throw on. Whether you have seen 'Hot Rod' before, or not, I'd suggest firing this up on Netflix as soon as possible.
--

160) Honey Boy (91/100) - Amazon Prime Video: The last movie I saw in 2019, 'Honey Boy' is a brilliantly made movie with a beautiful story from Shia LaBeouf. It's such a personal, raw movie and I was completely entranced by it. 'Honey Boy' breaks down the walls of the conventional biographical drama and paints an artistic picture of LaBeouf's life growing up in Hollywood. From the director Alma Har'el to a strong cast led by LaBeouf, Lucas Hedges, and Noah Jope, 'Honey Boy' deserved a ton more love last year. Luckily, despite a late release, this one is already up on a streaming platform for you to go and watch.
--

185) Good Time (90/100) - Netflix: 'Uncut Gems' was possibly the most divisive movie of 2019, but no matter where you landed on the quality of the movie (I loved it), everyone could again that it was a batshit crazy movie. Well, let me tell you something, the Safdie Brothers actually made another insane movie a few years back called 'Good Time'. The movie, which is physical proof that Robert Pattinson is a really good actor, will give you the same anxiety and white-knuckle tension experienced with 'Uncut Gems' but with a whole different story. You will not get a normal, bland movie from the Safdie Brothers and that is especially the case with 'Good Time', which can be found on Netflix.
--

252) End of Watch (87/100) - Netflix: It wouldn't be a list of movies from me without something starring Jake Gyllenhaal. 'End of Watch', from director David Ayer, has been out for almost 10 years now, but I think it's still very much forgotten about. The realistic and gritty way in which the movie is shot will have you thinking you're just watching a day-in-the-life documentary of police officers. 'End of Watch', which also stars Anna Kendrick and Michael Pena, dials the energy up all the way past 100% and never really lets up. It's an exciting ass movie that will fly by with a short, fantastically paced runtime of around an hour and a half. If you need a thrilling cop movie to watch at night or over the weekend, here's your pick.
--

That's all I have for you right now, but next week I'll drop another 10 movie suggestions that you can find on streaming platforms!

Have a good weekend and stay safe everyone.