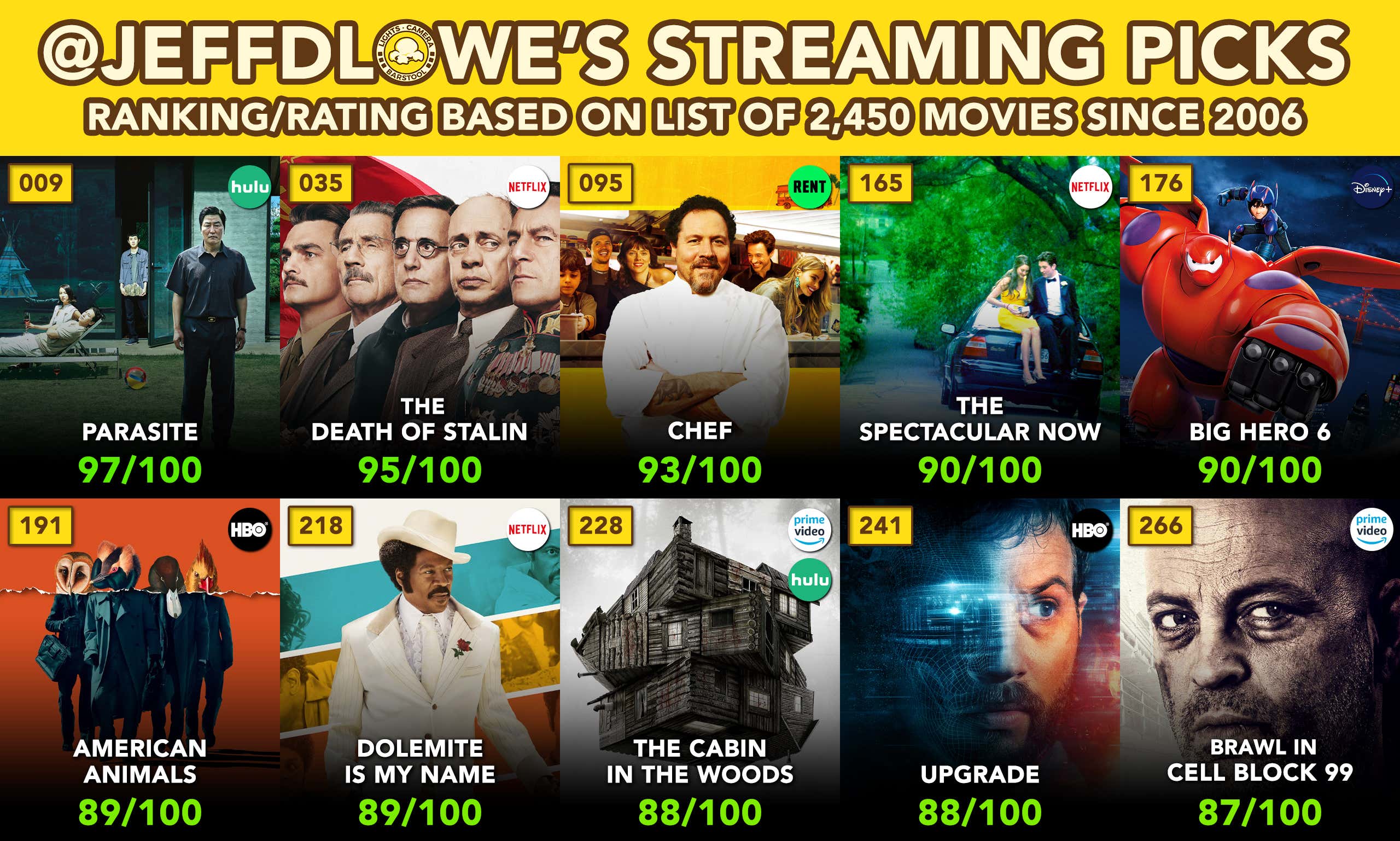 We are back! Last week I gave you 10 movies from my master list of over 2,450 movies ranked since 2006 that you can stream right now while stuck quarantined at home. Let's keep the train rolling with another movie I can pretty confidently describe as "good" to "great." I did cheat a bit and include movies from My Top 50 since 2006, which can be found here, but both have now hit streaming platforms so I decided to re-visit them.

09) Parasite (97/100) - Hulu: I mean, it's 'Parasite', by now you know all about this movie. But guess what... it's finally on a streaming platform with an exclusive deal that placed it right onto Hulu. Bong Joon-Ho Oscar-winning 'Parasite' is a movie that is an amazing mash-up of a handful of genres that will keep you on your toes until the movie ends. This movie is an absolute slam dunk. If you haven't seen, I want to know what you're waiting for, and if you have, why not give it another go? Also, don't worry about the subtitles, you won't even realize they're there after a while (Team Subtitles on Everything). (FULL REVIEW)
--

35) The Death of Stalin (95/100) - Netflix: I said all of the following words about this movie a few weeks ago, but now the big difference is that you can find it on Netflix. This movie is so fucking hilarious and will be a pleasant surprise for anyone who watches it for the first time. It's dark as hell but will have you with tears in your eyes throughout. From Armando Iannucci, the creator of 'VEEP', the choice to have all of the actors keep their natural-born accents added so much to the movie's charm and humor.
--

95) Chef (93/100) - Rent: This might be a tad cruel because we all can't really leave our homes, but 'Chef' is the most delicious looking movie involving food ever made. Yes, I am cheating, you can only currently rent this movie, but I highly suggest giving this feel-good movie a go. It's become a cult hit over the years for its incredible cooking scenes and is just a ball of fun. If you need a new go-to "cheer me up" movie, then 'Chef' might be the pick for you… even if you can only rent it right now.
--

165) The Spectacular Now (90/100) - Netflix: This is a great choice if you need an at-home quarantined date night movie, especially considering its ease of access on Netflix. Miles Teller (big fan of Barstool's own Glenny Balls) and Shailene Woodley are great in the coming-of-age movie that bucks the normal cliches of the usually-played-out genre. It's emotional at times and also touching, it's a different journey than the other movies on this list. 'The Spectacular Now' is a movie that will stick with you, so you have to be in the right mood, but it's a fantastic effort and well worth a watch if you haven't seen it. This was also one of the first movies to kick-off A24's run of great releases over the last seven years.
--

176) Big Hero 6 (90/100) - Disney+: People often forget that 'Big Hero 6' is both a Marvel property and also won Best Animated Feature at the Oscars. It's a thrilling comic book movie with dynamite animation that leaps off of the screen. You'll get that Marvel action you desire but also get served up a helping of Disney's finest emotional animated movie offerings. As I've said for a while, I hope Disney and Pixar focus more on these fresher animated takes than the sequels that are making them a boatload of cash. Crazy thought, I know.
--

191) American Animals (89/100) - HBO Go: Now this right here is a hidden gem. Based on a fucking banans true story, 'American Animals' boasts a story that should have you right up on the edge of your seat. It's a thrilling crime-heist movie that didn't receive much love in 2018 and was, oddly enough, brought into theaters by MoviePass. The movie is eye-opening and feels incredibly real and is a great watch. A charismatic cast with the likes of Evan Peters, Blake Jenner and more is just one of the many reasons to check out this movie that not many people have even seen.
--

218) Dolemite Is My Name (89/100) - Netflix: The cast is stellar, but Eddie Murphy stands out with one of the year's best performances. You could probably make a fairly compelling argument that he should have received a Best Actor nomination for the role at the Oscars. This movie will have you grinning ear-to-ear, and while it carries some biopic cliches, the movie is fantastically made and hits almost all of its comedic beats. The fact this movie landed on Netflix should have been a blessing for the company and I wish it got a bit more shine.
--

228) The Cabin In The Woods (88/100) - Amazon Prime Video, Hulu: If you're looking for a wild and unique experience, and also okay with a little horror, definitely check out 'The Cabin In The Woods'. The horror-comedy-thriller has been out for a while now and has created a handful of growing buzz over the years, but I still think the movie is fairly slept on. It has a few twists that will garner some "oh shit" reactions if you don't see them coming. Random roles from Chris Hemsworth, Richard Jenkins, and Bradley Whitford should also give you a good chuckle. Definitely experience this movie if you're looking for something out there and fun.
--

241) Upgrade (88/100) - HBO Go: Here is what I said in my review of the movie a few years back: Blumhouse is the Adam Dunn of movie studios in a sense that it’ll more than likely strikeout, but every now and then it’ll hit an absolute fucking bomb to straightaway center. ‘Upgrade’ is basically a ‘6 Million Dollar Man’ horror movie, which I believe the director was even quoted as saying. This movie is flat out awesome and a rare example that you don’t need a perfect script or actor to be a fantastic movie. Another movie that I would classify as "straight-up fun," 'Upgrade' is sort of like a modern-day Frankenstein movie, which makes it all the more of a good time.
--

266) Brawl in Cell Block 99 (87/100) - Amazon Prime Video: This is easily the most slept-on movie on my list of 10 movies. The story is a fucking adrenaline kick with intense, in-your-face violence and a killer performance from Vince Vaughn. 'Brawl in Cell Block 99' is the raw meat of movies and I thoroughly enjoyed it. Director S. Craig Zahler, who also did 'Bone Tomahawk' and 'Dragged Across Concrete' cranks out a really gritty piece of art with this one. It's sort of crazy that this movie didn't get a little more love, because it is certainly one that sticks out amidst the type of projects we are used to seeing on the big screen these days.
--

That's it! Ten more next week, but, for now, have a good weekend and stay safe everyone.