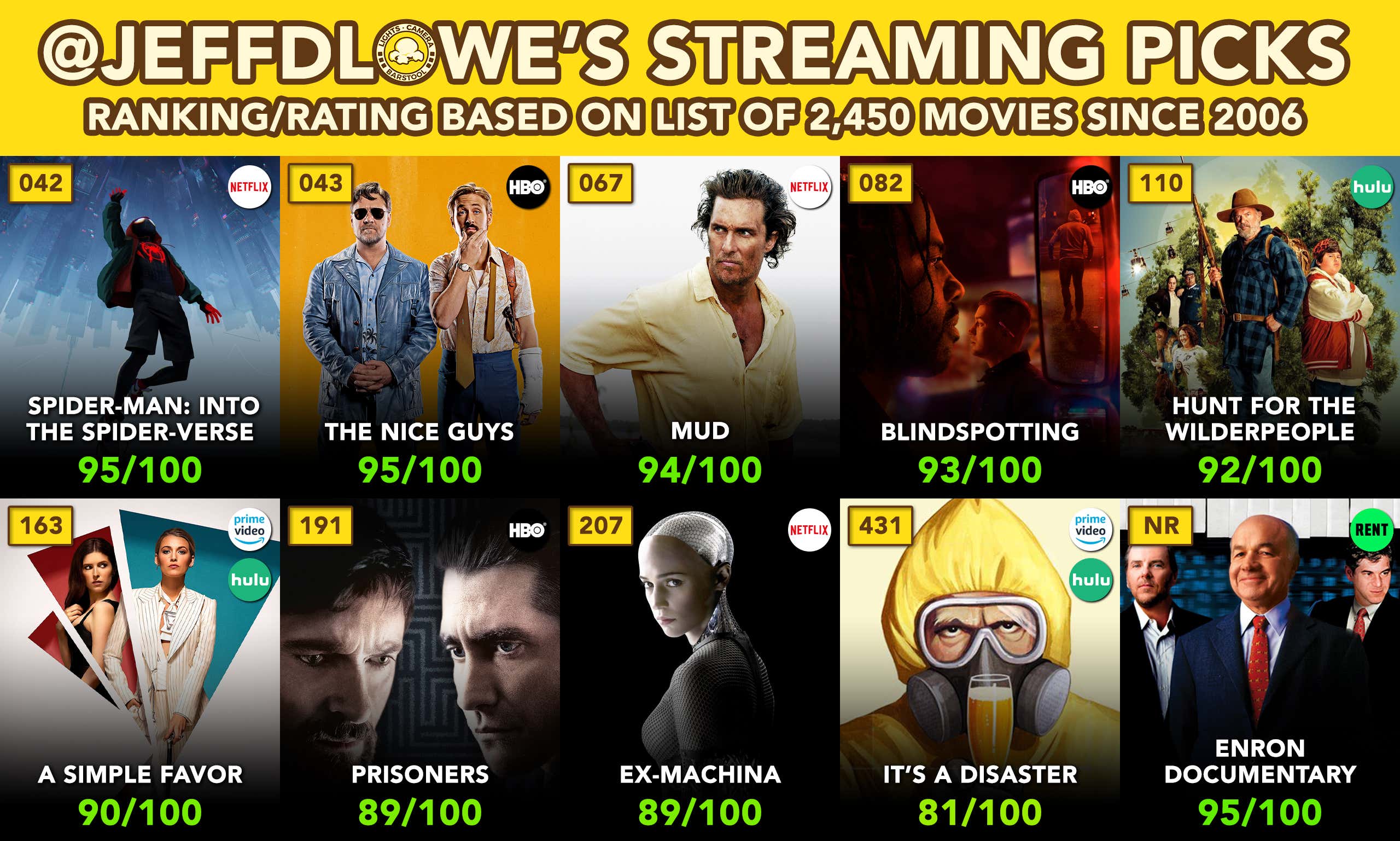 I don't know what that opening line is, but I think I am losing my mind in quarantine? Last week I dished out another 10 movies from my master list of over 2,450 movies ranked since 2006 that you can stream right now while stuck quarantined at home. I have another ten movies I think most people will enjoy, with one of them being my all-time favorite documentary. I did cheat a bit and include movies from You can also check out my My Top 50 Movies Since 2006 List, which can be found here.

42) Spider-Man: Into the Spider-Verse (95/100) - Netflix: This is the best Marvel property movie ever made in my opinion and the second-best comic book movie released in theaters just behind 'The Dark Knight'. It's an awesome story, packed with breathtaking visuals and is the best attempt at having a comic book play out like actual comic panels on screen. You absolutely can't go wrong with this movie and I even think non-comic book movie fans would love it. I am a pretty understanding guy when it comes to differing movie opinions, but I don't think I could ever comprehend someone not liking 'Into the Spider-Verse'. There is also a requirement for me to post this scene...

43) The Nice Guys (95/100) - HBO: No movie on my list of top movies needs a sequel more than 'The Nice Guys' needs one. The duo of Gosling and Russell Crowe is beyond incredible in this movie. They should use their chemistry to teach people at acting schools across the world. I'll say it again, Ryan Gosling's timing is severely underrated and he should be offered more roles that have him delivering comedic lines. The best news is that HBO recently added this movie to its library, so make sure to check it out before they inevitably take it off. (There are so many good movies that sit on no platform whatsoever, which is insane to me)
--

67) Mud (94/100) - Netflix: 'Mud' was a really good fucking movie when it came out, and it has remained that way since its release a few years back. Any fan of Matthew McConaughey should make sure to check this one out, which is conveniently on Netflix because you could argue this is the Academy Award winner's best role. There's a great mix of coming-of-age, romance, drama, and some genre-bending twists-and-turns along the way. A movie with this many feelings and emotion, it helps that the likes of Michael Shannon and Reese Witherspoon add to McConaughey and the great cast. Director Jeff Nichols also has two other really solid movies from the last decade with the likes of 'Take Shelter' (also starring Michael Shannon) and 'Midnight Special'.
--

82) Blindspotting (93/100) - HBO: The most underappreciated movie of 2018, 'Blindspotting' still hasn't garnered the attention that it deserves. ‘Blindspotting’ gives a deep look at society, with elements that put real-life horrors and struggles into perspective, but is just as funny as it is emotional. Black or white, rich or poor, the movie takes on every social and life issue possible and makes it work, which isn't easy to do without seeming overly-forced. Daveed Diggs and Rafael Casal nailed both the acting and writing for this hidden gem on HBO.
--

110) Hunt for the Wilderpeople (92/100) - Hulu: This may be all I need to say to convince people to watch this movie: Taika Waititi. The movie Waititi did in-between 'What We Do In The Shadows' (on FXX, I believe) and 'Thor: Ragnarok', 'Hunt for the Wilderpeople' is criminally slept on at this point, especially considering this is the Oscar winner's most acclaimed movie by both critics and audiences. A classic adventure story of a young kid teaching an "old dog" some new tricks, and the other way around, the movie really is fantastic. The lead actor's Sam Neill and Julian Dennison's chemistry is infectious and you'll fall in love with the duo from the start.
--

163) A Simple Favor (90/100) - Amazon Prime, Hulu: Very much a surprise movie from 2018, ‘A Simple Favor’ is a fantastic “whodunnit?” that keeps you guessing and engaged with its insane characters. The contrasting duo of Anna Kendrick and Blake Lively is one you didn't know you needed in a wild comedy-thriller. Paul Feig deserves a ton of credit for this movie and it served as a nice bounce-back for him following that fucking horrendous 'Ghostbusters' reboot that wasted away a stellar cast. 'A Simple Favor' is a movie that has all the qualities of a fun popcorn movie, but is also incredibly well made. Lastly, shoutout to the dashing Barstool Sports fan and One Bite Review guest Henry Golding.
--

191) Prisoners (89/100) - HBO: Jake Gyllenhaal in the lead role, Denis Villeneuve directing, and GREATEST OF ALL TIME Roger Deakins handling the cinematography? 'Prisoners' packs together so many of my favorite things from movies in general and is a great way to familiarize yourself with Villeneuve's work as 'Dune' sets to release in December. A gripping "whodunnit?" thriller, 'Prisoners' will take you on a dark, emotional journey. While I don't think it is Villeneuve's best work, it's a great example as to how insanely talented he is and why he has pumped out so many ('Sicario', 'Blade Runner 2049', 'Arrival') awesome movies.
--

207) Ex-Machina (89/100) - Netflix: Quietly one of 2015's best movies, 'Ex-Machina' was one of the first A24 movies to really make some significant noise. The movie's rugged yet futuristic vibe is so unique and helps deliver a really beautiful story both on the screen visually and through its story. Alicia Vikander's performance in 'Ex-Machina' is often over-looked, while Oscar Isaac and Domhnall Gleeson brought their pre-Star Wars sequels acting chops to a high level. A lot of these "technology is scary!" stories ('Black Mirror') wear thin on me quickly, but this never feels like the case for 'Ex-Machina'.
--

431) It's a Disaster (81/100) - Amazon Prime, Hulu: So, full disclosure, watching this during a pandemic might be a horrendous idea… but I have always found it to be a wildly underrated comedy. It's very subtle and dry, but this time of dark humor is always a great change of pace with the genre. Not perfectly written by any means, the cast filled with David Cross, Julia Stiles, America Ferrera, Erinn Hayes, all still manage to bring something funny to the table and even. Something dark and cruel may be the type of laugh you need right now as we all stay inside.
--

NR) Enron: The Smartest Guys in the Room (95/100) - Rent: You can only rent this movie right now, which is a travesty because it is my favorite documentary of all time. The story of Enron is widely known as being an insane scandal, but the intricate details that factored into its downfall will truly blow your mind if you've never seen this movie. From trading weather to strippers, Arnold Schwarzenegger, dirt bike accidents, fake companies, the eventual destruction of Blockbuster, and much more, this isn't just your average "fact-based" documentary. It's a wild ride with shocking details and, even if you know the whole story, it's worth watching it all play out on screen. With how great 'The Big Short' ended up being, it blows my mind that no one has made a movie about this cast of characters.
--

Let's call it a wrap for this week. Ten more next week, but, for now, have a good weekend and stay safe everyone.