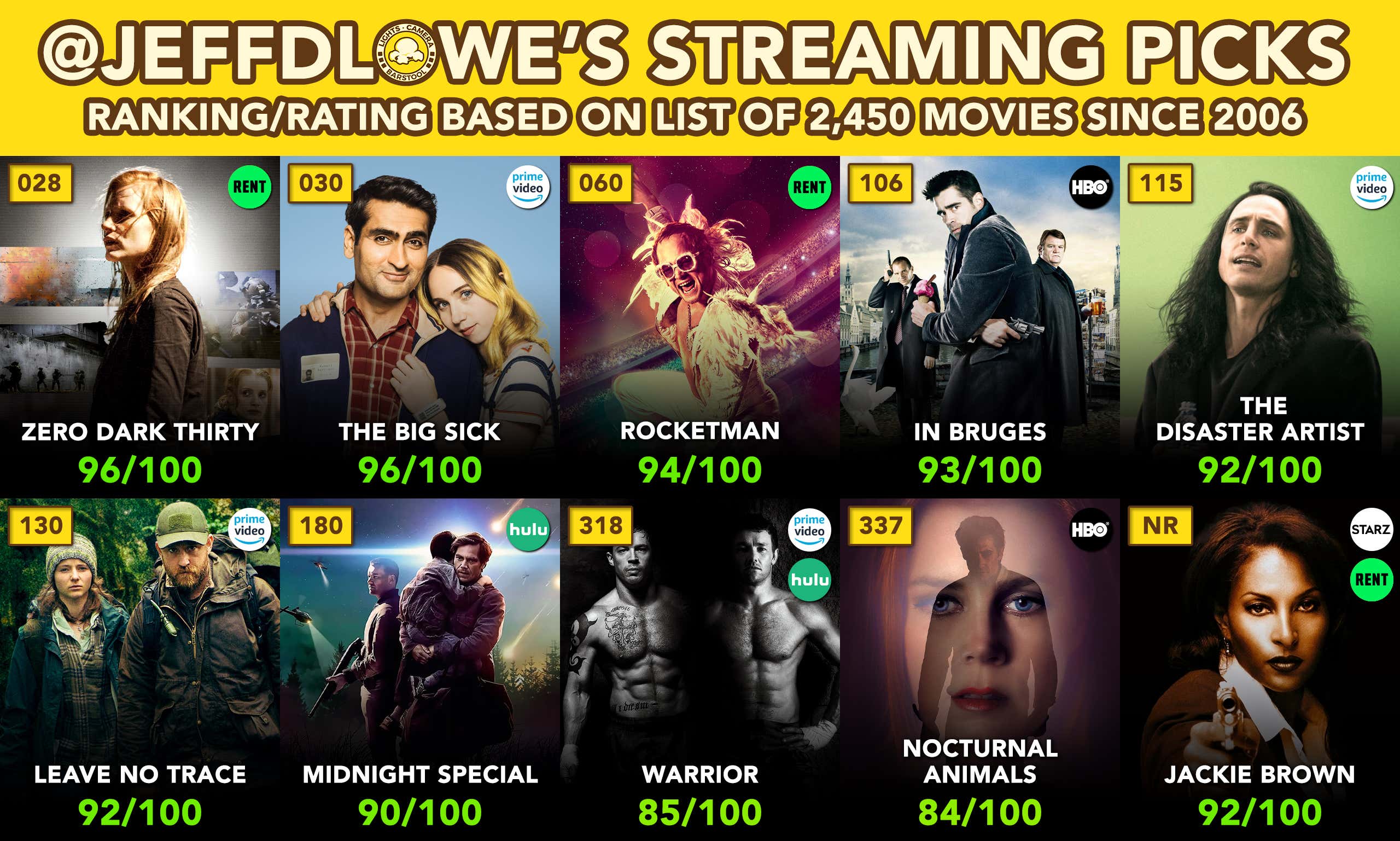 I am back giving out another 10 movie suggestions for you to check out over the course of the next week, months, years, or however long we are in quarantine. We are still quarantined where we are in New York City. But that doesn't matter for movies, because this shit is timeless. Use my suggestions now, throughout the year, or whenever, but, regardless, I hope you enjoy my picks. You can also check out my My Top 50 Movies Since 2006 List, which can be found here.

28) Zero Dark Thirty (96/100) - Rent: A criminally slept on movie, 'Zero Dark Thirty' is a great example of proof that Jessica Chastain might be the best actress in Hollywood. It's strange to me that this movie doesn't get more universal love and praise given its subject. I thought they found a way to cover a pretty huge moment in America, and world, history, with great pacing and storytelling. It wasn't corny or over-the-top, it was a raw and gritty look at the events that led to the end of the 10-year manhunt for Osama bin Laden. This is a fantastic movie that should be celebrated more (and also on a streaming platform but, for now, you can rent it).
--

30) The Big Sick (96/100) - Amazon Prime: One of the best comedies of the last 15 years, 'The Big Sick' had good dramedy emotion but also supplied some huge belly laughs. It's still an absolute crime the disrespect that Ray Romano and Holly Hunter received during awards season for this movie. Everyone always brings up the 9/11 joke in this movie, but it was chock-full of so many more hilarious lines and moments. This is also a good time to re-watch the movie as the team behind 'The Big Sick' has their follow-up movie, 'The Lovebirds', dropping on Netflix this month after skipping theaters due to COVID-19.
--

60) Rocketman (94/100) - Rent: This is what I said about 'Rocketman' in my 2019 Movie Rankings series, "The Elton John musical biopic went wire-to-wire, sticking in my Top 10 for the entire year following its early 2019 release. This biggest reason? Taaron Egerton's insane portrayal of Elton John. The legendary singer told Egerton to not play his exact replica but to put his explosive twist on the role. Egerton did just that and won a Golden Globe (and was an Oscars snub) in the process. I was fairly critical of 'Bohemian Rhapsody' last year. It was a good but bland and boring musical biopic that pulled so many punches. The unique hybrid of a fantasy style to its music moments with the usual beats of a biopic resulted in a genre-bending movie that I couldn't get enough of as a viewer."

The "Crocodile Rock" scene in this movie gives me goosebumps every single time.
--

106) In Bruges (93/100) - HBO Go: This movie always finds its way on and off streaming platforms every month. It left Netflix a while back and is finally back on a platform over at HBO. Martin McDonagh cooks up an incredibly dark comedy with 'In Bruges' and I would suggest it to anyone who likes a good laugh from that subgenre. It's a really intense movie with characters fleshed out in an up-close and personal way thanks to great performances from a bunch of Wizarding World alums in Colin Farrell, Brendan Gleeson, and Ralph Fiennes. The writing in this movie is fantastic and there are a handful of great setups and payoffs that make this a must-watch if you haven't seen it.
--

115) The Disaster Artist (92/100) - Amazon Prime: Let the comedy train continue with the Tommy Wiseau 'The Room' movie. Before watching 'The Disaster Artist', I'd suggest watching 'The Room' first. It used to be free on YouTube, but that doesn't seem to be the case anymore. This movie was fucking hilarious and so well done, but it quickly fell off the map following allegations against James Franco. He won a Golden Globe for the performance and the entire cast, from the way it was acted down to the cameos and appearances, crushed this movie. Setting aside all of the news and drama that surrounded this movie, it's just flat out funny as shit and a great source for a day brightener and good laugh.
--

130) Leave No Trace (92/100) - Amazon Prime: I feel as though there isn't much more to say other than the fact this is a Ben Foster movie. One of Hollywood's most underrated actors teamed-up with up-and-comer (recently in 'Jojo Rabbit') Thomasin McKenzie for one of 2018's most overlooked movies. Holding a 100% rating on Rotten Tomatoes, ‘Leave No Trace’ is a powerful experience as it dives into the turmoil and struggles faced by a father and daughter duo who have lived off the grid before their lives are thrown a curveball.
--

180) Midnight Special (90/100) - Hulu: I loved this movie and I have no fucking idea if anyone even saw it. The cast alone should be enough to turn heads and have you checking it out: Michael Shannon, Joel Edgerton, Kirsten Dunst, Adam Driver, and Sam Shepard. It's a very deep sci-fi thriller that is packed with mystery after mystery does a really great job at keeping you not only invested but guessing as to how the movie will end. I'd say that everything about this movie, from its story to the way it wraps up is pretty damn bold, so it may turn people off throughout. But if you want a tense and different experience, I'd check out 'Midnight Special' on Hulu.
--

318) Warrior (85/100) - Amazon Prime and Hulu: With UFC hitting the airwaves again tonight, I figured now would be a great time to toss 'Warrior' on my list. Joel Edgerton, Tom Hardy, and Nick Nolte is a pretty awesome trio and what you get is a rarity: a good post-2010 sports movie. There is something about this movie that makes it feel so real, raw, and authentic. With sports movies, you always want to get the sense that the filmmaker "gets" the sport and what is playing out on screen. That's very much the case with 'Warrior'. It shouldn't be too surprising though as the man responsible for movies such as 'Miracle' and the Ben Affleck basketball movie 'The Way Back' was behind the lens for 'Warrior'. Also, I honestly thought this was a true story, but I couldn't be more wrong!
--

337) Nocturnal Animals (84/100) - HBO Go: I've slowly liked this movie (which did get some awards-season love) more and more over time and have come to appreciate what writer-director Tom Ford did with it. Don't get me wrong, this shit is definitely a little bizarre and very scatter-shot in some parts. It's a hair messy and very much not perfect, but it does way more than enough to grasp your full attention for the length of the runtime. 'Nocturnal Animals' looks great and really pops off the screen. It also helps that they assembled a murderer's row of actors and actresses for this movie, including Jake Gyllenhaal, Amy Adams, Michael Shannon, Aaron Taylor-Johnson, and Isla Fisher. I feel as though some people may watch this and immediately tell me I gave them a wrong pick, but others would want to go back and watch it all over again. The movie is definitely "out there," but I think that's fun and is what makes movies so great. Take a chance!
--

NR) Jackie Brown (92/100) - Starz or Rent: The other day I tweeted this out about Quentin Tarantino movies:

My list does not include 'Jackie Brown', as it sits at #6 for me, but I did see a lot of folks tweeting about the movie in my replies. Most have either not seen the movie, or just have it all the way up in their Top 5. Even though this is the only movie from Tarantino adapted from someone else's work (1992 book called 'Rum Punch') the script and dialogue in the movie have his stamp over all them. Add that to an insane cast of Pam Grier, Samuel L. Jackson, Robert Forster, Bridget Fonda, Michael Keaton, and Robert De Niro, and you have a fucking awesome Tarantino movie. I think this movie continues to age better-and-better in terms fo audience likeability over the years. It's always been a favorite of mine and if you haven't seen it I highly suggest renting it or flipping over to Starz if you're a subscriber.

I'll have ten more movies next week. Have a good weekend and stay safe everyone.