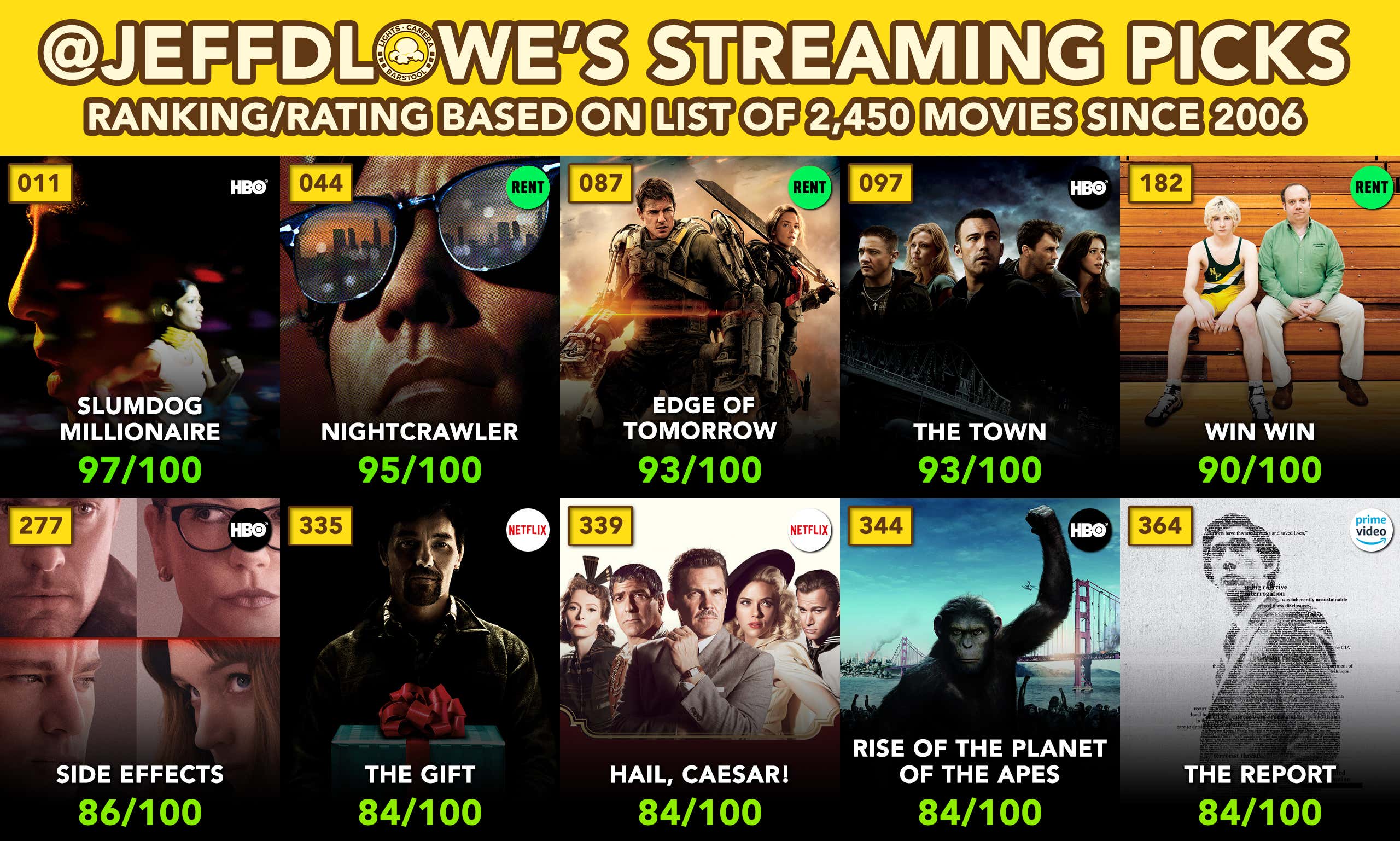 We have a good lot of movies today, but I did break my rules a little bit by including three movies you'll have to rent. Honestly, renting movies on YouTube is a great deal, they're always rather cheap, in the $3 to $5 range. Unfortunately, so many good movies are nowhere to be found on streaming platforms, so renting is your only option. Hopefully, you enjoy these picks and if you don't? Uh, sorry, I guess? You can also check out my My Top 50 Movies Since 2006 List, which can be found here.

11) Slumdog Millionaire (97/100) - HBO Go: When it comes to Oscars-buzz killing a movie for people due to hype, 'Slumdog Millionaire' has to be at the top of the list. I'm not saying people dislike this movie, but I think it has always taken unfair heat because it won Best Picture at the Oscars and then people went and saw it. For me, this is one of my favorite movies of all-time. It's an amazing story in terms fo structure, how it flows, and looks fantastic. On top of it all, the movie has one of the best original soundtracks you'll find anywhere thanks to A.R. Rahman.
--

44) Nightcrawler (95/100) - Rent: This is what I said about the movie in my Top 50 blog:"Jake Gyllenhaal in 'Nightcrawler' is severely underappreciated and it's a crime that he wasn't nominated for Best Actor with this movie. You won't find a creepier performance for a character that you are almost tricked into rooting for at times. 'Nightcrawler' is a twisted movie with some dark and eerie turns that will have you gripping your seat." It's a shame you can only rent this movie, but that shouldn't stop you from watching it as soon as humanly possible if you have never seen it.
--

87) Edge of Tomorrow (93/100) - Rent: A movie that desperately needs a sequel, 'The Edge of Tomorrow' is right up there with the best of the best in terms of action-sci fi releases. With its multiple titles ('The Edge of Tomorrow: Live Die Repeat' or 'Live Die Repeat', I'll never understand why it has so many titles), the movie was a huge surprise when it released in 2014 and shows that when you have Tom Cruise and action, it's hard to go wrong. This also might be my favorite Emily Blunt role, as well, and her return for a sequel would also be great news to hear. I'd probably say this is the most fun you'll have with any movie on my list of 10 movies this week, so definitely pony up and rent it if you've never experienced this sci-fi version of 'Groundhog Day'.
--

97) The Town (93/100) - HBO Go: We just watched this for a Live Movie Night recently and I was once again reminded as to fantastic of a job Ben Affleck did with directing this movie. The familial elements in 'The Town' make it feel really personal, there's no struggle connecting to the characters as their life of crimes plays out on screen. All of the emotion is very impactful to take in as a view and it builds up to a perfect point of chaos and insanity when it all comes to a head in the fucking final, tense action scene. With the exception of the 2016 movie 'Live By Night', Affleck has had a fantastic career as a director.
--

182) Win Win (90/100) - Rent: Probably the most unheralded movie on this list, you won't be surprised that 'Win Win' is a great movie when I tell you that 'Spotlight' director Tom McCarthy is behind the making of it. McCarthy's career has been beyond solid, making excellent smaller movies such as 'The Station Agent' and 'The Visitor', writing the Pixar classic 'Up', and behind one of the main minds behind '13 Reasons Why', not to mention his Oscars success for the aforementioned 'Spotlight'. Led by a strong lead performance from Paul Giamatti, 'Win Win' is a hilarious dramedy and a flat-out enjoyable movie, as McCarthy proves again he has such a great knack for fleshing his characters out so well on screen. You do have to rent 'Win Win', but if you're looking for a more under-the-radar pick, this is your movie.
--

277) Side Effects (86/100) - HBO Go: I am a sucker for Steven Soderbergh movies, which shouldn't be a complete surprise considering 'Ocean's Eleven' is my favorite movie of all time. While he doesn't have a perfect filmography, he usually swings for the fence with creative and clever stories, typically packed with twists and turns that will keep you hooked. 'Side Effects' is a movie you should add to the list of Soderbergh movies worth a watch, a list that includes strong contenders such as 'Logan Lucky', 'Traffic', 'The Informant!', 'Magic Mike', and 'Unsane'. A great cast of Jude Law, Rooney Mara, Catherine Zeta-Jones, Channing Tatum, and Ann Dowd help prop up a really solid script from the writer-director. It's a movie packed with a ton of mystery and right now, for me at least as I sit here quarantined, the more of a puzzle I have to do with entertainment, the more interested I am in watching it.
--

335) The Gift (84/100) - Netflix: Never judge a movie by its trailer! When I saw the trailer for 'The Gift', I essentially laughed and figured this would be one of the worst movies of the year it was released back in 2015. It was not. In his directorial debut, Joel Edgerton, who also stars in the movie, made a fucking killer mystery-suspense-thriller. Also starring Jason Bateman and Rebecca Hall, 'The Gift' will keep you on your toes and likely won't allow you to figure out all of the twists and turns until the very end. It isn't 'Uncut Gems' level of anxiety, but this movie is what I qualify as an "experience" and a damn good one at that.
--

339) Hail, Caesar! (84/100) - Netflix: Let's toss a big "NOT FOR EVERYONE" disclaimer on 'Hail, Caesar!', but I felt as though I needed to share some words on this movie. Some people love it, some people fucking despise it. That's what you get from time-to-time with the Coen Brothers, a divisive, well-written movie that you have to admit knows what it is, regardless if you like it or not. Critics love 'Hail, Caesar!' and audiences hate it, it's been a pretty clear line in the sand ever since it was released. For me, I love movies about Hollywood, but it even took some time for me to warm up to what the Coen Brothers did here. While the story has its moments of feeling a bit off and not exactly tightly wound, the cast of Josh Brolin, George Clooney, Channing Tatum, Tilda Swinton, takes the cake for me. When it comes to movies with Josh Brolin, it's hard for me to truly dislike them. 'Hail, Caesar!' is well-acted and well-written, but whether or not you like it is totally up in there, it has a distinct style and tone that may not work for everyone, but if it does, you'll enjoy it.
--

344) Rise of the Planet of the Apes (84/100) - HBO Go: While the first movie in the Planet of the Apes reboot trilogy is a good one, this suggestion is more for the entire franchise as a whole. Lost between the chaos and the Cinematic Universe era of movies has been the fact that the newer Planet of the Apes movies were all fantastic. Speaking of Caeser, these movies tell the story of the ape Caeser as the world slowly begins to crumble under a pandemic (timely!). Led by Andy Serkis in the lead role in a motion-capture performance for the ages (someone give this guy a fucking Oscar, he is the GOAT), 'Rise' is probably the worst of the trilogy but still an excellent watch. It's the only movie on a streaming platform, so you'll need to rent the rest of the trilogy ('Dawn' and 'War), but the movies get better and better as you work your way through the three-movie story arc. None of the stench from the Tim Burton 'Planet of the Apes' movie remains around this franchise and property anymore.
--

364) The Report (84/100) - Amazon Prime: It felt like Adam Driver was in 1,000 movies in 2019, and this was one of them! Released and hosted exclusively to Amazon Prime Video, 'The Report' tells the story of, "FBI agent Daniel Jones performs an exhaustive investigation into the CIA's use of torture on suspected terrorists. In the aftermath of the 9/11 attacks, the CIA adopted new interrogation techniques." The movie is a political thriller, so if that isn't your cup of tea, this won't be for you, but it is a pretty fascinating look at a different side of one of the darkest times for our country. This is basically an alternate look to 'Zero Dark Thirty' in terms of the events that took place following 9/11. The movie isn't perfect, but it's incredibly solid and, as always, Adam Driver, as well as Annette Bening, turn in great performances.

Until next week with 10 more movies, have a good weekend and stay safe everyone.