I wrote this blog last week. Now, like fucking clockwork...

It's trending on Twitter. People are being fucking annoying, so I figured I'd repost this blog, which shares some thoughts from Robert Downey Jr., Jamie Foxx, and others on this genius movie...

(INTERVIEWS AND CLIPS AFTER THIS TRAILER SECTION I WROTE)

Before I share some words on 'Tropic Thunder', let's rank the fake trailers real quick:

Which brings me to that word: parody. This movie is a perfectly-executed parody of war movies. I wouldn't say it is a perfect movie because that's a strong statement to throw around, but it's one of the best comedies of the last 20 years, and maybe beyond. (You can only rent it right now, I did on YouTube)

It's a movie that is able to accurately spoof and reference things from many, many movies in the genre without stooping to low-hanging fruit or on-the-nose references. Nothing feels cheap about 'Tropic Thunder', all of the jokes are earned and you feel like you're watching a fresh movie despite the fact so much of it is rooted in the past. A good example of the opposite of this would be something like the later-years 'Scary Movie' franchise releases and the spin-off ones from "2 of the 12 writers" of those movies…

I'm sorry if you watched that trailer. It's borderline offensive. That's on me.

Hey, speaking of offensive… let's state the obvious with 'Tropic Thunder': there is no fucking way this movie gets made today. Last night I tweeted about the movie and half of my replies were just about the fact this wouldn't be a movie released in 2020. I hate taking that stance, I think it's overused and sometimes brought in as a defense for comedy that is actually pretty bad. But it goes without saying that the movie would go through a much different release and reception process if it were to come out today. Movies like 'Tropic Thunder' or 'Team America: World Police' would get roasted into oblivion if they were released ten years later. From 'Simple Jack' to Robert Downey Jr.'s Kirk Lazarus, the outrage would be insufferable.

I'll say this: thank goodness this shit came out 10 years ago so we were graced with its genius.

It's actually worth listening to Jamie Foxx discuss Robert Downey Jr.'s character in the movie with Joe Rogan…

(his impersonation of RDJ is incredible, by the way)

The funniest line in the interview is how he didn't even catch that much flack for it and Ben Stiller received most of the heat for the 'Simple Jack' parts of the movie. I mean, shit, RDJ got a Best Supporting Actor nomination for the role!

The whole movie, top to bottom, not just the two jokes I discussed, is a parody. It's there to make fun and be critical of the absurdities you see on screen. As RDJ says, the movie and his character are both a commentary on hypocrisy of artists and Hollywood. Whether that works for you or offends you, is up to you. But nowadays we see less and less of these comedy movies from studios that straight up commit to their scripts and stories regardless of how edgy they might be. Don't get me wrong, there are some, like 'The Death of Stalin'…

…and outside of movies, 'The Book of Mormon' is still going strong…

(If you come to New York City after quarantine, see this show, it's one of the funniest things I've seen in my life… Trey Parker and Matt Stone absolutely crushed it…)

But, for the most part, if you pulled together the best comedies of the last 20 years, the vast, vast majority of them will come from the years 2000 through 2009. It was just a different time period for comedies and studios were willing to take more chances. There are things in movies such as 'Anchorman' or 'The 40-Year-Old Virgin' that might not even fly today without annoying criticism. I'm not going to tell you what to be offended by, or not, and it isn't my place speak on behalf of anyone but myself, but the types of comedies we get these days just simply feel safer than the ones we got in the first ten years of this century.

Stupid? Yes. (unless you find those movies offensive, I guess) The reality? Also yes.

My point? I guess it's just to say that 'Tropic Thunder' remains a great comedy and you should rent it and appreciate the fact Ben Stiller (and co-writer Justin Theroux, I know, always wild to read that in the credits) did something bold with this movie. 'Tropic Thunder' still holds up and should still supply many laughs.

BONUS: This fake Oscars nominees board from the end of the movie is fucking fantastic… 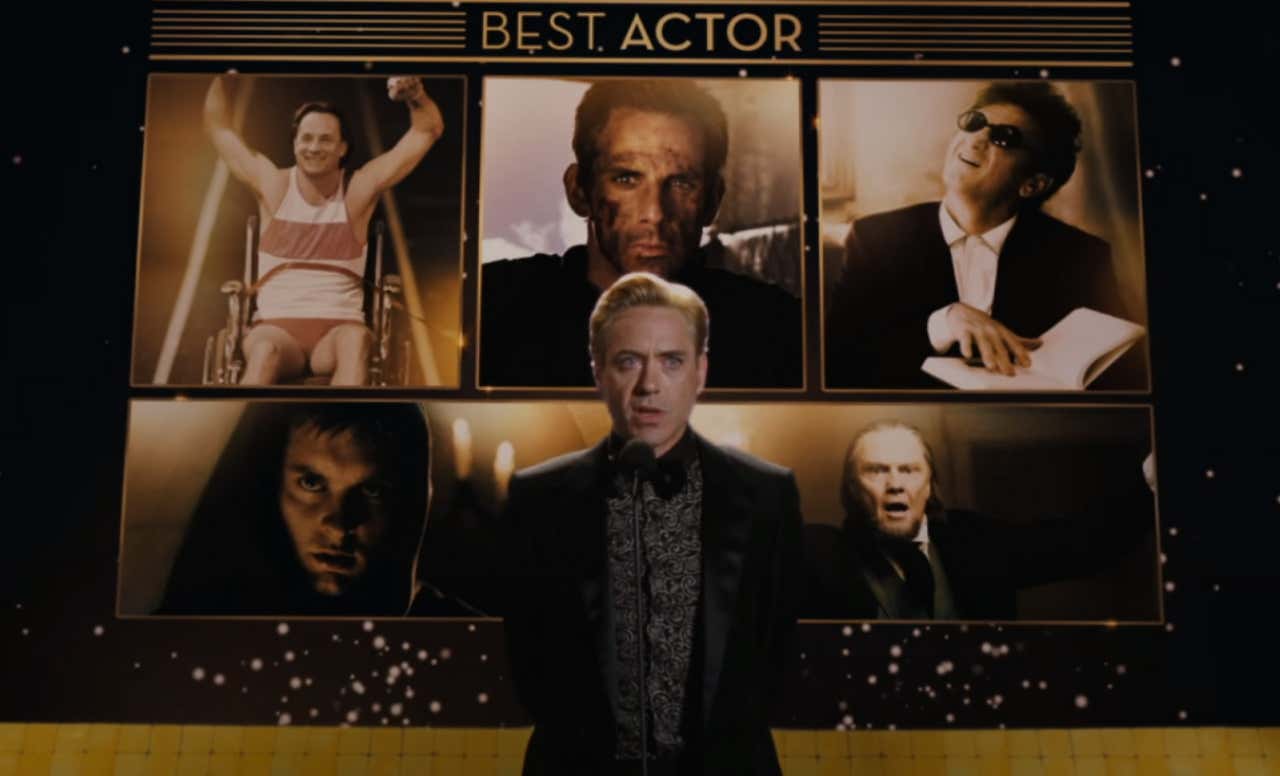