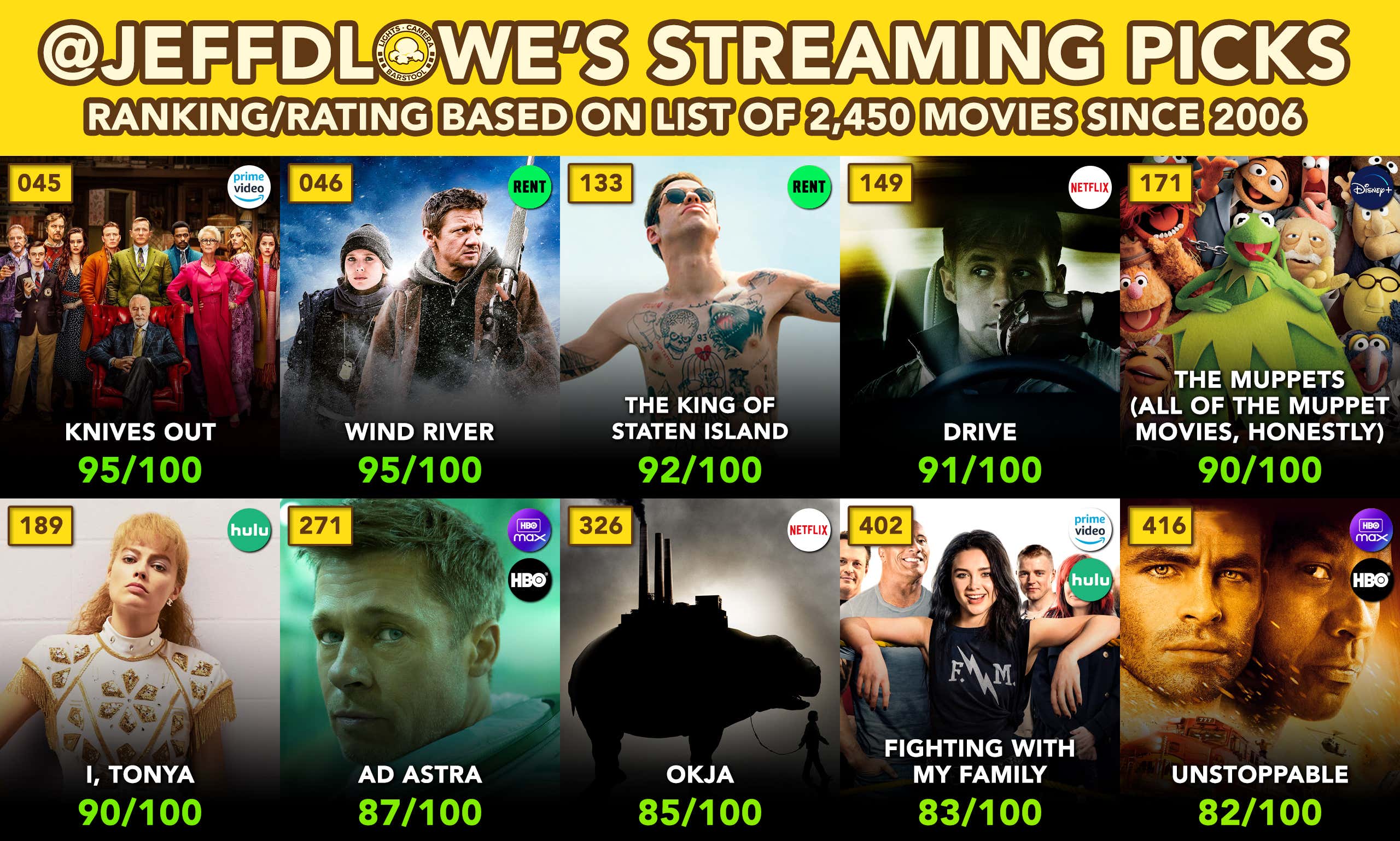 Let me note off that top that everyone is raving about Spike Lee's 'Da 5 Bloods' on Netflix right now, I am watching it today, so it isn't on my list yet, but I will share my thoughts next week. The ten movies today almost all have nothing in common, but there are a few recent releases that finally hit streaming platforms. You can tell that I was feeling in a comedy mood today. As always, you can also check out my My Top 50 Movies Since 2006 List, which can be found here.

45) Knives Out (95/100) - Amazon Prime Video: Finally! Probably the most fun movie of 2019, and one of the best, is on a streaming platform. If you haven't seen it, stop reading this and go watch it now. Here is what I had to say about the movies when I ranked all the 2019 releases: "The fact Rian Johnson was able to not just make this movie work, but make it one of the year's best releases is nothing short of incredible. We've seen recent ensemble casts ('The Murder on the Orient Express') flop hard in recent years and this movie's group seemed almost too good to be true. But my word did Rian Johnson pen a perfect story that played off the personalties and acting chops of all the actors and actresses on board. Daniel Craig and Ana de Armas were the standout performances that gave this movie so much shine. The "Whodunnit?" genre isn't new and is easy to make stale as hell, but Johnson was able to flip the concept on its head to generate a boatload of new ideas, surprises, and twists."
--

46) Wind River (95/100) - Rent: I couldn't wait any longer to throw this on the suggestions list. Taylor Sheridan's big three releases, 'Sicario', 'Hell or High Water', and 'Wind River' are all incredible. This one left streaming services a while back, but it is worth the rent and is very deserving of the "must-see" label. It's tough to top 'Wind River' when it comes to tension and it has finally recently gotten to the proper love it deserves. To avoid spoiling the movie for people who haven't seen it I won't post the "flanking shootout" scene, but if you know… you know.
--

133) The King of Staten Island (92/100) - Rent: This is a new release and one of Apatow's best movies, in my opinion. You can dive into my full review by clicking this link you're reading right here. But, in short, I am a bit surprised critics aren't vibing with the movie as much as the audience. It's a lot like 'Lady Bird' or 'The Big Sick' in terms of the "type" of comedy you're getting and, while it isn't as tight or great as those movies, I absolutely loved it. The structure being a bit chaotic plays into the type of character Pete Davidson plays on screen and the story being told. It worked quite well for me, and I am glad audiences are enjoying an actual good, new movie release for the year 2020.
--

149) Drive (91/100) - Netflix: 'Drive' is such a distinctly unique movie experience that I have always loved, even if I view it through the Ryan Gosling-colored stan glasses I always wear. It's a brutal, fucked up, yet wildly entertaining movie that shows the GosGod has incredible range. Everything about this movie is so striking, from the visuals to the music, it is a neo-noir thriller in a category of its own. 'Drive' is a movie that tosses and turns you for a bat-shit experience right up until the very end, but in all of the best ways possible. One of the most infamous issues with the movie isn't about the movie itself but the damn trailer. I didn't link the trailer above because it completely ruins the experience of 'Drive' if you have never seen the movie. So, instead, I linked the opening 12-minutes of the movies.
--

171) The Muppets (90/100), but also Muppet Movie, Great Muppet Caper, and Muppets Take Manhattan - Disney+: Look, I love the Muppets, sue me! The 2011 reboot-sequel 'The Muppets' was an absolute fucking delight, especially if you like musicals. There is a lot here, starting with great chemistry between Jason Segal, Amy Adams, and the puppets, and going all the way up to the classic dry, subtle adult humor sprinkled in by the Jim Henson creations. It's also not the only great Muppet option on Disney+, as some of my favorites, including 'The Muppet Movie', 'The Great Muppet Caper', and 'The Muppets Take Manhattan' are all available to stream. Again…sue me!
--

189) I, Tonya (90/100) - Hulu: It doesn't matter if the movie is good or bad, Margot Robbie will always turn in a stellar performance, and that's especially the case with 'I, Tonya', considering the fact it is a really good movie. Great sports movies usually transcend the genre and break-the-mold, leaving their peers in the dust. You get that with movies like 'Moneyball' and 'I, Tonya' that find creatives ways to tell their stories. The fourth wall breaking added with great performances from Robbie, Allison Janney (who won an Oscar for the role), Sebastian Stan, and Paul Walter Hauser help make this movie stand out. My big issue with this movie is the fact it doesn't quite bite as hard as it should for a group of people who have some real demons surrounding them with this story. Regardless, it is a pretty damn good movie and, again, when you have Margot Robbie firing on all cylinders, it's hard to look away.
--

271) Ad Astra (87/100) - HBO Max, HBO Go: 'Ad Astra' got swept under the rug a bit, and James Gray movies tend to have folks bored depending on whether or not you like his style. I thought it was pretty damn good, and one of two outstanding Brad Pitt roles from 2019. This is what I had to say about it: "Every shot in 'Ad Astra' is mind-blowing to look at. You could easily argue it is one of the best looking space movies ever made. Where you land on the story-telling will determine how much you like the movie, though. Personally, I think Brad Pitt's calm, subdued character is pivotal in making this movie work, even if at times I felt as though a little more emotion could have been written into the script for him. This movie uses the look, sound, and feel of space to create its tension and boy did it succeed because 'Ad Astra' had me on the absolute edge of my seat."
--

Oh, Bong Joon Ho, you absolute fucking genius. At this point, it isn't a stretch to say that Bong is one of the greatest filmmaking minds of all-time when it comes to both blending genres and telling a story with a message social issues. He never really has an issue with making his point and having it seem too forced. There's a finesse with how Bong makes his movies, and that is very much the case, as per usual, with 'Okja'. While it may not be quite as subtle in its point as you get with 'Snowpiercer' and 'Parasite', this movie will leave an impact on you when the credits roll, all while still delivering fantastic entertainment from the likes of Tilda Swinton, Paul Dano, Steven Yeun, Jake Gyllenhaal, and more. If you are into Bong's movies and haven't seen 'Okja', now is a great time to head over to Netflix and stream it.
--

402) Fighting with My Family (83/100) - Amazon Prime Video, Hulu: This was one of 2019's surprise movies, thanks in part to a deceiving trailer that made it look far cornier and lame than it really was. It was one of a few great roles from the rising-star that is Florence Pugh. Here were my thoughts: "Maybe it was the bit with The Rock in the trailer that felt forced or the fact that recent "feel-good" sports movies have been duds, but I expected absolutely nothing from this movie. Boy was I wrong! This movie has a ton of charm and the backbone of the story feels fresh and fun, even if it falls victim to classic sports movie tropes at times. It's a based-on-a-true-story worth watching and becoming familiar with and one of the more satisfyingly positive movies of 2019."
--

416) Unstoppable (82/100) - HBO Max, HBO Go: Remember 'Unstoppable'? The Denzel Washington and Chris Pine train movie? No? Honestly, I always forget about this movie, but HBO Max had it on launch day and I remembered that this is a really enjoyable movie. Different than the other nine movies on the list, it's just an exciting, fast-paced movie that is good to throw on and turn your brain off for a while with. This isn't the best work from Tony Scott, who has done 'Top Gun', 'True Lies', 'True Romance', and 'Crimson Tide', but it's a fine effort and will satisfy, even if you don't find it to be particularly outstanding.
--
Stay safe everyone, talk to you next week.