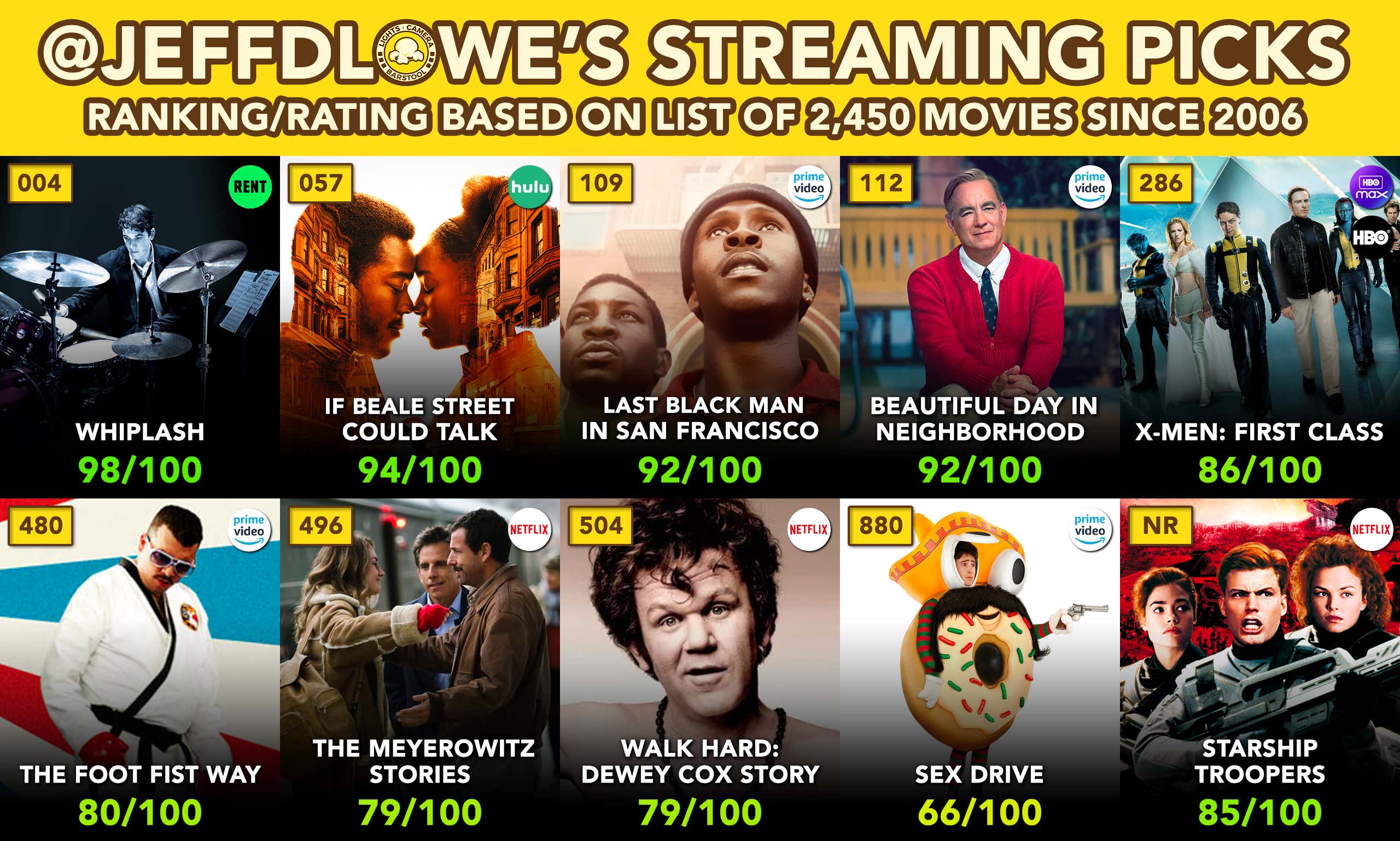 It's the 10th edition of my streaming picks as we (slowly) transition out of quarantine. I'll keep these going as we all return back to work, so here is a fresh batch of ten movies for you to have over the course of the next week. You can tell that I was feeling in a comedy mood today. As always, you can also check out my My Top 50 Movies Since 2006 List, which can be found here.

04) Whiplash (98/100) - Rent: This is simply one of the best movies I've ever seen... period. Damien Chazelle's best movie to date took drumming and music and, somehow, turned it into one of the most intense, white knuckle movies you will ever see. As I said in my Top 50 Movies Since 2006 blog, "Come for the insane drumming and stay for J.K. Simmons' bananas performance as the movie's antagonist. Just remember that he (friend of Barstool podcasts) is a fantastically nice man in real life." It's only available for rent, but there really is never a bad time to watch this movie for the first time or re-watch it for the 100th time.
--

57) If Beale Street Could Talk (94/100) - Hulu: Barry Jenkins, director of ‘Moonlight’, is clearly a master at the art of filmmaking as he hit a home run once again with another stunning movie. The look of the movie, from the framing of each moment, to the set pieces and the color palette, add to a deeply emotional story. It takes on social issues relevant to the present day but also showcases the struggles of dealing with differing beliefs and ideologies within a family. This is a real, raw, and gut-wrenching journey to go on. Aided by some great performances, ‘Beale Street’ does paint a picture of hope rising from the ashes, but also how deep and brutal the origin of those ashes can be.

Here's the thing, I wrote all of those thoughts back in 2018, but the themes and story of 'If Beale Street Could Talk' continue to ring with much relevance with the world we live in today, especially over the course of the last few weeks. It's an important movie and well worth a watch right now. (I still have no idea how it wasn't nominated for Best Picture at the Oscars over schlock like 'Bohemian Rhapsody')
--

112) A Beautiful Day in the Neighborhood (92/100) - Amazon: The Mister Rogers movie from this past year was wildly overlooked in my opinion. 'A Beautiful Day in the Neighborhood' is exactly the type of biopic that sparks my interest and it is thanks in large part to the interesting story angle. Instead of being straight through the eyes of Mister Rogers, or having a "beginning to end" timeline, the slice-of-life style through the eyes of a journalist reporting on him makes the movie feel like something different than we've seen before. Hanks was subdued and fantastic in the lead role but director Marielle Heller, who made the incredible 'Can You Ever Forgive Me?' with Melissa McCarthy, continues to impress me.
--

286) X-Men: First Class (86/100) - HBO Max/HBO Go: I don't like putting MCU or DCEU movies on these lists because everyone has seen them, but I feel compelled to drop a Marvel (non-MCU) movie in here with 'X-Men: First Class'. There are pockets of good X-Men movies, the first being the original movies released in 2000 and 2003, and the second being 'First Class' and 'X-Men: Days of Future Past' from 2011 and 2014. Writer-director Matthew Vaughn just "got it" with the franchise and this movie, he introduced characters with a pretty impressive finesse for a comic book movie, weaving in a great script and emotional backstory to these well-known characters. It also helped that the likes of James McAvoy, Michael Fassbender, and Jennifer Lawrence were all stellar in their franchise debuts. Despite his departure because, as is the usual case (IE: 'Fantastic Four'), the studio didn't listen to him, the next movie, 'Days of Future Past', was really solid. After that? Not so much, and now Disney owns the properties. But the first movie that was supposed to kick off a new trilogy for Vaughn was and still is, really good.

Side note: 'Logan' is a Top 5 comic book movie ever made, so I guess that counts as its own pocket, as well, but everything else ranges mostly from terrible to not good.
--

480) The Foot Fist Way (80/100) - Amazon Prime Video: I actually wrote a blog about 'The Foot Fist Way' back in early April but figured I'd revisit the movie and add it to my streaming lists. This dark-comedy, and Danny McBride's first significant lead role, is really fucked up but endlessly hilarious. There is a moment in 'The Foot Fist Way' that is probably the hardest I've ever laughed watched a tv show or movie. I'd highly recommend watching this if you're looking to dive into a little darker humor. It's a movie I've been in love with ever renting it from Blockbuster back in my high school days.
--

496) The Meyerowitz Stories (79/100) - Netflix: One of the countless Adam Sandler Netflix movies, 'The Meyerowitz Stories (New and Selected)' completely slipped under the radar in 2017. From writer-director Noah Baumbach, who did last year's 'Marriage Story', did something that everyone is always begging for: give Adam Sandler a good vessel to perform in! The cast is great, and further proof of how great Ben Stiller is when involved with good writing, and is a delightful, personal family-based dramedy that more people need to see. It isn't perfect, or without flaws, but 'The Meyerowitz Stories' is one of the better Netflix original movies that has been released.
--

504) Walk Hard: The Dewey Cox Story (79/100) - Netflix: If you listen to our podcast, Lights Camera Barstool, you know that we definitely enjoy 'Walk Hard' more than most people. Especially the Beatles scene…

The usual cast of characters from 2000s comedy movies fill this one up that never really received the praise of other movies Judd Apatow had his hands in. It doesn't quite have the nuance in terms of comedy and parody as 'Tropic Thunder' had, but 'Walk Hard' was pretty fucking hilarious for most parts of the movie. It has grown on me over the years and I really like it more, and more every time I watch it.

880) Sex Drive (66/100) - Amazon Prime Video: Okay, so 'Sex Drive' isn't that great, but it definitely has its moments, especially from Seth Green, who plays a great satirical Amish character. Another Blockbuster rental back when I was in high school, 'Sex Drive' has more than enough moments to lift above the stink of reviews that were tossed at this movie when it came out. Sometimes a cheap laugh is needed, and with some actual good writing and humor thrown in, I ask everyone to give 'Sex Drive' another chance!
--

NR) Starship Troopers (85/100) - Netflix: It is, plain and simple, one of the best satires ever made. The sentiment around this movie has changed so much since its release and while it does carry the cult-like status, I think it is just a flat-out really good movie. What used to be a light-watch on a premium cable channel has become a movie I'll throw on every now and then. It's a hell of a good time, bat-shit crazy, and a fucking awesome movie. I am thrilled it is on Netflix and anyone who hasn't experience 'Starship Troopers' needs to do so as soon as possible.

--
Stay safe everyone, talk to you next week.