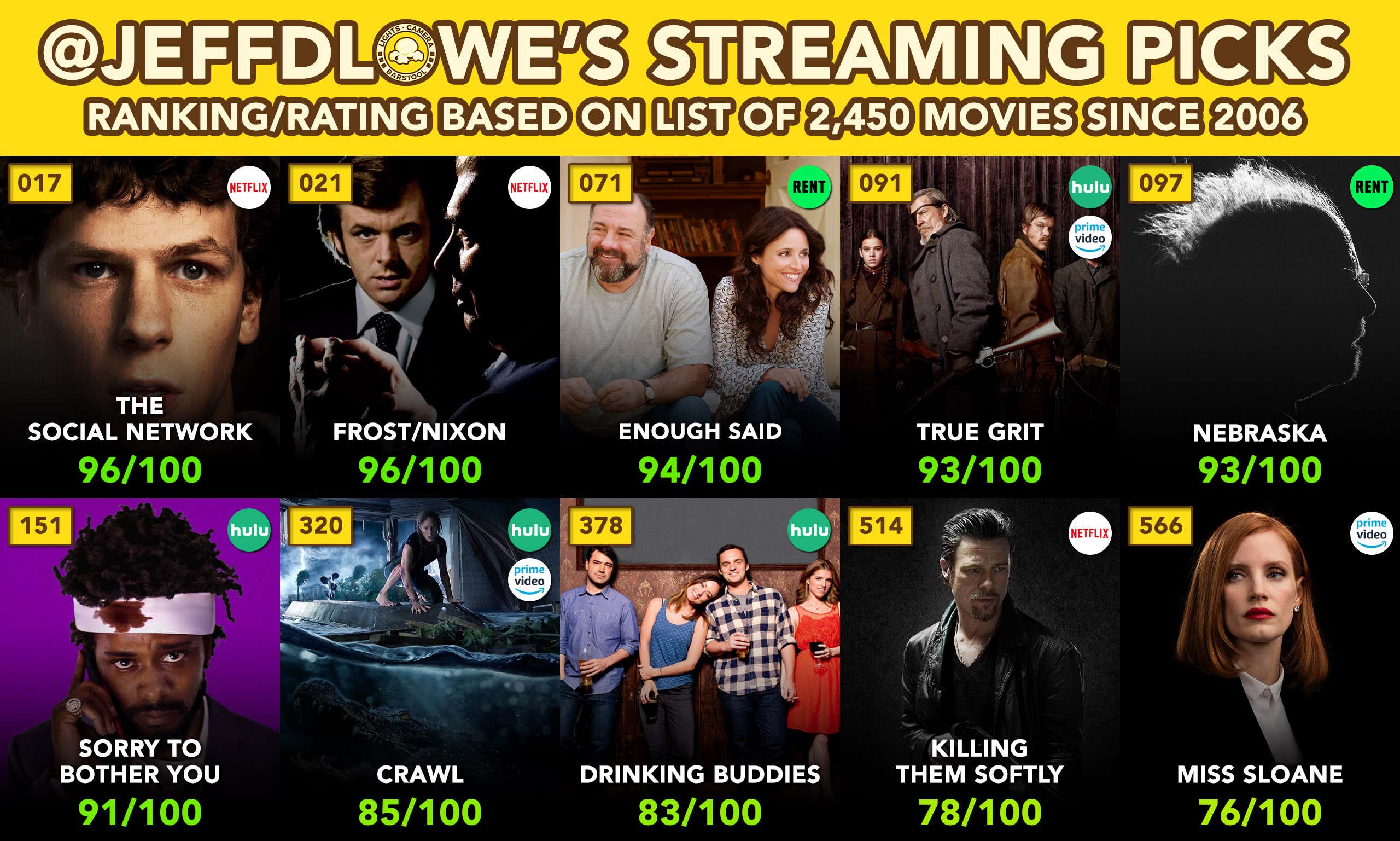 We are back, and I actually cut some corners a little bit here this week with a repeat movie… BUT LET ME EXPLAIN! I put 'Frost/Nixon' on my list a few weeks back, but it was only available for rent. Now? Yeah, it's on Netflix, so I had to toss it on the list. Everything else is a new addition, and I might even toss a few on this weekend. You can tell that I was feeling in a comedy mood today. As always, you can also check out my My Top 50 Movies Since 2006 List, which can be found here.

17) The Social Network (96/100) - Netflix: I have seen people go as far as to say that this was the best movie of the 2010s, and, while it isn't number one for me, I'd have a hard time arguing against it. 'The Social Network' is a powerhouse team-up behind the scenes, with Aaron Sorkin writing and my favorite director-composer duo of David Fincher and Trent Reznor & Atticus Ross. This movie and story really have no business being as compelling and fantastic as it is, it's a damn story about the invention of a website! But, one amazing Jessie Eisenberg performance later, and we have an absolute classic movie on our hands.
--

21) Frost/Nixon (96/100) - Netflix: Here is what I said about the movie a few weeks ago, "One of my favorite movies that rarely gets talked about, here is what I said when I discussed my Top 50 of the last 15 years: "A damn good political thriller, the fascinating story, and hilarious cast chemistry is likely the result of Ron Howard's best work (outside of 'Arrested Development'). Also, if you're a fan of 'Succession' the movie stars Michael Mcfadayen who plays Tom in the hit HBO show, but you may not recognize him right off the bat in this one."
--

71) Enough Said (94/100) - Rent: This movie was a "must-include" for me with it being the seventh anniversary of the passing of the legendary James Gandolfini. One of the best modern-day romantic comedies, Gandolfini and Julia Louis-Dreyfus have infectious chemistry in this movie. Calling it "charming" would be a disservice to how enjoyable this movie is, but it goes far beyond that for me. While 'The Sopranos' is a great rewatch (always), this is up there with the best moments on-screen for the late Gandolfini.
--

91) True Grit (93/100) - Hulu, Amazon Prime Video: You could let 99% of Hollywood make an adaption of an old book that was already made into a John Wayne and you'd get an absolute flop. Not with the Coen Brothers, though. It also helps when you toss in performances from Jeff Bridges, Matt Damon, Josh Brolin, and an up-and-coming star in Hailee Steinfeld. With the GOAT in Roger Deakins leading the charge with the cinematography for the movie, 'True Grit' looks fucking incredible and, in my opinion, is a better telling of the story than the original movie. This is the Coen Brothers near the top of their craft, without question.
--

97) Nebraska (93/100) - Rent: Alexander Payne has made some amazing movies, but I always feel as though 'Nebraska' flies too much under the radar. Just look at this damn cast, Bruce Dearn, Will Forte, June Squibb, Bob Odenkirk, Stacy Keach and, yes, Devin Ratray, the guy who played Buzz in 'Home Alone' and 'Home Alone 2'. It's a raw story and adventure in every sense of the word. At times it is sad, and also downright hilarious. 'Nebraska', carried by some dynamite performances, is a simple movie, but it truly has a lot to say.
--

151) Sorry To Bother You (91/100) - Hulu: This movie is fucking bananas, let me just say that right off the bat. Boots Riley debuted as a writer-director with a crazy satirical-comedy-sci-fi movie that has layers of social commentary that are laced throughout with perfection. In this day and age with Hollywood, there are too many wink-wink moments with social commentary, but Boots Riley walks a fine line throughout ‘Sorry To Bother You’ and tells a natural, albeit, insane story. It also has a standout performance from Lakeith Stanfield (also in 'Knives Out' recently), who you will surely be seeing much more of over the next few years.
--

320) Crawl (85/100) - Hulu, Amazon Prime Video: This is what I had to say about 'Crawl' at the end of 2019: "I will go as far as to say that 'Crawl' was the biggest surprise movie of the year for me. The tense, claustrophobic feel to the movie is what makes it so damn successful. You never feel safe in this movie as a viewer, it always feels as though some shit is about to go down. The constant edge-of-your-seat pacing of this movie is a fucking delight in comparison to the usual duds in the monster movie genre. 'Crawl' knows what it is, isn't afraid to be bold, and is an absolute must-watch popcorn movie from 2019."
--

378) Drinking Buddies (83/100) - Hulu: Very much a dramedy, and not a straight-up comedy movie, 'Drinking Buddies' is incredibly unique in terms of how it was made. There was essentially no script with this movie, it was powered by improv and resulted in some real, down-to-earth performances from Olivia Wilde, Anna Kendrick, Jake Johnson, and Ron Livingston. I'll say this too: some people fucking hate this movie. It can be a little depressing at times, I know that plays into people's hate, but I also know there are folks who just don't quite get the point of it. Overall, 'Drinking Buddies' is just a nice change-of-pace in terms of dramedy style, and I quite enjoyed it.
--

514) Killing Them Softly (78/100) - Netflix: Okay, what do people think about this movie? Let me know below. I want your take on 'Killing Them Softly'. I quite like it, despite a handful of faults, but that might be because I am a big-time Brad Pitt apologist. Anything Pitt (and Matt Damon) make, I will eat up and give a good amount of credit to. If you haven't seen it, give it a go on Netflix and let me know.
--

566) Miss Sloane (76/100) - Amazon Prime Video: 'Miss Sloane' is the perfect example of a movie that isn't amazing but is blessed with the fact the lead role is played by one of the top actors in Hollywood. Jessica Chastain can make a shit movie watchable, and mediocre movies pretty decent. That's what we get with 'Miss Sloane', there are times where my interest and engagement with the story tapers off, but Chastain is able to lift the movie as a whole to a level where it is beyond watchable, and one some might like quite a bit.
--
Stay safe everyone, see ya next week.