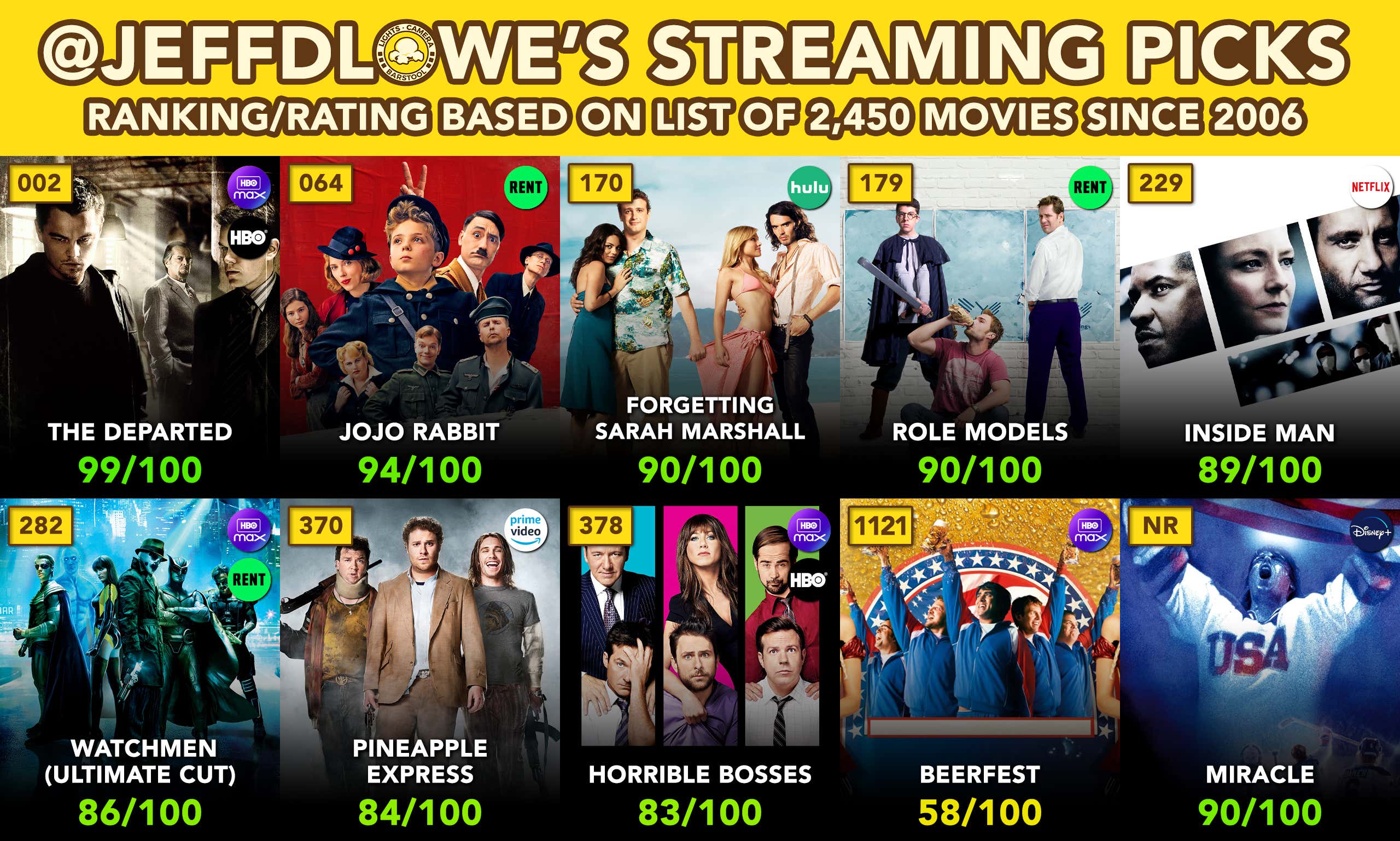 I need to drop this early since July 4th is on a Saturday, so here are my 10 suggestions for the day. I've now dropped around 140 movie suggestions over the last few months. I am running out of movies. Luckily, my rankings list is expanding well back 2,500 movies and the year 2006 soon, so... there is more to come! As always, you can also check out my My Top 50 Movies Since 2006 List, which can be found here.

02) The Departed (99/100) - HBO Max/HBO Go: I said this about 'The Departed' in my Top 50 blog, "I'd have a hard time picking between this and 'Goodfellas' in terms of my top Scorsese movie, but that's a debate for a different time. If you haven't seen 'The Departed' at this point, then what are you even doing!? I think it's also not that big of a stretch to say that this is one of the funniest movies on my list." Just a little update on the 'Goodfellas' debate: I have been backlogging my movie rankings with movies prior to 2006 and I gave 'Goodfellas' a 100/100, so the end of the debate has arrived.
--

64) Jojo Rabbit (94/100) - Rent: This satirical comedy is bold, daring, and further proof that Taika Waititi is one of the brightest minds in Hollywood. Even if the brightest star of creativity in Hollywood is burning out, we will always have Taika Waititi. His willingness to be bold and different makes his movies so unique, the fact that they're also good movies helps too! 'Jojo Rabbit' is no exception, with a ton of heart and emotion mixed into a hilarious script, it effortlessly stands out from the pack. You can only rent it right now, but it is worth the price.
--

170) Forgetting Sarah Marshall (90/100) - Hulu: All of these great 2000s comedies are never on streaming platforms, so it's truly great to see something finally on a service. 'Forgetting Sarah Marshall' is a modern-day classic, with every one delivering a hilarious performance, from the main cast down to the side-roles from the likes of Paul Rudd and Jonah Hill. Apatow always makes movies that have tons of stories and character development involved outside of just the comedic bits and gags and this movie is no different. There's no genre more subjective than comedy, and maybe I hold these movies in higher regard than most, but it's a joy to see it finally available for streaming purposes.
--

179) Role Models (90/100) - Rent: Another one! This is a rental, but I need to add another one of these 2000s comedies to the list. 'Role Models' is always incredibly underrated in my eyes. The Rotten Tomatoes review summary states, "Role Models is a frequently crude, always funny comedy with the cast providing solid work throughout." That stinks! The movie is way more than just that, with some fucking hilarious writing and a cast of amazing side characters that push the movie to great comedic heights. The best side-character? Ken Marino's Jim:

229) Inside Man (89/100) - Netflix: This movie fucking rules and while it might not be Spike Lee's best movie in my eyes, it is easily the most enjoyable. I am a sucker for a good heist movie with suspense, and twists and turns. Denzel Washington, Christopher Plummer, Clive Owen, Jodie Foster, Willem Dafoe, and more, and you've got something fantastic on your hands. It's a gripping movie, and story, and unlike much of Lee's other work. Whenever a great release from an all-time director like Spike Lee is on a streaming platform, in this case Netflix, it's worth clicking play.
--

282) Watchmen (Ultimate Cut) (86/100) - Rent (Theatrical on HBO Max): This is a double-sided suggestion, because 'Watchmen' is available on HBO Max, but it isn't exactly the version I am suggesting. The Ultimate Cut of the graphic novel adaptation from Zack Snyder is only available to rent or buy, but it is the far superior version in my eyes. I am not always a fan of hyping up these Snyder Cuts. Just because something is longer doesn't always mean its better… but that is sort of the case with the Ultimate Cut. After finally reading the graphic novel (which was inspired by the HBO 'Watchmen' series, one of the best pieces of media I have ever seen), I realized that Snyder's full vision is the best form of the movie, even if it is flawed at times. No matter how you watch it, they did a really solid job with the movie, and diving into Watchmen lore is something I can't suggest enough.

(By the way, 'Watchmen' will forever have one of the better trailers ever released)
--

370) Pineapple Express (84/100) - Amazon Prime Video: I never knew this movie didn't receive positive praise until a few years after its release. Maybe I didn't read reviews or didn't realize it, but I always thought this movie was well-received. It's a different pace and style than the other awesome comedies from the decade, and that helps it stand out from the pack. The chemistry between Seth Rogen and James Franco is great (it always is, honestly, no matter the project) and the action actually keeps you on the edge of your seat… which is pretty great for a movie that's mostly a comedy! Even if you don't love the movie, stream it even just for the Bill Hader opening scene. Colin Farrell's character is creepy, different than what he usually plays, and fucked up in a hilarious way, and it's great seeing Jennifer Aniston also depart from her usual roles. I even think the sequel isn't all that bad, albeit not as good as the first movie.
--

378) Horrible Bosses (83/100) - HBO Max/HBO Go: Aside from the fact it stars human garbage piece of shit Kevin Spacey (I'll forever be bothered that we all just moved on from that horrifying Christmas Eve video he dropped), 'Horrible Bosses' is another comedy that I always seemed to enjoy more than both critics and audience. Two big reasons, first off, the chemistry with the lead characters (Sudeikis, Bateman, and Day) is also great in this movie and, secondly, it features an absolutely hilarious performance from Jamie Foxx.
--

1121) Beerfest (58/100) - HBO Max: Yes, this is a bad rating. Sorry. Get your boos out now. Yell at me, it's fine. 'Beerfest' isn't a good movie. It has plenty of funny moments, but let's not pretend the movie is fucking gold or anything. However, it is Independence Day weekend and I felt compelled to add a few movies with some patriotic spirit. Whether the movie is "good" or not is irrelevant to the fact that the movie has had an impact on how our generation drinks in this country. Nobody sees a boot filled with beer and doesn't immediately think of this movie. I appreciate the movie for what it is. So, eat your hot dogs, toss back a couple of cold ones, and toss this on as you celebrate this weekend.
--

NR) Miracle (90/100) - Disney+: One of the better, more inspiring, sports movies you'll ever see. They took some liberties with the behind-the-scenes moments, but fuck that, who cares, this movie will forever give me goosebumps throughout. Disney doesn't make a ton of great live-action movies outside of their major tentpole space, but this was one of them.
--
Stay safe everyone, Happy July Fourth, and see ya next week.