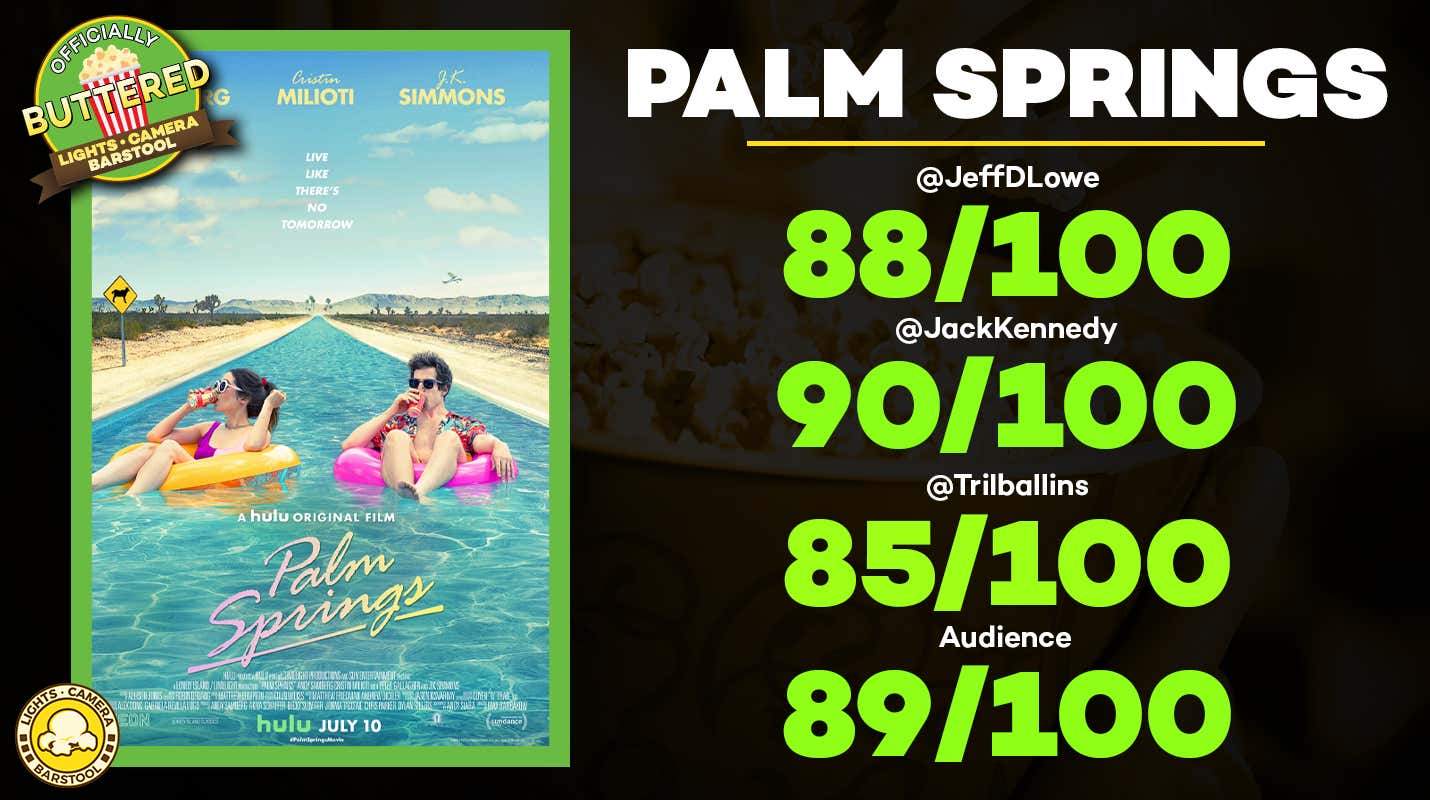 It's a fucking new movie! Why waste time. It's on Hulu, here is what we thought…

Stuck in a time loop, two wedding guests develop a budding romance while living the same day over and over again.

JeffDLowe (88/100): The “stuck-in-a-loop” story tackled by ‘Palm Springs’ isn’t a new one, but, somehow, they were able to inject some exciting new ideas into the Groundhog Day-esque genre. Hulu’s comedy release is one of the funniest movies from the last few years thanks to the bright minds of the Lonely Island crew, Cristin Milioti, and J.K. Simmons.

Ever since ‘Groundhog Day’, we’ve seen plenty of movies take on the formula of living a day, or events, over, and over again. Recently we’ve had movies such as ‘Edge of Tomorrow’ (or ‘Live, Die, Repeat’ depending on where you live or when you saw it) and the ‘Happy Death Day’ franchise. Overall, a bunch of them have been solid, but it has gotten to a point where the concept is possibly getting a little tired.

Luckily, what makes ‘Palm Springs’ an awesome movie is taking a different approach as to how the characters deal with being trapped in a loop.

Usually, the characters in these movies are desperately trying to break the look as soon as possible, but, as seen in the trailer, Andy Samberg and Cristin Milioti’s characters deal with the acceptance of the loop in ‘Palm Springs’. For a comedy, it’s fairly thought-provoking in terms of how you would just “live” and get rid of all the cares in the world if you were stuck in an endless loop. It’s a fantasy, sci-fi, romantic comedy, essentially, and it really does hit on a ton of beats throughout. The cast is strong, the chemistry between Samberg and Milioti is infectious, and a one-on-one scene between Samberg and J.K. Simmons might be the funniest in the year 2020.

While I don’t have many negative things to say, the only trope that felt a little stale was the process in which they woke up to begin each and every loop. How do you make that fresh and different? I am not sure, but it does begin to wear thin and get a little stale after a while. It didn’t necessarily hurt ‘Palm Springs’ all that much for me, but the next movie that tackles this concept should get creative with that side of the endless loop.

What you get with ‘Palm Springs’ is pretty fantastic, but that shouldn't be a surprise when you factor in the Lonely Island crew is involved, a group of entertainers who rarely miss. With a stellar cast and a story that will leave you thinking and theorizing your own endings and ideas of alternate realities and universes, ‘Palm Springs’ is a can’t-miss movie from ‘Hulu’.

KenJac (90/100): Whenever I see the Lonely Island’s name attached to a project, my expectations immediately skyrocket. I’ve followed them since being introduced to them by SNL in the mid-2000s, binging every short they made and buying every album they released. ‘Incredibad’ is actually the last music CD I ever bought. This movie met these unfair expectations and exceeded them in a lot of ways. It’s a charming take on the time-loop genre that is both funny and heartfelt, making it more than worth the 2 clicks on Hulu it takes to watch it.

Andy Samberg is great in this role that is way out of type for him. I’ve seen him as the straight man in a handful of movies, but none of them had any serious dramatic requirements. He was able to hit those notes in this movie while also being funny without the slightly-overboard goofiness you may have come to expect from him. The real star of the show, though, is Cristin Milioti. She takes over as the true lead right around the second act and has some very emotional moments that I didn’t know she had in her. She was also extremely funny. This combo of grounded performances and subtle comedy was extremely refreshing and made this movie what it is. My best friend J.K. Simmons also killed it like he always does. As did the hilarious Connor O’Malley…

The thing that sucks about the time loop sub-genre is that, no matter what,  every movie in it is going to get compared to ‘Groundhog Day’. Doesn’t matter if it’s ‘Happy Death Day’, ‘Edge of Tomorrow’, ‘Source Code’, or whatever, people will always say “Uhhhhhh that’s just Groundhog Day dude!!!!”. It sucks, but that’s the reality of it. I think this movie was unique enough to separate itself from the pack, especially in how the three main characters stuck in the loop all handled the situation completely differently and how the ending of the movie remained ambiguous. On the technical side of things, the movie was gorgeous. The colors match the Southern California landscape perfectly, and some of the shots that director Max Barbakow (in his directorial debut, by the way) got were incredible.

‘Palm Springs’ is an engaging and incredibly likable arthouse comedy that is more than worth your time. It also makes for a great date movie, whether you're quarantined with your significant other or Facetiming while the movie is synced up. Try it out, you won’t regret it.

--
The movie is Officially Buttered as it clears the 69/100 average threshold following the ratings from Trillballins and our audience. We did an in-depth review of the movie on our podcast Lights Camera Barstool, and you can listen to that here.

We will drop our review of the new Netflix movie 'The Old Guard' tomorrow afternoon.