We get really deep into the Fernando Tatis Jr. story today and rightfully so. Obviously it's a shocking and ridiculous situation for so many reasons. The Padres are trying everything in their power to level up with the Dodgers. They've battled all season in a ridiculous division. Juan Soto just landed to help these efforts at the expense of 6 bonafide MLB caliber young talents. Dress it up however and you draw the same conclusion that it's shockingly bad news.

What's unique to me though is Jake's perspective on this story. The pulse of a clubhouse after this stuff drops. The culture of professionalism of training staffs that would instantly recognize the banned substance. Why Tatis would even consider this stuff in the first place. A lot of things that I can speculate about as a fan. But there's limitations and it's certainly helpful we can bridge that gap on the back of Jake's experiences. This is yet another good example.

From there we get into some silver linings about the Tatis suspension, which is a preposterous thing to say right now but just stay with me. I'm not here to just shit on him and go home for lunch. That's obviously the knee jerk reaction for so many cupcake reasons. There's no doubting that Tatis Jr. has done irreparable harm to his brand/status/reputation and all that shit.

But bigger picture there's some benefit to be had for ownership and the front office. Here's how I see it. 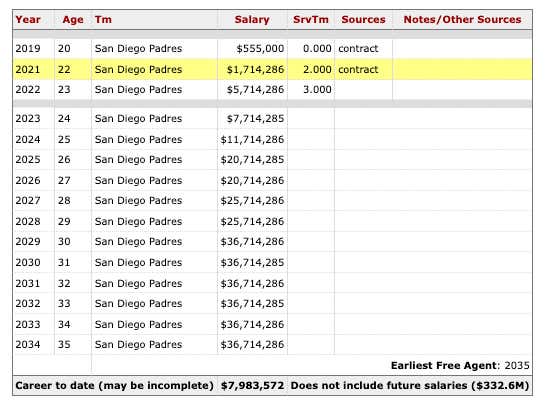 Tatis Jr. has been reported to be a little difficult in the clubhouse at times. He's obviously world class talent but there's room to grow as a leader, teammate and face of the franchise. This is well documented and reported on, especially since the lockout. Get paid a lot, get paid a lot of attention. And most of the attention says Tatis has the potential to be the best player in the world if he wants to be.

Wake up call anyone?

Look at that contract.

About 98% of it remains to be paid out, and you'd imagine ownership and front office and teammates and fans and everyone who cares about the Padres wants Tatis at his best for it. This could be the match that lights the fire in his belly to maximize his amazing amounts of potential. And in the eyes of those invested, better sooner than later. The Padres have made it this far in the season without him and that'll continue until next spring. In the words of Rico Bosco, you can't lose something you never had. The Padres can still compete into October. Although admittedly and obviously - Tatis would certainly help.

Really only one way for Tatis Jr. to move on and that's to come back red hot, which won't happen for a long time. In the interim, sounds like there's an opportunity for him to get better and that's a scary thought for when he comes back.

Until then the Padres face a daunting slate of clubs to win a pennant. Really sucks Tatis Jr. won't be there to help and that's coming from all angles.

Subscribe to Starting 9 for more on this shocking story.

Another Reason To Love Baseball: Charlie Blackmon Didn't Even Play The Field Until His Sen...

Breaking Down The Change-Up: An In-Depth Blog About Baseball's Best Pitch