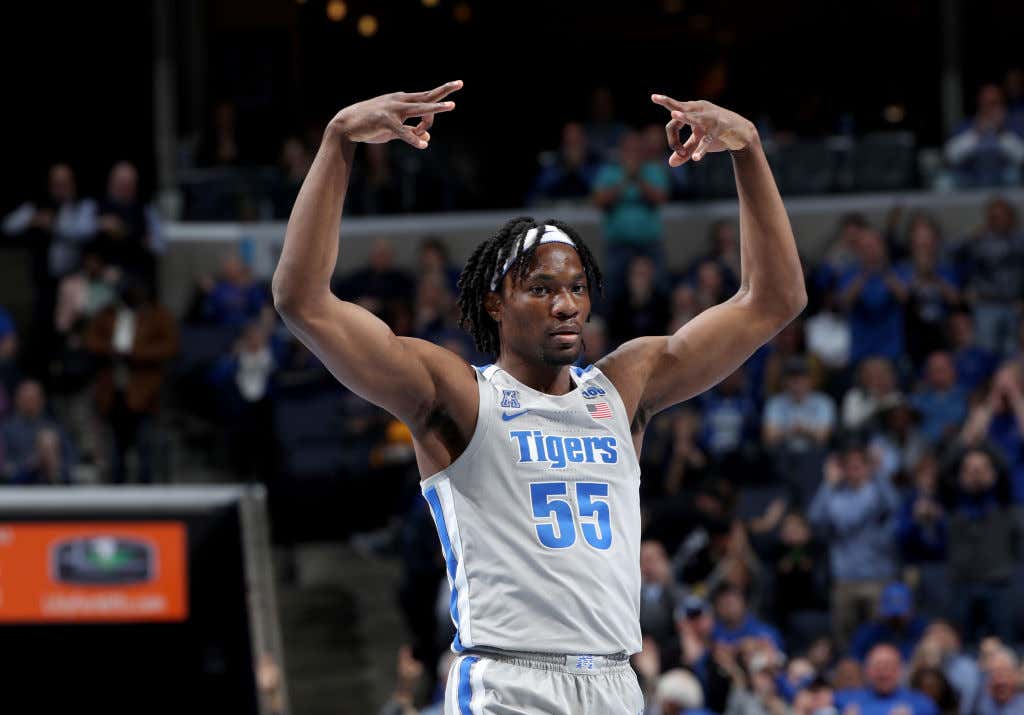 Another day another potential prospect to evaluate through YouTube Highlights. This was another name that I saw multiple times from the stoolies so I figured it had to be someone worth checking out. As a reminder here is a list of previous players we've done so far: Isaac Okoro (Forward), Kofi Cockburn (Center), Tyler Bey (Forward), Nico Nannion (Guard), Aaron Nesmith (Forward), Saddiq Bey (Forward), and Jalen Smith (Forward/Center)

First thing's first. Love the name. I've noticed that during this exercise the better your name is the more I immediately become a fan. Part of this process is trying to visualize Eddie Palladino unleashing his call during games at the Garden, so right off the bat Precious passes that test for me. Were you someone that didn't watch a whole lot of Memphis basketball this season? Me too, so who exactly do we have here. Let's check the stats

From a box score perspective? Sign me up. Numbers that are eerily similar to those of Jalen Smith, someone who I haven't stopped thinking about since we reviewed his tape a few days ago. Mock Drafts have Precious going towards the end of the first round which we know the Celts have two picks (26 and 30) and is also a range we've seen Danny Ainge look at bigs before. So Bryan, this isn't all that crazy of a suggestion from that standpoint.

Based on those videos? Here's what I like. It seems like this is one hell of an athlete which I'm always down to add. For a big, I was pleasantly surprised with how good his handle looks. You get the sense that he's comfortable putting the ball on the floor and attacking the rim which we didn't really see with Jalen Smith, but  he also showed the flashes of being able to dribble in transition which is nice. To me he has the look of a guy that could be your prototypical energy big off the bench which is a type of player I've always wanted the Celts to have. Think of like a young Kenneth Faried or a Montrezl Harrell type player. A guy that comes in and just oozes energy and toughness. Might have his offensively liabilities, but will hit the glass hard and defend his position well. Both of those guys do a lot of P&R offensively and I'm seeing a prospect that seems to know how to finish offensively in that set. We all know Brad loves to run P&R, and while other bigs have the ability to maybe pop out and hit a jumper, there's something to be said about having a guy who can roll hard to the rim and finish strong.

The big question with every potential Celtics big though is can they stretch the floor. Well, Precious didn't really shoot a lot of threes last year (1.3) and projects to shoot just 31% from three at the NBA level. He shot 60% from the line so that's not all that encouraging either. He feels more like your classic defense first/energy guy which definitely has a role in the NBA. Remember, you can always learn to shoot. I don't see much in terms of his passing ability which is important for a big on this team (think Theis/Grant/Timelord) so that's something to note, he just doesn't look like that type of big. I also don't love his 2.8 TOs per game, that feels like a lot for a guy that isn't a primary ball handler.

I think it's pretty unlikely that if the Celts were to keep both of their late first round picks that they go with a big man with both. At that point in the draft it's literally a crapshoot, so ideally I'd just prefer Ainge go with the best big available.

Conclusion: IN….but only if Jalen Smith is not available. If he is, I'd prefer they go a different position with that second late pick.