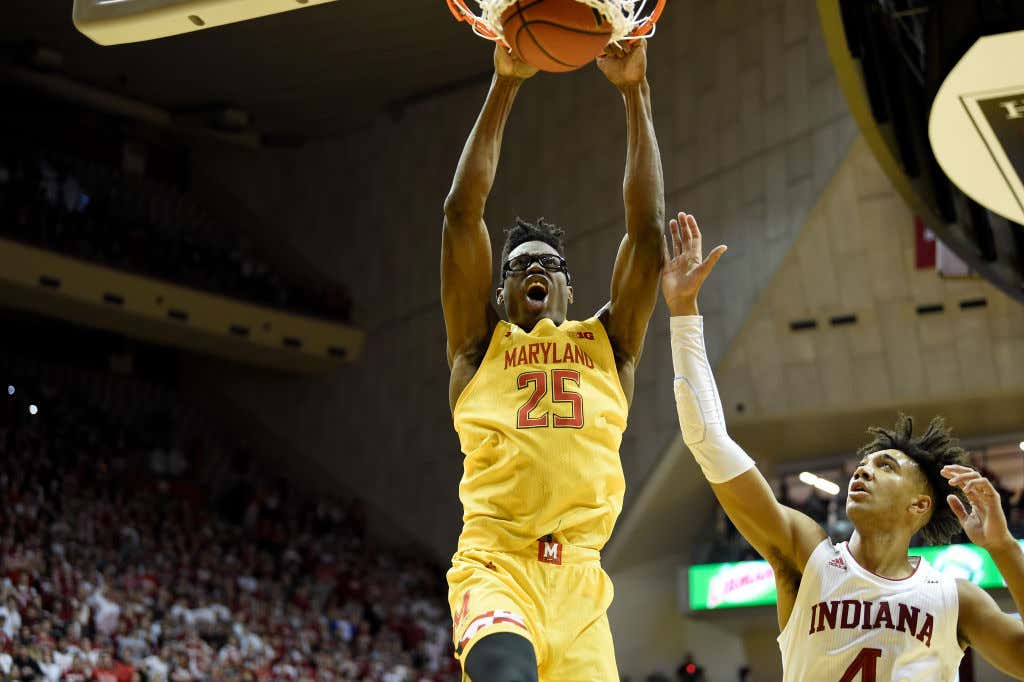 Our search for the next Celtic through nothing but YouTube highlights continues and I have to admit I am excited about this one. A lot of stoolies sent me this name once he declared and I can see why. Before we dive in feel free to catch up on previous prospects if you haven't watched much college basketball this year, remember that's why we're doing this. So far we have Isaac Okoro (Forward), Kofi Cockburn (Center), Tyler Bey (Forward), Nico Nannion (Guard), and Aaron Nesmith (Forward), Saddiq Bey (Forward).

Today's subject? Well it very well may be the big man of the future

Right off the bat I have to address the obvious. I LOVE the goggles look. That's a big time factor in the competition for my heart before we even get to what he can do as a player. I hope this is something he keeps at the next level because I feel like this gives you some additional throwback power. Does my brain think this dude can be some sort of Kareem/James Worthy/Amare/Horace Grant/Kurt Rambis hybrid? Yes, yes it does. That's the power of the goggles to me. So who is this guy? Let's start with the stats

Um, holy shit. A quick mock search tells me that Jalen Smith is projected to go late in the first round, around 27th. That is music to my ears considering the Celtics have both the 26th and the 30th pick in the first round. You then have to factor in Danny Ainge's draft history, the guy loves taking raw big men with a ton of potential in this range. Last year it was Grant at 22, the year before Timelord at 27, in 2016 it was Zizic at 23, Jordan Mickey at 33 in 2015, Sullinger and Fab Melo at 21 and 22 in 2012. Now obviously almost all of those dudes flamed out, but when you're picking that late it's a crap shoot. The point is Danny likes to take a serious look at big men when we get to that point in the draft which tells me that if Jalen Smith is still there at 26 you have to consider him a legit option.

My first takeaway watching those highlights is I love how well this kid seems to move, even at 6'10. That's always the first thing I look at with these big men. Can you run without looking like you have cement feet? For example, remember when we saw Tacko for the first time in Summer League and he looked and ran like a gazelle? That's how I feel here. Shades of Timelord athleticism but better when it comes to running in my opinion. As we know, in today's NBA and more specifically in Brad's system, they are going to lean towards big men who can stretch the floor. It's why they are never in on traditional centers like Clint Capela/Steven Adams etc and why Daniel Theis is so perfect for them. So can this dude shoot? Well, I'll take 36% from three on 2.8 3PA a night. It may not be the strongest part of his game but the fact that he's willing to take them and has a shooting form that looks pretty good for a big man is encouraging. I also love the 75% from the FT line if we're looking for signs to how he could project as an NBA three point shooter.

When it comes to rebounding and rim protection, two areas of need on this roster, I see nothing in those highlights that suggests Smith can't do both at the next level. A nice 18.6% REB% last year paired with an impressive 8.2% BLK%, if you could dream up the perfect mold for a big to put in Brad's system, wouldn't it be someone who could rebound, block shots, make FTs, and stretch the floor? Pretty sure it is. This absolutely looks like a guy they can use in Pick and Pop situations which is really all I want offensively from my big. Did you know he ranked in the 75th percentile as an unguarded catch and shoot player?

Didn't see a lot of post ups which is fine because that shit is pretty much extinct in today's NBA. He definitely needs to fill out his frame but he's 20 years old and once you get him into an NBA program I imagine that would come. I'm very intrigued by his ability as a catch and shoot big man, I think that would be his future on this team. One thing I'm pretty sure he stinks at is passing because there weren't too many highlights around that, he averaged less an 1 assist a game for his career at Maryland and that's something to note. Think of how important Theis/Timelord/Grant are as passers in this offense.

Call me crazy, but I think I've found my #1 option for the Celts if we're talking bigs. That combination of athleticism, shooting, rim protection, goggles, and rebounding have me smitten. So thank you Jay and everyone else who told me to look at these videos.

Conclusion: IN on Jalen Smith to the point where I am ready to riot if he's available and Danny Ainge passes.