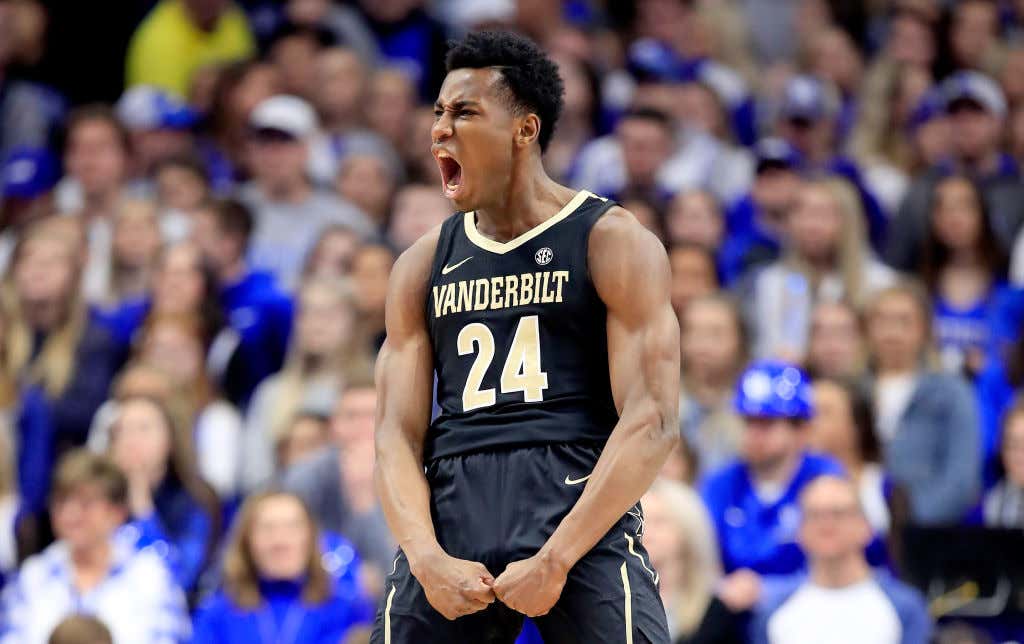 Our quest for finding the next Celtic through nothing but YouTube highlights continues. We've had a good amount of interesting options so far, you can catch up here with some guys we've already done: Isaac Okoro (Forward), Kofi Cockburn (Center), Tyler Bey (Forward), Nico Nannion (Guard)

If you'd like to play along where you give me a name of a prospect to look up and fall in love with through highlights, remember they need to be projected somewhere in the range of where the Celts are going to be picking. That brings us to today's selection

Aight so Joe had a little spelling error here, but we are not shaming during the quarantine so look past that. I love where his head is at so let's dive in.

Hey Joe. If we weren't stuck inside and forbidden to interact with strangers I would buy you a beer for this one. To say I'm in love would be a gigantic understatement. Maybe give a NSFH warning next time or something because my lord. Can someone explain to me why this dude is projected in the late teens and early 20s? There are better shooters than him in college basketball? I refuse to believe that. Great size at 6'6 and a stroke that would make Steph Curry blush. Is that an exaggeration? Maybe, but at the same time in my heart I believe it. Is he falling because of this foot injury I just read about that limited him to just 14 games? I'm willing to look past that if it means the Celts can add this type of shooting depth to their roster. Out of everyone we've seen so far in this exercise I feel like this is the leader in the clubhouse for me when it comes to the Celts 17th pick.

Here's what I know. I know the Celtics need shooting help. Plain and simple. This is a team that was 12th in 3PM and 13th in 3P% this season. Not bad, but not exactly great either. They shot just 36.5% on catch and shoot threes, which was 21st in the NBA. A less than impressive 34.5% on "open" threes which was good for 15th in the league. No matter how you want to slice it, the Celts aren't exactly a team made up of snipers, especially from deep. They have guys that can go on a run like Tatum or Jaylen or Kemba or Smart, but two of those guys are extremely streaky. When you look at just the second unit, it's even worse. That group has basically no shooting in it. So, if you're telling me that with their MEM pick they can potentially snag one of the best shooters in the draft that has good size and can even play a little defense….well where the fuck do I sign?

This is a player that took 8.2 3PA a game last season and made 4.3 3PM. Even if you don't truly want to believe in college 3P% and how that translates to the next level, there has been a ton of research done that you can look at a prospects FT% to help project how he'll do at the next level, and I'd say Nesmith's career 82.5% from the line will do just fine.  What I'm not seeing in these highlights is all that much when it comes to playmaking and defense, but those are things I trust Brad to be able to teach over time. Just look at how much both Jaylen and Jayson have improved in both of those areas during their first few years. Where some of the other prospects we've looked at for a potential wing spot have been more defense oriented, I can't lie, Nesmith's shooting has me under a spell. Only because I've seen this team's second unit go like 9 straight minutes without a made basket. Can't unsee that and if I can add a high upside sharp shooter late in the first round I don't know how you pass that up.

You know how when the second unit plays and there are all those wide open threes for Semi in the corner? Now imagine those same shots coming from a dude that is literally a walking bucket from three. Admit it, you're excited. Me too. In today's NBA when you need as many shooters as possible, I see no reason why this prospect can't be in option. In fact, I would put shooting above the need for a big or a backup point guard. Give me a guy you can plug in right now for 10 minutes a night who can get you some buckets on that second unit as a catch and shoot player.

Conclusion: SO FUCKING IN it will make your head spin