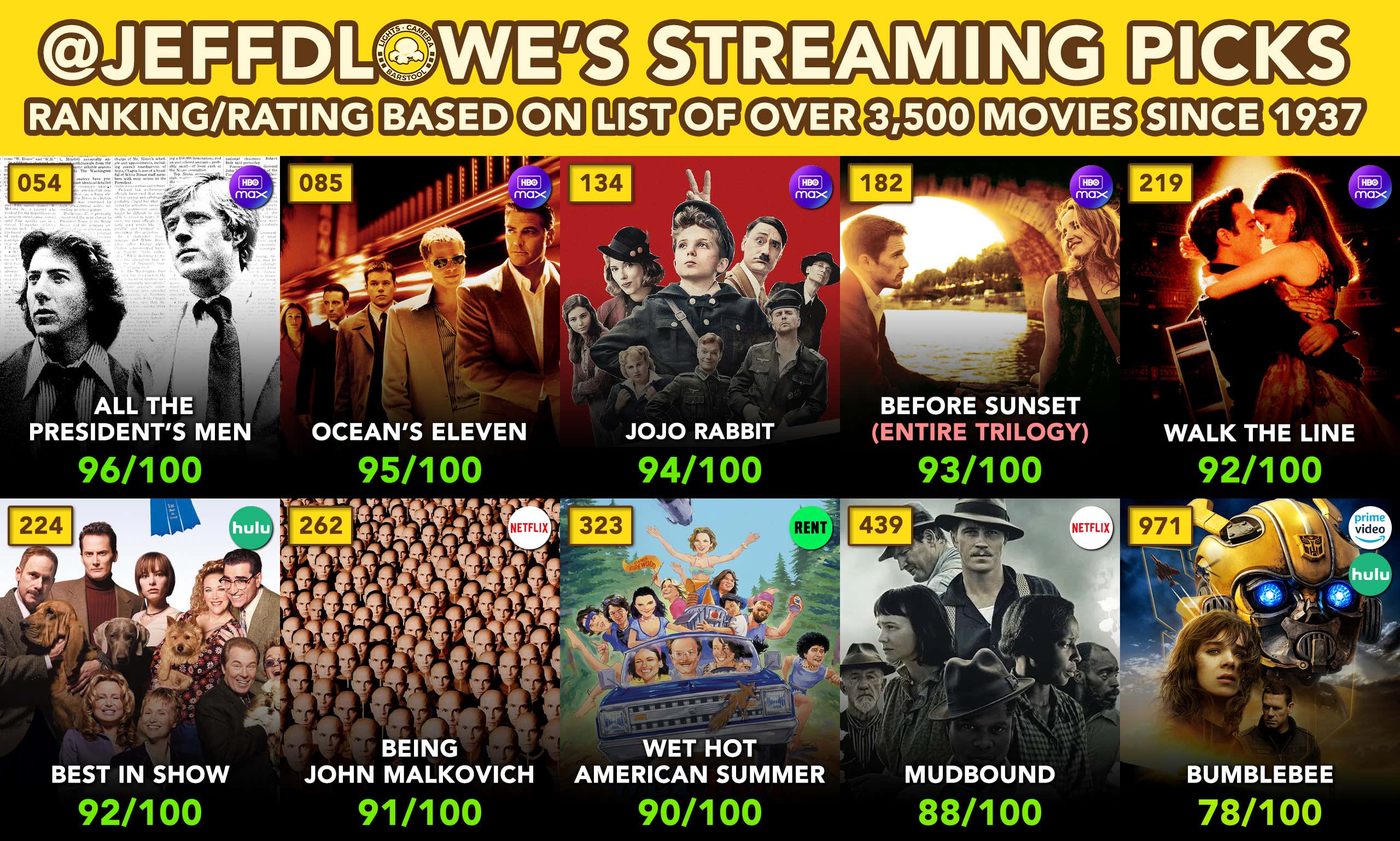 My list now expands past 3,500 movies and to the year 1937: I have been working on (still am) a project to get all of my movie ratings onto a website. Since I have been watching movies my entire life, I decided to go back and backlog movies from years, and years before 2006, when I started logging my ratings. So now my list is expanded, and I can dip into those ratings and rankings for streaming suggestions. The website will be coming soon…

Hopefully within the next week, or two.

54) All the President's Men (96/100) - HBO Max: I'll tell you what, HBO Max continues to pump out some all-time classic movies every few weeks, the platform is seriously flexing its muscles. 'All the President's Men' will forever be the poster movie for how a political, investigative thriller should be. This was only further reinforced for me a few years ago when 'The Post' came out, a movie about similar subject matters (the ending actually lines up a bit with this movie) that didn't really pack a punch. When it comes to these true stories, you truly have to elevate your writing and acting, and not rely on the material being compelling on its own, and 'All the President's Men' does just that.
--

134) Jojo Rabbit (94/100) - HBO Max: I picked this a few weeks ago, but now it is on streaming and not just a rental, so let's run it back. Here's what I had said previously: "This satirical comedy is bold, daring, and further proof that Taika Waititi is one of the brightest minds in Hollywood. Even if the brightest star of creativity in Hollywood is burning out, we will always have Taika Waititi. His willingness to be bold and different makes his movies so unique, the fact that they're also good movies helps too! 'Jojo Rabbit' is no exception, with a ton of heart and emotion mixed into a hilarious script, it effortlessly stands out from the pack."
--

182) Before Sunrise (entire Before Trilogy) (93/100) - HBO Max: The Before Trilogy (Sunrise, Sunset, & Midnight) very well might be Richard Linklater's greatest collective work. Playing out over 20 years and three movies, the trilogy is finally on streaming, and if you can go for some romantic drama, this should be an easy pick for you. Severely underrated and underappreciated, even I, someone who isn't always fond of the romance genre, have to recognize the work done here. The chemistry between Ethan Hawke and Julie Deply is incredibly hard to top.

219) Walk the Line (92/100) - HBO Max: When it comes to music biopics, it's tough to find something better than 'Walk the Line'. Now streaming on HBO Max, with all the talk in recent years about what actors sing their own songs or lip-sync, we can't ever forget the jobs done in this movie by Joaquin Phoenix and Reese Witherspoon. The first time you hear Phoenix sing in the movie is quite shocking. While Philip Seymour Hoffman (rest in peace) was amazing in 'Capote', it will always bother me that Phoenix didn't take home the Oscar for this role.
--

224) Best in Show (92/100) - Hulu: An excellent comedy, with great use of the mockumentary genre, 'Best in Show' is just another one of the strong movies in Christopher Guest's filmography. The improv in the movie is quite fantastic, which is often something that, when gone too far, can derail a movie (EX: 'Ghostbusters' (2016)). Whether it be Fred Willard's amazing one-liners and run-on comments as the dog show announcer, or even Guest himself talking about memorizing all of the names of nuts, there are so many incredible laugh-out-loud moments in this movie. 'Best in Show', a distinct top-tier comedy movie for me, with a stellar cast of some of Hollywood's funniest comedic actors.
--

262) Being John Malkovich (91/100) - Netflix: One absolutely weird-ass movie but in the best way possible. The minds of Spike Jonze and Charlie Kaufman are quite fascinating, but they went for it and hammered home a slam-dunk of originality with 'Being John Malkovich'. It's wild in the psychological sense, but damn funny with all of its comedic elements. The movie gets your brain spinning, but never at the expense of just being a ton of fun. I'll be happy with John Malkovich in almost any movie, but then you give me Malkovich as himself? I'll eat that up every single time.
--

323) Wet Hot American Summer (90/100) - Rent: First of all, why isn't this movie on Netflix? They commissioned a prequel series about this movie, it's crazy you can watch that on Netflix, but not the movie. With that said, if you have never seen 'Wet Hot American Summer', rent it… now. The absolute flex from this movie with its cast will forever be remarkable: David Hyde Pierce, Janeane Garofalo, Michael Showalter, Marguerite Moreau, Paul Rudd, Christopher Meloni, Molly Shannon, Ken Marino, Joe Lo Truglio, Michael Ian Black, Amy Poehler, Bradley Cooper, Elizabeth Banks, Judah Friedlander, H. Jon Benjamin, and more. Do I even need to say anything else? A movie not well-received when first released, 'Wet Hot American Summer' has aged into what is today: a comedy classic.
--

439) Mudbound (88/100) - Netflix: A movie with serious acting muscle, the Netflix Original has always seemed to fly under the radar despite awards season love following its release. Before the time of 'The Irishman', movies such as 'Beast of No Nation' and 'Mudbound' led the way for the Netflix Original Universe. Packed with great performances from Mary J. Blige (Oscar-nominated), Garrett Hedlund, Carey Mulligan, Jason Mitchell, Jason Clarke, Rob Morgan, and Jonathan Banks, 'Mudbound' is an outstanding historical drama that is just sitting there on Netflix.
--

971) Bumblebee (78/100) - Amazon Prime Video/Hulu: I like to end with a pick that might be a touch off the beaten path, so why not dip into the Transformers franchise? The first spin-off movie outside of the Michael Bay Transformers Universe, 'Bumblebee' wasn't great by any means, but it is a fairly entertaining movie. It supplies John Cena with a role that fits him perfectly, and Hailee Steinfeld is just great in whatever movie she stars in. If you need a fun, turn-your-brain-off blockbuster, 'Bumblebee' is a good pick.