You can find selections/criteria from round one here, round two here, round three here and round four here. Today we get to our Final Four games and we are in for a doozy. Let's get it.

11 Dairy Queen vs 10 Cookout. I don’t remember the first time(s) I tried a lot of restaurants but I remember trying both of these vividly. When I was a much younger man a kid, I played t-ball with the best of them. I led the league in OPS+ thrice, WAR twice and who could forget me smoking a double off the wall to clear the bases in the bottom of the ninth of Game 7 of the LLLWS (LITTLE Little League World Series, we were young as shit….like LITTLE little)? After our t-ball games, our Coach would take us to Dairy Queen for a round of blizzards and some fine scotch he brought himself. It was right next to a place that sold tombstones. Nothing beats a blizzard outside with the boys and checking out some of the finest marble headstones this side of the Mississippi while pondering morality as a concept. We were five. It was sick.

The first time I had Cookout was on Georgia Southern’s campus (Go Eagles, and things of that nature). The options alone staggered me. I was building my tray and then I saw I had the ability to opt-out of French fries. Not only can you opt-out of fries, but it’s not for onion rings or some mandarin oranges, no weak shit like that. You can get actual sides, and you get two of them! If you’ve never been to Cookout, this is the selling point. However you feel about fries, would you get them if the options were:

You’d never eat a fry again and it's fine. That’s the kind of experience Cookout opens up to you. And you get a drink with it that you can upgrade to one of the thousands of kinds of milkshakes. I want it on the record that never in my LIFE have I passed up the milkshake when it is available here. And I never will. You have my word. Yet I digress.

I was preparing for my impending meal when a dangerously stoned woman handed me my milkshake out of the window and announced in confidence, “I just put my foot in that fuckin milkshake man”. AND BOY DID SHE!!! It was peach cobbler. I remember it like it was just day four of quarantine yesterday.

Now, the matchup. Dairy Queen has a lot of solid options on the menu, which can be overlooked in the Blizzard hype. They’re a solid team with few flaws and a superstar to take them home like the 2010-11 UConn Huskies. The chicken finger basket is quality, the burgers are fine and I always appreciate a place you can get a solid hot dog. Dogs are underutilized in the fast-food game. And the Blizzard is their Kemba. He lets the first half of the game come to him but takes over when you need him to.

Cookout is 2017-18 Villanova. The star is usually dictated by the night and the matchup. One night it’s the bevy of Shake Options Bridges, the next it’s the Chicken Sandwich DiVencenzo and then it’s Double Nuggets As A Side Brunson. Their strength is in numbers and here they just overwhelm Dairy Queen. Blizzard still got his 28/13 but he had to work for it. The rest of the team didn’t step up when he needed them. Cookout moves on to the Final.

3 Popeyes vs 1 Wendys. No sappy stories here to pump word count. This one is your blueblood program versus a talented team that got hot at the right time. Wendy’s is like the Duke program. Consistently in the mix. Consistently a roster of five and four-star talents that know their role. Every once in awhile they stumble into a superstar like Asiago Ranch Chicken Club Tatum or Baconator Williamson. And every once in awhile, Wendy fucks it up by taking away spicy nuggets for no reason whatsoever or changing the fire BIGGIE lemonade drink logo or by yelling at your Aunt Evelyn and reducing her to tears after a disappointing freshman season.

Popeyes isn’t exactly a new contender, they’ve been around for a while. In the mix at times, a contender at others but never a champion. They’re the Syracuse program that was fine with the status quo but they needed a shot in the arm. So they brought in Carmelo aka Chicken Sandwich. And he changed how the program was seen. Now more jokes about playing zone defense or arid biscuits. The sandwich was legit enough to where you had to take them seriously immediately. The system worked beautifully because every time you overloaded on Melo, there was Three-Piece Mcnamara with a big shot or Five Tenders Box Warrick with a clutch block.

And what a system. It’s hard to call a program like Wendys flustered, but the Chicken Sandwich delivered a crushing blow. No single item Wendys has or has ever had has hit the streets like that. It blew past the Asiago chicken, which wasn’t even being mentioned in the chicken sandwich battles! Every time they get a decent run together, Chicken Sandwich is there to knock down another 17 footer to keep them at bay. They gave it a good effort but Wendys couldn’t cut the lead to single digits at any point in the second half. Popeyes marches to the Finals. 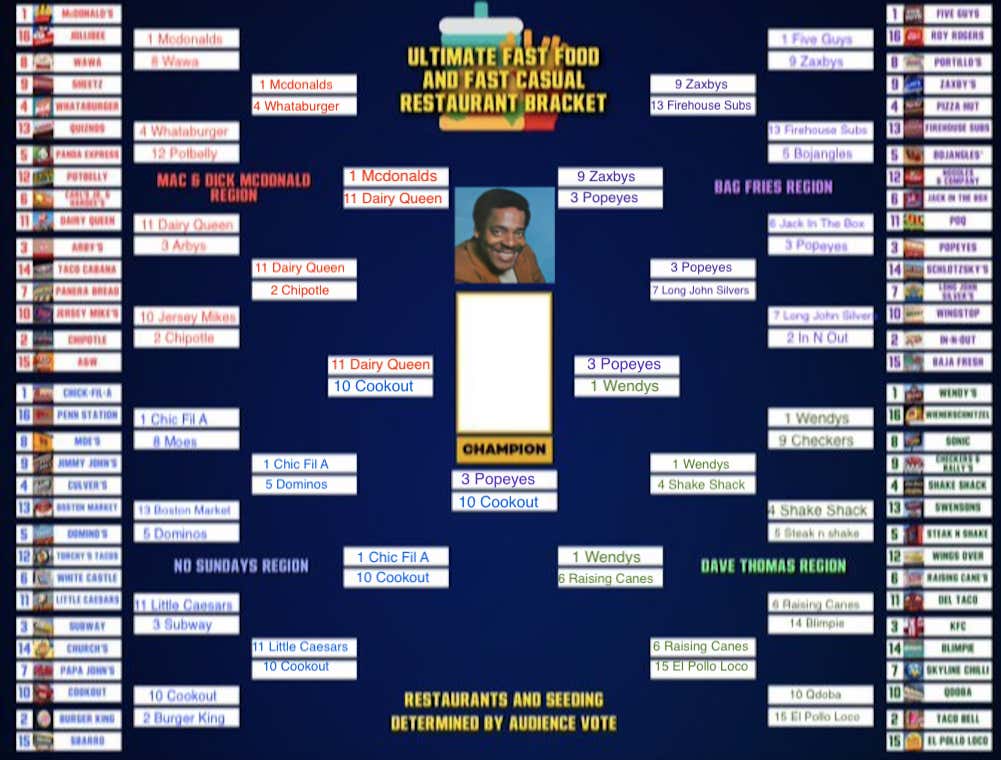