You can find selections/criteria from round one here and round two here. Day 2 was a little smoother as we are close to the nitty-gritty. We get down Elite Eight today and our champion will be crowned soon.

1 Mcdonalds over 4 Whataburger. A great battle that happened far too soon just because of the way the seeding fell. After specialty and range, I go to value for how to rank these establishments. $5 at Mcdonalds will get you plenty. Can’t say the same at Whataburger. I dare Whatburger to prove me wrong!!!

11 Dairy Queen over 2 Chipotle. A blizzard never gave anybody salmonella or whatever disease it is that Chipotle dishes out every eight months or so. With Blizzards keep dropping 25/12 a night, how far can DQ go???? 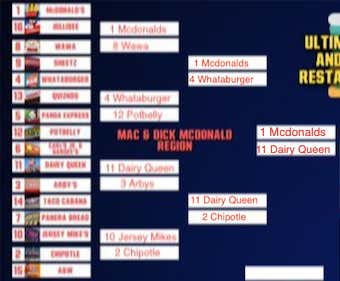 1 Chic Fil A over 5 Dominos. Innovation can only get you so far when you’re going against Chic Fil A and the Princeton offense. Not as much innovation but they don’t really have to because they keep hanging banners.

10 Cookout over 11 Little Caesars. Even I can admit Little Caesar’s probably made it too far and despite making every selection, I have no idea how we got there. Nonetheless, their Cinderella story comes to an end against Cookout. And Jim, I’ve got to tell you: Cookout made it to the Elite Eight without breaking a single sweat. We’ll see if that lack of a good challenger pays dividends later on. 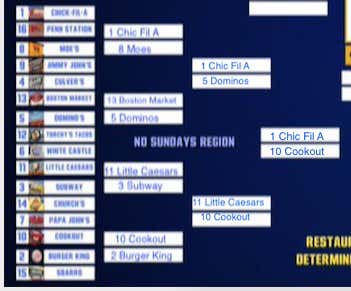 9 Zaxbys over 13 Firehouse Subs. When I was in high school, I worked in between a Zaxbys and a Firehouse Subs. A gallon of bread costs you a nickel. Calvin Coolidge was the President. Anywho, every day I worked hard enough to the point that my tip money was my lunch money while on the clock. Firehouse was for more special occasions (read: I ate there less because it was expensive and I was poor) but Zaxby’s was more nightly eating. I say that because if these two establishments played ten times, I think Firehouse wins three or four of them. It’s a close call but I’ve been apart of more situations where “Let’s get Zaxbys!” comes up than “Let’s get Firehouse!”.

3 Popeyes over 7 Long John Silvers. Long John Silvers run comes to rest, much to the delight of many of you HEATHENS. The Chicken Sandwich is Christian Laettner in the sense that even having it just about guarantees you a 30 win season and a Final Four appearance. There’s only so low you can fall with this sandwich on your side. 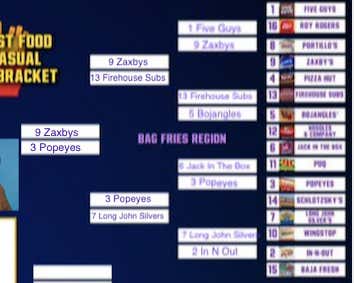 1 Wendys over 4 Shake Shack. We’re almost looking at chalk which is boring, but it feels right. Wendy’s is just too solid. Too many options, too much value, just enough innovation. It has an answer for man-to-man defense and a couple of shooters to bust you out of a zone. It can switch the pick and roll or have the big drop back to contain. Too much range.

6 Raising Canes over 15 El Pollo Loco. You El Pollo Loco naysayers can rest easy. Their run has come to an end. Raising Canes has some room to surprise here because their bread is a sleeper, like a great sixth man. And their sweet tea hits the spot every once in a while, like a couple of walkons who are shooting 46% from 3P in limited minutes. 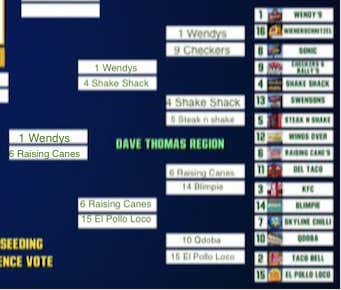 And just like that, our field of 16 is now eight! Join us tomorrow as we jump to the Final Four! Take care, stay home if you can, rest up and wash up. 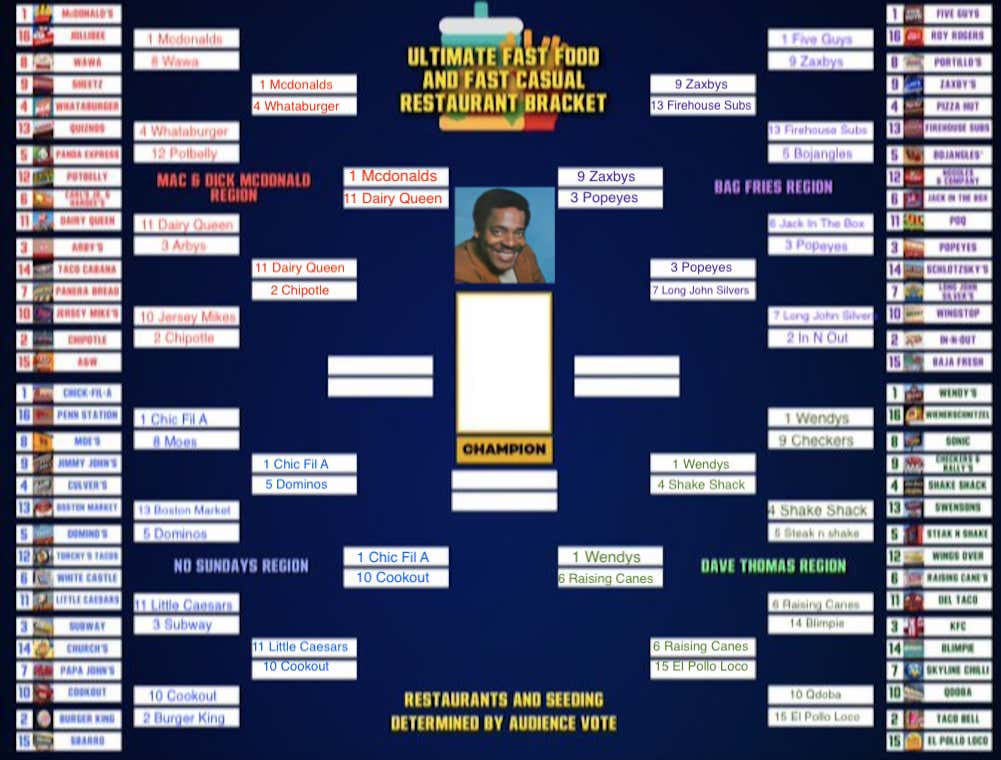