You can find selections/criteria from round one here. I will be adding another item in terms of what I’m looking for.

-Innovation. How bold are you? I’m willing to take your innovation into consideration. Unless it’s KFC and the Double Down, in that case, you can go to hell. The companies that have options or keep innovating are usually the ones that move along.

Day 1 was ripe with disagreements so I figure today will be one where we can all read my selections and agree wholeheartedly!

1 Mcdonalds over 8 Wawa. Wawa was a nice story at 8. They rallied to win their conference tournament and secure just the team’s second bid in school history. Great story and their coach will probably be rewarded with a lucrative move to a bigger establishment. But the buck stops here. Mcdonalds is too big, too strong, too fast, too skilled, too experienced.

4 Whatburger over 12 Potbelly. Potbelly does one thing (sandwiches) well. Whataburger does a lot of things well. They have burgers, they have shakes, they have chicken, they have breakfast. Potbelly just can’t keep up here.

11 Dairy Queen over 3 Arbys. UPSET CITY BABY, WHISKERS IS IN YEAR 17 OF SELF IMPOSED QUARANTINE WITH DREAMS OF A DOUBLE OREO BLIZZARD WHEN HE GETS OUT…….BABY!!!! Dairy Queen is shades of Carmelo Anthony’s Syracuse team. A superstar player with just enough around them to make any matchup uncomfortable. Bye, Arbys.

2 Chipotle over 10 Jersey Mikes. The dangers of being a one-trick pony like a sandwich shop. With Chipotle, you can get your E. coli in a wrap, burrito or a bowl. Variety is key here. 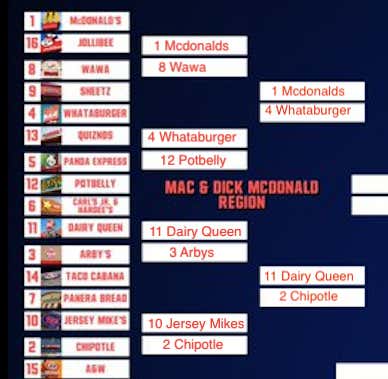 1 Chic Fil A over 8 Moes. Think of Chic Fil A like last year’s Virginia team. Just solid talent all around and too well ran to not bounce back from shameful debacles (Losing to a 16 seed/halting financial support to organizations opposed to gay marriage after PREVIOUSLY financially supporting organizations opposed to gay marriage, etc). Primed to go far.

5 Dominos over 13 Boston Market. I’ll admit this was a close one. Boston Market has the in-house bird roasting card over Dominos. But Dominos gets the nod for innovation. Boston Market is resting on its laurels while Dominos is apparently filling potholes with pizza or whatever the fuck they’re doing this week. And even decent pizza is better than many other genres of food on their own. Dominos advances.

11 Little Caesars over 3 Subway. Yikes, this got out of hands fast and now Little Caesars is in the sweet sixteen? Sure. $5 Hot and ready pizza vs. $5 foot long. Both doughs made of cardboard, there’s no doubt about it. But for $5 would you rather have an entire pizza or an entire sub? I’d go with pizza. Also, Little Caesars gets the nod here for continuing to innovate. They went thin crust, got delivery and even kept their $5 pizzas at $5. A $5 footlong at Subway will not cost you $16.34 depending on what size chips and drink you get.

10 Cookout over 2 Burger King. Cookout was a really good team built around one-star player, only that star player got hurt and missed all the conference games. Now he’s healthy and the team built a little identity without him and they’re ready to go on a run. Burger King put up a good fight but those Mac N Cheetos shits they had were a -19 in seven minutes played. Hate to see it, Mark. 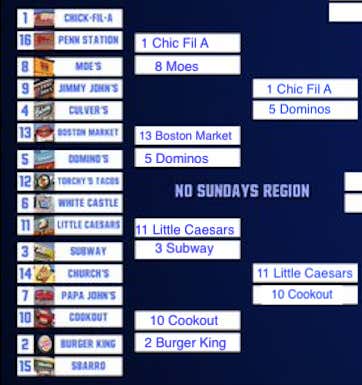 9 Zaxbys over 1 Five Guys. Zaxbys gets the nod here for the sole fact that they don’t try to drown you in their shit fries the way Five Guys does. They give you a duffle bag full of terrible fries in hopes that you don’t realize you just paid $11 for a solid burger.

13 Firehouse Subs over 5 Bojangles. The nod here goes to the fact that I don’t know if there’s a restaurant on this entire bracket where the experience differs more by which particular one you go to than Bojangles. Not even Pizza Hut. I either get the Boberry biscuits hot out of the over or the ones from the store’s trial run in 1993. The Botato rounds are either perfectly seasoned or horrifically over-seasoned. Firehouse subs taste the exact same every single time and I can appreciate that over the variances of Bojangles.

3 Popeyes over 6 Jack In The Box. Popeyes is the 2013-14 Kentucky Wildcats. They had all the tools to dominate…only they didn’t dominate. The Cats’ three losses to Florida that year was Chic Fil A dominating the chicken sandwich game every single time because Popeyes wouldn’t get their act together. Until they did. The Popeyes chicken sandwich was Julius Randle realizing he was much bigger than everyone else, Aaron Harrison deciding to make game-winning shot after game-winning shot and James Young deciding to dunk teams through the Earth’s crust all wrapped in one. The sandwich is reloaded and ready to go on a run. Popeyes in a laugher.

7 Long John Silvers over 2 In N Out. They’re going to yell at me. I don’t care. Both of these places are fine but only one of them is hyped like it’s elite cuisine. In N Out is a decent burger, bland fries, and solid shakes but if you go to California, people will tell you to make sure you go there like it’s required dining. Long John Silvers can scratch that “””seafood””” itch in a pinch and they are scattered enough to where it’s a pleasant surprise when you encounter one. And they have crispies. 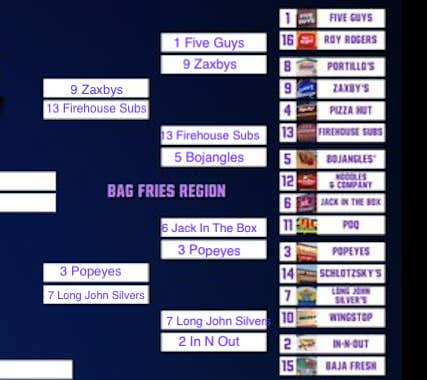 1 Wendys over 9 Checkers. Wendys is the Villanova program. So solid for so many years, and they kept tweaking and improving enough to win a title. And then they kept improving, Wendy’s by adding breakfast and Villanova by winning ANOTHER title. Wendys makes light work of Checkers here.

4 Shake Shack over 5 Steak N Shake. These are slick the same place only Shake Shack went to grad school and took a couple of marketing classes. As I write this, I’m wearing Shake Shack socks because that black/green is fire. They get the nod.

15 El Pollo Loco over 10 Qdoba. The in-house bird roasting pays dividends again. Neither one of these teams should have made it this far but here they are. And one has to advance, unfortunately. 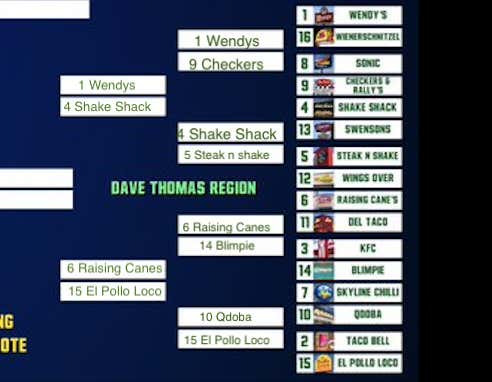 And just like that, our field of 32 is now 16. Join us tomorrow when we get to the Elite 8. Take care, stay home if you can, rest up and wash up. 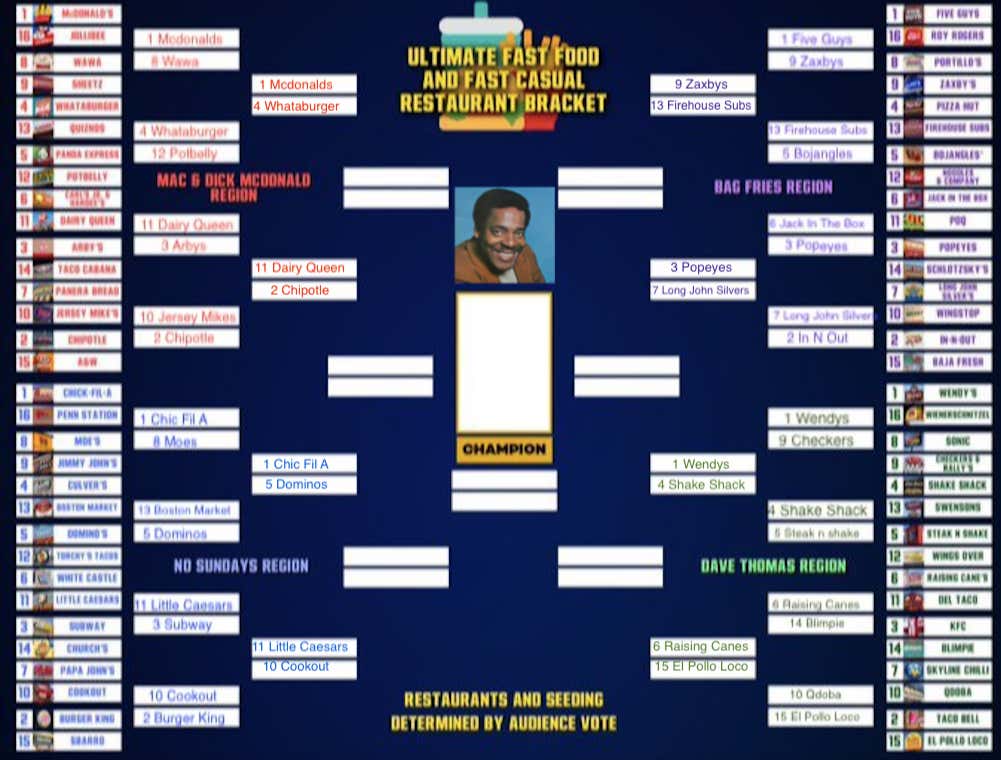