You can find selections/criteria from round one here, round two here and round three here. Today we get to our Final Four, and as you know, those matchups can sometimes be better than the championship game. Let's get to it.

11 Dairy Queen over 1 Mcdonalds. That’s right. What’s that about “hard work beats talent when talent doesn’t work hard”? Have you ever went to Dairy Queen for a Blizzard and had them apologize for the Blizzard Machine being down? Of course not. Blizzard Machine shows up every night, 25/10 on Chipotle, 38/8 on Arbys. It’s shades of Kevin Durant at Texas dominance. Come to think of it, have you ever left Dairy Queen without what you came for? Chicken tender basket? Check. Entire cookies and cream ice cream cake for one (1)? Check. Snickerdoodle cookie dough blizzard? CHECK AND DOUBLE CHECK.

Have you ever left Mcdonald’s empty-handed? Without the Mcflurry you came for? Told that they just stopped serving breakfast 82 seconds ago and you just missed them. That they have to inform you but they don’t have a single McChicken in the tricounty area. Of course, you have. Because Mcdonalds has off nights, like everyone. Tonight it just so happens to cost them a spot in the final four. Dairy Queen moves on. 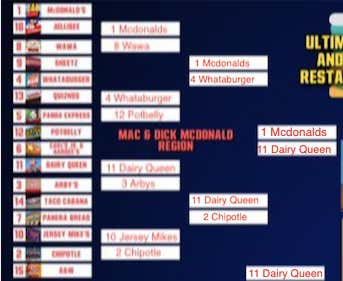 10 Cookout over 1 Chic Fil A. Down goes another titan! Chic Fil A gets hype for its tremendous customer service, and rightfully so. Well guess who took “my pleasure!” from right under CFA’s nose? That’s right! More like Cuckout! Cookout took saying “my pleasure!” after/before/during everything and Popeye’s took the chicken sandwich market. Cookout doesn't even give you a damn bag with the food. They know it just contributes to paper waste and gets in between you and your tray of choice.

Sounds to me like someone was a #1 seed that whooped up on a weak conference schedule. They started grilling nuggets and being polite and took the world by storm. Make no mistake, it was a genius move. It's the reason why they have the banners they currently have. But this year? This tournament? Amongst the elite, CFA has gotten bullied all the way home. Cookout advances. 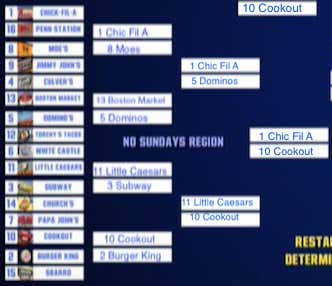 3 Popeyes over 9 Zaxbys. Our dream game of Zaxbys/Raising Canes comes to an end because we never really get a single fucking thing we want, do we? Brackets imitate life. Zaxby’s doesn’t have a single item on the menu that can outduel the spicy chicken sandwich toe-to-toe. There’s no shame in it, as few restaurants can claim that they do. But when you’re both in the chicken lane, it’s a bad look to have Popeyes literally shut the streets down for the sandwich. What item could Zaxbys sell that would have stores closing early and hiring extra security? Sorry, wings n things ain't hitting quite like that. Zaxby’s also loses points for getting rid of their best menu item: the birthday cake milkshake! They basically expelled the five-star recruit before he really got going because they found a little weed in his dorm room. We care but do we really care? The answer is no. The shake should still be there damnit. And maybe if it was, Zaxbys would still be dancing. 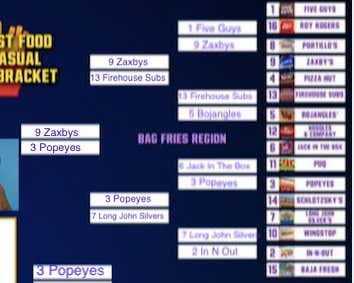 1 Wendys over 6 Raising Canes. Our third #1 seed to make the elite eight but our only one to advance to the Final Four! When it comes down to it, Wendy’s is too versatile for Canes. They have breakfast, dessert and more than four things on the menu. Also, the frosty is an all-time dessert and their birthday cake frosty (HINT FUCKIN HINT ZAXBYS) is primed for a big run next season if we live through the night they bring it back. They foolishly removed spicy nuggets but brought them back, they keep adding bacon to the Baconator and Raising Canes can’t compete with the 4 for $4. Canes had a good run and should be in the lab as we speak working on a chicken sandwich that isn’t just multiple tenders on a bun. The right sandwich with that sauce? We could see a hell of a run next season. Wendys winning the Dave Thomas region? Smells like payola to me if you know what I mean. 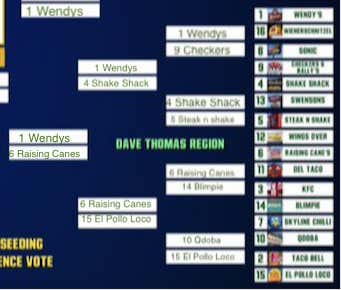 What I mean is that I am absolutely open and available for bribes from any of the establishments left. Or even some of the ones that have been eliminated. Hit my line and we can work something out.

And just like that, we are down to our FINAL FOUR! 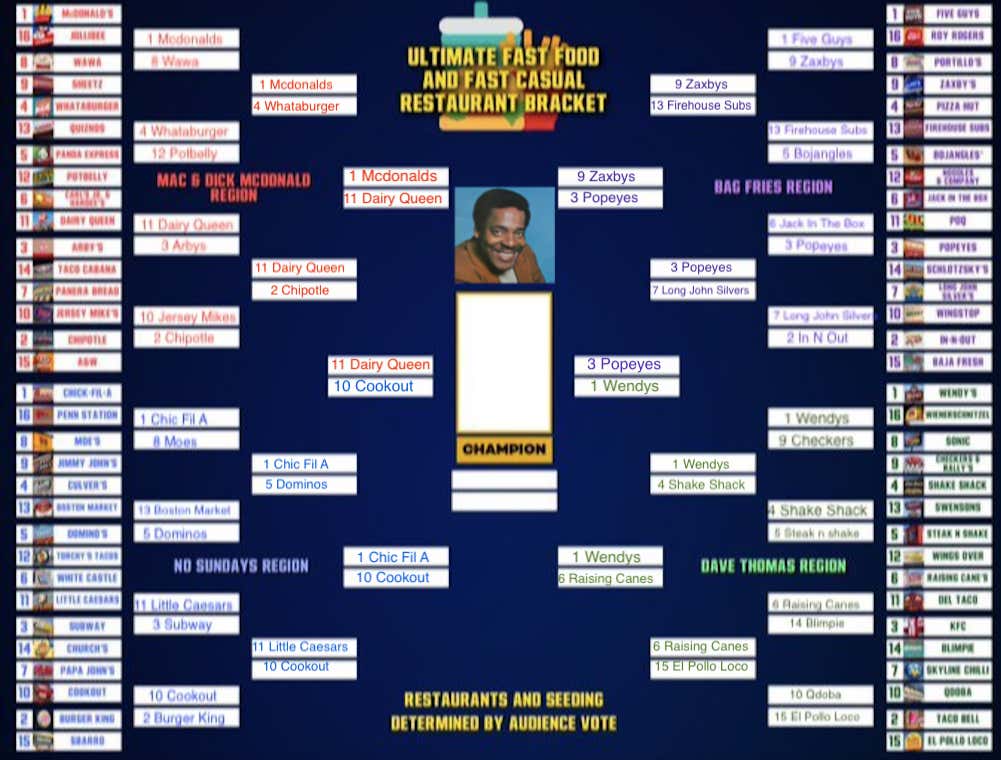