So Donnie Does hit me up earlier in the week and asked if I'd like to take part in an international drinking contest. I responded "yes" without thinking twice about it. I had no idea what I was going to be doing but I take pride in my beer drinking abilities, so I figured it was a no brainer. Now my marathon heroics have been subtly detailed since I completed one in 2017, and that's exactly how I am with beer. I can drink all night but I can't drink fast. I'm some 130 pound Kenyan who can go all night, not Usain Bolt.

That, and I've never done anything with Donnie before. That guy is a content FREAK, a true character in every sense of the word, so I figured I'd latch onto him a bit and either A. make a fool of myself or B. dominate yet another challenge. Either way, it'd create a good talking point.

Watch the video to see what happened, but I knew I was doomed from the start when Donnie texted me a pic of the dude I was going against. 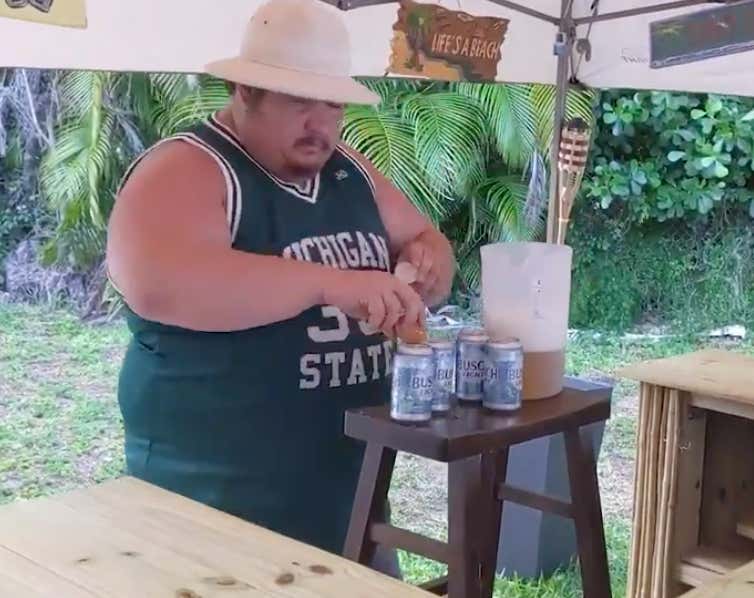 A loathsome, offensive brute. There's not a doubt in my mind this guy puts down 30 racks of Busch Heavy like they're shots of water.  I stood no shot and if we're being frank, I think I was sabotaged and it was a set up. But that's neither here nor there.  I have a WEAK stomach when it comes to gross shit. I couldn't watch Fear Factor growing up, I hate gory movies, and a strong fart can activate my gag reflex.  I know that makes me a pussy, believe me. There's nothing you can call me that I won't agree on when it comes to how big of a bitch my stomach is.

That's cool though.  Dana Beers lost in episode one:

And I want a shot in the consolation bracket. Pangzai, get us a challenge. Dana, you're up next.