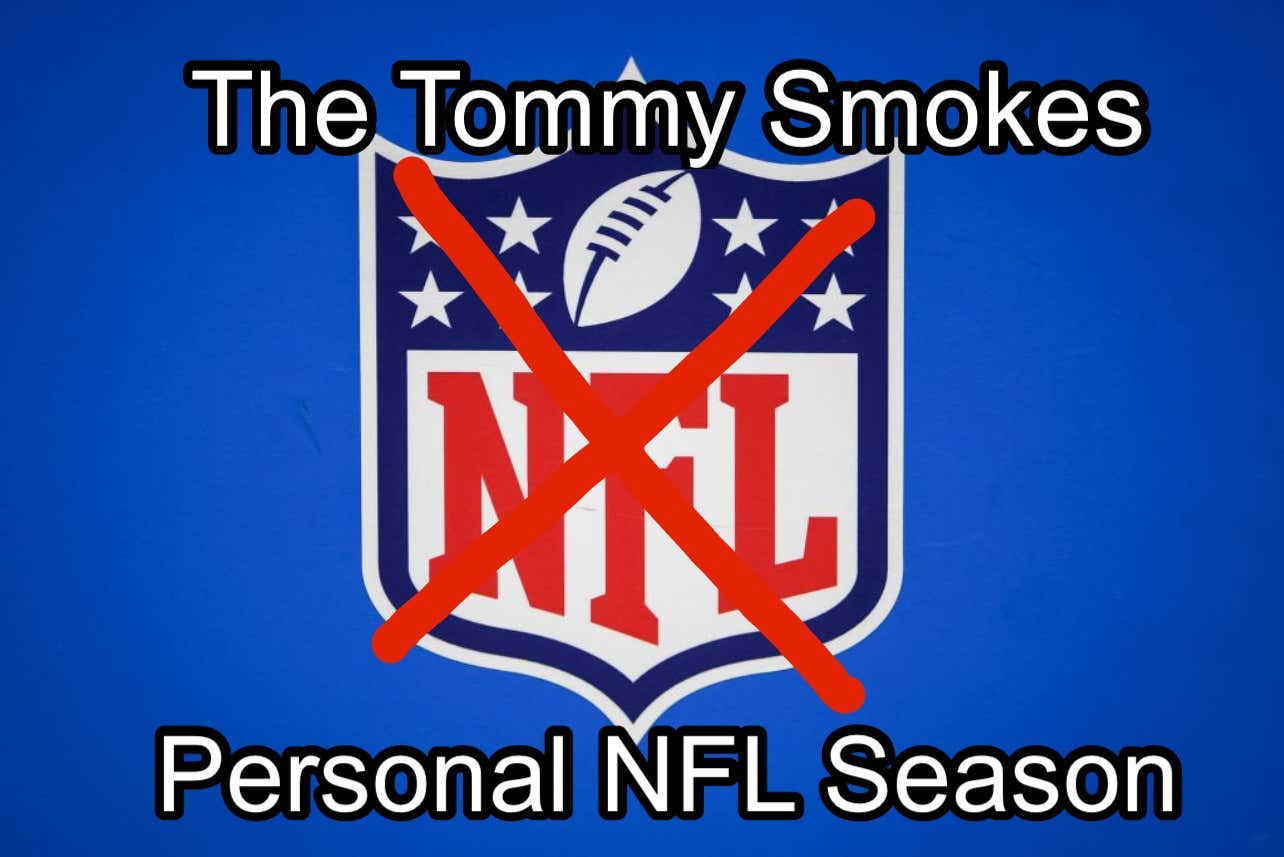 CATCH UP ON THE WILD CARD ROUND HERE

CATCH UP ON THE DIVISIONAL ROUND HERE

CATCH UP ON THE CONFERENCE CHAMPIONSHIPS HERE

Well, we've made it to the Big Game. To catch you guys up on what's going on here. I created my own NFL season and kept results all season long. It's based on what I think should have happened and a little bit of what I wanted to happen. It's as objective as it gets and more fair than the actual NFL.

We're down to two teams now. The Buffalo Bills out of the AFC and the Cinderella Detroit Lions out of the NFC. Two cities desperate for a championship squaring off. The Bills were 6 point favorites coming in, as people doubted this Cinderella Lions run would continue. Would Josh Allen get his first ring? Or would Jared Goff win one in the home stadium of the franchise that exiled him? Let’s find out. It’s the Tommy Smokes Personal NFL Season Super Bowl.

The Bills were in their white jerseys as the designated road team. The Lions were in their powder blues as the designated home team. Josh Allen called heads and won the toss (because tails sometimes fails), electing to receive. A decision that proved wise. The Bills marched down the field with ease on their first drive. Allen hit Dawson Knox (who I love to bet for first TD) on a 9 yard TD pass to go up 7-0. The rest of the first quarter had little action. Just punts. Bills up 7-0 at the end of one quarter.

Early in the 2nd quarter, the Lions Jack Fox had a beautiful punt to pin the Bills at their own 1. After gaining no yards on the first two downs, Allen was in shotgun on 3rd. He rolled out to his right and looked downfield, Trey Flowers rushed him and got his arms around him and Allen tried to throw it away, but nobody was close. Intentional grounding was called, and it was a safety! 2 points for the Lions to make it a 7-2 game. (I luckily bet for there to be a safety in the game). The Lions had good field position after the safety punt, but couldn’t get anything going. They punted away and the Bills would get a FG on the following drive, going up 10-2 with 6 minutes to go in the half. The Lions had a long drive. With 20 seconds left, Detroit was on the Bills 2 yard line. Goff rolled out to his right, looked for St. Brown in the endzone and…… intercepted! Jordan Poyer made a great catch to stop the Lions from scoring. What a stop. So heading into half, the Bills lead 10-2 in a whacky game. Lucky for me, I had 0 and 2 in my box pool. Another winner. The Lions offense needed to pick it up in the second half. Jared Goff was just 7-16 for 71 yards with that interception.

After an awesome halftime show with surprise performer Bow Wow (I just really like Bow Wow), it was time for the final 30 minutes of action. The Lions got the ball to start the half and they looked like a new team. They marched down the field, with a 47 yard pass to St. Brown getting them deep into Bills territory. They capped off the drive with a 3 yard TD run from D’Andre Swift. At 10-8, the Lions went for 2 to tie up the game but Goff was sacked. 10-8 Bills. Buffalo answered with a quick TD drive of their own. Allen hit Devin Singletary (my cousin through marriage) for a TD on a 28 yard wheel route. After the XP, it was 17-8 Bills. 2 possession game with 7 minutes left in the 3rd quarter. Lions punt. Then Bills punt. Then Lions punt again. The Bills had the ball as we head into the 4th quarter. They had a nice drive which ended in a FG with 12 minutes left in the game to go up 20-8. It was do or die time for Detroit.

And on the ensuing kickoff…… Godwin Igwebuike takes it to the house!!!!!!!! A kickoff return TD and just like that, Detroit has all the momentum! It's 20-14 Buffalo pending the XP. But there's a bad snap. Goes over the holder's head and kicker Austin Seibert has to just chase it down and fall on it. So no XP and it stays 20-14 Buffalo. The Lions kick it off to Buffalo and….. Isaiah McKenzie ALSO TAKES IT TO THE HOUSE. OH MY GOODNESS. What a game we have on our hands!!! Back to back kickoff return TDs for the first time in Super Bowl history!!! (I assume). It’s 27-14 Buffalo. Still 11 minutes on the clock. The Lions put together a great drive. But it takes a lot of time off the clock. Goff hits Josh Reynolds for a 12 yard TD with 4 minutes left. It’s now 27-21 Buffalo when they get the ball back. The Lions have all 3 timeouts. The Bills get a couple first downs but between Detroit’s timeouts and the 2 minute warning, the Lions are able to get the ball back with 1:40 left on their own 12. No timeouts. Down 27-21, can Jared Goff lead his new team to glory in his old team’s stadium? Let’s find out.

3 incompletions to start off. Yikes. On 4th down he rolls out, nobody open, Goff keeps it himself and has room to run! He gets the first down and more, sliding down at his own 28 after a gain of 16. Lions hurry up and spike it. 1:02 left. Out route complete to St. Brown along the sideline for a gain of 14 to the 42. 56 seconds left. Next play is a dump off to Jamaal Williams over the middle for a gain of 6. Clock still running. Next play Goff looks deep along the left sideline and completes to Josh Reynolds who makes a spectacular, diving catch! Down to the Bills 18 yard line! But he comes down in bounds so the Lions have to hurry up and spike it, which they do with 18 seconds left. Next play Goff takes an endzone shot to Kalif Raymond that’s incomplete. 11 seconds left. On the next play, Goff drops back, looks over the middle, throws it up to TJ Hockenson over the middle in double coverage. Hockensen leaps for it in the endzone and……. MAKES THE CATCH. HE MAKES THE CATCH. TOUCHDOWN LIONS. TOUCHDOWN LIONS. What a drive!!! It’s 27-27 with 3 seconds left. Detroit is just an extra point away from being Super Bowl champions. Snap is good. Hold is good. Austin Seibert’s kick is….. WIDE LEFT. He missed it! Of all the dramatic things! The Lions sideline goes from elation to agony in seconds. The city of Detroit can’t believe it. Is this team cursed? After a squib kick, this game is heading to overtime knotted at 27. Just the second overtime in Super Bowl history.

Josh Allen calls heads again in the overtime coin toss, and wins again. Tails fails. They receive. A touchdown here and the Buffalo Bills are your Super Bowl champions. The Bills get a couple first downs and are at midfield. But Detroit’s defense comes up with a big stop. On 3rd down, Michael Brockers sacks Josh Allen, forcing them to punt it away from their own 40. Matt Haack comes out to punt and boots it deep. Kalif Raymond fields it at the 8 yard line. No fair catch called. He makes the first man miss and cuts it up field. He gets a great block and takes it to the outside far sideline. Makes another man miss! He’s crossing midfield. Gets past another man! Just the punter to beat. He jukes him out! Raymond is all alone! 30. 20. 10. 5. TOUCHDOWN DETROIT!!! TOUCHDOWN DETROIT!!! Kalif Raymond with a 92 yard punt return TD in overtime to win the Super Bowl!!!!!!!!!!!!! Detroit has done it!!!!!! A 33-27 win!!!! Al Michaels paraphrases his most iconic call, “Hey Detroit, do you believe in miracles?!? THE LIONS ARE SUPER BOWL CHAMPIONS FOR THE FIRST TIME EVER!” (I also won the final score box pool!)

Holy fucking goosebumps. Pandemonium at SoFi Stadium. The city of Detroit is going insane. Jared Goff is named Super Bowl MVP. He finished 24-49 for 273 yards, 2 TDs, 1 INT, and 24 yards on the ground. It wasn’t the prettiest game. But it was enough to win. And he put together two amazing drives in the fourth quarter. So congratulations Detroit, you’re Super Bowl champions!

Tune in next year to the Tommy Smokes Personal NFL to see if the Lions can repeat.