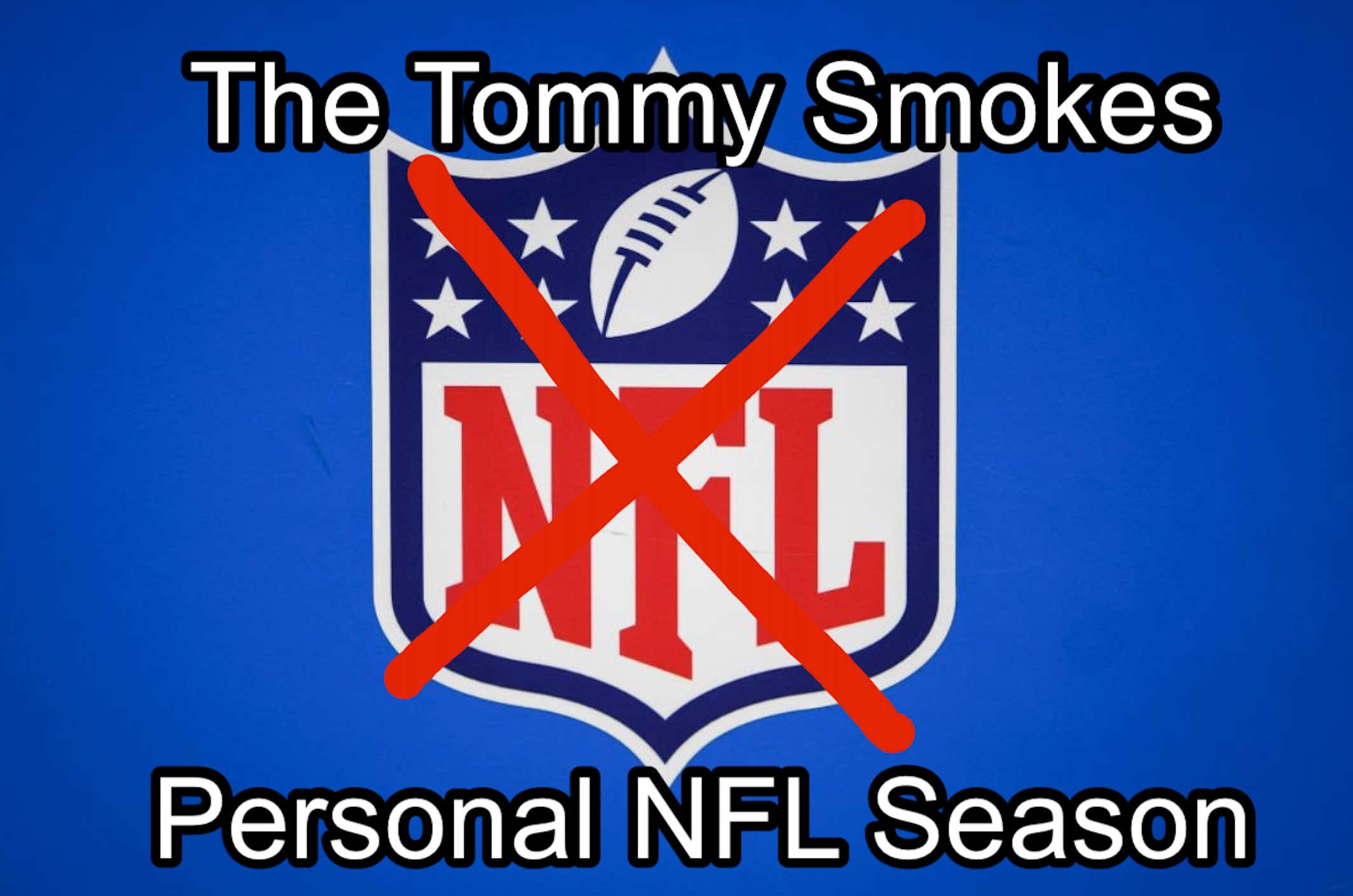 The 2021-2022 season has come to a close. And it's likely that the season didn't end the way you hoped it would. Unless you're a Rams fan. But I don't think they exist. Well, lucky for you guys, I created my own football season. Week after week, I decided who the winner of a game actually should have been. Sometimes teams get unlucky and are better than their record indicates. Sometimes teams get lucky and aren't as good as their record says. Well, that's where I come in. The Tommy Smokes Personal NFL Season is fair and just. It's based on the eye test. Gut feel. What I want to happen. And tons of personal bias. So it's basically as objective as it gets.

I updated my standings week after week on Twitter and held my own playoffs. I only tweeted them out and my god, the interaction rate was stunningly low. I think there were about 4 total people who followed along all season and I can pretty much remember their avatars. Last week on The Short Porch, Coley and Hubbs asked why I hadn't blogged this season and I told them how it was quite simply astounding how few people seemed to care about a make believe football season created by a blogger. I didn't think it was worthy of going on the website. But maybe these lengthy explanations are better suited for blogs instead of tweeting a bunch of screenshots of my Google Doc with like size 6 font words. I think they are right.

So this week I will be blogging a part of the season each day. Today is our regular season recap. Tomorrow Wild Card Round. Wednesday Divisional Round. Thursday Conference Championship. And Friday The Super Bowl. Buckle up.

As you can see, I thought this division was overall better than their records indicated. The Bills had a mid-season slump but to me were still one of the best teams in football. The Dolphins were a team I had my eye on all season. Even when they started 1-7, I felt they were way better than their record indicated and had them at 4-4. They then turned it around in the second half, just as I expected they would. Proof that sometimes my standings are more accurate than the actual standings. The Jets were also feisty towards the end of the year so they get an extra win.

This division was pretty accurate to the real world outside of the Steelers. I think everyone in the world knows the Steelers weren't actually a 9-7-1 football team. It's stunning that they somehow managed to squeak that record out in the "real world." But I saw right through them for being the frauds they truly were. They missed the playoffs in my world.

The Titans were docked a win because I was often unhappy with their usage of D'Onta Foreman who was on my fantasy team and is maybe the most underrated player in football. The Colts were the Colts. The Texans were competitive in a lot of games so get an extra win. The Jags sucked.

Despite early season struggles, the Chiefs were still the Chiefs and by the end of the season they were so good that I was taking away losses from earlier in the year (which is allowed in my world). The Broncos are docked a win due to them playing such an easy early season schedule. The Raiders and Chargers were pretty true to form, with the exception of 10 wins feeling like a liiiitle too much for the Raiders. They get the tiebreaker over the Chargers though because Brandon Staley is an idiot.

Only some slight changes here. The Chiefs get a bye for being the true best team in the AFC this season. And the Dolphins make the playoffs because I felt they were better than the Steelers. I also kind of just like the Dolphins. And that does matter.

While I am a Giants fan, I felt that just making them win the division and then the Super Bowl would be unrealistic and also lack integrity. And my league is full of integrity. So I felt what's more likely and also good is them getting the #1 overall draft pick. And it would also ensure the whole coaching staff and front office was fired (which did happen in real life too). Everything else pretty true to form here except for the Eagles not being quite as good as their record indicated.

The Lions clearly stick out here. But anyone who followed that team this season knows they were the best 3-13-1 football of all time. They were competitive and feisty week in and week out. I felt they deserved many more wins than they ended up with. Basically if they were close enough in a game, they got a win. I really like the city of Detroit and the Lions franchise. I just won a Super Bowl with them as their quarterback in Madden. So there's slight bias here, but I truly believe this could've been a playoff team if a few things broke differently. The Bears get two less wins because they sucked but also because the Giants own their first round pick, which moves to #3 overall here. Giving them #1 and #2 would've not been fair.

The Taysom Hill effect here for the Saints. As the first Taysom Hill hater, I'll always maintain he's the most overrated player in football. I was saying it before that was the popular opinion. He's the NFL's diner: Jack of all trades, master of none. Put any other athletic player in his role and force feed him the ball as much as the Saints do, and they'd put up similar numbers. As for the Panthers, I like that "roar" they do when they get a first down and think they have cool uniforms, grabbing them two extra wins.

Everything was pretty much accurate here. The 49ers lost to the Lions in Week 1 in my world (based on that great Detroit second half), but other than that I felt this division was pretty dead on with reality.

The Eagles miss out on the playoffs because let's face it, they kind of sucked. Not sure how they made the playoffs. The Lions grab their spot instead.

So that's a wrap for our regular season. Tomorrow is the Wild Card Round, where we'll have these matchups.

Some exciting games on our hands. Tune in tomorrow for results!