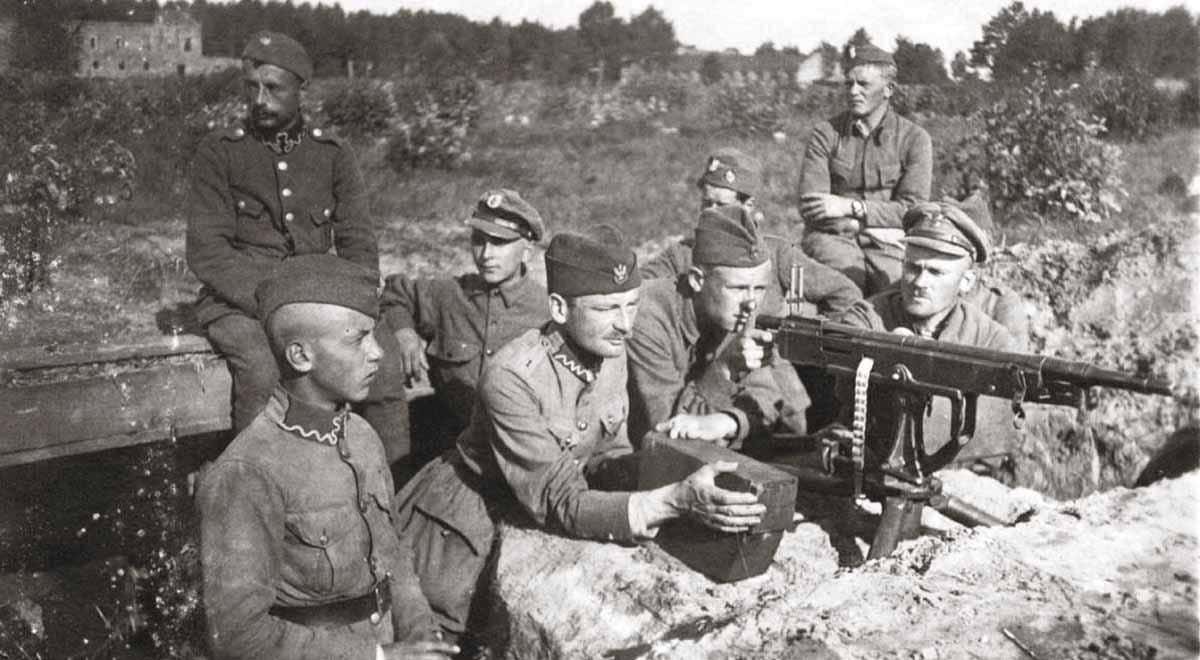 Dive #7:  A Massacre By The Mormons In Utah

Dive #8: The Japanese Invasion of Alaska

TLDR: The newly formed Poland and Russia had a massive, but short war after WWI with big consequences.

I know early 20th century Poland and the Soviet Union seem to be a common theme to these, and that's because that period is super interesting to me. I remember reading a brief summary this war when I was in high school that basically said that Poland had won and that was that. The truth, though, is way more interesting.

Between the end of of the Polish-Lithuanian Commonwealth in 1795 and WWI, independent Poland didn't exist. In the wake of the war during 1918, they rebelled against the collapsing German Empire and carved out a large chunk of territory in Greater Poland. Their success had a huge impact on the treaty making in Versailles, where they ended up keeping all the territory they reclaimed + much more. With the Empires to the east and west in full collapse, Poland(And Finland, Estonia, Latvia & more) started trying to carve out their own piece of the pie.

The New Poland had battles with the new Ukraine, new Germany, and new Czechoslovakia over territory and the vague theory of self determination that was put out there at Versailles. Say a city in Poland, far past the border, is 70% ethnically Ukrainian. Do you have to give that city to Ukraine? What about vice versa? Do you just end up with a map that looks like preteens acne? Nobody could figure it out and it's partially what helped lead to WWII. Here is what Poland ended up with: 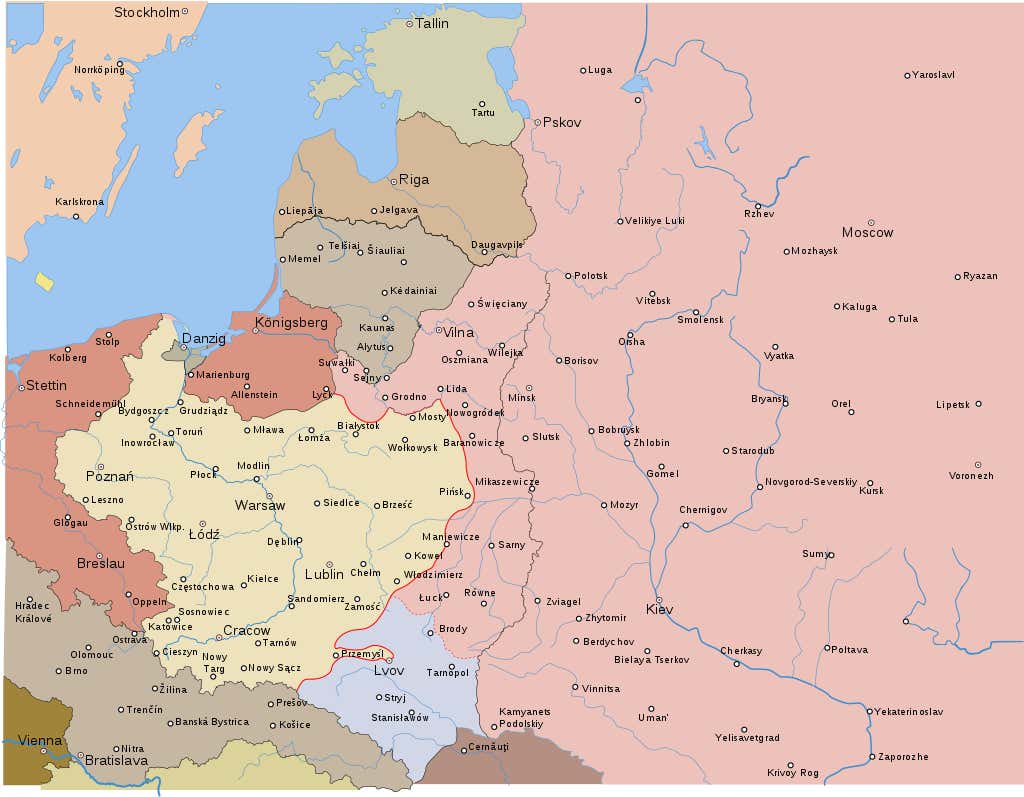 (The Polish border after Versailles)

In Russia, the Bolsheviks had come out on top of the revolution and Lenin had big plans for Eastern Europe, including taking back everything the Russian Empire had surrendered in the war. They set up puppet states in Lithuania, Belorussia and Ukraine, and had plans to get all the way to Germany, which Lenin wanted to convert to a socialist state as well. This ran right up against the Polish vision, which was to create a federation of those same countries to act as a counterweight to the power of both Germany and Russia. 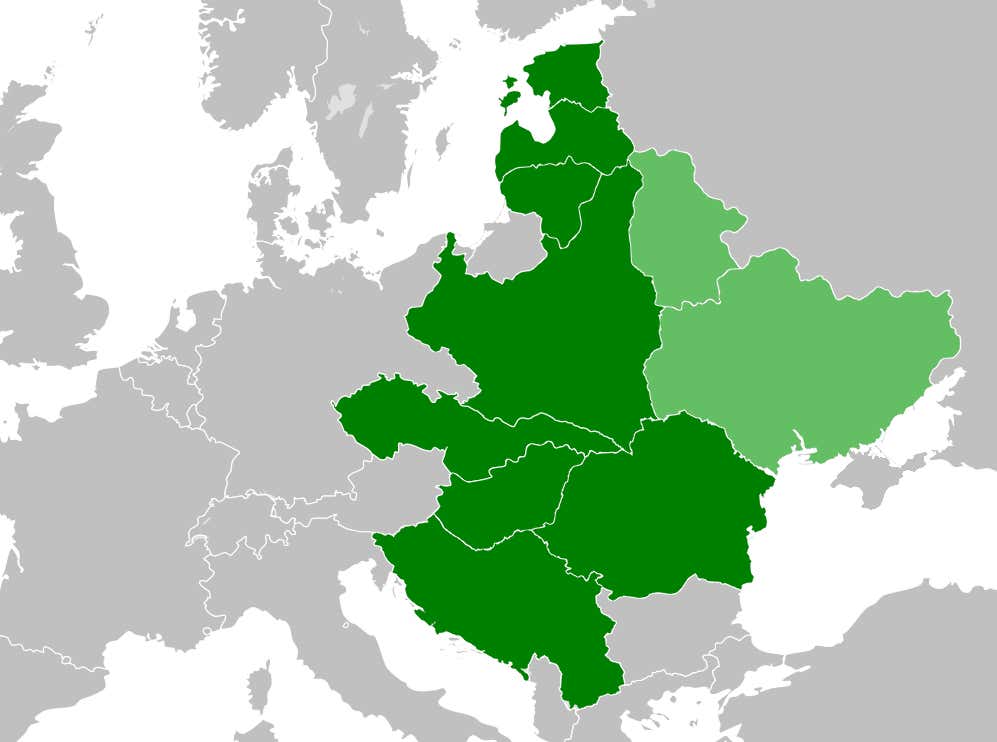 (Intermarium - The proposed federation that Poland wanted to put in place)

After the Bolsheviks took Vilnius & established their puppet state in 1919, the Poles sent an army to liberate the region. They took back Vilnius and attempted to jumpstart the new federation with Lithuania. The Bolsheviks sent their own army to recapture it, but were beaten back by the Poles who then took more territory in the region. The Poles advanced into Ukraine and Belarus, taking Minsk in the north and reaching Romania in the south. It was basically non-stop winning, but it was also not going to last. The Bolsheviks had their war with Poland on the backburner because they were already deep in the fight vs the anti-communist White movement near the Crimea. The Whites had momentum and support from the Allies, who did NOT want the Bolsheviks to retain power in Russia.

This is where the Poles made a big mistake. They stopped their advance towards Russia and refused to join the Allied support of the anti-communists. In their eyes, the White government would lead to a weakened position for Poland. They thought if old Russia were restored, they would be right back where they started and the Allies would make sure it stayed that way for the sake of stability. The way old Russia operated for centuries was to weaken and dominate every area the of Intermarium, the proposed federation of eastern European countries Poland had in mind.. The Bolsheviks, on the other hand, had outright declared that Poland had the right to self-determination and that the Russian Empire's previous partition of the country was illegal. If Poland had joined in and helped weaken the Bolsheviks, the USSR may have never come to pass.

The Poles made a deal with Ukrainian politician Symon Petliura, who had fled Ukraine after the Soviet takeover, for them to help take back Ukraine in return for the country joining the new Federation. Most Ukrainians hated this, because they viewed Poland as their true enemy. The Polish army had looted the parts of the country they occupied, and put over 100,000 people into concentration camps. A lot of Poles also didn't want an independent Ukraine either. Regardless, the Polish Army along with a sizeable Ukrainian force got ready to invade Soviet held Ukraine in order to establish a pro-Polish government.

In April 1920, they attacked Soviet Ukraine and pushed the Red Army all the way to, and past, Kiev. The Soviets responded by attacking in the north, pushing the Poles out of Belorussia while their best troops were still in Ukraine. The Poles managed to take back their territories there, but then got pushed out of Ukraine in the meantime. The Soviets managed turned this conflict into the rallying cry for the now more-stabilized Russia. Poland became the external threat that made people forget about their internal hurting. This helped them build up a 3:1 advantage over the Polish forces before they launched a full on assault into the Polish-held territory. 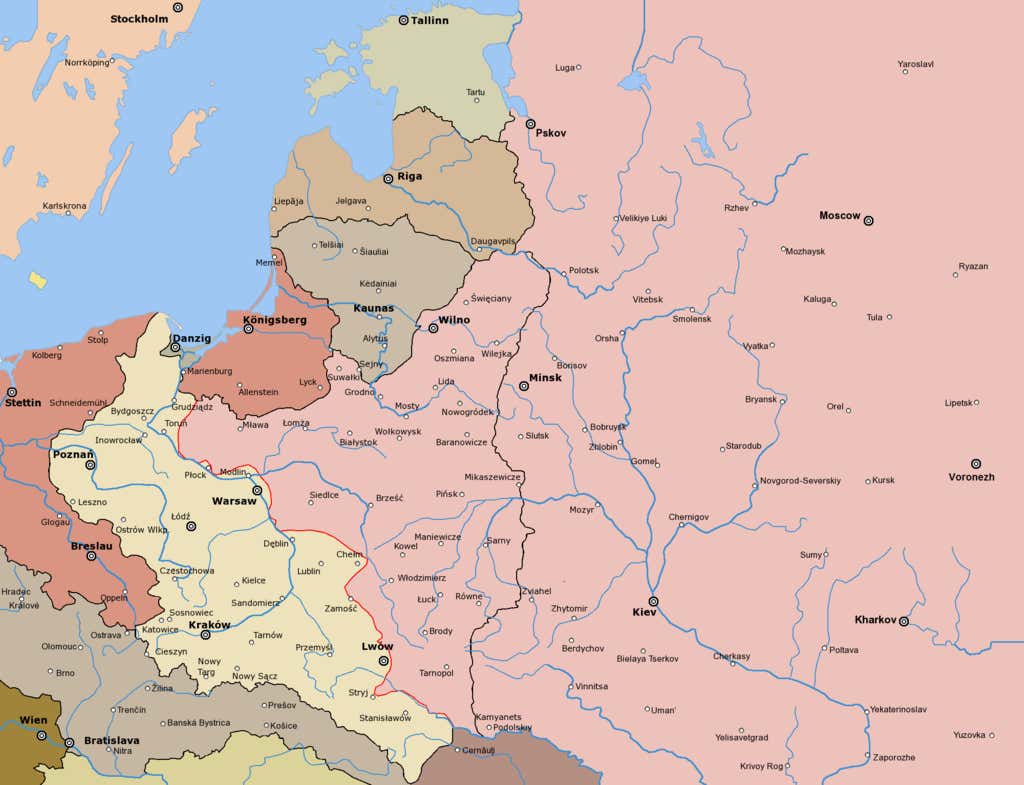 (The Russian advances into Poland at their heights)

The Red Army pushed into Poland real fast, with the Polish army retreating to more strategic spots near Warsaw. As the Polish supply lengths got smaller and the war-weariness turned into war-fervor, the Russian supply lines became thin and they faced harsher resistance. The Allies, who hated the Soviets more than they were angry with the Polish for refusing to help them earlier, had been supporting the Poles with arms, advisors and more. The ended up using this leverage to make an agreement with the Polish, offering support in mediating the conflict in return for a number of concessions that essentially killed the dream of a Polish Federation.

The Red Army began their march on Warsaw, which would have been a symbolic killing blow for Poland and a sign to the world that Soviet Russia was there to destroy Versailles Europe. This is where a young Stalin comes into play. He was a high ranking military official at the time, and ordered an army that was participating in the assault to deviate and take a city near Warsaw first. That army got held up in the fighting there and was unable to participate in the upcoming battle of Warsaw. During that battle, the Russians attacked the city from the east where they were stopped in their tracks. The Polish then launched a counter offensive from the south, cutting off the attacking forces from the rest of the Red Army & destroying them. By the end of it all, the Polish had 4,500 dead while the Soviets had 125,000 total casualties.

During the Russian retreat, the Polish defeated the Soviet 1st Cavalry Army, which had earlier been redirected by Stalin, and destroyed them in the last large scale cavalry battle in history. The Poles pushed the Soviets out of their pre-war territory, beating them in a bunch of major battles, and continued to take back most of the land they had occupied at the height of the war. In 1920, as winter began approaching both sides slowed their fighting. The Soviets had their major armies and been destroyed, and they had other domestic fish to fry like a major peasant revolt + the remainder of the white army. The two sides came to an armistice which basically reset  the borders to the Versailles-agreed lines. It also establish Soviet states in Ukraine and Belarus, which was basically the killing blow of the Intermarium. Instead, it was the Soviets that accomplished what Poland wanted.

Poland had the fairly clear military victory in the micro, but lost the macro here big time. It's tough to deal with what ifs, but there are two big ones here in my opinion:

1. What if Poland decides that the Soviets are the bigger threat? What if they join the allies in supporting the White army, and invade deep into Russia on the pretext that they are for Russia but against the Bolsheviks? Maybe they occupy enough Soviet forces in Ukraine that Anton Denikin takes Moscow back and goes on to destroy the Bolshevik Revolution? There would be no USSR, for one. WWII would definitely still happen, but without the unified Soviet countries against Germany, maybe the Nazis win. Or maybe something even worse. Denikin was a huge anti-Semite, and he could have lead the Russian Republic into an actual alliance with Nazi Germany that doesn't lead to an eventual Operation Barbarossa.

2. What if Stalin is killed during the war, or is at least more appropriately blamed for his role in the battle of Warsaw + the embarrassment of Russia? Lenin died in 1924 and was succeeded by Stalin after political maneuvering. He wiped out all of his opposition within the country, and removed the university educated subordinates(Old Bolsheviks) and replaced them with working class toadies whose loyalty he could control. If Trotsky takes over instead? Trotsky was as fanatical about communism as Stalin was, but he was also more intelligent. I can't imagine he would have purged all the scientists, killed his generals, or lead the Soviets into a massive starvation caused by the subject of a previous Deep Dive. Maybe he leads the Soviet Union into being the strongest superpower coming out of WWII with the best leverage. Maybe they invent the bomb first! Maybe We would all be speaking Russian right now!