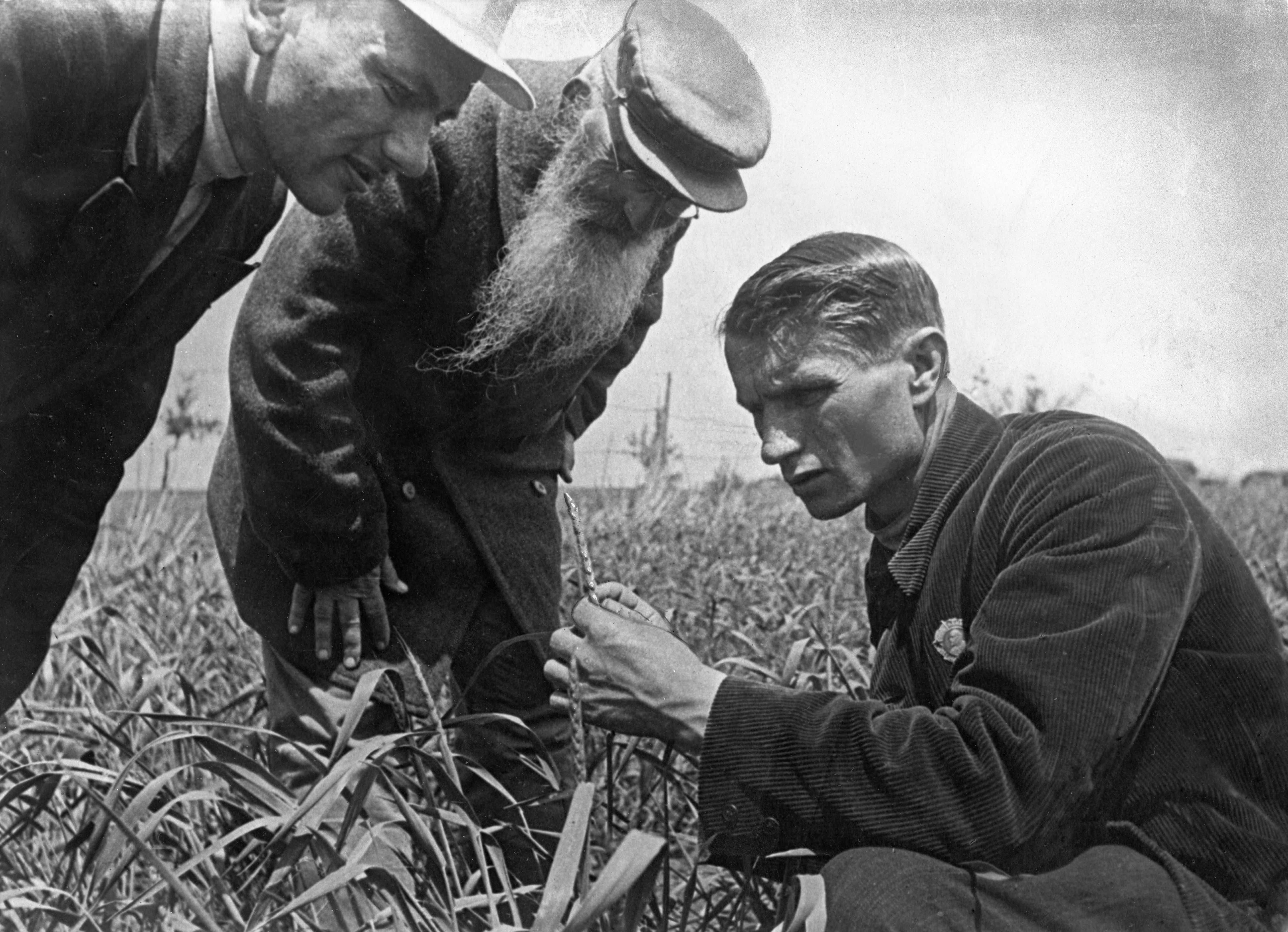 Note: I feel like I spend a ton of time, mostly late at night or on the can, going on wikipedia deep dives of random shit. So instead of keeping this interesting shit to myself, why not share it with you! So welcome to this brand new blog series

Trofim Lysenko was a Soviet agriculturist and biologist that did most of his "work" from the late '20s until the mid '60s. He was fascinated by a number of different ideas, and invented a a number of pseudosciences we can classify under Lysenkoism.

Some of those ideas include:

- The Inheritance of acquired characteristics: This was the belief that parent organisms could pass on traits gained by use, disuse or habit to their offspring. I.E. if a giraffe had to stretch its neck to get leaves on tall trees during its lifetime, then its offspring will have inherited the genes for long necks. This was untrue and already disproven by western scientists before Lysenko stated it.

- Vegetative Hybridization: This was the believe that you could graft one plant onto another and the root would pass on its genes to the plant. This is untrue and already proven wrong by western scientists before Lysenko stated it.

- He claimed that he could transform one species of wheat into an entirely different existing one by planting it in an off-season. One of these species had 28 chromosomes and the other had 42, so this was literally impossible.

- A big practice of Lysenkoism was planting seeds very close together, with his science saying that seeds of the same plant would never compete with each other.The farmers would triple the density of seeds, then double them again with the promises of higher yields, all while forbidden from using fertilizer or pesticide. In reality, though, the seeds would compete with each other which caused stunted growth and low yields.

- He also advocated for "deep plowing", with the idea that more fertile soil was deeper in the ground. In shallow soil, though, this meant that sand, rocks and other useless soil were churned up and buried the fertile soil instead. This also lead to stunted growth.

- A complete rejection of Mendelian genetics and natural selection.

How did a guy like this get into power? Well, I'll tell you.

The Soviets collectivized their agriculture industry throughout the late '20s. This is when they combined the individually owned and operated farms into collective and state owned farms. Because of how fast this processed happened and how little planning went into it, it resulted in a MASSIVE famine starting in 1933 that killed around 14 million people.

Essentially, the Soviets were desperate for a win in this sector. Lysenko was propped up by the party because he was, first and foremost, a huge Leninist. He had also falsely claimed success across a number of experiments (He personally advocated against control groups and the use of statistics in science). Stalin took a particular liking of him, because his false claims had helped motivate the countries farmers into bending the knee to collectivism with promises of crazy opportunity due to his revolutionary science. Stalin also helped Lysenko launch what was essentially a political terror campaign against science. During his time, anyone in the field of science that opposed his viewpoints was discredited, sometimes jailed and sometimes executed. This practice basically destroyed the entire genetics, biology, and agricultural science communities within the USSR back nearly a half century.

4 years after the famines of 1932-33, there was a 163x increase in cultivated farmland in the country, but food production had actually decreased. The direct effects of this were somewhat lessened during WW2, since they lost about 15% of the total mouths of feed (24,000,000 millitary and civilian dead), but it is estimated that around 3.2 million Soviets in non-occupied territory died of famine during the war. If setting back the entire scientific field half a decade, having thousands of scientists killed, and causing millions of deaths via starvation wasn't bad enough, wait til you see what his work did to China.

As part of Mao's reforms during the great leap forward, he outlawed farm ownership and organized farms into communes. The agricultural economy became centrally planned, and along with implementing collectivism, they also adopted a lot of Lysenko's techniques such as the close grouping of seeds and deep plowing. This lead to the farmers making nothing but stunted crops with low yields.

This lead to the Great Chinese Famine, which has been estimated to kill anywhere between 15-55 million people.

It's hard to estimate how much of the famine was a direct effect of Lysenko's policies vs other implementations by the Chinese government, but it's a huge factor.

Lysenko became the Director of Genetics fo the Academy of Science, and held the post until 1965. After Stalin's death, his influence waned considerably as new scientists came about to replace all the ones he had killed, imprisoned and discredited. A group of three physicists brought together a large case against him, denouncing all his claims as pseudoscience. This lead to him being removed from his post, and later disgraced by the Soviet Press and more. He died in 1976, only getting a minor note in the Soviet media.