Hand up, the ‘Hot, Hot, Hot’ part is a flat out lie. My bad. Before you call me a liar or ‘Clickbait Kate’ for the rest of that video title, let me explain referring to myself as ‘Barstool’s Smokiest Smokeshow’..

By “Smokiest” I mean I ripped a pack of Marlboros + bummed multiple rando extras over a three-day span in Talladega. By “Smokeshow” I mean the BBQ sauce had a smokey flavor to it & I tried my best to put on a show (even though I failed miserably)…

Now, if you watched the video you’ll know that within several hours of arrival at the track on Friday I embarrassed the reputation of Marine Corps veterans everywhere, my employer, & myself in 600 gallons of tangy, watered-down marinade. I can totally explain what happened there though! *It was a fluke! (*Nope!)

In all honestly I had no idea what I was getting into until I saw it with my own eyes. I didn’t know there’d be a flag football element to it, or that there’d be nothing but exposed plywood edges where I could clumsily ‘Million Dollar Baby’ my neck, or that I was only an ‘exhibition wrastle’ after several rounds of them getting to the best fighter who’d just won $1,000. In fact, neither Dave nor I realized they’d have me fighting the champion at the end for zero particular reason, and she didn’t know it either. Thinking there’d be no motivation for her to want to continue with some gangly Yankee for no prize, I grabbed the mic & offered up an extra $500 of Dave’s money for her to take me down…

…Which she did in two rounds and about 10 seconds flat.

Dave legit had no idea I was going to do that, and on top of the $500 he’d also bet some of the NASCAR drivers I’d win, so I ended up costing him about $750 total in those 10 seconds. To make matters worse, he didn’t have the cash on hand so everyone was giving him a hard time. Though he’s a savvy guy well versed in gambling, he made a rookie mistake; he fucked up… he believed in me. 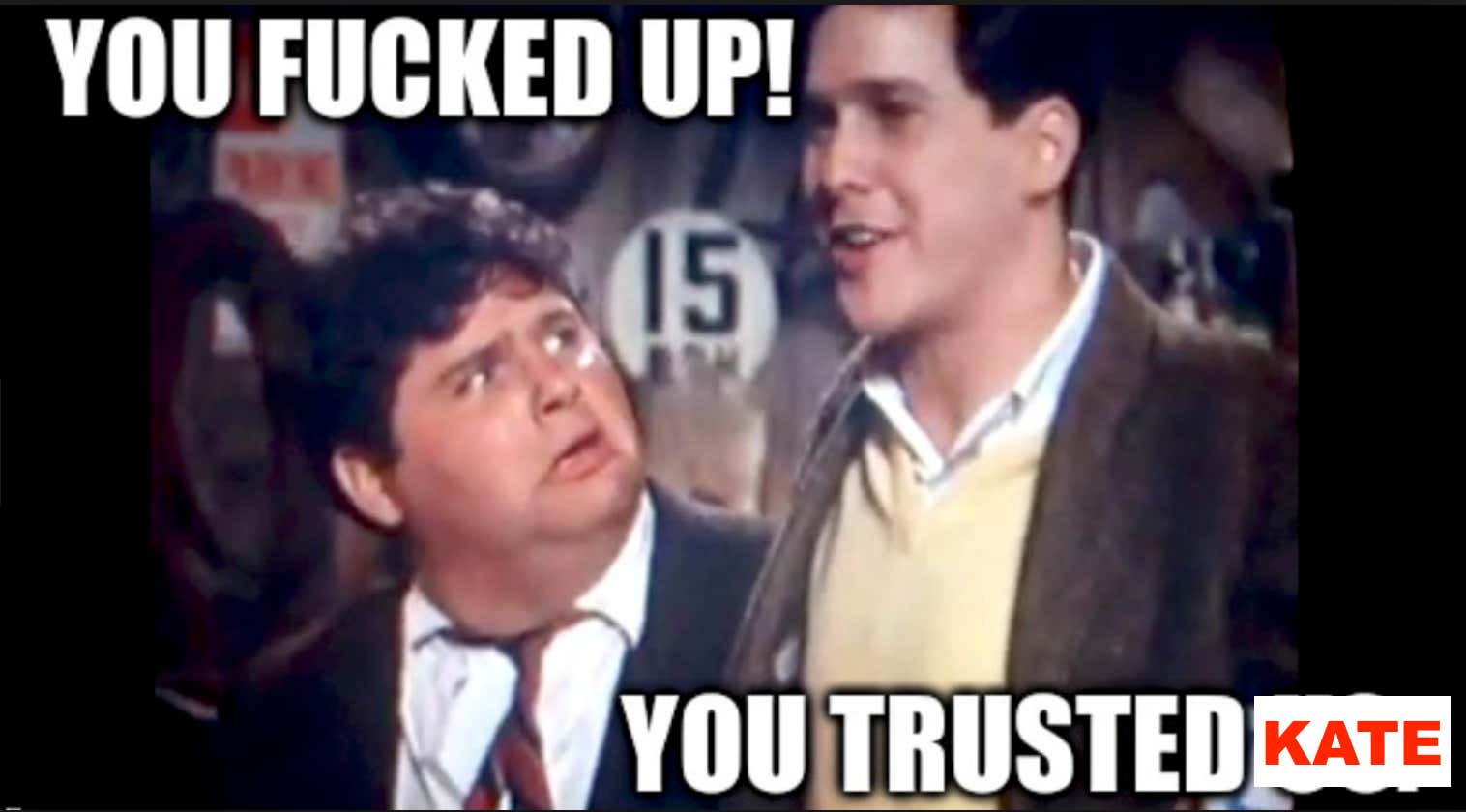 To that end, it does sting a little as a former military member who used to be tough at one point in her life. There was a span where I had buff Madonna arms & a tight stomach, where my calves could have been used for a sculpture, and I could slog it out & take the hits with *no (*only a little) complaint.

You could easily label me a ‘try-hard’, though ‘hardo’ is a title I’ll never achieve.

But that’s ok… What I’ve learned is that dignity-crushing things of that nature are par for the course down at the Big One On The Boulevard, and much like the Super Bowl or Stanley Cup finals or Kentucky Derby, the important thing is that everyone has a good time, which overall I assuredly did. 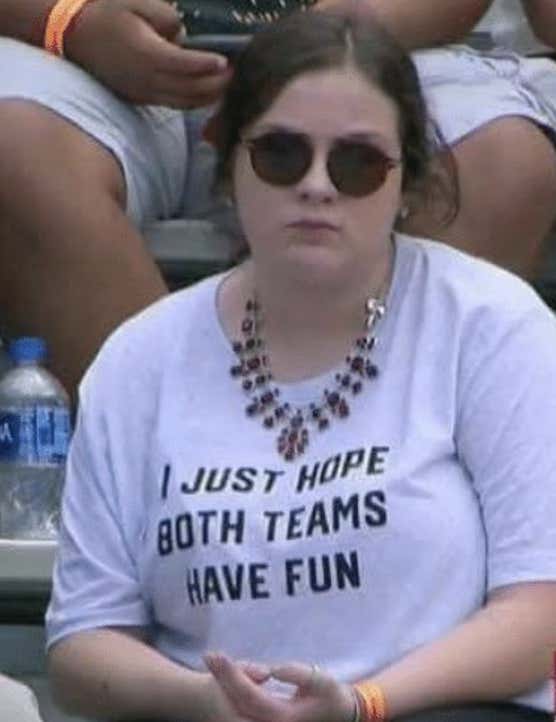 After getting my ass swiftly whooped I loped back to the bus, took a quick shower, and went on a bar crawl down the boulevard. Every few lots there’d be a big homemade bar, stripper poles, very confident people grinding on those poles regardless of the circumstances, stages of all sizes, live bands, and revelers from all over. I wound up staying out late roaming the grounds even though people kept recognizing me as “the loser from the BBQ thing”.

The next day was even better. By 10am I was over at Sugarlands sipping moonshine for breakfast via Maple Bacon Bloody Mary with Mark, Digger & Patti from Discovery’s Moonshiners. Have to say, any sporting event that has an official moonshine is cool with me, and they gave me two full cases of their best ‘shines & flavor mixes to take back to the bus.

After that I took a jar with me on a Pedal Pub & once the lid fell off & rolled under one of the wheels as we cruised the grounds, we decided we had to pass it around & finish it ASAP. Lo & behold as our rowdy group of strangers/new best friends neared the bottom of the jar, I looked up at a tent we were cruising past & there was the RV of the woman who’d kicked my ass. Turns out her name is Carla & she’s a badass who grabbed her Sauce Champ crown, hopped on the Pedal Pub with me (cig dangling from her mouth), & swiftly hopped off to accost Dave for her money when we peddled by the Barstool Bus where he was outside grilling/working on his tan. I was delighted. 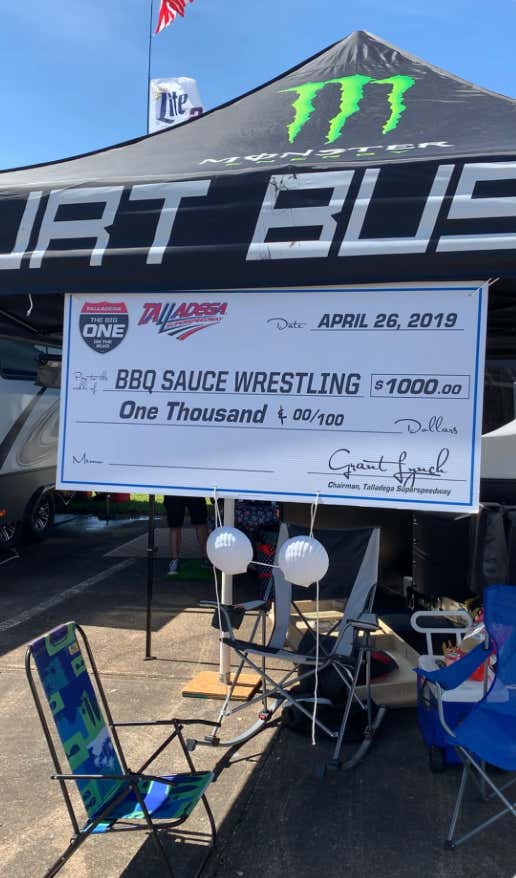 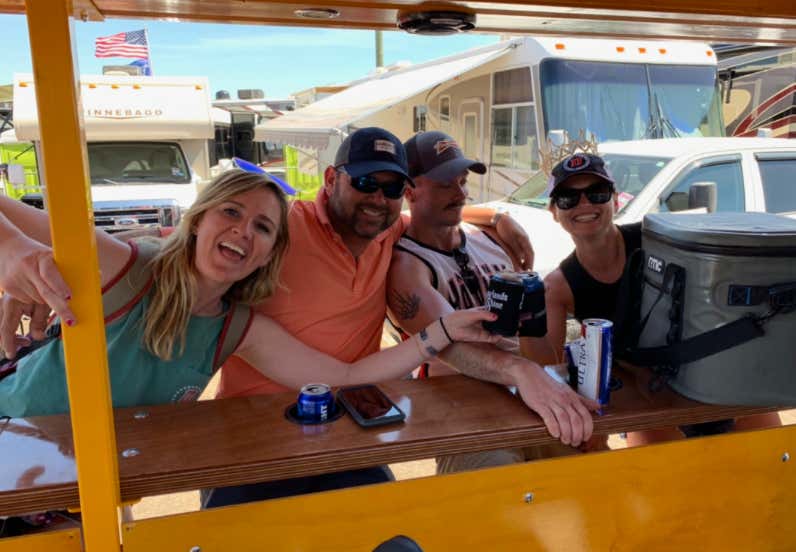 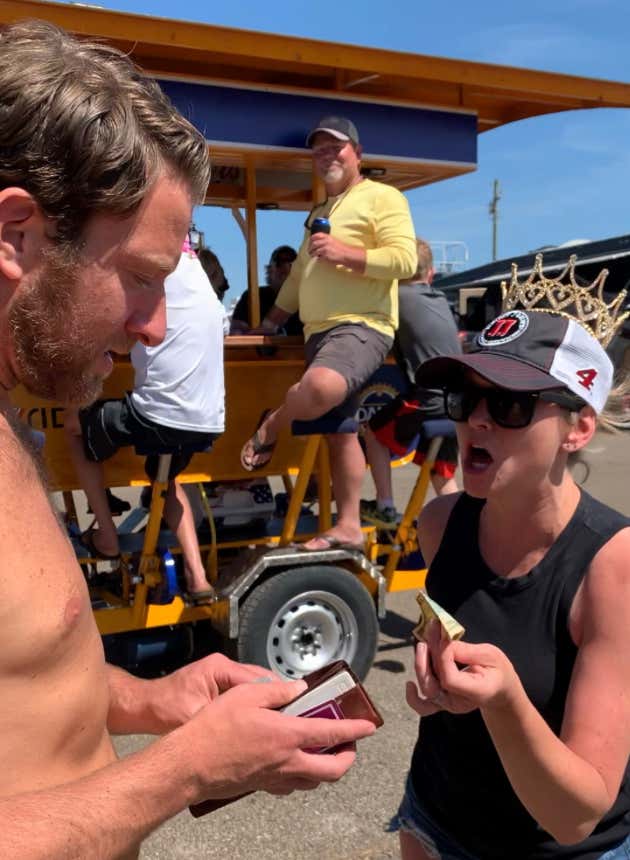 From there I joined Caleb & headed outside the speedway & across the highway to the College Party. We judged a twerk-off that a limber gent named Dave won, officiated a tug-of-war that ended with guys laying on the ground half-heartedly holding the rope with one hand while whole-heartedly gripping their beers with the other, and most importantly, I signed a ton of dude nipples.

After the moonshine & the pedal pub I’m not 100% clear how that nipple thing started, but I know it involves the *official* booster club for Pigeon Forge Wrestling (go Tigers). A group of guys in Pigeon Forge shirts told me they were raising funds for the team and asked if I could spare a few dollars. I didn’t have any cash on me but said I’d rep the team via a shirt trade & we wound up doing the team chant & such, as one does. 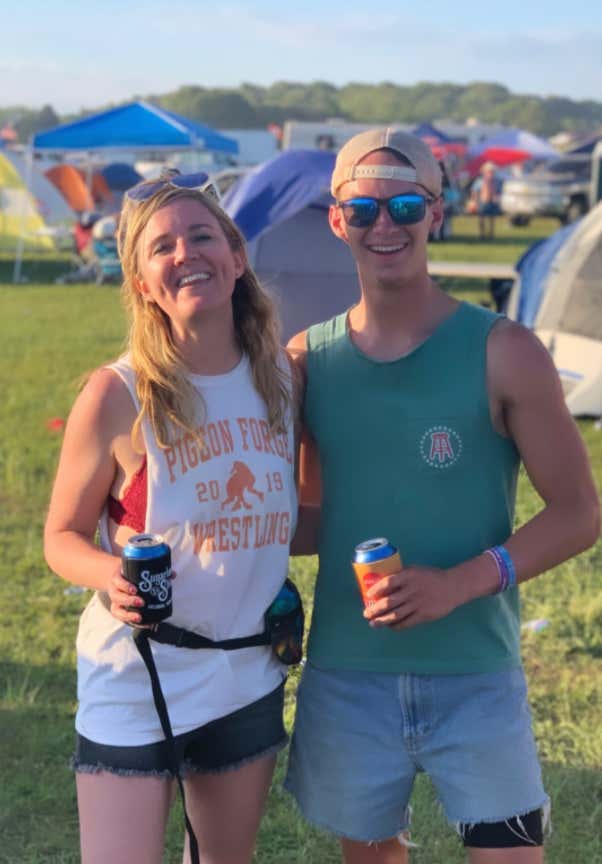 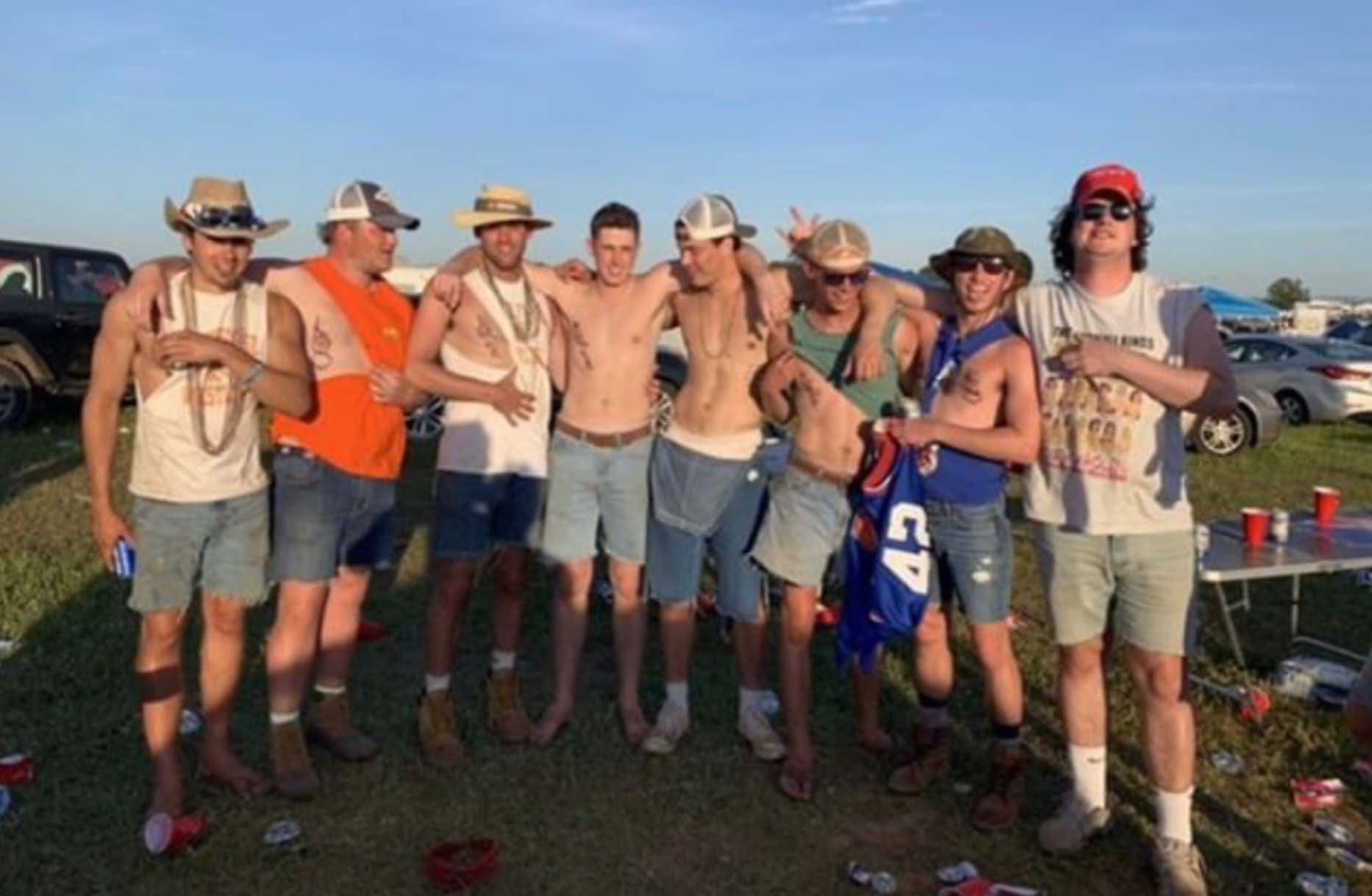 Afterwards they told me they had to come clean, and let me know they’d simply stumbled upon a bunch of Pigeon Forge wrestling shirts, were actually students from Elon University, and the booster club thing had helped them reel in some beer money at a concert a few weeks prior. (They’re hosting a chili cook-off for new singlets this week if anyone is interested.)

Back on The Boulevard at the infield, we grilled out & hit the boulevard again. At one point I was rolling on the ground underneath a laser beam maze, did a shot of Fireball from a huge guy’s belly button, and possibly finessed the pole while whipping my favorite flannel into the crowd. Then I wound up at a dance party until the wee hours of the morning. In hindsight I’m glad the cell phone service at these races is terrible because I tried to post no less than 23 Instagram story videos of myself dancing with a large man rocking a fu-manchu mustache in overalls.

The next morning, Sunday AKA Race Day, we had a meet & greet outside the bus with Stoolies who bought our ticket package. We handed out shirts & hats (and I handed out jars of moonshine & all our beers), and despite my killer hangover I had the best time talking with fans of Barstool. There was an awesome couple from Michigan who invited me to guest bartend at the their bar (shout out Kozy Lounge, I’ll get there someday!), a group of guys from Florida with picture-perfect mullets, and a local squad with a sweet sound system pulled via beer wagon. Getting the time to chat people up is always a highlight of any trip for me & it’s those moments where I can’t believe this gets to be my job.

To close it out we headed over to the track & as Dave hopped in a big rig, Caleb & I hung out in the pits as the racers got ready. Each time I find my jaw hitting the ground at the skill of the pit crews, the calm of the drivers before they climb in the cars, the heel-height & perfect hair of the wives down on the asphalt, & the enthusiasm of the fans, some of whom have been there all week waiting for this moment.

For the drivers on Talladega’s track going 200+MPH with packed stands & other cars roaring around them, race weekend can seem like a blur. Though I was at a slightly different pace, I’d have to say the same for my own experience there. If you’ve never been to a NASCAR race, I assure you you’ll love getting lost in the sauce. 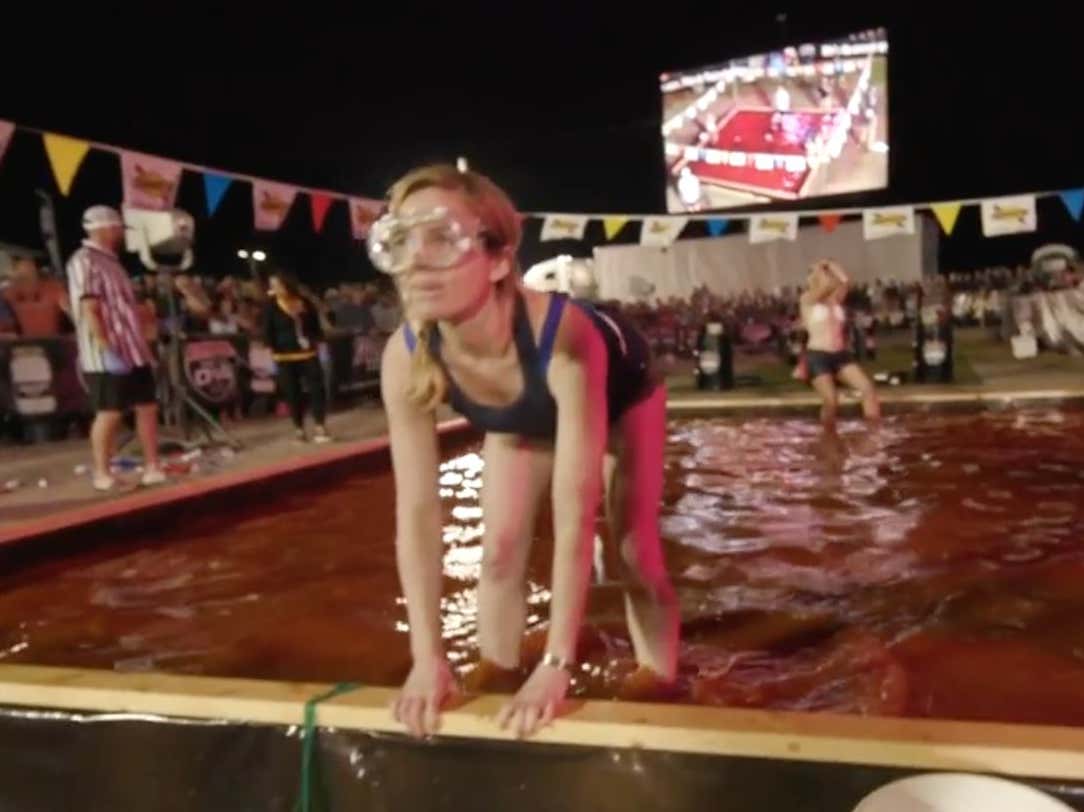 Heads up, Chaps, Cons & I will be at the race in Charlotte over Memorial Day Weekend. Details to come!