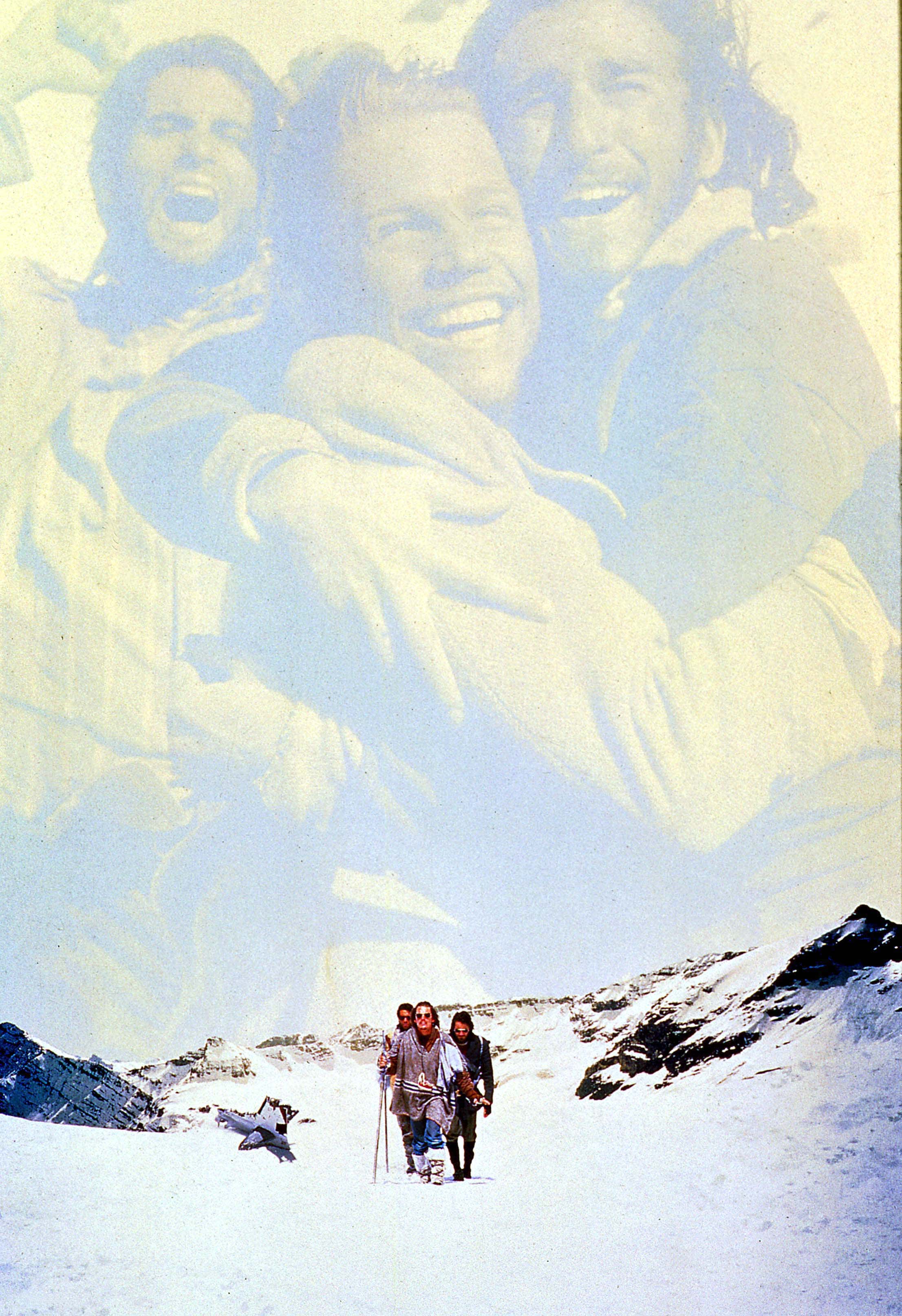 Yellowjackets came out last year on Showtime and was a big hit both with fans and critics. It's a really good show that I'm not sure would exist if it wasn't for Alive or the true story behind it of the 1972 plane crash in the Andes that forced a rugby team to resort to cannibalism just to stay alive. It feels like Alive is one of the more forgotten about movies on this list yet it tells a story that is still influential today.

Based on a 1974 book "Alive: The Story of the Andes Survivors", what these people went through is almost unfathomable. Roger Ebert said in his review of the movie that "There are some stories you can't tell. The story of the Andes survivors may be one of them." I disagree. I think this is a story that is told very well and with the passage of time and the longer we get away from the actual events, the movie becomes stronger. I think for Ebert and people who lived through hearing about this story and may have read the book, the movie is going to leave out details that may be important to them. But when you are watching this without any knowledge beforehand, it's an impactful and well crafted film.

The director Frank Marshall is someone that is best known for being one of the greatest producers of the last 40 years. Marshall has been nominated for five Oscars and produced Raiders of the Lost Ark, The Sixth Sense, Back to the Future and Poltergeist among others. However, he's only directed four feature films and while I enjoyed Arachnophobia and Eight Below and I must admit that Congo is trashy fun, Alive is his best movie. 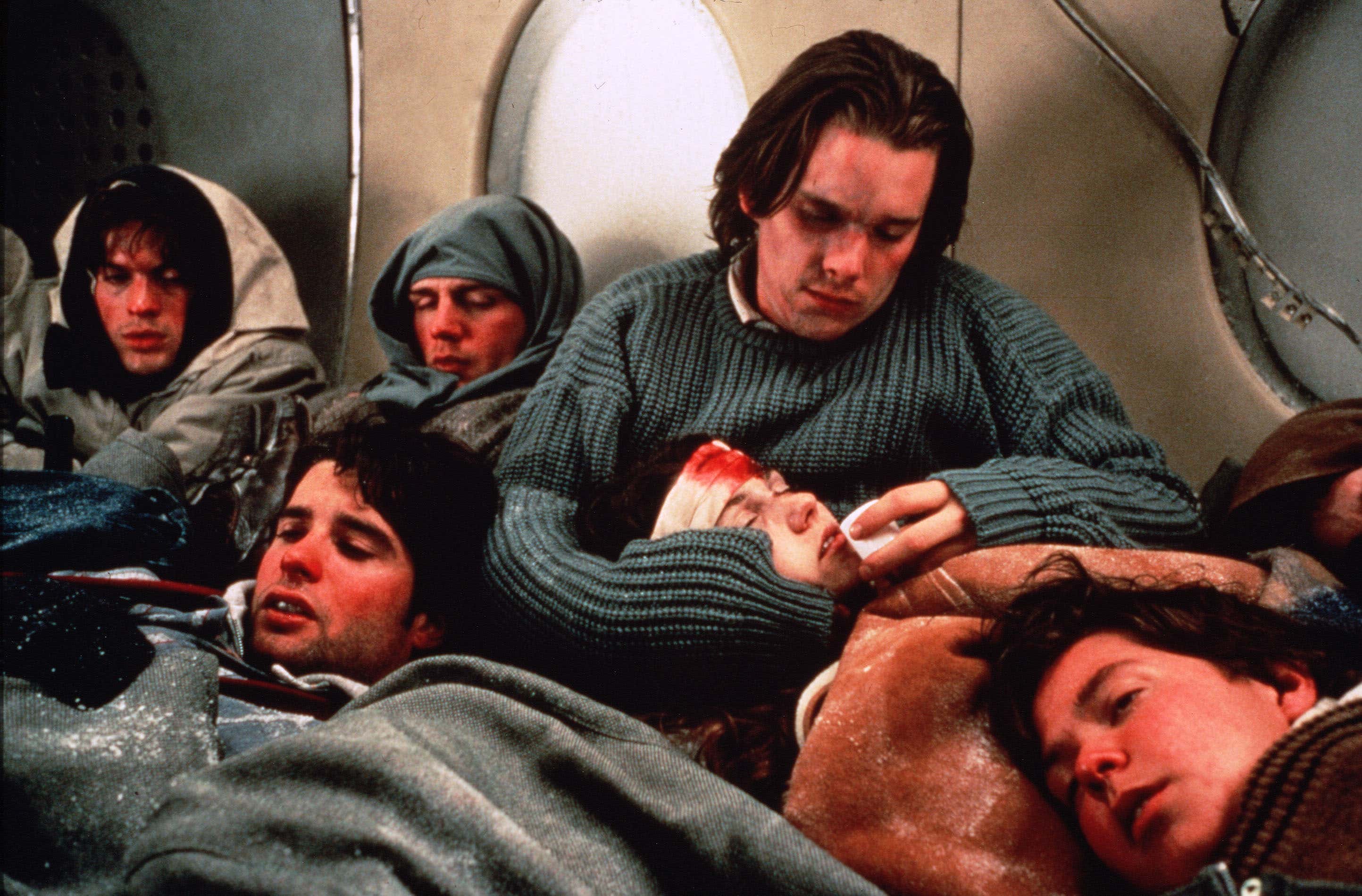 This was shot in the Canadian Rockies and the cinematography is fantastic in this movie. The shots of the mountains are stunning and yet Marshall has the confidence in them to treat the surroundings as the prison for these characters as opposed to overwhelming us with nature shots. It's not until people leave the crash site does Marshall really utilize the amazing surroundings.

It also boasts a very strong cast. This is the last movie Ethan Hawke made before doing Realty Bites and becoming a Gen X poster boy. Audiences who saw Alive at the time would have known him from Explorers, Dead Poets Society and White Fang. Hawke is one of my favorite actors of his generation. He's the rare actor that can be in any genre of movie and make it work. When it comes to picking projects to do, he is pretty fearless. But as Nando in Alive, he's playing a heroic role. Nando is the strongest and bravest survivor and rarely makes a bad move. Some other roles have some more complexity to them so he doesn't give my favorite performance in the movie.

Josh Hamilton is fantastic as Canessa who is the voice of reason among the survivors. He is also strong and brave but more cautious than Nando. He doesn't want to leave the crash site until winter is over. He also doesn't ration food properly. He makes some missteps but he is a good person doing his absolute best in a horrible circumstance. That is a much more interesting character to watch. Hamilton has remained working regularly since Alive but his career has had a renaissance the last few years as he's recently been in Manchester By The Sea, The Walking Dead and got some critical buzz for Eighth Grade.

The rest of the cast is strong as well and has some very good character actors like Illeana Douglas, Vincent Spano, Micheal DeLorenzo and even an uncredited John Malkovitch are all impressive and believable. If this cast doesn't work and we don't believe that they are horrified at the prospect of cannibalism, this movie can end up mocking what it is trying to honor very quickly.

Until Cast Away, the plane crash sequence in Alive was one of the most terrifying on film. I also wonder if Cast Away also cornered the block on plane crash/survivor movies or at least took it from Alive. Before Cast Away came out, I feel like Alive was in the zeitgeist so much more. Now? This is the first film I've done for this countdown that hasn't been ranked on movierankings.net and they've covered a ton of movies there. Cast Away is a better movie but Alive is a true story and shouldn't be forgotten. You may see elements of their story in other things today but the tale of these survivors really does show what he human spirit can endure. If you enjoy Yellowjackets, Alive is definitely worth seeing.

92. Die Hard With A Vengeance