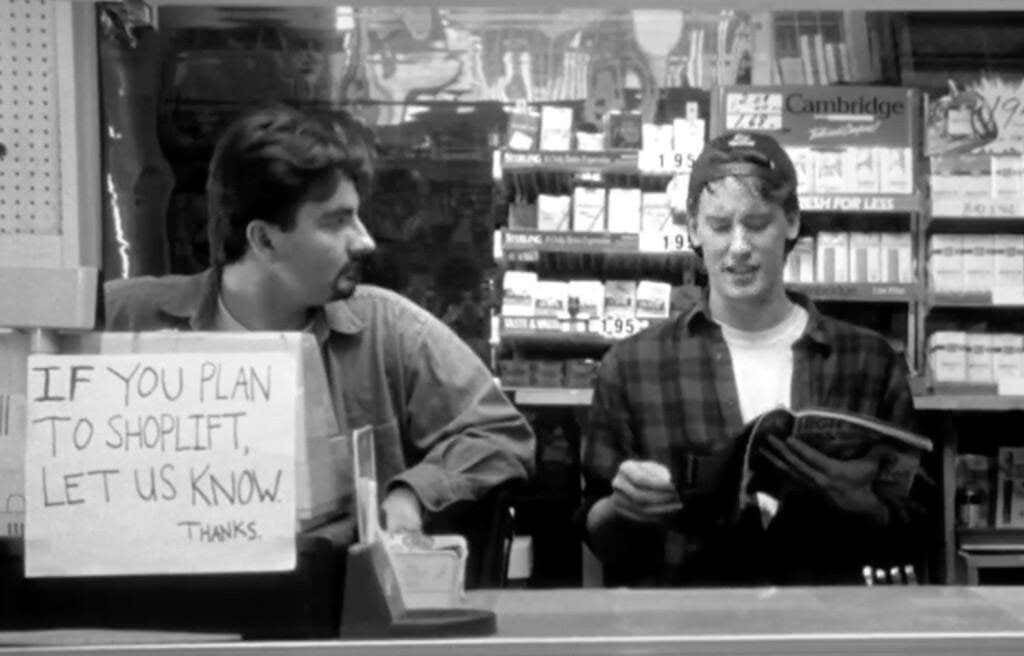 The 1970’s might be the most important decade in movie history but the 1990’s are my favorite. Between the major studios making interesting and different blockbusters and the independent ones doing wildly creative things, each year of the 1990’s has some of my favorite movies.

Each Friday, I’ll share a new movie off my Top 100 list. I’ll include where each movie is streaming so if you’re looking for something to watch that weekend, you can watch along with the list.

No director meant more to me in the 90’s that means less to me now than Kevin Smith. Movies like Clerks, Mallrats, Dogma and Chasing Amy really spoke to me when I was a teenager and in my early 20’s. Those movies feel vapid and shabby when I watch them now.

What makes Clerks different? It has the most heart and the most authentic characters. Even though Brian O’Halloran (as Dante) and Jeff Anderson (as Randall) are the most inexperienced leads in any Kevin Smith movie, they give the most believable performances and are the ones I care about the most. By far.

O’Halloran is especially effective and pulls off the tough task of being incredibly whiny (“I’m not even supposed to be here today!”) but also someone you really root for. It also helps that we’ve all had shitty jobs and never wanted to be there. From the bad attitude to the feeling of obligation, it’s entirely relatable.

Famously made for $27,000, the movie often feels like it. The edits are rough and some of the background actors are very weak. It’s also shot in black and white but all of that grittiness makes this feel more lived in and to some extent, exciting. In a movie this cheaply made, anything feels like it can happen even though you know that you, like Dante, will never leave the Quick Stop Grocery for very long.

Clerks shares a sensibility of Seinfeld where both are "about nothing" but in fact, many things happen to the characters and the small world they inhabit. People die, relationships end and wakes are attended (and ruined) but because Clerks puts the same amount of importance on those events as they do when Randall goes to a better video rental store, everything feels somewhat trivial and fun.

The original ending had Dante get killed at the end of the movie and while I love tonal changes, it's just too abrupt and almost cruel. There is nothing funny about the sequence he gets shot and O'Halloran is so good as Dante, we don't want to see him get hurt. Smith made the right call pulling this unnecessary ending after the first screening.

This is the peak of Smith’s talents which is frustrating to think about because Clerks shows so much promise. His next film was Mallrats and that leaned too heavily into being funny at the expense of the characters. It didn't help some more established actors like Jeremy London and Shannen Doherty had trouble making Smith's dialogue sound natural. With Dogma, it was the philosophy that took not just center stage but the whole theater. Things like plot and characters were ignored in the process. Chasing Amy is his best movie (outside the Clerks universe) but that script always felt like it was constantly nudging you and reminding you how clever it was.

After that, it seemed that Smith aged out of the audience he was trying to appeal to. Also, the weaknesses of his filmmaking became clearer as he got larger budgets. The only difference is Clerks 2 where everything feels comfortable and natural. There is a Clerks 3 coming out in September but it is only going to be in theaters for two days (put out by limited release film distributor Fathom Events) which I really don’t understand. Smith made Clerks 2 for only $5 million and it made $25 million. For all of Smith’s problems, he can make films cheaply and I find it hard to believe there isn’t enough of an audience for Clerks 3 to generate at least $10 million if it got a wide release.

Perhaps instead of wondering what Kevin Smith could have been, it’s time to appreciate what he did do and while Clerks may not be as enjoyable to watch as it was when I was a teenager, it’s still a very entertaining movie with a premise that holds up and characters that I still care about.