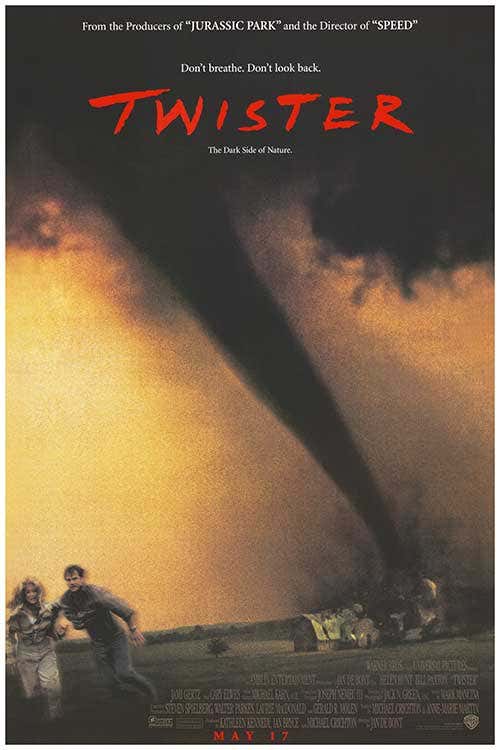 Unapologetically stupid, what Twister lacks in intelligence, it makes up for in sheer entertainment. Mix in a cast with two future Oscar winners and a director who could a frame an action shot in a movie better than anyone and you have a goofy disaster movie that is far better than it deserves to be.

Re-watching Twister, I was struck by how well the action sequences hold up and how many there are. The effects hold up really well 25 years later and it's not a surprise that this was nominated for an Oscar for Best Visual Effects (it did lose to Independence Day). Once you get the first act out of the way, the movie is a relentless charge against inclement weather. It sounds ridiculous but it's very effective and exciting.

The movie clumsily has us meet the cast using Jami Gertz's character as an exposition device. It's just lazy screenwriting by Michael Crichton and Anne-Marie Martin who were paid a then-record $2.5 million to write the screenplay. Crichton was at his Hollywood peak having co-written Jurassic Park and created the TV show ER just in the past few years. Twister would end up being the 2nd biggest moneymaker to come out in 1996 (once again behind Independence Day) so Crichton would have another hit on his hands. However, this would be the last time he'd have direct involvement with a major movie or television success. Crichton passed away in 2008.

This was also the last hit for Jan de Bont. De Bont was one of the best action film cinematographers throughout the 1980's working on Die Hard, Cujo, Jewel of the Nile and The Hunt for Red October. He finally got his chance to direct in 1994 with Speed which did very well with both critics and audiences. Twister was his next film but that ended the hit parade for de Bont. He would direct three more films and than retire from directing insisiting that increased studio involvement made it too difficult to make movies. On his last film, which was a Tomb Raider sequel with Angelina Jolie, producers decreased the budget $12 million on the first day of shooting forcing de Bont to take out multiple scenes.

I'm sure dealing with budget headaches are not fun but I wonder if there were other reasons for de Bont to stop making films. His movies after Twister were Speed 2: Cruise Control, The Haunting and that Tomb Raider sequel. The quality of his movies dropped off so substantially after Twister, I have to believe that played a role in him walking away.

Bill Paxton and Helen Hunt are both really good in this movie. Both elevate the film by taking it seriously even if the scenarios around them are ridiculous. Paxton has an especially thankless role having to not come off as a total asshole despite ditching his fiancée in the middle of a major weather crisis. Hunt makes us believe that her character is obsessed with tornados and you can see the fear and awe in her face when they get close to them.

It sounds like this shoot was a nightmare. Both Paxton and Hunt had their retinas burned and were temporarily blinded when the crew used lamps that were far too bright. Hunt reportedly got a concussion from hitting her head on a bridge beam in the scene where her and Paxton are trapped when they encounter the first tornado of the day. Despite these difficulties, de Bont should get some credit for insisting the movie be shot on location in Oklahoma. The setting makes all of this feel so much more real because we haven't seen these places on film before.

This was the first time I had seen Philip Seymour Hoffman on screen. I saw this in the theaters when it came out in 1996 and I thought he was very good but it wasn't until I saw him in Boogie Nights a couple years later that I understood how talented he was. He elevates both roles in such different ways. As portrayed by Hoffman, Dusty is such an unusual character. He's eccentric but also a "bro" mixed with this nerdy weather fixation. It's a pretty rich commitment to a kind of role we've seen in action movies before but never quite played this way. The supporting cast has a number of talented people like Todd Field (who directed In The Bedroom and Little Children), Cary Elwes (The Princess Bride), Jeremy Davies (playing a slightly less cowardly person than he would in Saving Private Ryan) and Alan Ruck (Ferris Bueller's Day Off, Succession).

Twister holds up really well. The nice thing about making a movie that deals with bad weather is that it's an eternal bad guy. Include a unique setting, a strong cast, special effects that haven't aged terribly, some genuinely effective and thrilling sequences and you wind up with something that's still a fun popcorn movie 25 years later.