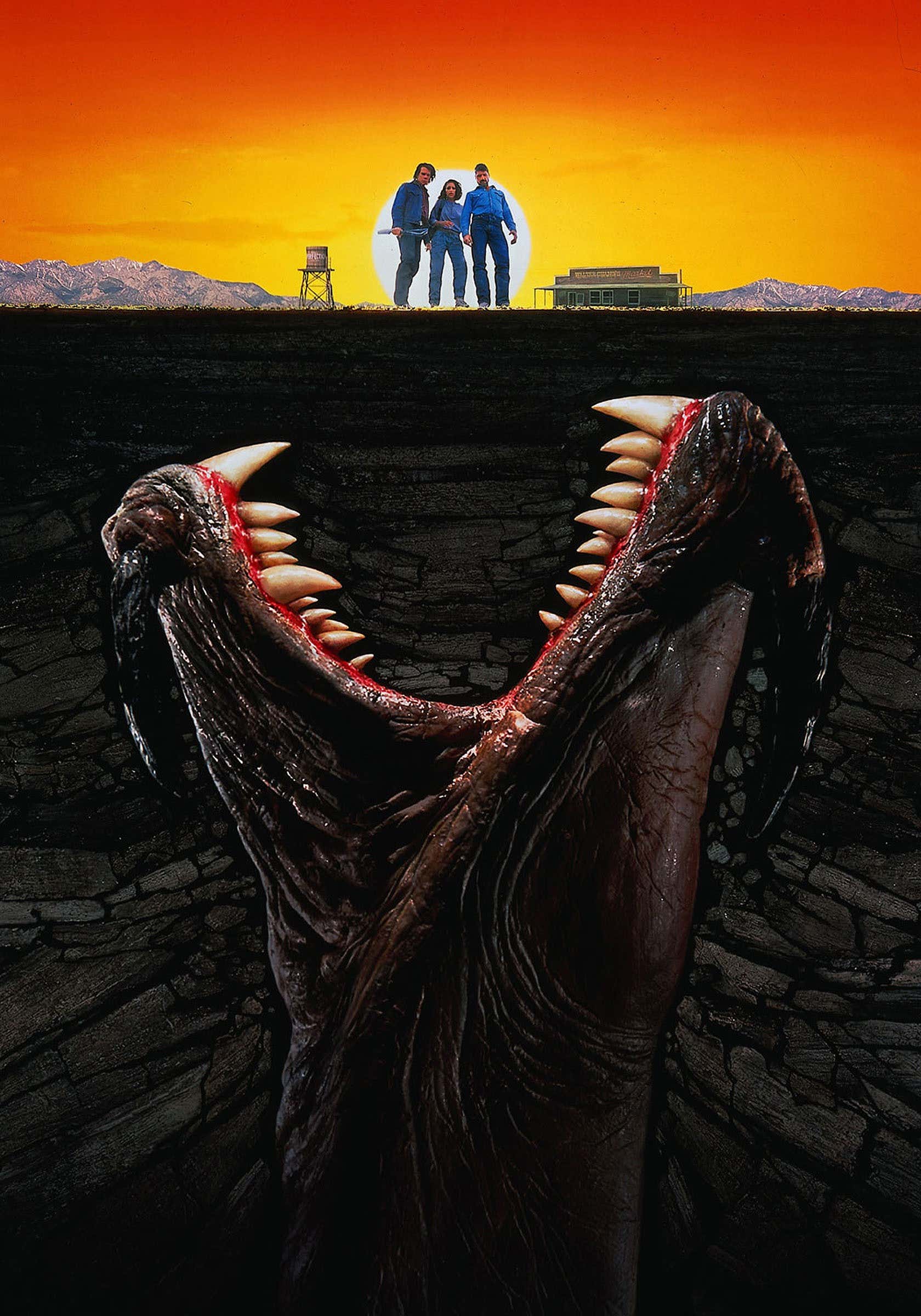 As overstuffed as Any Given Sunday was, Tremors is simple. Borrowing but also improving on 1950's monster movies, Tremors focuses on a great premise, fun leading characters and a wide open setting. It's a movie that is quietly confident in itself and it transports you to Perfection, Nevada with Kevin Bacon and Fred Ward and all you care about is killing these fucking sandworms.

Released on January 19, 1990, it's only the 4th movie to come out in the 1990's. Internal Affairs, Texas Chainsaw Massacre 3 and Ski Patrol were all released the week before. None of those movies will crack the list so this will be the oldest movie discussed. To further contrast Any Given Sunday and Tremors, the Oliver Stone movie came out on Christmas Eve 1999. That's probably enough weird and pointless date information for this review.

Initially, this was supposed to be rated R until they removed some of the "fucks" in the movie (if you say fuck more than once in a movie, it's an automatic R). It's tough to find a scarier PG-13 movie than Tremors. Gremlins (which is only PG) has that great kitchen sequence and The Sixth Sense has more scares than it gets credit for but most of Tremors first two acts are built around fear and discovery of these sandworms. We never find out where they are from, why they are there or even what they should be called but I think that's a strength of the movie and makes the situation feel more real. If you were there with those characters, you wouldn't have that knowledge either. You'd be focused on killing them and not trying to discover some backstory. The original Predator is a very good movie but I never liked that opening shot of seeing the spaceship crash down to Earth. We don't need to know the Predator is an alien to be scared of him.

So much of this movie rides on us believing and liking the Kevin Bacon and Fred Ward characters. Both jump right in and this was a turning point in the career of Bacon. He was the star of this movie and his name was highlighted in the movie poster and he's the first actor in the credits. But after Tremors, he spent much of the decade doing character acting and was incredibly successful at it especially in movies like A Few Good Men, Apollo 13 and Sleepers. It's when he tried to go back to being the lead, he stumbled and we ended up with He Said, She Said and The Air Up There.

Bacon's career hasn't been the same since he lost a lot of money in the Bernie Madoff scandal. He did a television show on FOX right after that called The Following for a couple seasons and is now on City On A Hill on Showtime. He's only been in three movies since 2017. He might have been the best character actor in movies in the 1990's and I thought that's a lane he could do successfully in film until he was very old. Hopefully he goes back to doing that soon. He's one of the greatest actors to never get nominated for an Oscar.

The final act of Tremors shifts from horror to action. I did enjoy the horror sequences more (the scene with the doctor and his wife in the station wagon is fantastic), but it's still a strong ending and a credit to that goes to Michael Gross. If you grew up in the 1980's, you remember Gross as the kind Dad on Family Ties who worked at PBS. Here, Gross has his hair slicked back and he's a cigar-chomping doomsday prepper named Burt who loves guns. What I like about how Gross plays Burt is he never plays him as an idiot or crazy. There is a reason why Burt does what he does and often times, it saves the group. So often in modern movies, if you see a gun nut in a movie they are instantly bad or insane. There is no nuance and it plays into politics. When we attach cliches to characters, it weakens a story. This goes for both sides of the aisle. Just because someone is a liberal, that doesn't mean they are weak or soft. People are complex and we should see that in stories. Having the Burt character not be one note elevates Tremors.

Tremors has spent the last 30 years becoming a straight to video franchise as there have now been six sequels. All of them star Gross as Burt. In the second one, Fred Ward did come back to reprise his role and that did get a small release in theaters but after that, the franchise has had Jamie Kennedy and Jon Heder star in these along side Gross. They keep making these so there must still be some money in the adventures of Burt and the sandworms.

This was directed by Ron Underwood, who also helped develop the story. Underwood does a nice job here. He embraces the simplicity and is quite skilled using the natural landscape to make you feel like you really are somewhere different. He does with his next movie City Slickers as well. He never had a hit again after that. He would up directing two box-office disasters in Mighty Joe Young and The Adventures of Pluto Nash and Underwood quickly became a television director. He's been working very consistently and is still working today directing episodes of Fear The Walking Dead that came out this year.

While I do like Tremors quite a bit, it has some flaws. Some performances are pretty weak beyond Bacon, Ward and Gross. More character development would have helped with all the people we meet. But this is a very entertaining movie and perfect to throw on at home late at night while drinking a cold beer (or cider) while you eat some popcorn. It's just fun hanging out with Kevin Bacon and Fred Ward while they kill some sandworms. Sometimes, that can simply be enough.