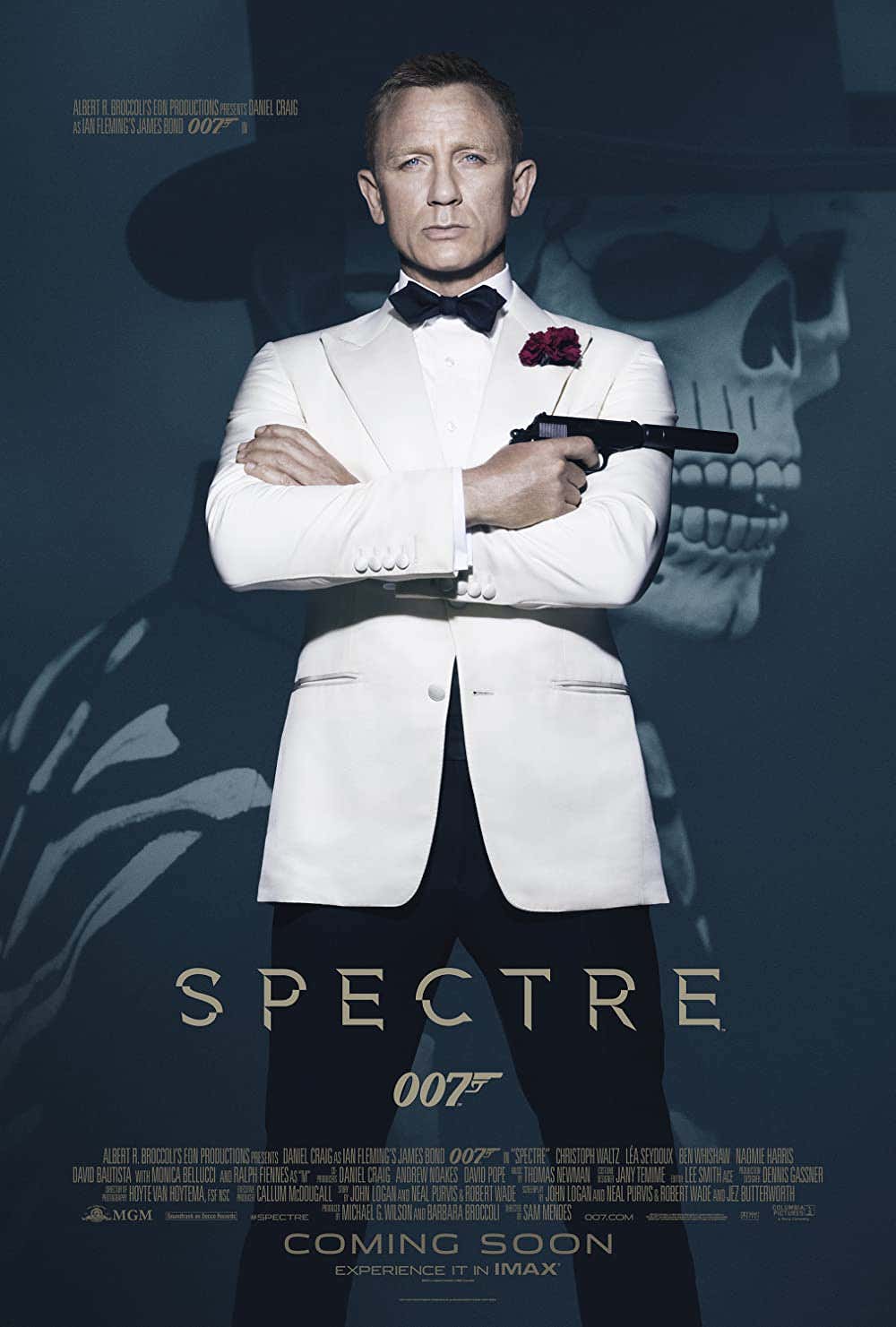 With only a few days left until "No Time To Die," it's time to wrap up my recap of the Daniel Craig Bond films with the 2015 hit "Spectre." If you want to know my thoughts on the previous installments, check them out here, here, and here

I genuinely could not wait to see "Spectre." The ending to "Skyfall" had me so amped for the next installment of the Bond franchise. Sam Mendes, who did such a magnificent job with the previous film, was returning to direct. And two-time Academy Award winner Christoph Waltz was set to play the villain. I figured there was no possible way this movie would disappoint.

"Spectre" is not a complete disaster of a movie. There are things about it that I appreciate. Most of them have to do a Sam Mendes' direction. I love the opening action sequence of this film. I think it's immersive, and the movie begins with a continuous one-shot that takes your breath away. Sam Mendes' 2019 masterpiece "1917" used that continuous one-shot aesthetic brilliantly. This opinion might not be a popular one, but I enjoy the theme song by Sam Smith and the opening credits sequence that accompanies it.

None of these performances are inadequate. Craig is as intense as ever. Ben Whishaw is given a more significant part in this, and he's a lot of fun. Whishaw is one of the only supporting characters given something interesting to do. Christoph Waltz is one of my favorite actors, and while I feel he's underused, his performance is still outstanding. The only time the film feels like it has any momentum is when Waltz is at the forefront. This is the result of hiring an actor with such natural charisma. I like the idea that there has been someone behind the scenes, pulling the strings and trying to get Bond to unravel. Bond is a guy who has a ton of blood on his hands, and it was neat that this film deals with the repercussions of being a killer. I wouldn't say I liked the execution, but the foundation was strong.

Okay, I've said what I've enjoyed. Now let me sink my teeth into what I don't like. I think this movie is a genuinely bad film. I was not too fond of it when I saw it the first time, and my negative sentiments toward it have been reaffirmed several years later. "Spectre" suffers from the biggest problem that any movie can suffer from, and that's that it is boring. The story, characters, and action are all incredibly dull, especially for a Bond film. This film is only about five minutes longer than Skyfall was, and yet it feels substantially lengthier. The MI5 vs. MI6 subplot with Ralph Fiennes and Andrew Scott's characters is one of the least interesting I've ever seen. I realize that this series has done all they can to bring Bond into the 21st century, but debating the merits of field agents vs. drones is something I've never had any interest in seeing in a Bond film.

I always appreciated this series because it fully acknowledges that James Bond is a broken man and a complete sociopath. Despite the character flaws, Craig's portrayal has always allowed Bond to remain somewhat amiable. There's only so much an audience can take, though. In this, he's a genuine creep. The sequence in which he seduces and ends up having sex with a woman about 20 minutes after her husband's funeral (a husband who Bond murdered, by the way) is genuinely uncomfortable.

The way this film wastes its incredibly talented supporting cast is entirely indefensible. One of my favorite things about "Skyfall" was how good the supporting cast was. Naomi Harris was so much fun as Moneypenny in the previous movie. In "Spectre," she's a fucking secretary. In previous films, it always felt like Daniel Craig and his female counterparts had great chemistry. Here, that is not the case. Léa Seydoux is a very talented actress, but she and Daniel Craig's back-and-forth is not nearly as engaging as I hoped it would be. It leaves me concerned about what "No Time To Die" will look like considering she's coming back.

The thing I was most excited about in this movie was seeing Christoph Waltz play the villain. How could they mess that up? Well, for one, he's barely in this movie. In the first act, he's shown in shadow, but he doesn't have a scene of actual substance until an hour and forty-two minutes into this movie. That is screenplay malpractice, in my opinion. In fairness, when he does show up, he's excellent, which is no surprise. Christoph Waltz is always great, but man, are his talents wasted in this. Also, the childhood connection they make between Blofeld and Bond is…god it's just so stupid. I can't put it more bluntly than that.

I've barely even scraped the surface of the things I don't like about this movie. I could go on and on about the endless amount of logistical errors that occur throughout this movie (Blofeld's final elaborate scheme makes no sense). Still, I'm not going to do that because I feel like the issues with this film run much deeper than that. I'm stunned by how bad this movie is. I'm stunned that this many talented people ended up making a product that is so remarkably underwhelming. This movie has its defenders, and I'm jealous of the people who like it. To me, this movie commits the one fatal flaw that a sequel should not commit, and that's that, in some ways, it diminishes the impact of the previous films. I hope that "No Time To Die" finds a way to redeem Daniel Craig's arc as James Bond. He's given such an outstanding performance as this character, and while the script has occasionally bogged him down, I've once not believed him. At its height, this series has given us some of the best action films of the last 20 years. With that said, I could do without "Spectre."