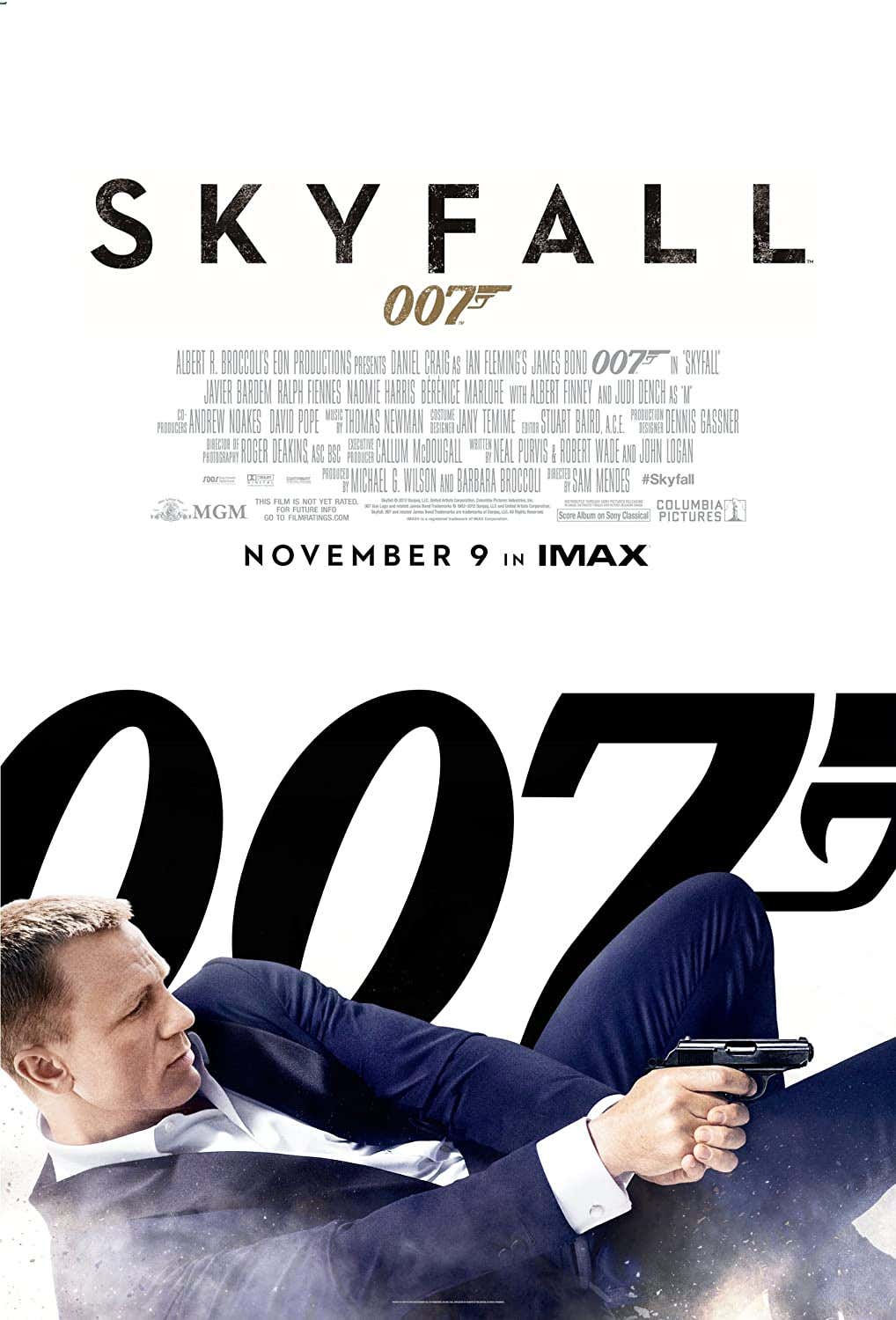 The trek towards "No Time To Die" continues today as we recap the Daniel Craig Bond films by talking about the third and most financially successful of the bunch, the 2012 Sam Mendes directed "Skyfall."

"Skyfall" is by no means a perfect movie, but several things about it are flawless. Right away, I can't overstate how gorgeous this movie looks. The cinematographer who received an Academy Award nomination for this movie, Roger Deakins, is perhaps the finest in film history. He recently won an Academy Award for his work "1917," ironically directed by Sam Mendes, the same man who directed "Skyfall." This film is a technical marvel. Roger Deakins' cinematography coupled with Sam Mendes (who I still feel like is underappreciated) and his marvelous direction are a big reason for that.

Outside of Judi Dench as M, I feel like one of the things that bogged down "Quantum Of Solace" was that it never felt like Daniel Craig had a whole lot to work off. Olga Kurylenko's character of Camille was interesting, and while I found their back and forth intriguing, her character lacked the charisma that other supporting Bond characters have had. In this film, that's not an issue. Naomi Harris is so, so great as Moneypenny. Ben Whishaw is an excellent addition to the series as Q. The scene of him and Bond meeting for the first time is one of my favorites in the entire series. Then you have Javier Bardem as Silva. Bardem is one of our finest actors living actors, and in this, he is mesmerizing. The "villain problem" that plagued "Quantum Of Solace" is nonexistent here as Bond faces off against of his most formidable and charismatic villains. Quite frankly, I wish Bardem would've had a more significant part.

I stated in my last blog that one of the big things that bothered me about "Quantum Of Solace" was that it rarely ever felt like a James Bond movie. That film had a lame theme song, a weak villain, no real gadgets, and few cool cars. It felt like watching a Batman movie where Batman goes around and murders people (which we've seen already several times on the big screen for reasons that are totally beyond me). In "Skyfall," it felt like the filmmakers found a delicate balance. The gadgets are outlandish but never silly. The theme song by Adele is not just one of the best Bond themes ever, but one of the best pop ballads of the last decade, and as I already stated, the villain is one of the series' very best.

I like this film a whole lot. But it is not without its flaws. One issue I've always had with it is that it's pretty derivative of my favorite film, Christopher Nolan's "The Dark Knight." The villain, who is essentially the mirror image of the hero, intentionally gets himself caught so he can escape and continue to murder people. The "Getting caught on purpose" cliché was so popular in the early to mid-2010s after "The Dark Knight" came out, but this one is one of the more blatant offenders.

I only saw this movie once, and that was when it was released in theaters on a Saturday in 2012 following Michigan's overtime defeat of Northwestern at The Big House. That part of the story is irrelevant, but I figured I would bring it up just for the sake of context and my ridiculous memory. I liked it when I first saw it but the one issue I always had with it was that I remember coming out of it feeling a little empty. Nine years later, while I still have some problems, I'm not nearly as unfavorable. The last act of this film is ridiculous. I'm willing to suspend a lot of disbelief with a movie like this. But even within the parameters of the world they've created, the third act is tough to swallow. It essentially becomes home alone with Daniel Craig and two 80-year-old people rigging booby traps around Bond's old home. In fairness, it's better executed than it probably has any right to be. I think Sam Mendes' impeccable direction is a big reason for that. As underwhelming as I found the final action sequence, The last 5 to 10 minutes wins you back with an emotional punch and some genuine surprises on the way.

I love watching this movie while I'm watching it, but each time I've seen it, I've ended up liking it less the further away I get from it. It's an excellent viewing experience, but it doesn't stick with you like "Casino Royale" did. Overall, "Skyfall" is still a slick movie. It's well shot, it's well-directed, it's well-acted, and it's well-paced. You could make the argument that it's a perfect Bond movie. I still heavily prefer "Casino Royale" over this because I think "Casino Royale" did a much better job of delving into the psyche of James Bond better than any movie in the franchise has. However, this one is still an absolute blast. It's easily one of the better action films of the 2010s.

See you next time for "Spectre"