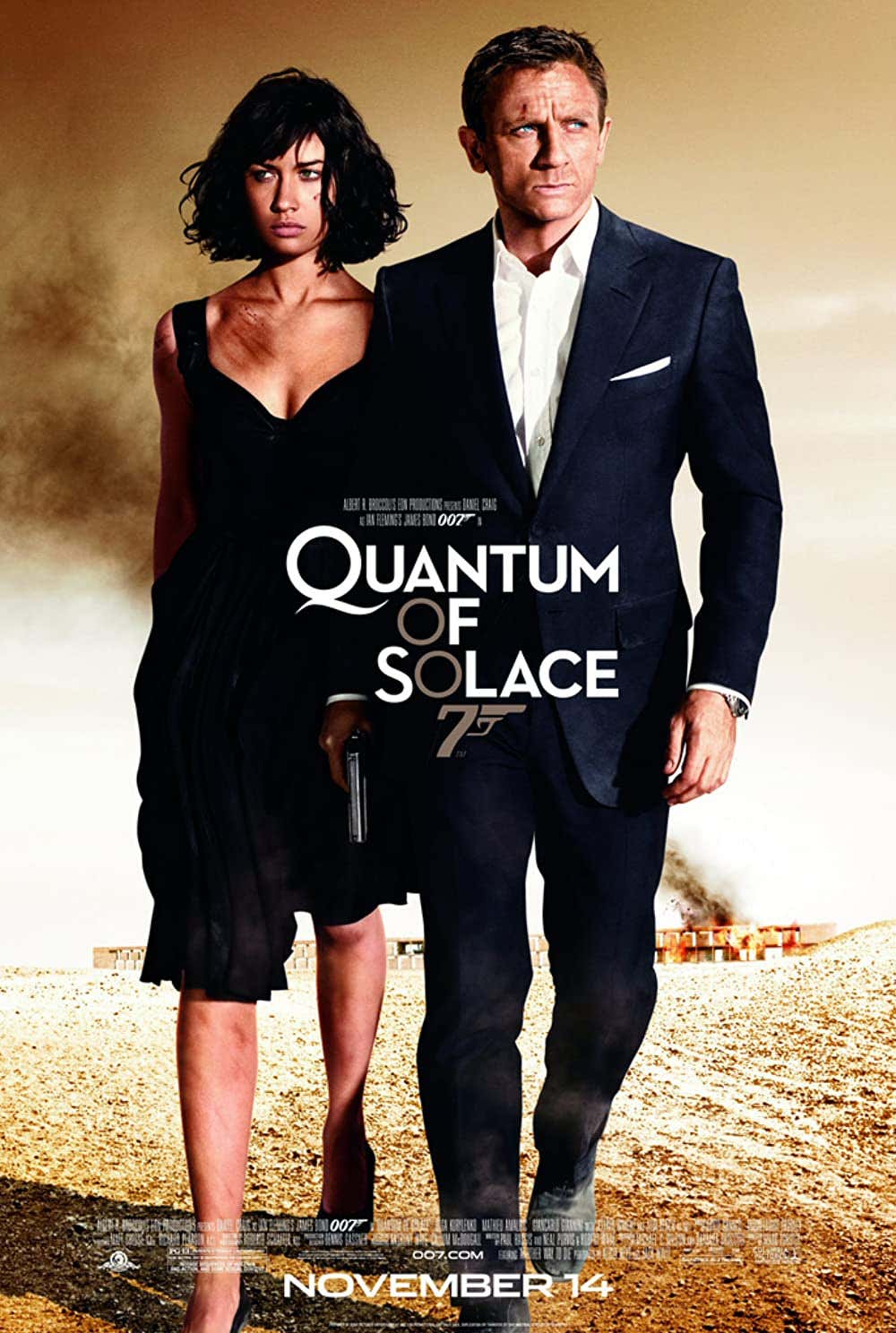 A couple of days ago I had the luxury of beginning my recap of the Daniel Craig Bond films by writing about one of my favorite movies, "Casino Royale." Now, we move on to the financially successful but underwhelming sequel, "Quantum Of Solace."

Released in 2008, one of the most incredible years of films years of all time, "Quantum Of Solace," the follow-up to the massively successful "Casino Royale" is a confusing film. I can't call it a terrible movie. Still, it's a film that feels rushed in many ways, and that's because it was. This movie was in production during the heart of the writer's strike in the latter part of 2007. That shows. Daniel Craig and director Marc Forster have admitted that they were rewriting scenes on set as this movie was in production.

Before I get into exactly what I think about this movie, it's worth noting that this film is structurally highly different from any other James Bond film that's ever existed. James Bond films from the beginning of time have essentially been anthology pieces. Every so often, a sequel refers to an event from the past. Still, for the most part, James Bond films have been meant to stand on their own. This movie and all of the Craig films following "Casino Royale" are the exception. It picks up about half a second after "Casino Royale" ends and constantly refers to the previous film. Daniel Craig has stated that this wasn't the original intention, but because of the writer's strike, all they could go off of was the "bare bones" version of a script penned in 2007.

Right away, one of the biggest problems that many other people and I had with this movie when it was released is that this James Bond film doesn't feel that much like a James Bond film. He never says "Bond, James Bond." He never orders a martini. You never even hear the classic theme until the end credits. The villain played by Mathieu Amalric, who in 2007 received critical acclaim for his performance in the foreign film "The Diving Bell And The Butterfly," is entirely generic and lacks the unique character traits that most great Bond villains seem to have.  I could be willing to ignore almost all of that, though, if the film had solid execution. But the biggest problem with this film is that it is remarkably unengaging. "Casino Royale" had a plot that bordered on confusing at points, but they did a pretty good job of streamlining the narrative. With "Quantum Of Solace," it seemed like what they wanted to do was interesting. It felt like the film intended to make a sequel based entirely around Bond's need for revenge following Vesper's death at the end of "Casino Royale." That's an excellent idea. The problem is that the first hour of "Quantum Of Solace" feels as though it cannot focus on that revenge plot for large stretches of the runtime. For reasons that are beyond me, oil and water are two main characters in the movie. The villain's completely dull motivations seem to be at the forefront for most of the film, which bogs the movie down. It feels like there was an attempt to have some pseudo-political message here, especially considering this film got released during the heart of the Iraq war, but even that doesn't work.

Despite how much I'm ripping into this movie, I can't say that I hate it. It's a monumental dud compared to "Casino Royale." Still, I find the last 45 minutes of this film to be much more focused and engaging, mainly because the relationship between Bond and Olga Kurylenko's character takes center stage. That aspect of the film works because it's something we've never really seen in a Bond film before. Neither one of these characters is motivated by love but rather revenge.

Craig is again remarkably convincing in this as a stone-cold killer on a mission. While his performance never once reaches the borderline Oscar-caliber heights of his performance in "Casino Royale," he still fits the role perfectly. His chemistry with Judi Dench as M is as good as ever. She's given much more to do in this movie, and for a good reason. I've always loved Jeffrey Wright as an actor, and I love how his character of Felix Leiter is given a more significant part in this movie. Honestly, I would've loved to see a film with the 2 of them on a globe-trotting adventure. Also, this movie does an excellent job of sticking the landing. I'll go as far as to say I love the last 10 minutes of this film. It puts an emotional, if not somewhat confusing, bookend on the events of "Casino Royale."

I saw this movie in theaters when it was first released, and I remember liking it quite a bit. Times have changed. I want to believe that I've developed critical facilities since I saw this movie for the first time when I was 13. To say this was a disappointing film upon rewatch is an understatement. There's plenty of people who like it, and in many ways, it fills its quota. There's nothing in it that is offensively bad, but throughout the entire runtime of this film, I couldn't help but be reminded of just how impactful I found so much of the action in "Casino Royale" to be. It's one of those rare action movies that sticks with you. "Quantum Of Solace" comes across as a much more standard, forgettable affair. Considering the writer's strike, I can't help but feel like this movie was a bit doomed from the start. It's not a movie I hate, but it's not one I exactly like either

See you next time for "Skyfall."