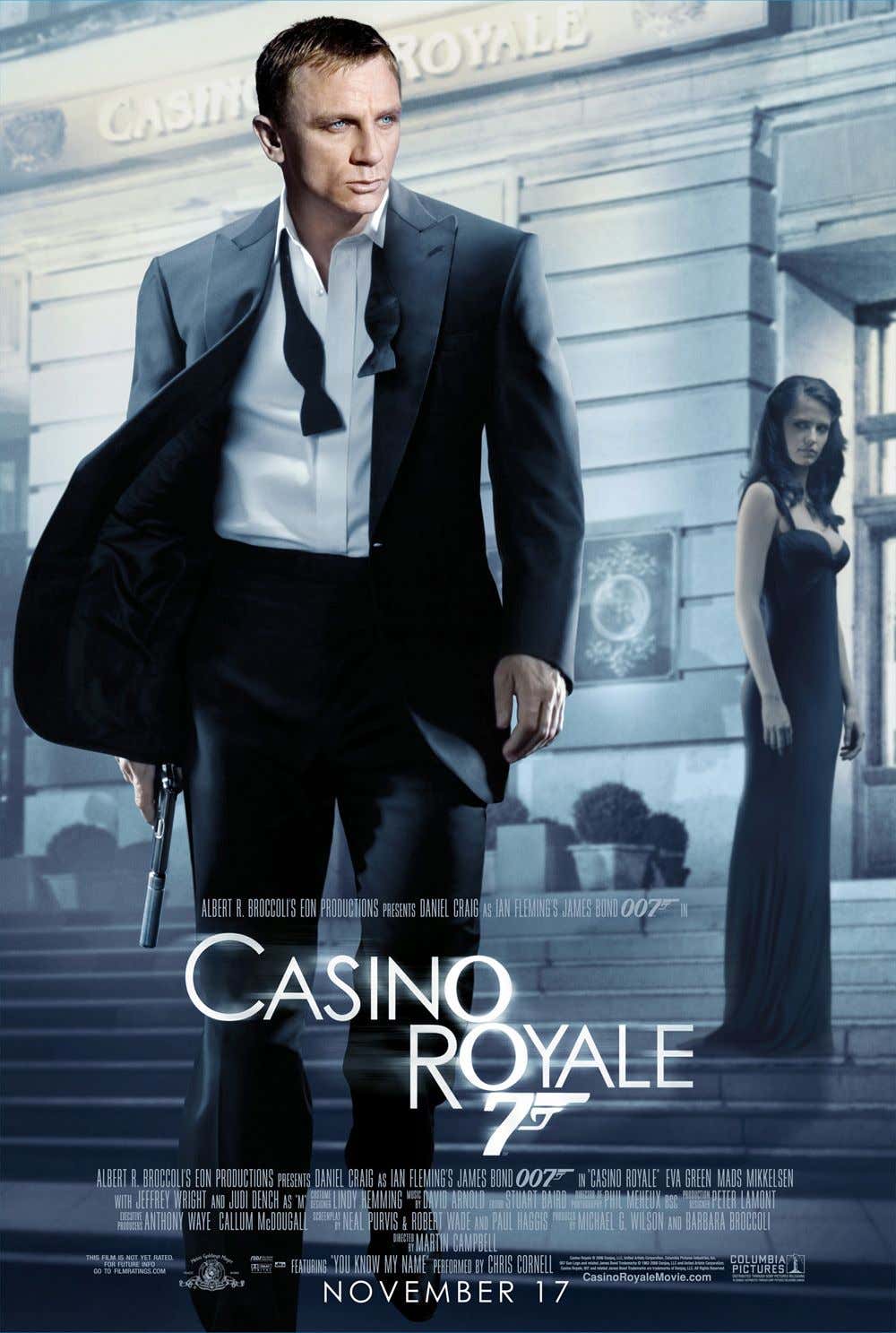 It has taken forever, but following a whole lot of delays, the final Bond film of the Daniel Craig era, "No Time To Die," is finally set to hit theaters on October 8th. I'm excited as hell. Daniel Craig is the James Bond that I've grown up with, and I'm very interested in seeing the conclusion of his version of the character. As much as I've enjoyed his portrayal of Bond, I realized that I hadn't seen any of his films in several years. So I figured now that I have some time on my hands to rewatch them again and blog about it, starting with the one that kicked it off, "Casino Royale."

"Casino Royale" kicks ass. It kicked ass when I saw it in fifth grade at Lansing Mall Cinema with my buddy Drew in November 2006, and it kicks ass 15 years later. I believe all films, in some capacity, are products of their time. Still, considering it's been 15 years since its initial release, it is pretty remarkable the "Casino Royale" feels like a movie that could exist in 2021. This movie is more than just a great James Bond movie. It's genuinely a great film. That's almost a complaint because there are those moments where it feels like this movie is too good to be a Bond film. It goes out of its way to avoid the clichés that bogged the franchise down in the past. Let me explain what makes it so great.

The first thing that stands out about "Casino Royale" is just how good Daniel Craig is as the character of Bond. His charisma is undeniable. This character has never ceased being awesome, but Bond in "Casino Royale" is next-level slick. Paul Haggis, the Academy Award-winning screenwriter who helped pen the script for "Casino Royale," seemed to go out of his way to make sure that Bond did or said something cool every two minutes in this movie. His actions, demeanor, and line delivery are so perfect that it's genuinely comedic that anyone ever thought this casting wouldn't work. It feels like it's the role he was born to play. "Cool" really is the keyword to describe this entire movie. Everything in it is just a little bit rugged, just a little bit rough, and a little bit gritty. It feels very grounded in reality. From the beautifully filmed opening sequence that leads to that completely bad-ass Chris Cornell anthem "You Know My Name" to the film's final shot, it's evident that everyone involved in this project knew what they wanted to do.

I think the thing that separates "Casino Royale" from other Bond movies, and honestly, most other action films in general is that it's genuinely a tragedy. Things do not go well for Bond in this film, and while there are other Bond movies, especially "On Her Majesty's Secret Service" that end in a rather tragic fashion, this one is one of the more dour films of the Bond canon. One of the key themes of this movie is heartbreak. And even though the audience, given their knowledge of the characters, has a pretty solid inclination that things probably aren't going to end well for Bond in this movie, you desperately don't want them to. A big reason for that is because Daniel Craig and Eva Green's chemistry is off the charts. Eva Green has had a very successful career playing many quirky roles. Still, I'm genuinely surprised she didn't become a megastar after this movie because she is genuinely great in this. It's their relationship that makes this entire movie work. One complaint that I've heard about Daniel Craig's portrayal of Bond is that he lacks personality and's a bit too cold. There's a reason for that, and it's because of the events that transpire in "Casino Royale." What happens between him and Vesper breaks him emotionally, and I feel that's carried over throughout his tenure as Bond.

This is not a flawless film. Several things about it are genuinely mediocre. I think the second act drags on far too long as we see a bit too much poker. The plot itself tends to get a little bit cluttered and confusing. The orchestral soundtrack is not as pronounced as it is in other Bond films. That's a minor complaint, but it's something that just bothered me a bit. Overall though, this is to James Bond what "Batman Begins" was to the character of Batman. It's the shake-up that this character desperately needed, and 15 years later, it holds up remarkably well. Please give it a watch.