Are you a fan of money, violence, and fun Friday nights? Well then join our RnR 13 contest on Play Barstool AKA picking the last 5 fights of the night to walk out of your living room as a $25,000 CHAMPION on February 5th.

At the very least someone is guaranteed to become $1,000 richer so there's NO reason not to use your free entry. Last PPV we did have a 10/10 winner (but since they worked for Barstool won $0) so it IS possible to be done. And where else can you pick a 4'3'' vs 4'5'' fight let alone Jose Canseco VS an intern? Start thinking through 5 matchup previews below LFG... 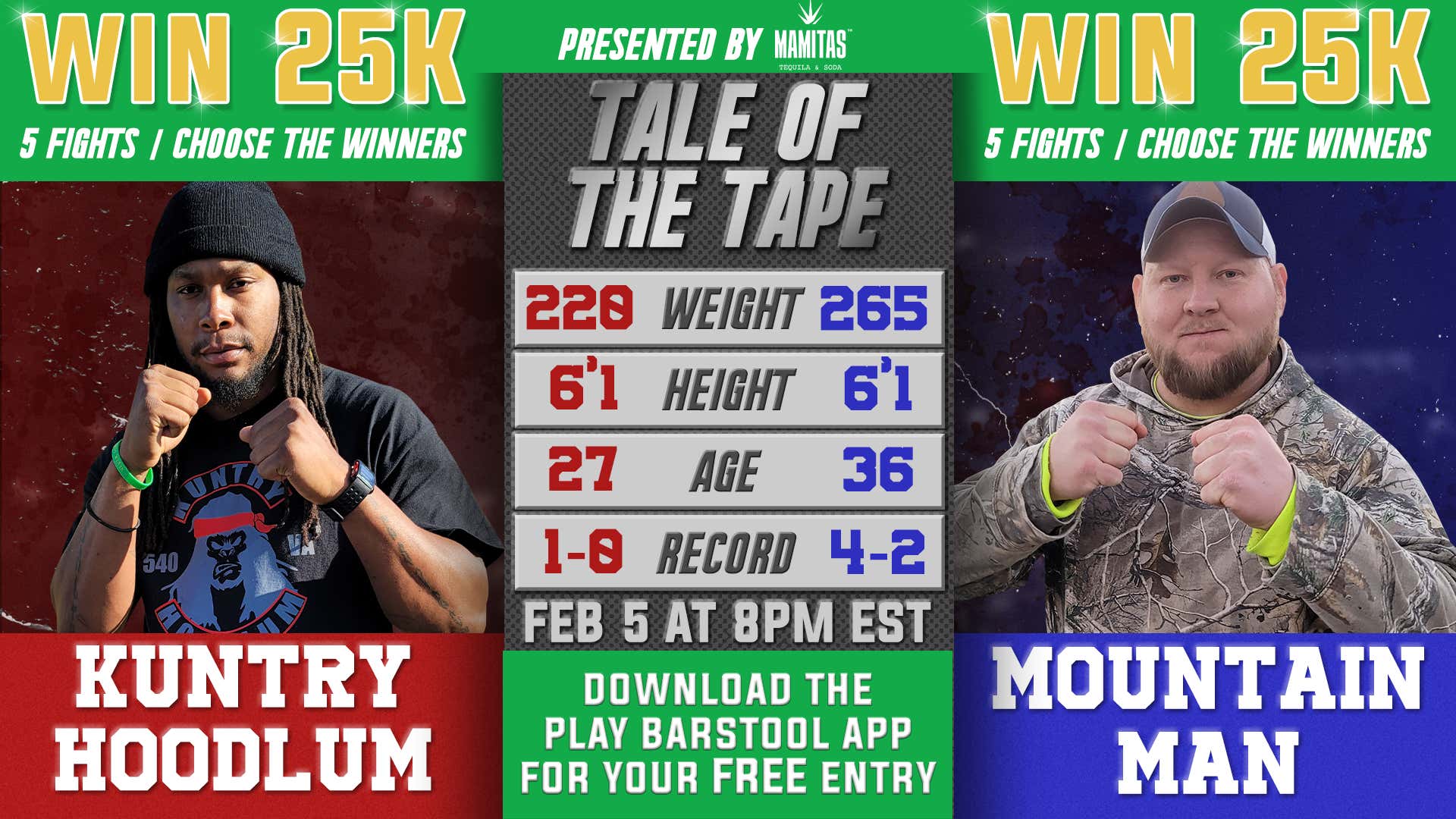 Kicking off our 5 Main Events is a #1 contender match for the HEAVYWEIGHT TITLE between a legend from the streets VS a legend from the mountains you may recognize. KUNTRY HOODLUM is only (1-0) at RnR but (10-0) in Street Beefs so he clearly knows his way around a brawl and has been very vocal about getting his shot at our belt.

Meanwhile Travis "JEANS" Turman hasn't fought since nearly having a heart attack at RnR 11, with rumors swirling he's been reduced to fighting in backyards and getting paid via hot dogs. No doubt there's still power in that right hand but can he return with ANY stamina here? Not so sure about that. Please don't hurt me. 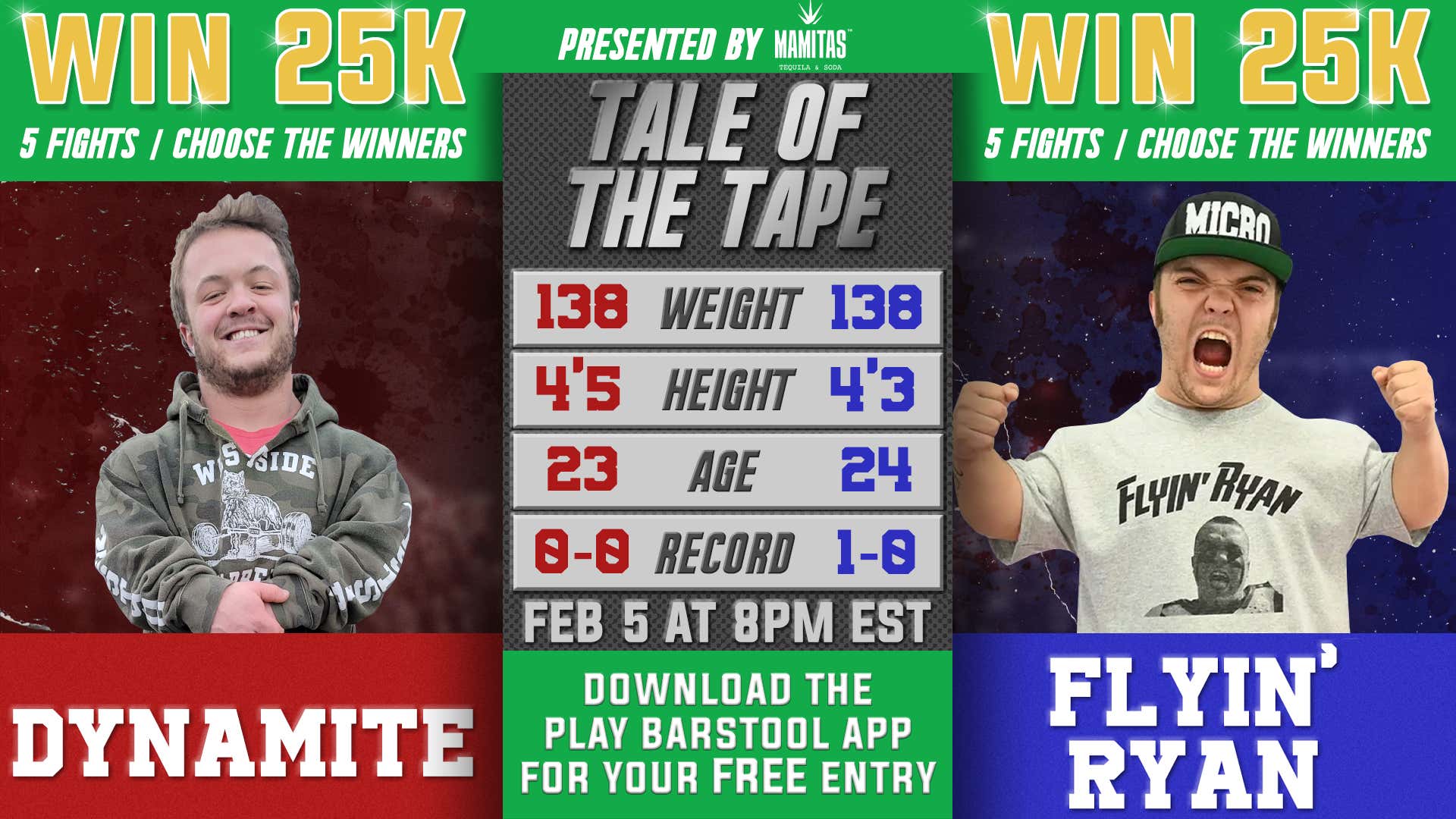 This matchup for the BMFM title (Baddest Mother Fucking Midget) has all the makings of a true slobber knocker. The challenger DYNAMITE is the strongest dwarf in the world at his weight class, squats 745 lbs + benches 505 lbs, and an absolutely ripped specimen. Don't let his quiet nature fool you, this dude moves weight and means business…

On the other side we have our current BMFM champion + pro wrestler FLYIN' RYAN, who really impressed at RnR 12 after unloading a flurry of fury directly onto the face of Smidge The Doorman every single round. This included an aggressive attack right after the opening bell and he's shown to be a savvy competitor who will take every inch of advantage he can. But will the lights be TOO bright being 2 inches lower to the ground? Quite possibly.

Prediction: DYNAMITE in 3 rounds by Decision

THE NINJA vs NIGHTY NIGHT 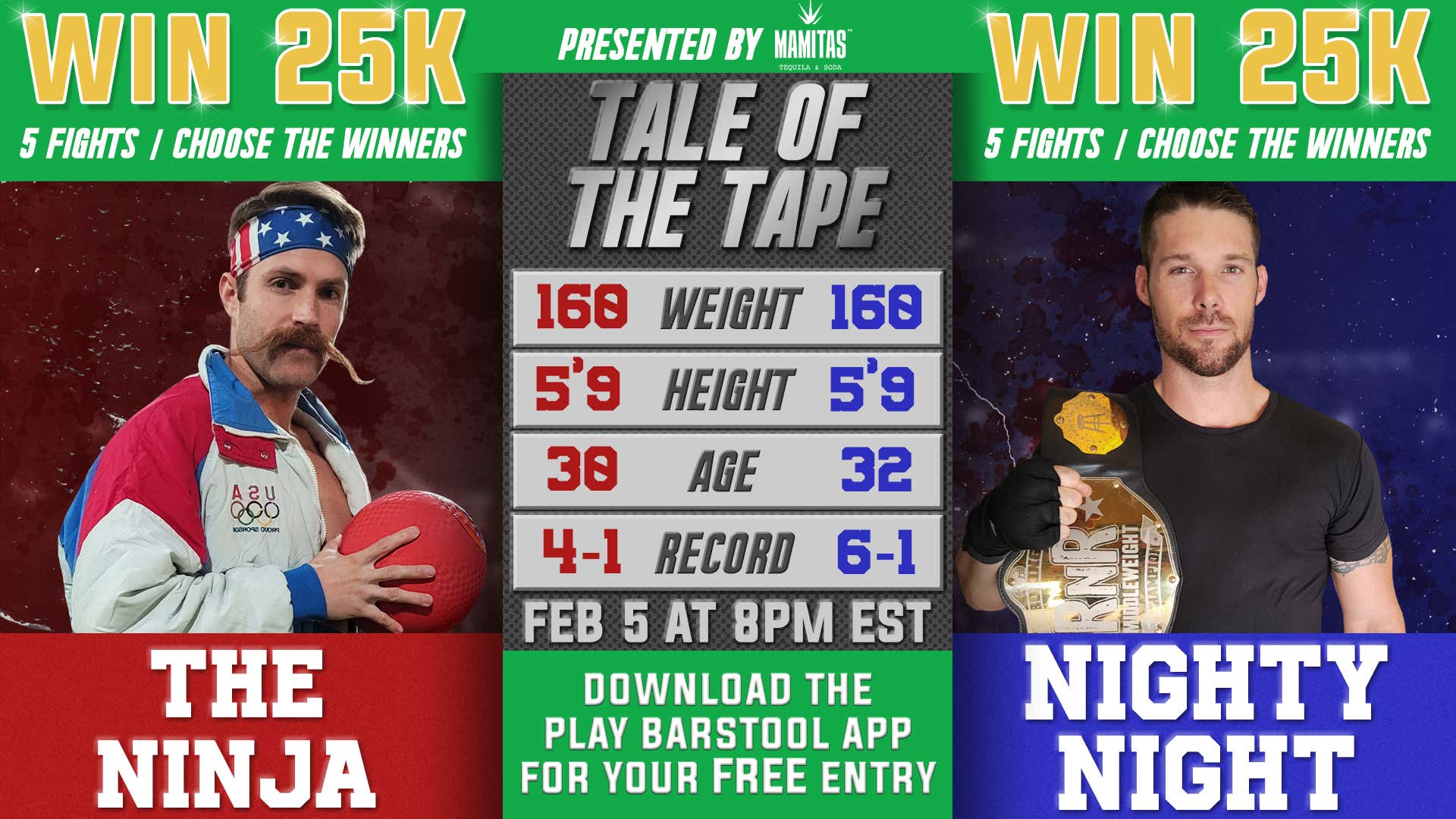 ALL-TIME rematch coming for the Middleweight title in this RnR 13 matchup. Back at RnR 9 these 2 warriors put on a beautiful bloody show, absolutely bashing faces into bolivian but also whilst wearing headgear. There will be NO headgear this time.  NIGHTY NIGHT came out on top after 3 brutal rounds and he's continued to be the greatest champion we've ever had. (6-0) as a Middleweight and was insane enough to move up 30 lbs to try and take down (3-0) LIGHTS OUT. He deserves all the respect.

THE NINJA has earned his fair share of respect too, not only pulling off the craziest backflip we've ever seen in a boxing ring but also proving he's a Middleweight that belongs with the elite fighters. He's coming off a win vs SHIZZAT THE RIZZAT and is one of the most ripped humans you'll ever see. Rumor is he's wearing a Goku outfit to the ring so, do what you will with that information. 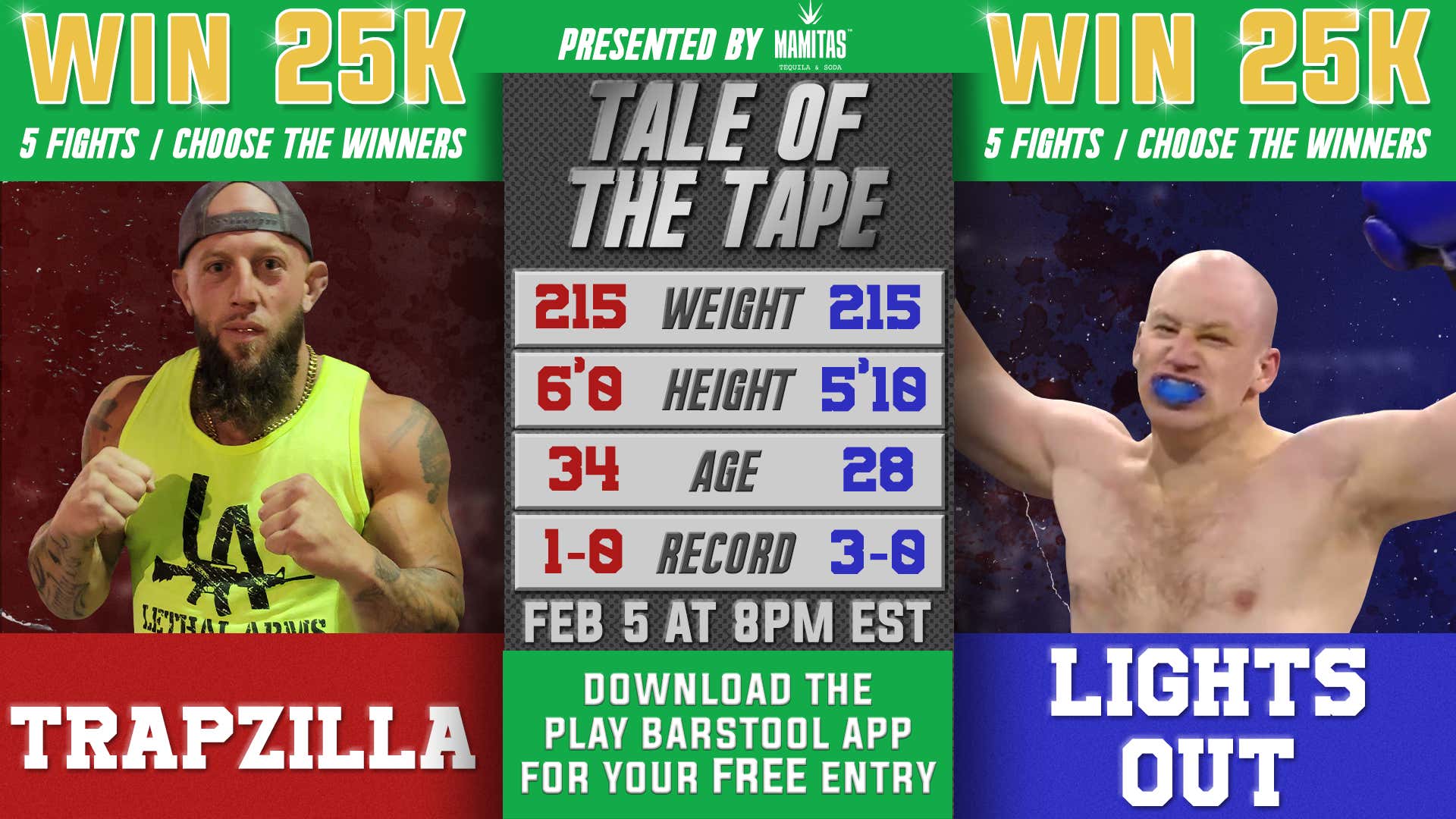 In our Heavyweight title fight we have the immovable object vs the absolutely immovable object with 2 absolute beasts going at it. LIGHTS OUT needs no introduction but I'm gonna give him one anyway. A (3-0) brawler who's taken down 2 of our greatest champions with ease, a loud mouth from the South Shore of Massachusetts who "doesn't give a flying fuck" about your traps. No one has hit harder, lasted longer, or run through our fight cards quite like him. And he's got memes to boot!

His challenger TRAPZILLA doesn't have the resume but he does have the traps and a huge reason to win. Child support payments are no joke and even as a male stripper he needs more cheddar so there's some real ass reasons for him to claim this belt. His KO at RnR 12 was unreal power and his confidence has been sky high, could he be the one to finally KO our #1? 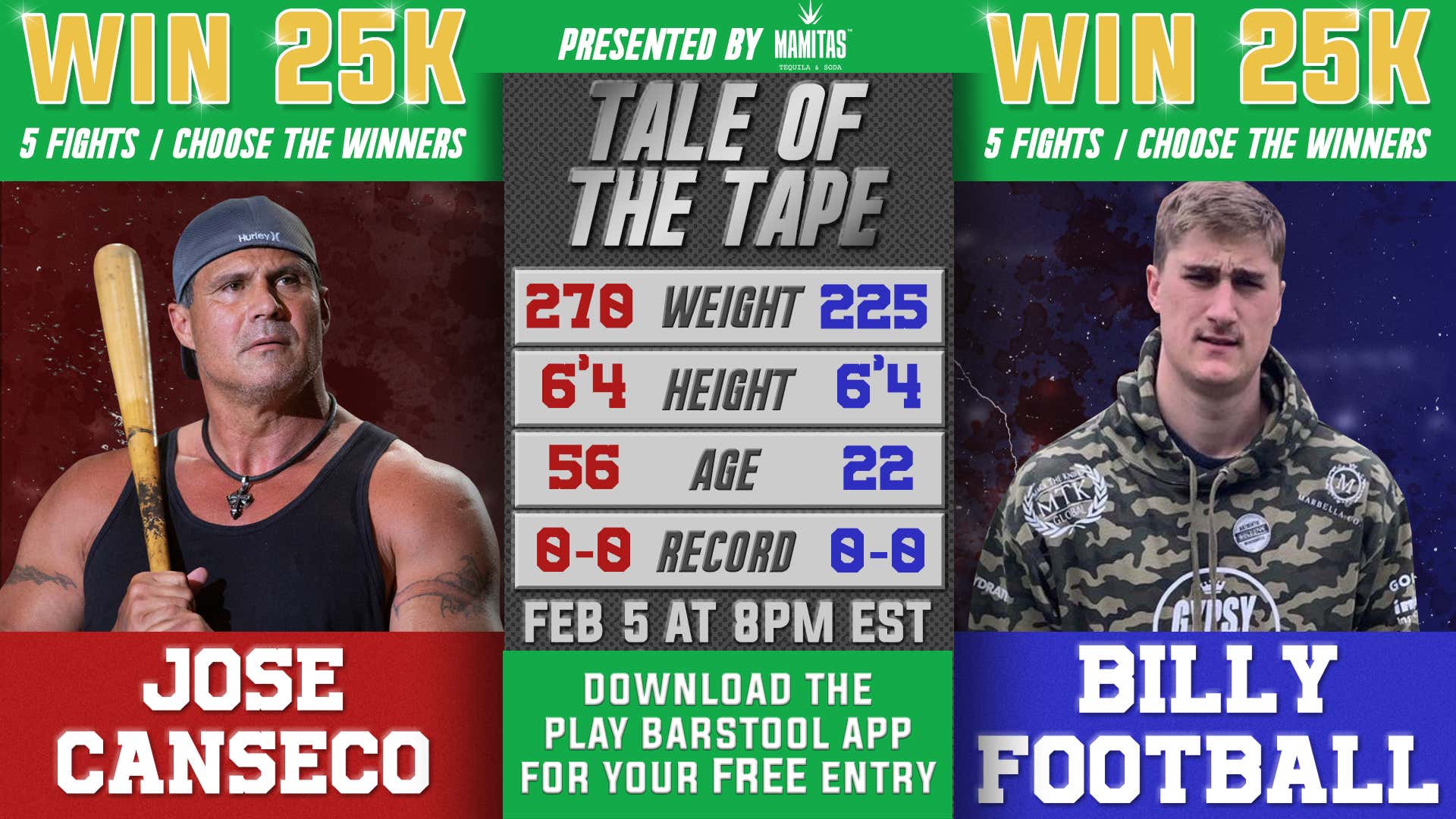 This is a matchup I truly do not know how to predict. For the first few weeks I was supremely confident in Billy, the past week I've come around on Jose. It changes every morning. Do you go with the youthful energy of Mr. Football or the grizzled wisdom of 56 year old Jose? Can Billy be fast enough to dodge those blows or is he getting a 270 lb knuckle sandwich off the opening bell?

Caleb has an A+ interview with Jose coming out on Thursday that should enlighten you more to his state of mind. I came away very impressed and honestly somewhat scared for Billy. But as Pardon My Take has said many times, they've never met someone with the drive + pure athletic ability as their intern Billy. He's dedicated everything to this since December and knows what's on the line. He wants to get Frank The Tank that date with Josie Canseco, he wants to make the baseball world whole again, he wants Jose to feel as much pain & punishment as humanly possible. Fingers crossed he pulls it off, cause wow that will really suck otherwise.

Head to PlayBarstool.com now to make your picks and the tune into BuyRnR.com on 2/5 at 8 pm for every fight, ring girl dance, Dave Portnoy + Dan Katz commentary AND MORE 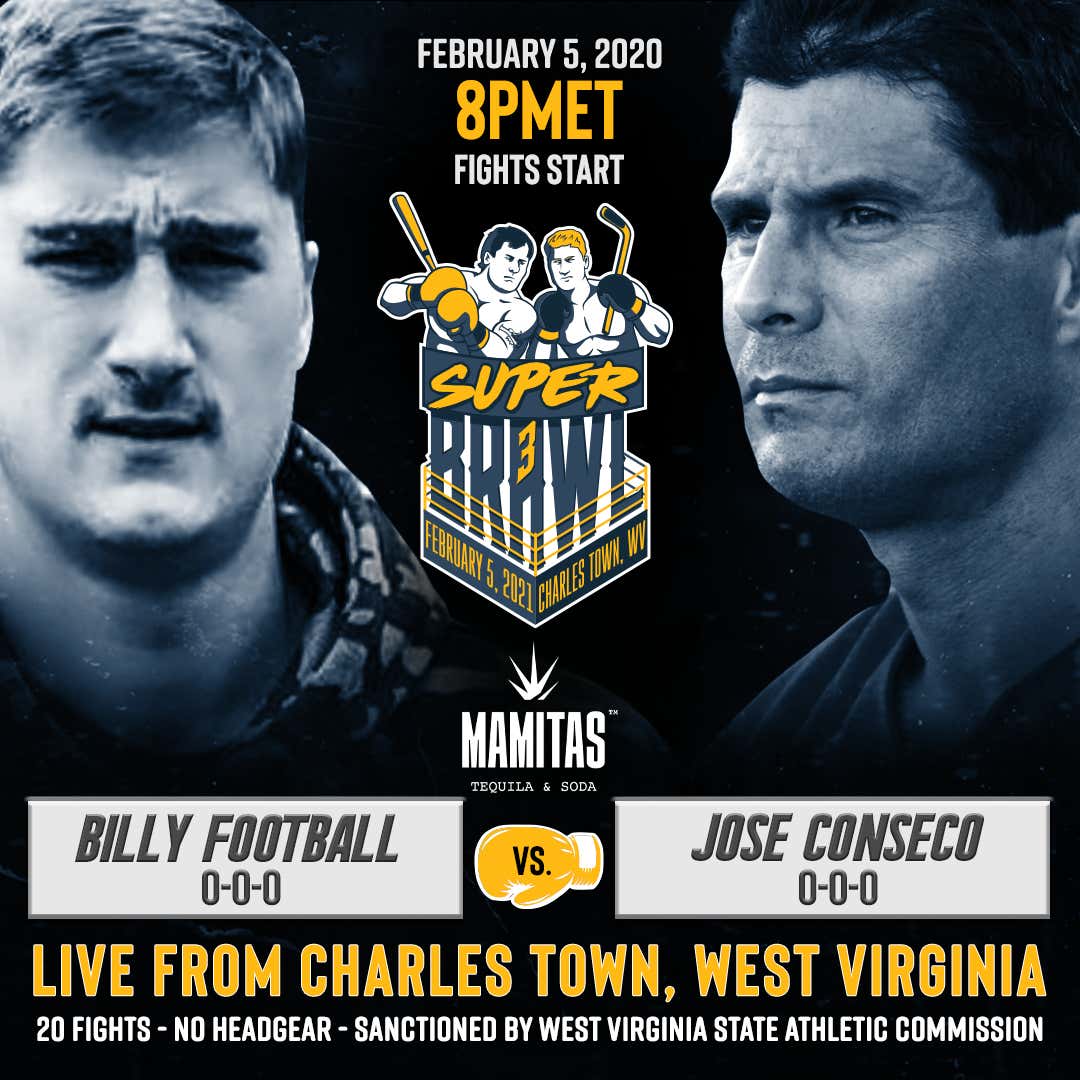