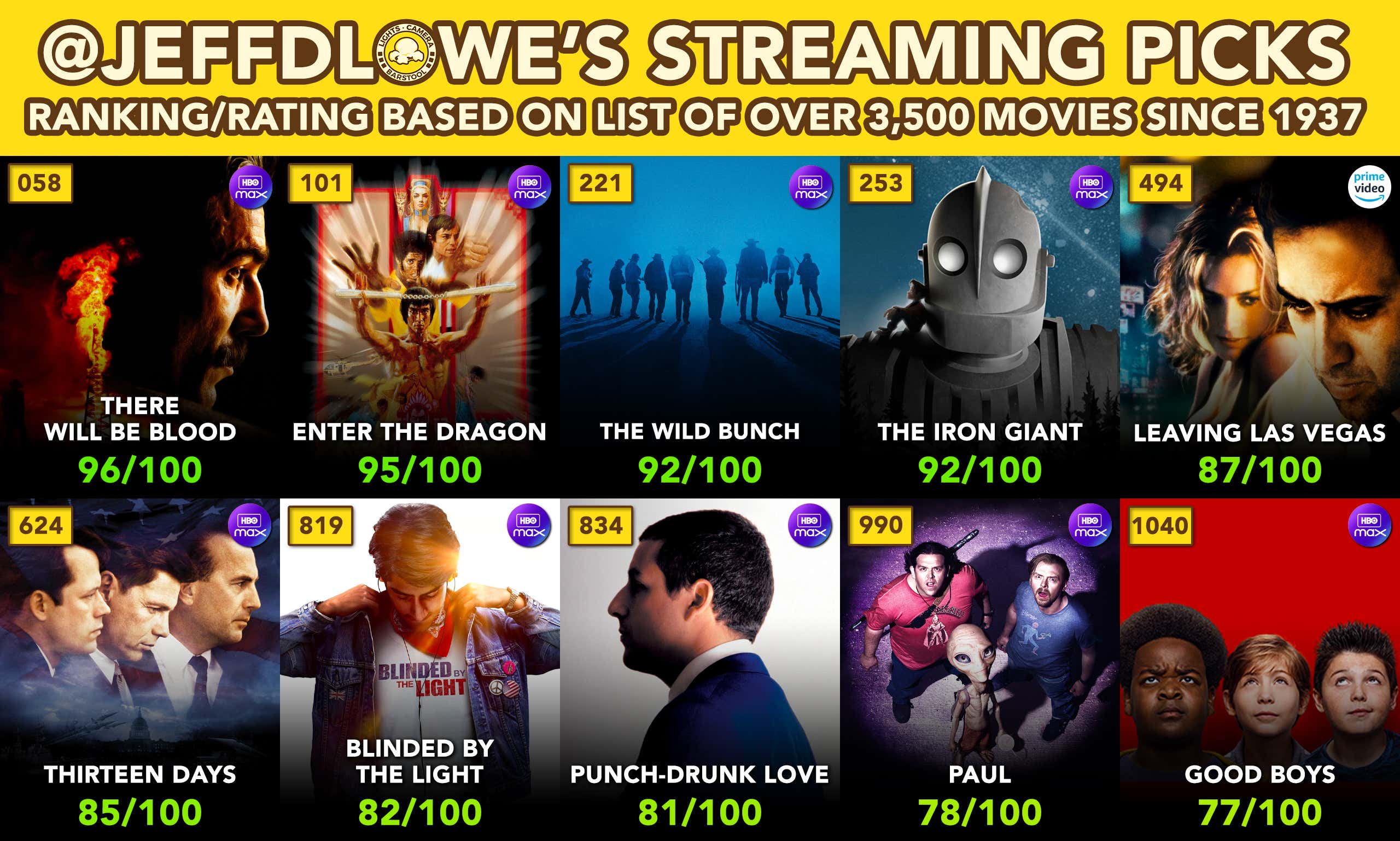 My list now expands past 3,500 movies and to the year 1937: I have been working on (still am) a project to get all of my movie ratings onto a website. Since I have been watching movies my entire life, I decided to go back and backlog movies from years, and years before 2006, when I started logging my ratings. So now my list is expanded, and I can dip into those ratings and rankings for streaming suggestions. The website will be coming soon…

58) There Will Be Blood (96/100) - HBO Max: The first of nine HBO Max movies and two Paul Thomas Anderson movies on the list, 'There Will Be Blood' has what might very well be the single greatest performance in cinematic history.

Day-Lewis is nuts. He is as method as they come when it comes to acting and, despite being a famous person, he still takes the subway in New York. But that's what makes him so fucking great. The performance lifts an already incredible drama to unimaginable heights thanks to the insane portrayal of Daniel Plainview.
--

It's just a fucking awesome movie, plain and simple. Together, it is both entertaining and a great movie. There isn't anything with 'Enter the Dragon' that feels phony or cheesy, it's as good as it gets with the genre of Kung-Fu. The rare combination of a movie that has the fun of a popcorn flick, but the quality of a classic.
--

I love the new Neo-Western era as much as the next movie fan, but this right here is what you get when you want a classic Western movie. It's a wild ride and will make anyone unfamiliar with these movies from the 1960s a little more aware at the scale and presence of this genre. As a whole, the Western genre isn't what it used to be, but 'The Wild Bunch' is quintessential Western Action, and another reason I love the diverse library on HBO Max (not a free ad… remember, I am a Disney shill).
--

253) The Iron Giant (92/100) - HBO Max: When it comes to the best animated movies, 'The Iron Giant' is always a movie people bring up last second and remember how great it is. With that said, I also feel as though most people haven't watched it in a while?

Guess what? It still holds up. Toss it on. Young, or old, you'll still love this classic.
--

While his role in 'Leaving Las Vegas' isn't my favorite in his career, there's a good argument for saying it is his best…

Yup. For those unaware, this is the movie that won Nic Cage his Oscar statuette. It's been nice to see Cage find a perfect lane the last few years to place his chaotic acting style with movies such as 'Mandy', but I know he still has another award-winning performance in him somewhere. One day…

624) Thirteen Days (85/100) - HBO Max: This movie just oozes Kevin Costner. He was born role a movie and political thriller like this movie. The jobs done by Bruce Greenwood and Steven Culp as the Kennedys are also great, especially the West Wing alum Culp.

I'll always give movies a ton of credit for being suspenseful when you already know the outcome of their incredibly well-known historical storyline. 'Thirteen Days' does just that.
--

819) Blinded By the Light (82/100) - HBO Max: One of a few movies with a soundtrack based around famous musicians from 2019 ('Rocketman', 'Yesterday'), the Bruce Springsteen movie 'Blinded By the Light' really flew under the radar.

Even if you aren't a fan of the music of Bruce Springsteen, the style of this musical movie is an absolute blast. Its corniness can be distracting at times, but that is also where a lot of the charm comes from with 'Blinded By the Light'. Sometimes you can set aside the fact a movie feels familiar and predictable when it also delivers a damn good time. 'Blinded By the Light' is a lot of fun, will leave you feeling great, and incorporates the music of Bruce Springsteen in an incredibly engaging way.
--

834) Punch-Drunk Love (81/100) - HBO Max: 'Punch-Drunk Love', up until the release of 'Uncut Gems', was always the movie I referenced (along with many other people) when it came to discussing Adam Sandler's acting skills.

The dramatic acting is there, but not at the expense of Sandler's ability deliver humor at a high level when given the right script and vehicle. Add that with the presence of Philip Seymour Hoffman, one of the best to ever live and act, and Paul Thomas Anderson in the director's chair, you get a really well-made movie that has held up over the years. It's rough around the edges and has faults, but Thomas Anderon's vision pokes through and results in a movie that has always been an enjoyable re-watch for me.
--

990) Paul (78/100) - HBO Max: I feel like 'Paul' is a funny comedy for most people, but especially big dumb nerds like myself. While there is no involvement from Edgar Wright, it still feels a bit like a Three Flavours Cornetto Trilogy movie with the lead roles filled by Simon Pegg and Nick Frost.

'Paul' has a great mix of nerd-fandom comedy from the likes of Seth Rogen, Pegg, Frost, and more (including Bill Hader and Joe Lo Truglio), as well as a few twists and turns that make it a fairly engaging story. This is also one of the most Robbie Fox-ass movies (along with 'Fanboys') of all time.
--

Again, I'll say this, the movie isn't perfect, but it delivers more than enough laughs. There has been a very obvious lull in classic comedy movies over the last 10 years, so it was great to see 'Good Boys' breakthrough the muck and deliver a hilarious movie. Not all of the jokes land and, despite the comparisons, it doesn't quite have the timeless feel that 'Superbad' did right from the start, but there are plenty of hilarious moments. I would've given this movie an even higher score had they focused a touch less on the odd drone subplot that felt fairly unnecessary. Making young kids cursing funny and not cheap is no easy task, so I commend everyone involved with making a naturally funny movie.