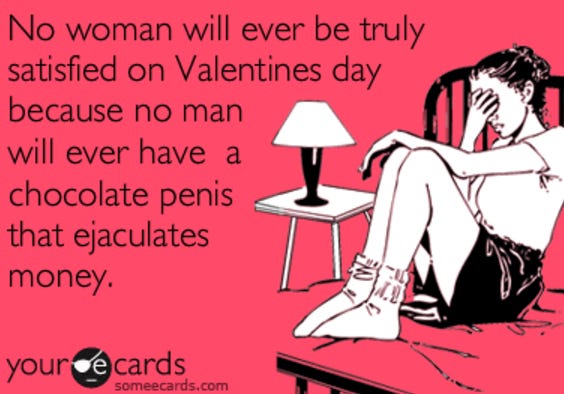 Refinary29 – We might think of Valentine’s Day as an occasion for chocolates, candlelit dinners, and adventurous new tricks in bed. But according to an epi24 study, many women would prefer to Netflix-and-chill. A good deal could even live without the chill part — especially when they’re not getting as much out of it as their partners. The sex toy company surveyed 400 American women during December of 2016. 44% of them didn’t expect to celebrate with any presents or romantic meals. In fact, of all the holidays, 41% of women in relationships dread V-Day the most.

WOW. And 41% of them “Dread” the holiday? Where are these unicorn women? Because there’s zero chance they exist in this reality. Cause if they did you lucky dogs can return those $300 diamond earrings and the roses that were marked up 450% cause your lady is content with a hug and a wish! If this isn’t the biggest crock of horseshit in the history of mankind then I don’t know what is. This hypocritical happycrap is EXACTLY why I had an absolute conniption during the last Swipe Drunk Love. 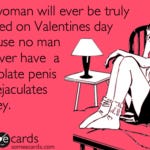 There are three certainties in life: Death, taxes and all women in relationships expect something special on February 14th. If you’re with a lady and give a gift on Valentine’s Day that costs no money you will be either dumped on the spot or your cock will be forced into early retirement. Just pack up your balls or take off the condom and hang it from the rafters. There’s no way in hell that would ever fly for this made up holiday of one-day love. Oh, you want to do get them something very worthy like a cute dinner and some decent jewelry? A flawless plan. That is until they discover their slut friend being slayed by some Wall Street dick was taken to the Four Seasons and got Tiffany’s. It’s never good enough. The only women that would be satisfied with a thoughtful, romantic gesture instead of something expensive are those who are either lonely as shit or are fat as fuck and would settle for anything, including some Milkbones dipped in syrup.

The sad part is I can 100% see almost all of women saying they would not only be fine with, but rather choose something simple and meaningful over monetary items. Why? Because most women try to make themselves look all righteous and moral cause they for some reason care about what others think of them constantly, even in an anonymous survey. Because there’s no way in fuck that .00001/10 women believe what they’re saying let alone 90% of them. Sly cunts they are. All of them.

PS – February 14th is one week away. I’m still thinking about declaring war on this hypocritically horseshit Hallmark “Holiday”, but have to come out HOT. All I need is a superb #hashtag as ammo to fire from the cannons. Any suggestions are more than welcome.

Can The 'Strokes Gained' Statistic Knock 51 Strokes Off Of My Golf Game?

Barstool's #CollegeGamingChampionship Is Down To The Electric Eight - Who Is Coming Out On...